Delaying the rollout of new tariffs to avoid peak retail shopping seasons may be a sign that President Trump is planning for his tariffs to stay.

President Trump’s on-again, off-again tweets about new tariffs on Chinese imports have been dizzying. They have generated turmoil in financial markets and understandable confusion among consumers. Some clarity was introduced on August 13, when the administration officially released its plan for new tariffs to take effect in stages this fall and winter.

The plan is to impose new 10 percent tariffs on $112 billion of Chinese imports starting on September 1. That will then be followed by a second round of duties on a different set of products, covering $160 billion of imports, on December 15. The bottom line is that, for the first time, Trump’s trade war is likely to directly raise prices for a lot of household budget items like clothing, shoes, toys, and consumer electronics.

Obviously fearful of the economic and political fallout of these tariffs, Trump plans to delay them until after the peak in imports associated with American retail shopping seasons. Slapping duties on tens of billions of dollars of smartphones, smartwatches, and video games on December 15, for example, means the tariffs will miss the traditional surge in import deliveries that arrive at the docks in October in time for the holiday season.

Here are five things you need to know about these next two rounds of tariffs.

1. During the trade war, US tariffs on China have continued to go up

Trump’s latest escalation will drive up the average US tariff on Chinese imports from its current level of 18.3 percent to 20.0 percent on September 1. The tariff will then ratchet up to 21.4 percent on December 15. This follows on Trump’s imposition of tariffs that started in January 2018 and continued through May 2019, covering over $250 billion of imports from China alone. [1] 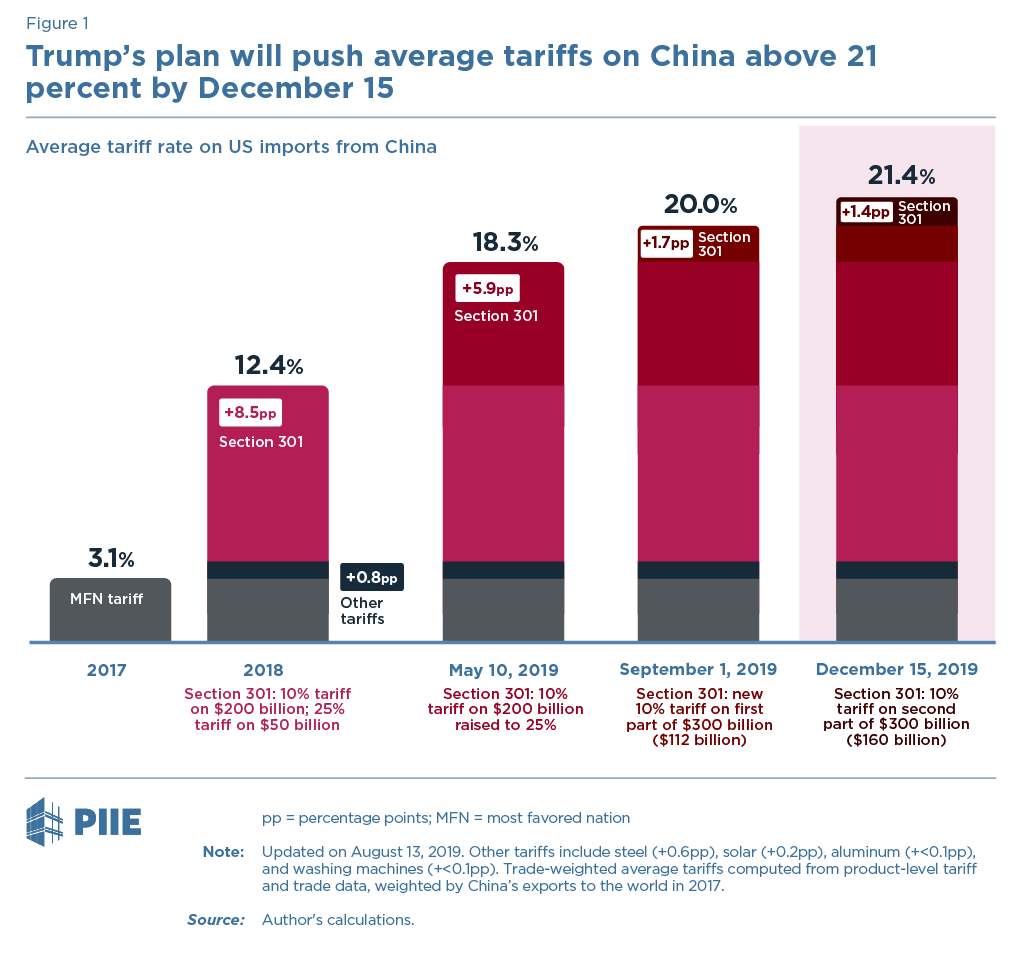 In the span of less than two years, Trump will have increased the average US tariff on imports from China by over 18 percentage points, from its pre-trade war starting point of 3.1 percent.

Trump tweeted more than three months ago that he would “shortly” impose new tariffs on the remainder of imports from China that, at the time, remained untaxed. After that tweet, the United States Trade Representative (USTR) circulated a list of proposed products to fall under the new tariffs—referred to as the “$300 billion list”—that covered about $274 billion of imports from China in 2018.[2] These products were subject to public hearings on June 17–25, 2019, conducted under Section 301 of the Trade Act of 1974, which authorizes the use of tariffs to retaliate against a trading partner’s allegedly unfair trade practices.

On June 29, Trump briefly put on hold the tariffs he had announced in May. He tweeted a temporary truce after meeting with Chinese president Xi Jinping at the G-20 summit in Osaka, Japan. But it was short lived. On August 1, Trump reversed course again and indicated new tariffs would go into effect starting September 1.

The August 13 announcement spells out the details. It will result in new tariffs on September 1 ($112 billion list) and December 15 ($160 billion list). Furthermore, $2 billion of products—including bibles, child safety seats, and cod—from the $300 billion list will not be hit with new tariffs.

2. The September 1 tariffs will directly affect many consumer goods for the first time

Trump’s September 1 duties will hit $112 billion of imports that had not previously been directly targeted. Footwear, clothing, and textiles constitute more than a third of the value of the new targets. Most US imports of clothing and shoes from China had been spared thus far (figure 2). 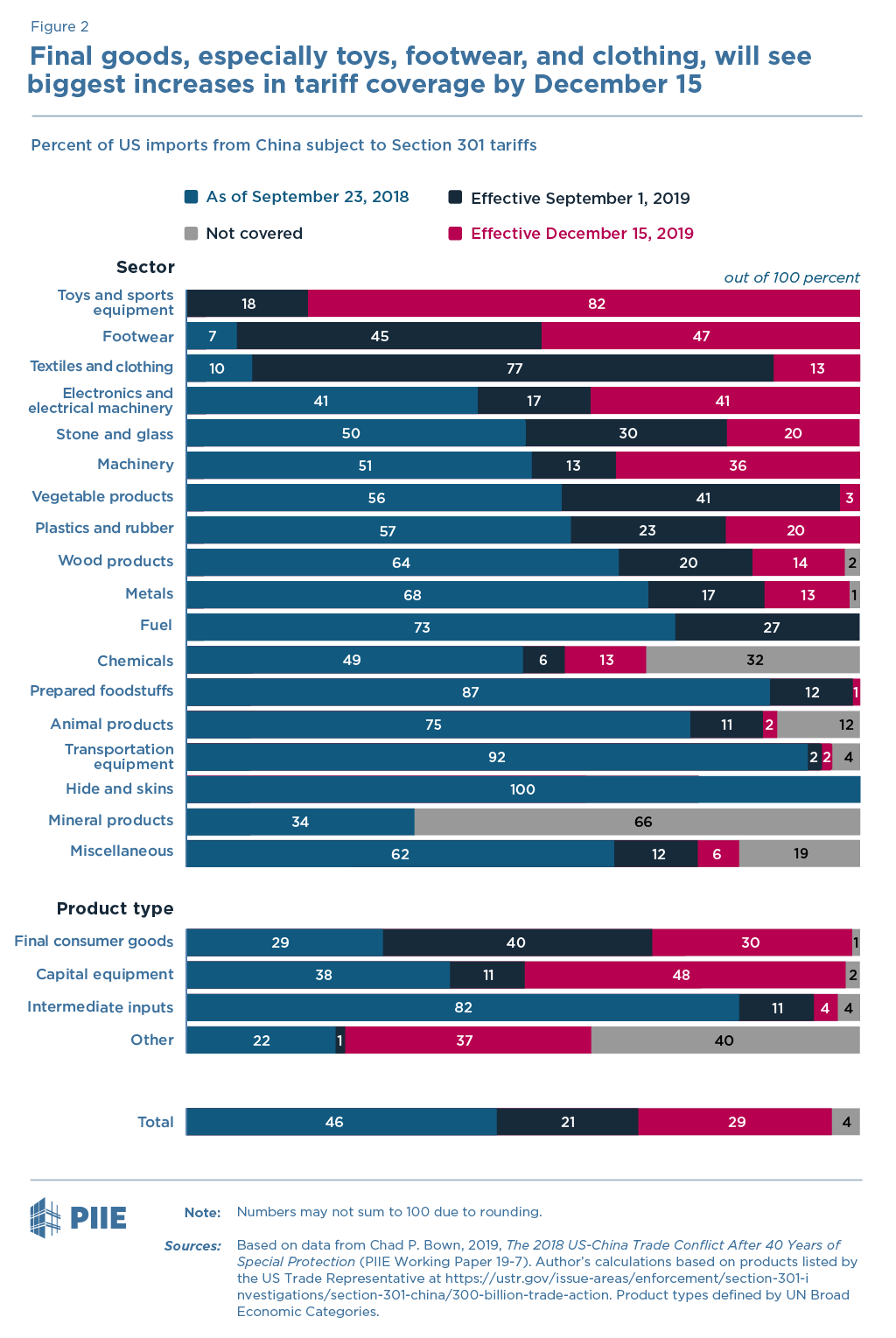 The September 1 action changes that considerably. The share of Chinese imports of textiles and clothing hit by Trump’s tariffs will suddenly jump from 10 to 87 percent. And for footwear, the coverage of Chinese imports will increase from 7 to 53 percent.

The increase is not limited to clothes and shoes. While earlier Trump tariffs hit only 29 percent of all consumer, or “final,” goods imported from China, the September 1 duties expand that scope to 69 percent. Overall, Trump’s tariff reach is growing.

The typical effect of an import tariff is to raise prices. For imported inputs like semiconductors or steel, these taxes mean higher costs for American businesses that use them to then provide other goods and services. Because Trump’s tariffs to date have focused on these imported parts, the main impact on the US economy has arisen through American companies finding it more difficult to compete with firms in other countries that do not face these tariffs on their inputs. And different US firms react in different ways. Some pass along the higher costs to end consumers in the form of higher prices. Others choose to earn lower profits, or to cut costs elsewhere, including by keeping wages low.

The channels through which the US economy is affected by Trump’s tariffs may change with the September 1 duties. Imposing tariffs directly on consumer products may mean that households see price increases even more quickly than has been the case thus far.

3. The December 15 tariffs will directly hit a lot of consumer electronics and toys for the first time

The product coverage expands again on December 15, when Trump’s next round of tariffs goes into effect. Those duties will hit an additional $160 billion of previously untouched Chinese imports. More than two thirds of the value of products on that list include mobile phones, smartwatches, video game consoles, computer monitors, and Christmas ornaments.

Starting on December 15, US companies will find that 100 percent of their imports from China, in nearly all product categories, are being targeted by Trump’s tariffs.

4 . The timed rollout of these tariffs may be to avoid this year’s retail shopping peaks

The timing of these next two rounds of Trump tariffs suggests they are designed to wait out some of the big surge in this year’s retail purchases. The sharp increase in imports is traditionally driven by the back-to-school and winter holiday shopping seasons.

Take first Christmas and other December holidays. October is a pivotal month for US importers stocking up on toys and consumer electronics for November’s Black Friday and Cyber Monday, two of the biggest retail and online shopping days of the year.[3] Coincidentally, October also happens to be the peak import month for the products on the December 15 tariff list (figure 3). The administration may hope that imposing tariffs on those products only after the typical October surge has already cleared customs will delay some of the consumer backlash arising because of the tariffs’ toll on their pocketbooks. 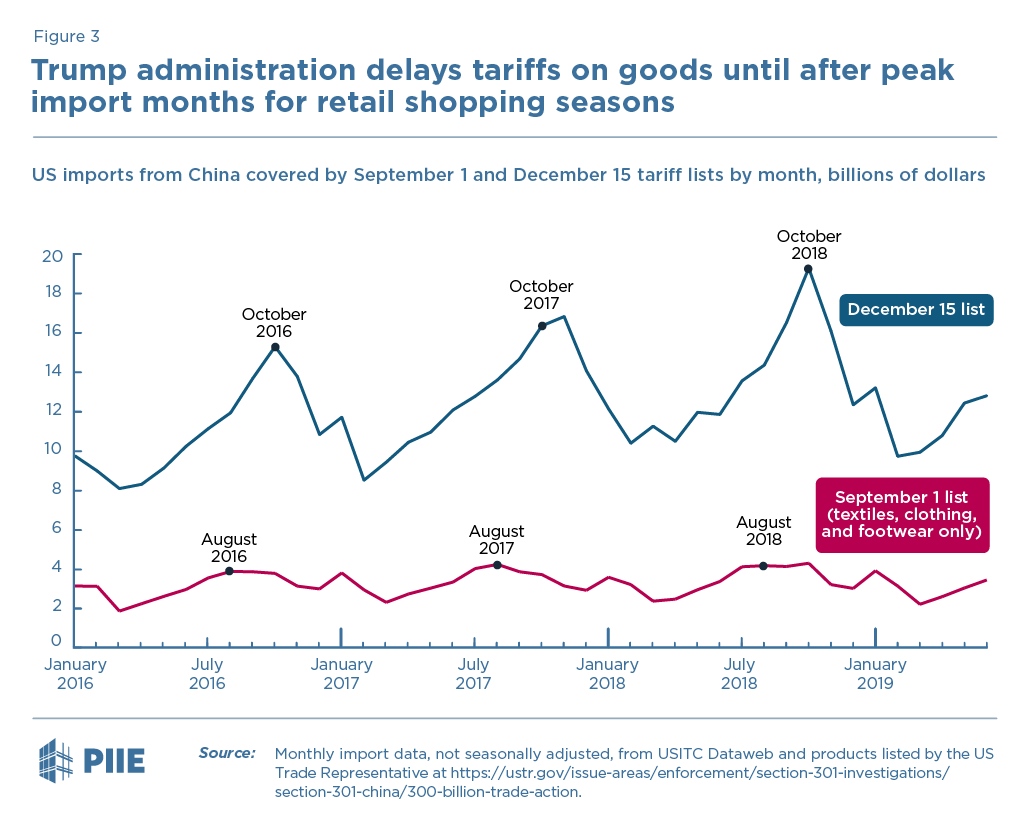 August also turns out to be the peak import month for the clothing, textile, and footwear items on the September 1 list (see again figure 3). If tariffs on those products had gone into effect in early July, thereby hitting the import surge that happens each year at that time, retailers may have had to suddenly hike prices during the back-to-school shopping rush. The president’s June decision in Osaka to delay tariffs avoided that potential crisis.

5. Starting December 15, almost all US imports from China will be covered by Trump’s tariffs

Trump’s trade actions in 2018 increased the tariff coverage to more than 50 percent of US imports from China by September 23 of that year.[4] New tariffs in 2018 alone resulted in a coverage of trade protection unmatched over the last 40 years (figure 4). 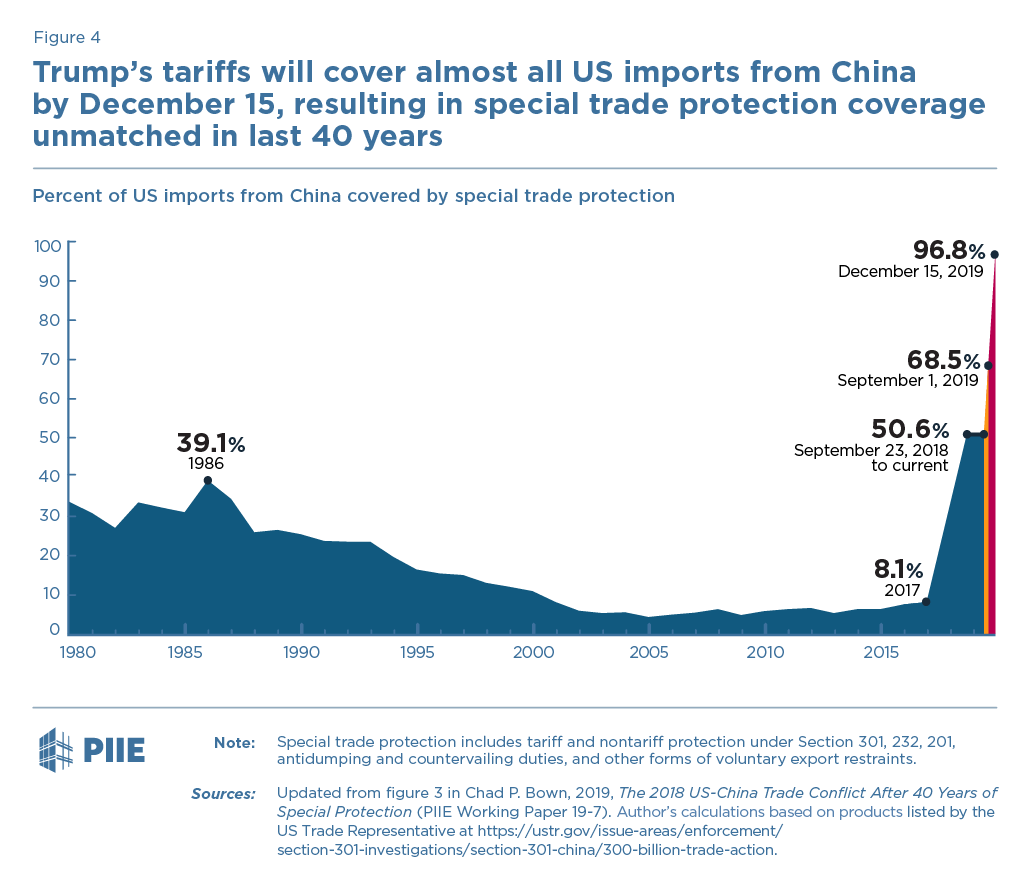 These next two rounds of tariffs will nearly double the coverage of affected products. The September 1, 2019 tariffs on $112 billion of Chinese imports will increase product coverage to 68.5 percent of all US imports from China. And the 10 percent tariffs on another $160 billion of new products on December 15 will result in 96.8 percent of US imports from China being affected by Trump’s extra tariffs.

Despite the record of flip-flopping on tariffs in the last few months, all signs point to Trump following through on these next tariffs on Chinese imports. Unlike his other recent threats to Mexico and on autos, the evidence on China actually points to follow-through. Somewhat surprisingly, this includes even the most dubious campaign promise of officially designating China a currency manipulator. He made good on this threat on August 5, flying in the face of the fact that the country has not intervened to lower the value of its currency in years.

There is no good news in these tariff announcements. The only minor consolation comes in their timing. By putting off the next two rounds until the import surges have already arrived to stock this year’s back-to-school and winter holiday shopping seasons, President Trump may be coming around, albeit belatedly, to the economic evidence on the costs of his trade war. Thus far, it is American consumers and companies—and not China—who are bearing the burden of his tariffs.

But with that interpretation comes a major additional concern. Rolling them out in a way that recognizes their costs may mean that Trump is also planning for his tariffs to stay.

1. In May 2019, Trump increased tariffs from 10 percent to 25 percent on $200 billion of imports. No new products were covered by that tariff increase, implying the products covered by Trump’s tariffs remain unchanged between September 23, 2018, and September 1, 2019.

4. These estimates do not yet include temporary exclusions that USTR has granted to the Section 301 tariffs.

The data underlying this analysis are available for download here [xlsx].