After spending 2018 imposing tariffs on over $360 billion of each other’s trade, the United States and China are now negotiating how to resolve President Donald Trump’s trade war. The talks reportedly cover subsidies, intellectual property protection, and new methods of enforcement. They may also result in China directing its state-owned enterprises to buy more American goods and services.

But what about all those 2018 tariffs? Recent media reports suggest the duties may not be removed—a matter of concern in the business world—even if there is a US-China deal. Given the historical magnitude of the trade protection, as well as the types of goods that each side deliberately targeted, their economic implications would remain important.

Here are five things you need to know about the US-China tariffs of 2018.

1. US special protection toward China is not new, but it now covers more imports than at any point since the 1980s.

Trump’s tariffs on $250 billion of imports from China grabbed headlines in 2018, but China’s exports were already affected by four other sets of US special tariffs imposed over the year, including on steel, aluminum, solar panels, and washing machines. Combined, over 50 percent of US imports from China became subject to special US trade protection by the end of 2018.

The Trump administration’s actions were noteworthy not only because they were imposed unilaterally but also because they were so sizeable. While the United States has imposed special protection on imports from China for decades, the long, historical view shows the enormous scope of the 2018 tariffs (figure 1). 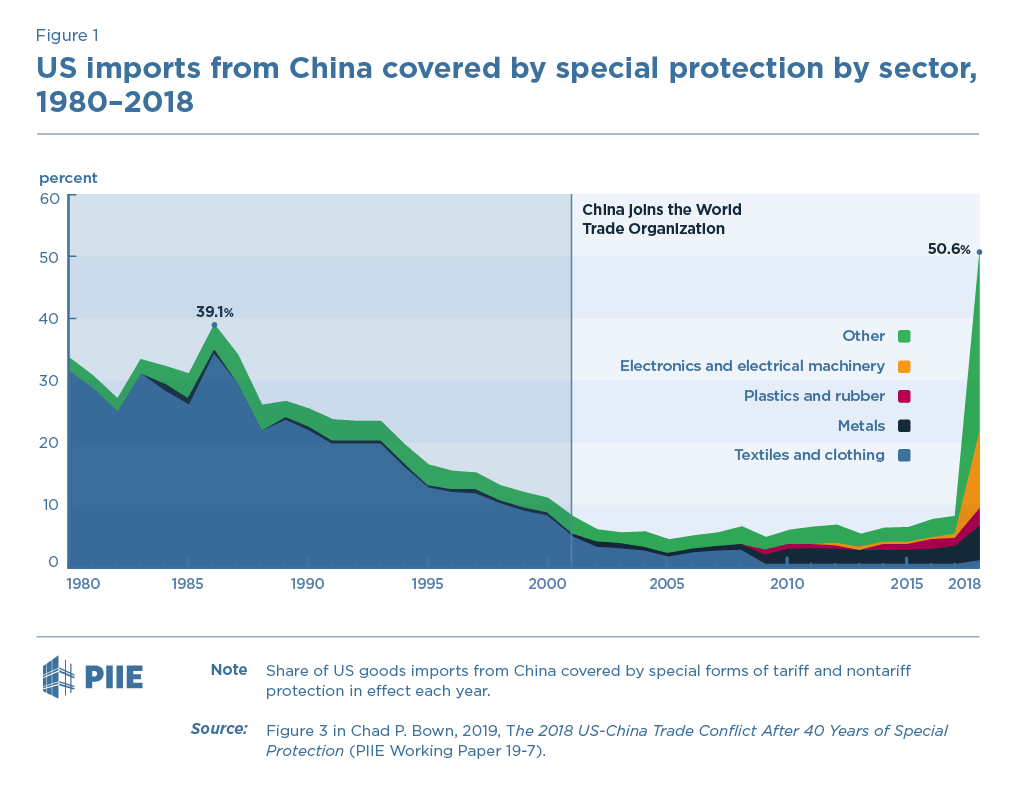 A second major distinction between US special protection in 2018 and 1986 was the types of products targeted. In 1986, almost all such protection imposed on China hit textile and apparel imports. Back then, clothing and fabrics made up 43 percent of China’s exports to the United States. And China was not alone at that time—the United States restricted much of its trade with the world in those products through a decades-long deal called the Multi-Fiber Arrangement.

In contrast, the Trump administration’s 2018 protection on China hit mostly everything but those products. Today, textiles and apparel make up only 8 percent of US imports from China, and Trump’s tariffs targeted only 13 percent of those imports (figure 2).

Trump’s protection instead hit 54 percent of US imports of all other goods from China. 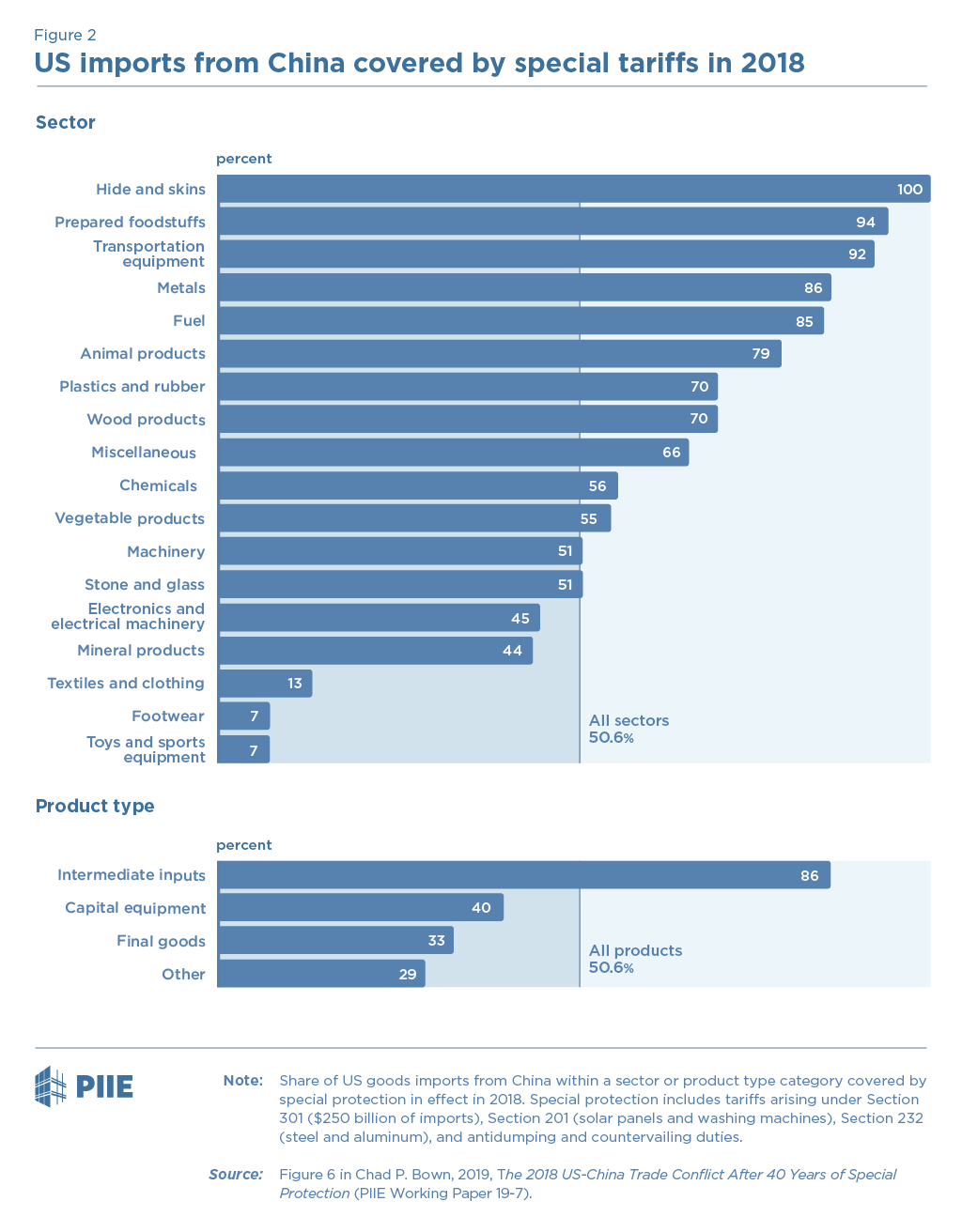 3. Trump’s tariffs may have been economically costly but politically strategic.

By avoiding consumer goods like clothing, Trump’s tariffs targeted more than 86 percent of imports of intermediate inputs from China (figure 2). Taxing parts and components increases costs to American companies and makes it harder to access global supply chains. US firms are then at a cost disadvantage as they try to take on competitors in the rest of the world.

Yet Trump’s choice of protection may pay off politically. While there were comparatively few American economic winners from Trump’s tariff protection, those that did gain were geographically concentrated in politically competitive swing districts such as the Rust Belt where some of the closest election-year voting typically takes place.[1]

Not to be outdone, China responded to Trump’s tariffs on $250 billion of US imports by retaliating against $110 billion of US exports. It had hit back earlier in the year in response to Trump’s March tariffs on steel and aluminum. All told, China’s additional protection in 2018 covered 70 percent of its imports from the United States.

But the economics and politics of how China imposed its tariffs were quite different. And the structure of China’s protection may have important implications for the negotiations.

Economically, China’s tariffs hit over $20 billion of US agricultural exports, including more than $10 billion of soybeans. Nearly 100 percent of US exports of farm-related products to China—the United States’ second largest agricultural export market after Canada—became subject to retaliation in 2018 (figure 3). China’s retaliation only added to US farmers’ suffering caused by President Trump’s other policy decisions. Canada, the European Union, and Mexico also retaliated against US agricultural exports in response to his steel and aluminum tariffs. And American farm exports are increasingly shut out of the Japanese market because of his decision to pull the United States out of the Trans-Pacific Partnership agreement.

Politically, China’s tariffs hit US counties in rural areas in the Midwestern plains and Mountain West states. But these districts tend to vote Republican by a wide margin and are simply less competitive electorally. [2] It may turn out that such voters are politically insensitive to even the most damaging economic effects of Trump’s trade war.

Nevertheless, media reports have indicated that one of the Trump administration's negotiating requests is that China shift some of its retaliation off US farmers and onto US exporters of other products.

China may be reluctant for economic reasons. Its initial retaliation was already selective and strategic. And this is evidenced by other, relatively subtle, ways it structured its 2018 tariffs.

Second, China did not even fully match the level of Trump’s tariffs. In response to Trump’s 10 percent duties on $200 billion of imports imposed in August and September, China imposed tariffs of only 5 percent on about two thirds of its retaliation on imports of $60 billion.

And figure 3 illustrates the economic implications if China were to shift its tariffs from agriculture to some other US exports. It would likely have to increase its tariffs on imported inputs, and that would hurt the competitiveness of Chinese firms. China’s initial approach was to mostly stay away from parts and components, prioritizing the competitiveness of Chinese firms and their access to global supply chains.

Even though China has resumed some US soybean purchases in 2019, it has yet to remove its tariffs. It has simply directed state-owned enterprises to buy American soybeans.

5. Trump’s trade war has not changed the nonreciprocal tariff relationship.

Finally, if the recent media reports are accurate, then Chinese and American tariffs may be here to stay, even if there is a deal between Presidents Trump and Xi Jinping.

One of President Trump’s complaints motivating his 2018 actions was that US and Chinese tariffs were not reciprocal.[3] Before his 2018 actions, the United States applied tariffs toward imports from China that averaged around 3 percent (figure 4). China’s tariffs toward imports from the United States at the time were higher and averaged 8 percent.

Yet Trump’s trade war has left this relationship mostly unchanged. As figure 4 shows, when Trump was done applying his tariffs, average US tariffs toward China had increased to over 12 percent. But China’s retaliation increased its average tariff toward imports from the United States to nearly 20 percent. Thus far, the only difference is both countries are suffering the costs of applying higher tariffs.[4] 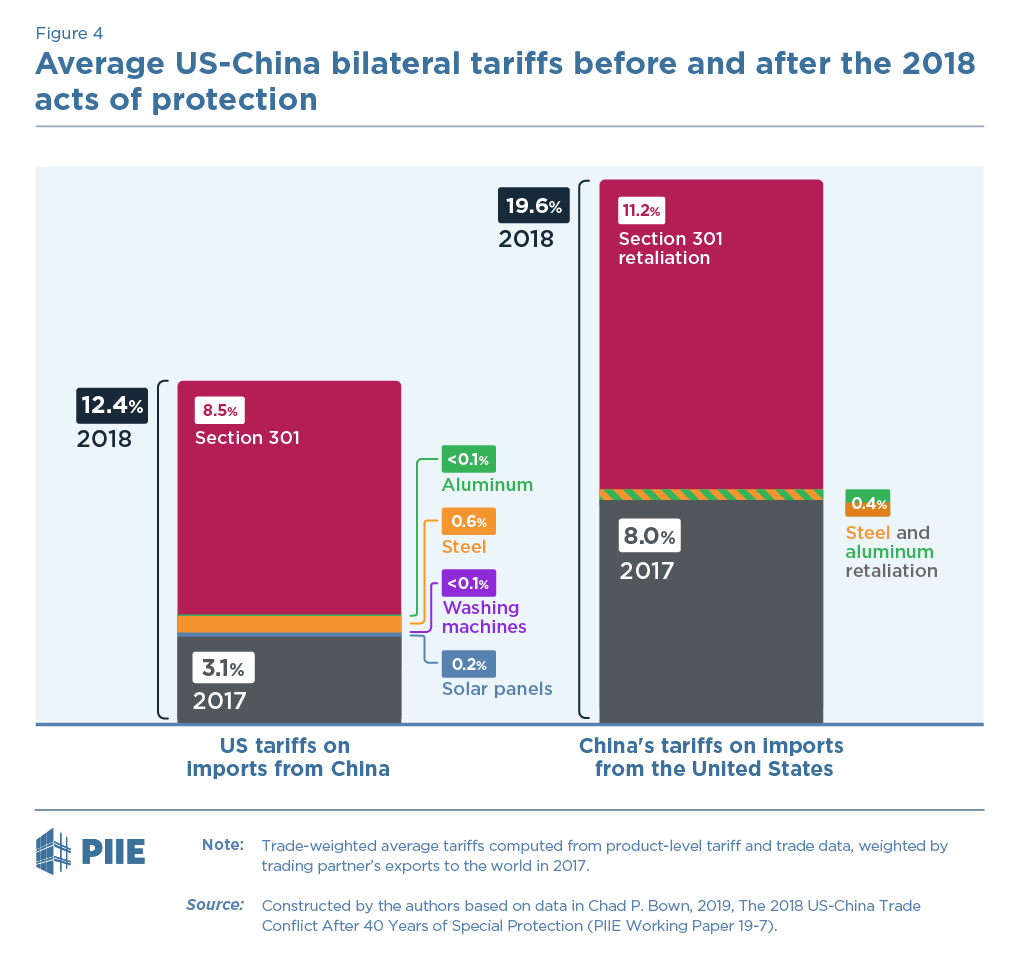 Once all is said and done, evaluating Trump’s trade war will require a careful assessment of the US-China trade and policy relationship, as well the collateral damage on the trading system itself. But the question looming over any near-term deal that Trump negotiates with China is what will happen to all of those 2018 tariffs.

Amiti, Mary, Stephen Redding, and David Weinstein. Forthcoming. The Impact of the 2018 Trade War on U.S. Prices and Welfare. Journal of Economic Perspectives.

3. President Trump tweeted on April 7, 2018, soon after issuance of the Section 301 report and the announcement that he was planning to impose tariffs on tens of billions of dollars of imports from China, “The United States hasn’t had a Trade Surplus with China in 40 years. They must end unfair trade, take down barriers and charge only Reciprocal Tariffs. The U.S. is losing $500 Billion a year, and has been losing Billions of Dollars for decades. Cannot continue!”

4. Amiti et al. (forthcoming) and Fajgelbaum et al. (2019) provide evidence that importers in both countries have borne most of the incidence of the tariffs imposed in 2018, and thus there have been few terms-of-trade gains from the tariffs.