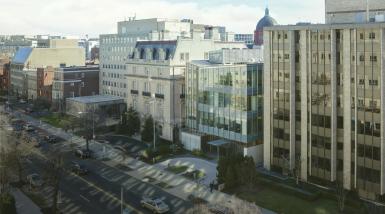 The Peterson Institute for International Economics (PIIE) is an independent nonprofit, nonpartisan research organization dedicated to strengthening prosperity and human welfare in the global economy through expert analysis and practical policy solutions.

The Institute is committed to rigorous, intellectually open, and indepth study and discussion. It attempts to anticipate emerging issues and present ideas in useful, accessible formats, to inform and shape public debate. Its audience includes government officials and legislators, business and labor leaders, management and staff at international organizations, university-based scholars and their students, experts at other research institutions and nongovernmental organizations, the media, and the public at large.

Our staff of about 75 includes over 50 senior researchers, all distinguished for their combination of research expertise and policy experience. The Institute's agenda emphasizes international trade and investment, international finance and exchange rates, macroeconomic policy and crisis response, globalization and human welfare, and studies of key economic regions. Institute staff have unique expertise on the major economies with special reference to Brazil, China, the European Union, Japan, Korea, and the Middle East, as well as the United States itself and its neighbors Canada and Mexico.

Our research has provided some of the intellectual foundations for many major international policy initiatives of the past four decades:

Other influential analyses have addressed:

Our award-winning building (architects: Kohn Pedersen Fox, 2001 on think tank row) in Washington, DC, houses our accomplished team of 70 fellows, analysts, and professional staff. We sometimes partner with independent think tanks around the world to increase the scope of our research and outreach, but maintain our one home base for our team.

Institute events convene a diverse array of high-level specialists from government, business, NGOs, and the research community to engage in constructive dialogue. We create audiovisual materials, interactive graphics, and social media content to deepen the public’s understanding of the international economic issues discussed. We are the podium of choice for senior policymakers to announce and explain many international policy initiatives.

PIIE has been consistently awarded the highest possible rating by Charity Navigator in recognition of our commitment to transparency and open disclosure of funding.