Following the failure of their trade negotiations on May 9, the United States and China have escalated  the trade war initiated by President Trump. In the first phase of the war, during 2018, the United States imposed tariffs on $250 billion of Chinese exports. China immediately retaliated with tariffs on $110 billion of US exports. Then, when talks hit a snag this month, Trump abruptly increased the tariffs imposed last September on $200 billion of Chinese imports from 10 percent to 25 percent.  In response, China announced its intention to increase on June 1 the tariffs covering some of the $60 billion of US exports it had already hit in September. The Trump administration has also begun the process expected to lead to a 25 percent tariff on most of the US imports from China so far untouched by his trade war.

Should President Trump follow through with these additional tariff threats, taxes would go up on a vast array of imported consumer products—like clothing, shoes, toys, and electronics—previously spared by his actions. Taken together, such steps would also raise US tariffs on China to levels similar to those resulting from the infamous Smoot-Hawley Tariff Act of 1930 enacted on the eve of the Great Depression.

The charts here illustrate just how dramatic the 2019 tariff actions are.

In 2018, Trump imposed three major sets of tariffs on China alone. The first announcement of tariffs on imports of $50 billion included 25 percent tariffs, first on $34 billion (imposed July 6) and later on $16 billion of imports (imposed August 23).  Then, on September 24 he imposed 10 percent tariffs on a separate set of imports of approximately $200 billion. When Trump was done applying his 2018 tariffs—on $250 billion of imports from China, as well as imports of steel, aluminum, solar panels, and washing machines from all countries—average US tariffs toward China had increased to 12.4 percent.

On May 10, 2019, Trump increased his tariffs on that $200 billion of imports from 10 percent to 25 percent. Once those tariffs are fully in effect,[1] the United States will apply an average tariff toward China of 18.3 percent.

Finally, if Trump follows through with his threat to impose a 25 percent tariff on most of the rest of US imports from China, the average US tariff toward China would increase to 27.8 percent.[2] 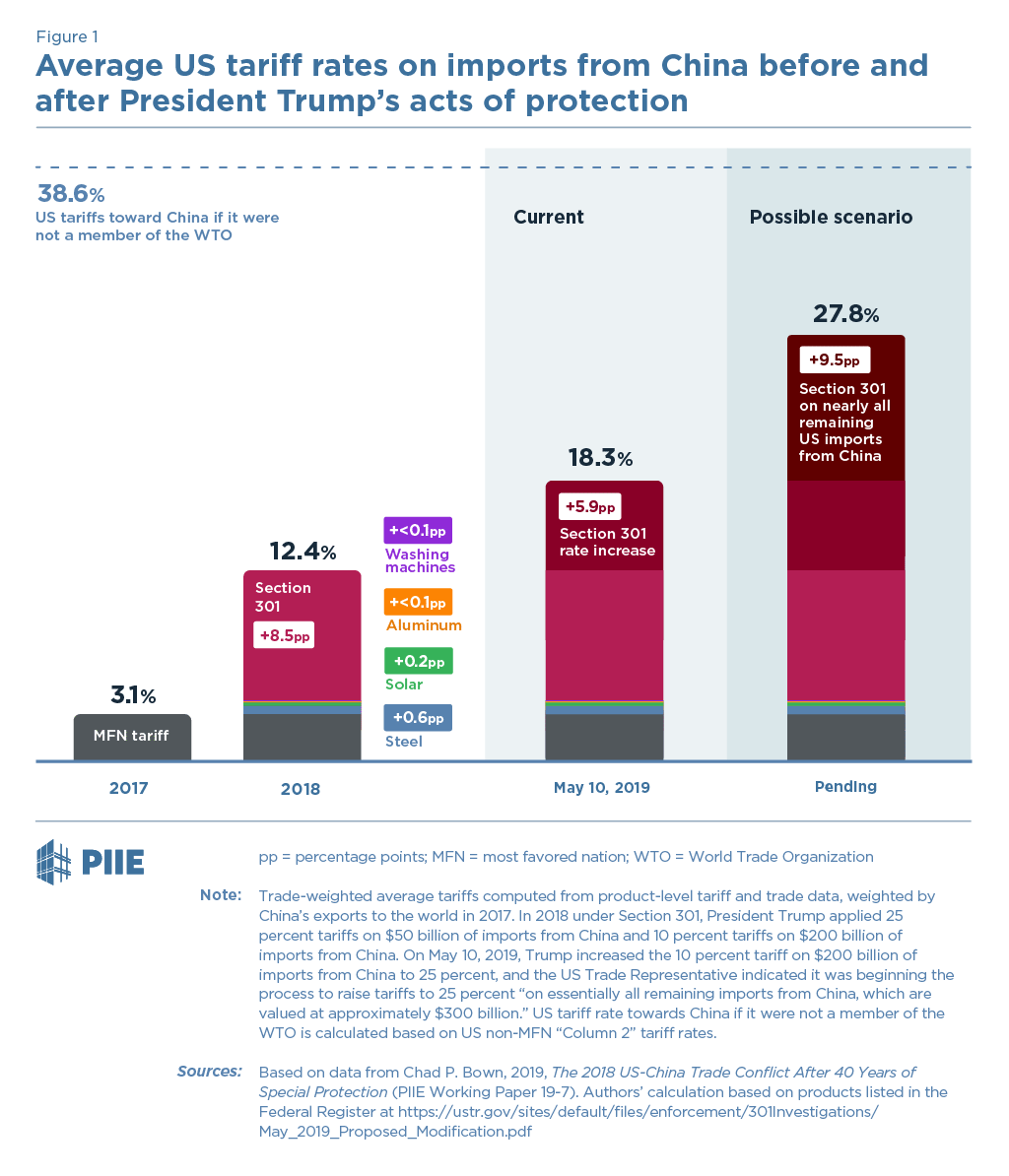 Trump is thus threatening tariffs on China that are not far from the average level of duties the United States imposed with the Smoot-Hawley Tariff Act of 1930. As another point of comparison, if China were not a member of the World Trade Organization, it would currently face a US tariff of roughly 38.6 percent. [3]

From China’s perspective, there is one important way in which Trump’s tariff escalation is worse than the US protectionism of the 1930s. In the 1930s, the United States applied the Smoot-Hawley tariffs to imports from all trading partners. To date, Trump’s actions show that China is being discriminated against in the US market far more than most other foreign suppliers. At least for the moment, US tariffs toward most all other major economies remain relatively low—on average 3 to 4 percent.

President Trump highlighted the competitive disadvantage that his policies are thrusting on China with a series of tweets on May 13:  “Also, the Tariffs can be completely avoided if you buy from a non-Tariffed Country, or you buy the product inside the USA (the best idea). That’s Zero Tariffs. Many Tariffed companies will be leaving China for Vietnam and other such countries in Asia. That’s why China wants to make a deal so badly!”

US special protection toward China is not new, but it now covers more imports than at any point since the 1980s

The additional US tariffs of May 10 hit products already covered by the 10 percent duties Trump imposed in 2018. Overall, over 50 percent of US imports from China had become subject to special US trade protection by the end of 2018 (figure 2). Earlier protectionist actions  covered not only the products hit by Trump’s tariffs on $250 billion of imports from China but four other sets of US special tariffs imposed over the year, including on steel, aluminum, solar panels, and washing machines. 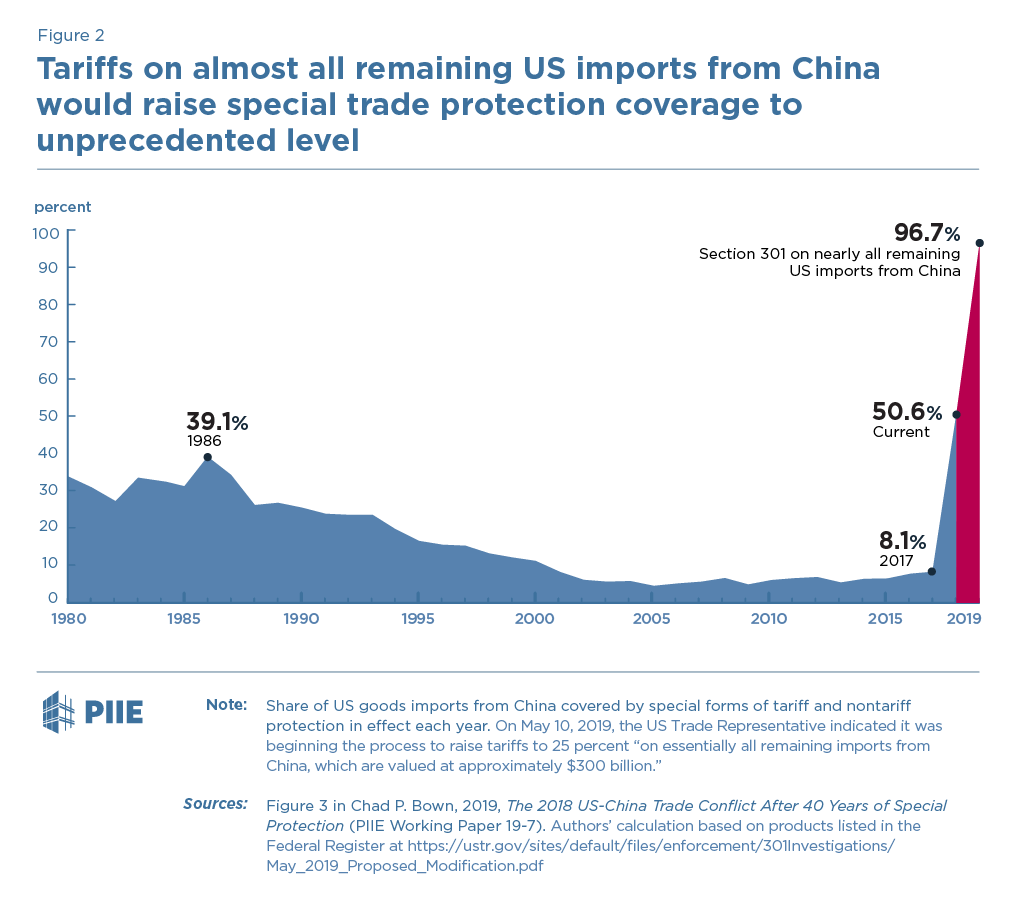 The Trump administration’s actions in 2018 and 2019 are thus noteworthy not only because of the size of the tariffs imposed but also because of the amount of imports impacted. The United States has imposed special protection on imports from China for decades. But the long, historical view shows the enormous scope of the 2018 tariffs.

The only thing that would be comparable is if Trump follows through with his current threat to impose tariffs on the rest of US imports from China. That would lead to an increase of over 46 percentage points—from current levels of 50.6 percent of imports to 96.7 percent. 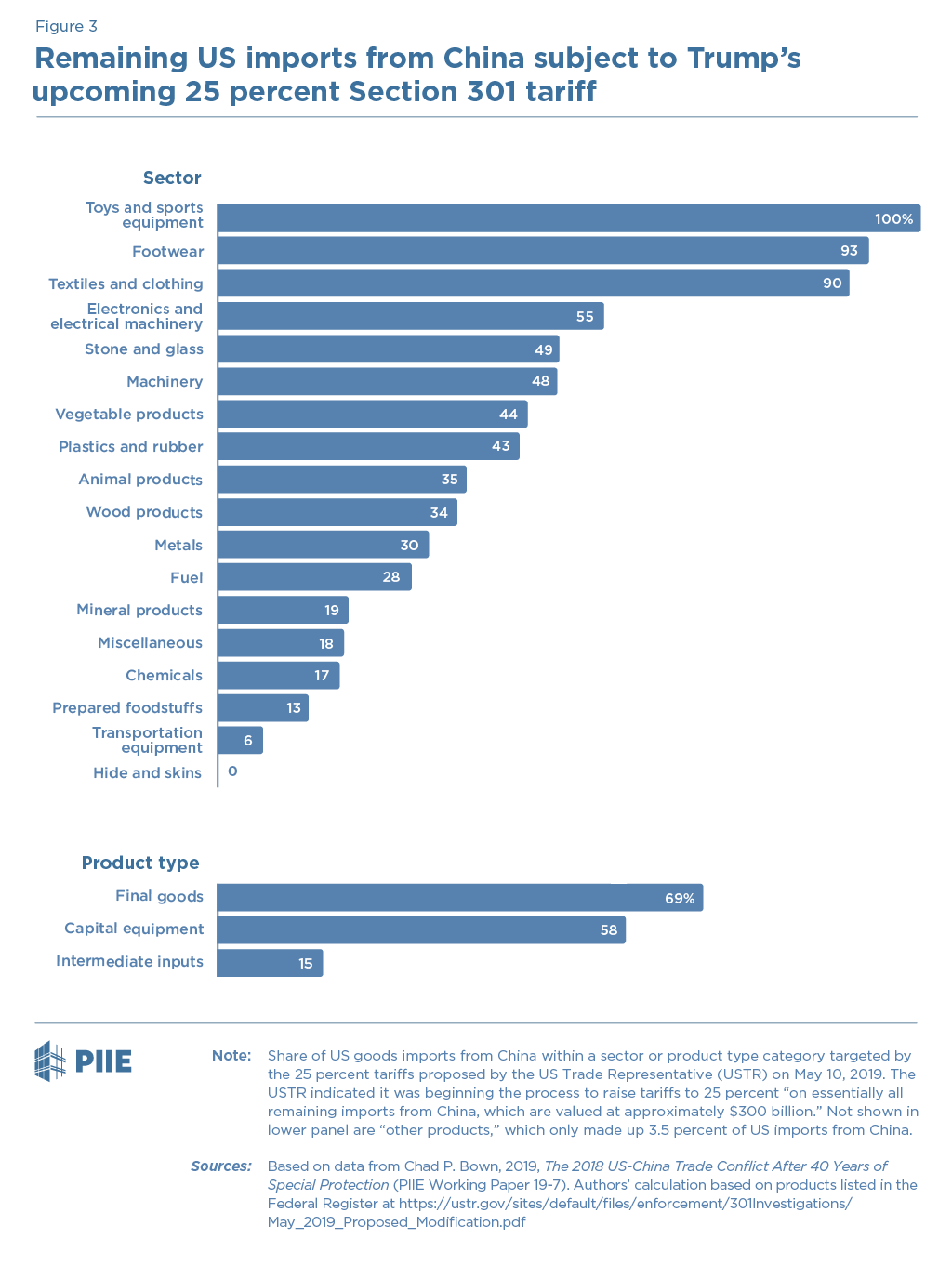 During the 2016 campaign, Trump threatened that as president he would impose 45 percent across-the-board tariffs on China. Following through with even his latest threat would not yet achieve those tariff levels, but they would inch closer.

These figures add up to a startling conclusion. The most recent US tariff intensification with China could be a turning point—for the worse—in Trump’s ongoing trade war. The latest steps will impose new costs on the American economy and will introduce even more uncertainty about Trump’s end game. Is his objective to negotiate a trade deal, or is it to make tariffs on Chinese goods a new normal in US-China relations?  The only certainty at this stage is that Trump’s tariffs are escalating toward historic levels.

Authors’ note: Some of the analysis in this post was previously presented in Bown and Zhang (2019).

Bown, Chad P., and Douglas A. Irwin. 2018. What Might a Trump Withdrawal from the World Trade Organization Mean for US Tariffs? PIIE Policy Brief 18-23. Washington: Peterson Institute for International Economics.

1. Technically, those tariffs only apply to US imports from China that were also exported after May 10, 2019. The prior tariffs of 10 percent apply to “on the water” products exported from China before May 10, 2019, provided they arrive in the United States prior to June 1, 2019, according to the Federal Register. In a subsequent Federal Register notice, the administration changed the June 1, 2019 deadline to June 15, 2019.