Global trade has grown slowly since the Great Recession, no longer outpacing the rate of GDP growth as in past decades, spurring questions on what explains the lackluster growth. The CPB World Trade Monitor reported a 13.8 percent fall in the value of global goods trade in 2015. Slow economic growth coupled with sluggish demand, particularly in emerging markets, the rising US dollar, fluctuating exchange rates, and falling commodity prices have been identified as potential explanations (WTO 2015). The lack of fresh trade liberalization and growing cases of protectionism since the Great Recession have also been blamed (Hufbauer 2016 and Evenett and Fritz 2016). According to the McKinsey Global Institute, up to 75 percent of the flattening of trade can be attributed to cyclical factors, such as factor prices and weak demand (Manyika et al. 2016). Caroline Freund (2016) also argues that cyclical factors largely explain the slowdown but also points to structural issues including the development of global supply chains and China’s recent shift away from reliance on exports for growth.

In volume terms, however, the sluggish growth picture looks less stark. Since the end of the financial crisis in 2009Q3, global and regional trade, measured as average export and import volume indices, has grown. From 2009Q3 to 2015Q3, global trade grew more than 30 percent in cumulative terms. Asia outperformed all other regions, trading 45 percent more merchandise late last year compared to six years ago (figure 1). But overall, the trend of slower growth since 2009 continues on a quarter-over-quarter basis (figure 2). 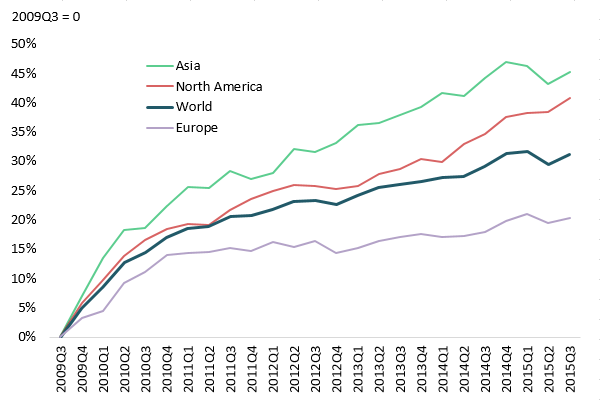 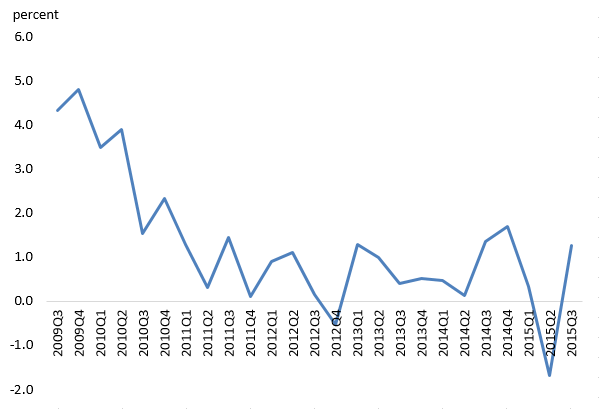 The gloomy trade figures came in just as finance ministers and central bank governors met at their February 2016 G-20 summit in Shanghai kicking off a number of meetings to culminate in the G-20 Leaders Summit in September 2016. The group of finance ministers recognized the “importance of trade and investment for growth and their recent weakness,” but the structural reform agenda did not explicitly refer to trade facilitation or liberalization.

Trade ministers are scheduled to meet in July, and trade received some renewed attention on the G-20 agenda with a new working group on trade and investment formed under Chinese leadership. The group convened for the first time in January 2016, with discussions centering on the future of the multilateral trading system, promoting global investment, and the development of global value chains. A more concerted effort is welcome. But several broad G-20 commitments of the past have yet to be realized, from concluding the WTO Doha Round to enacting the 2008 moratorium on new trade restrictions and protectionist measures.

The G-20 forum was essential in the aftermath of the global financial crisis in fostering a shared understanding that raising tariffs to favor domestic markets was bad economics, perhaps a learned lesson from the beggar-thy-neighbor tariff wars of the past. However, the latest Global Trade Alert report recorded over 3,500 new protectionist measures since 2008 by G-20 members, with 81 percent still in force today, indicating that many governments have distorted international markets through indirect, nontariff barriers to trade and competition, such as local content requirements and inefficient subsidies. Such self-defeating forms of regulation discourage efficient resource allocation and have an adverse effect not merely on trade growth but also on domestic economic performance.