Phase One China Deal: Steep Tariffs Are the New Normal

Nearly two years after President Donald Trump fired the opening shot in his trade war with China, the smoke is clearing on what seems to be the new normal in the troubled US-China economic relationship. Some previously threatened tariffs poised to hurt American shoppers are not taking effect. Some existing US tariffs are being cut in half. China is stepping up purchases of agriculture, energy, and other goods. But overall, tariffs on hundreds of billions of dollars of US trade remain in effect, and no pathway has emerged for the two countries to return to pre–trade war amity.

The December 13 announcement of a "phase one" deal with China by US Trade Representative (USTR) Robert Lighthizer is missing many details. The USTR issued a fact sheet but withheld the 86-page agreement itself. It is apparently still being translated and subjected to a legal "scrub" to ensure consistency within the document and across the two languages.

Lighthizer indicated that he and his negotiating counterpart, Chinese Vice Premier Liu He, plan to sign and make the agreement public potentially the first week of January 2020. The deal is then expected to go into effect a month later.

The new normal is based on three actions the Trump administration announced on December 13.

First, US tariffs on $162 billion of US imports scheduled for imposition at 15 percent on December 15 will not go into effect. These duties would have hit US imports of toys, consumer electronics, and other goods.

Second, Trump will reduce to 7.5 percent the tariffs of 15 percent he had imposed on over $100 billion of imports on September 1, 2019. The exact timing of the cut is still to be determined. But if the deal is signed in early January, the reduction is expected to legally enter into force 30 days later.1

Third, nothing happens to the 25 percent tariffs Trump imposed on $250 billion of imports prior to September 1. US tariffs imposed in July, August, and September of 2018—primarily on imported parts and components—remain unchanged.

The outlook for additional progress is grim. The administration has indicated no plans to reduce tariffs on China any further. Thus, going into the 2020 election season, Trump's special tariffs will continue to cover nearly two thirds of all US imports from China (figure 2).

The US-China trade war has unfolded in roughly four stages.2 For the US tariffs, it is important to consider both the size of the tariff increase (figure 1) as well as the share of imports covered by the tariffs (figure 2) in each stage. 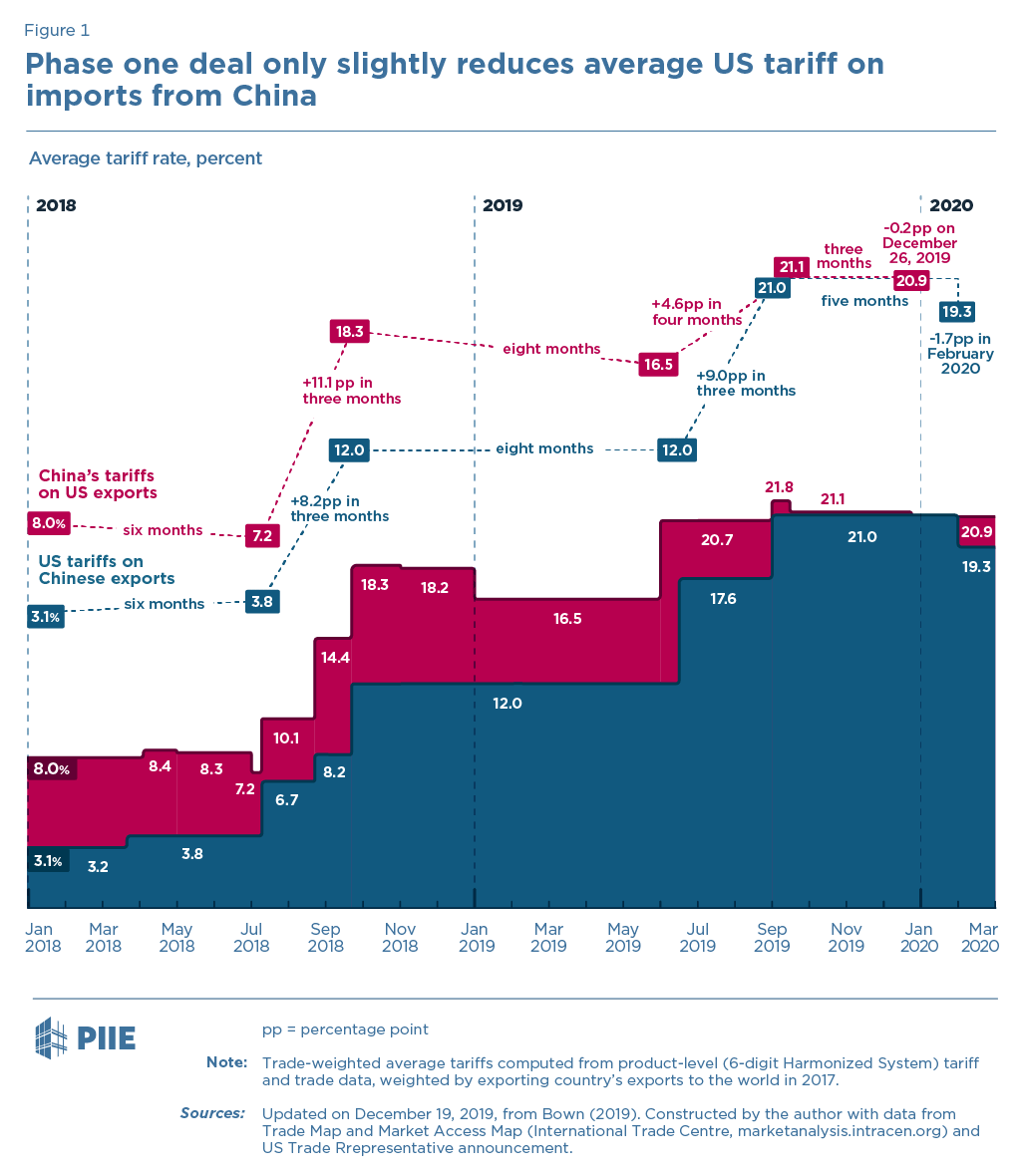 The first six months of 2018 featured only a moderate increase in both the average tariff as well as the coverage of imports from China, despite Trump's controversial decisions to impose new duties on solar panels, washing machines, steel, and aluminum.3 Trump's tariff actions resulted in a sharp increase in both the average tariff and the trade coverage during the summer of 2018. For example, US tariffs went from directly targeting only 0.8 percent of imports from China as of early July to 44.7 percent by late September 2018.4 These tariffs were authorized after an unfair trade investigation conducted under Section 301 of the Trade Act of 1974. 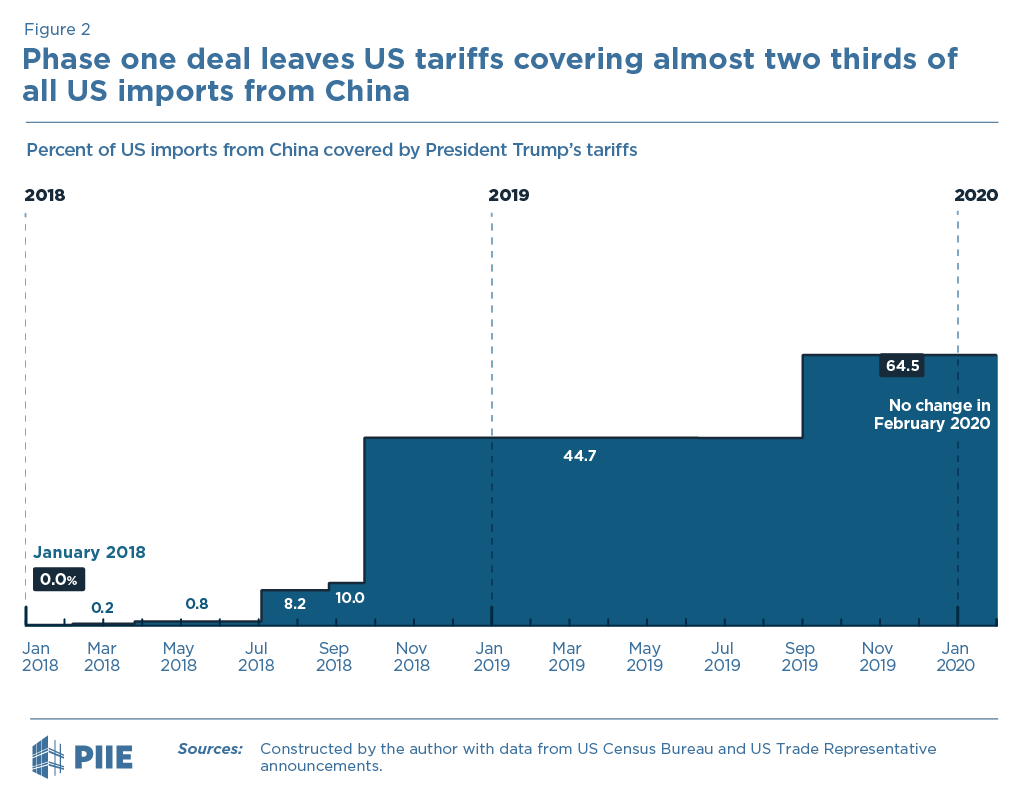 The lengthy third stage was mostly a period of truce. Nearly a year passed—September 25, 2018, through August 31, 2019—with little change in trade coverage of tariffs. Though Trump did raise tariffs sharply in June 2019 (see again figure 1) after talks broke down, the tariff increase from 10 percent to 25 percent on $200 billion of imports did not extend the coverage to any new products. But on September 1, 2019, Trump imposed new 15 percent tariffs covering another 20 percentage points of imports from China.5 The average US tariff on imports to China hit 21 percent.

Even the tariff reduction expected when the phase one deal is implemented in early 2020 will not reduce the share of imports affected by Trump's tariffs. Thus, 64.5 percent of US imports from China will remain covered by the administration's tariffs.

The Section 301 tariffs on imports from China tend to target intermediate inputs (figure 3). Over 90 percent of parts and components imported from China will continue to be hit. Tariffs on intermediate inputs make it more costly for American companies to integrate with supply chains in China. For these products, the result is continued pressure for some decoupling of the US and Chinese economies. 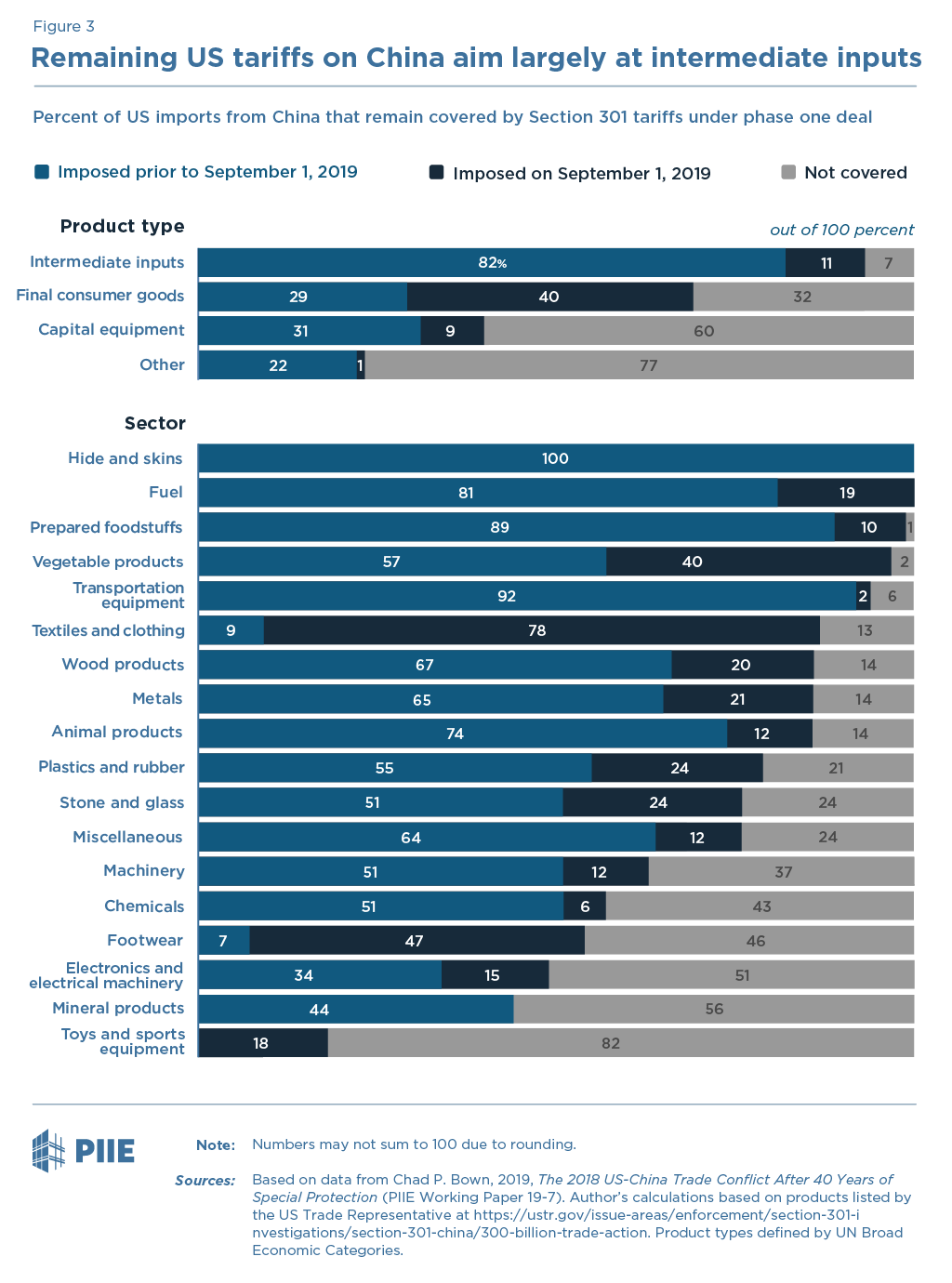 What happens to China's tariffs on imports from the United States

China also announced modifications to its tariff plans. First, it will not impose duties it had previously indicated would go into effect alongside Trump's original tariffs scheduled for December 15. Beijing also announced it will continue to suspend some retaliatory tariffs on American-made automobiles and auto parts—these had also been scheduled for reinstatement on December 15.6

On December 19, Beijing announced it will exempt a handful of chemical products—covering $660 million of US exports—from its retaliatory tariffs for one year, effective December 26. This will reduce China's average tariff on US exports slightly to 20.9 percent from current levels of 21.1 percent.

The December announcements imply that China's applied tariffs will also remain at elevated levels. Retaliation stemming from Trump's tariffs means that China will have increased its average tariffs on US exports to 20.9 percent, as compared to 8.0 percent before the trade war (see again figure 1).

Overall, 56.7 percent of China's imports from the United States will remain covered with retaliatory tariffs (figure 4). The major escalation of trade coverage of China's retaliatory tariffs was timed to coincide with many of the same basic inflection points as the Trump administration's actions during the trade war. 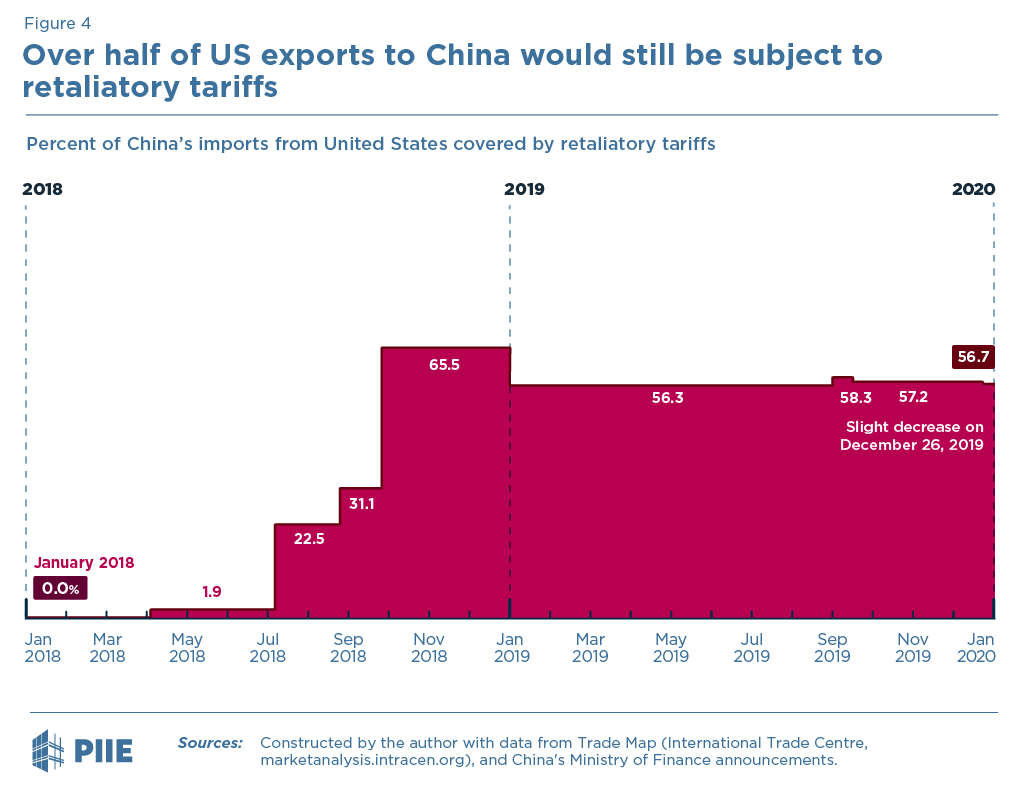 Retaliatory tariffs started slowly in 2018. Beijing imposed its first set of limited responses to Trump's steel and aluminum tariffs in March. Between July and September 2018, China's retaliatory tariff coverage increased from 1.9 percent to 65.5 percent of US exports to China.7 The initial truce between Presidents Trump and Xi in Buenos Aires in December 2018 partially de-escalated the confrontation as China suspended retaliatory tariffs on autos and parts. The trade coverage has remained fairly steady over 2019 at between 56.3 and 58.3 percent of its imports from the United States. Even as China retaliated by raising its tariff rates first in June and again in September 2019 (see again figure 1), not many new products were covered by those tariff changes.

More Chinese tariff reductions may yet be announced. It was surprising how the USTR factsheet outlining the deal made little mention of China's tariffs or other trade policies. China's non-reciprocal tariffs were a Trump administration complaint prior to the trade war, and Beijing's retaliation in 2018 and 2019 has often drawn President Trump's ire.

Instead, the USTR announcement focused on purchases, setting ambitious targets that China may find hard to reach. The announcement indicated China had committed to import various US "goods and services over the next two years in a total amount that exceeds China's annual level of imports for those goods and services in 2017 by no less than $200 billion." Lighthizer further clarified by saying: "We're going to go up at least by a hundred, probably a little over one hundred. We had about $128 billion [of imports from China] in 2017."

Doubling US exports to China in two years would be considerable. Lighthizer also expects China to increase agricultural purchases from the United States to $40 billion to $50 billion by 2021, up from the 2017 baseline of roughly $24 billion. That goal too would seem difficult to achieve, given reduced Chinese demand for soybeans resulting from the African swine fever outbreak that has sharply reduced the Chinese domestic pig herd.

What else was in and out of the phase one deal?

Much is at stake beyond the tariffs in the phase one deal with China, but until the 86-page document is released, the parameters remain difficult to assess. From the USTR factsheet and public statements, the deal will cover Chinese promises on currency, intellectual property, technology transfer, financial services, agriculture, and enforcement, in addition to those Chinese purchases.

Aside from more tariff cutting, the phase one deal also failed to make mention of Chinese industrial subsidies and state-owned enterprises. This is problematic, but not unexpected, as a potential Trump abandonment of these goals was signaled by the October 11 announcement. Tackling the concern over Chinese subsidies is likely to require a completely different approach than that taken so far.

At least three presidents before Trump have pressed China to address the policy issues brought to the forefront during the trade war. Their efforts were only marginally successful. Trump said he would try a new approach of confrontation and use of tariffs to gain leverage to force progress. Though phase one documents remain sealed, one main achievement appears to be locking in a new normal of high tariffs. Phase two may do better, but that may also depend on who is in the White House starting in 2021.

1. But one anticipatory effect of such an announcement is that American retailers may now hold off purchases from China of clothing and shoes—the major products on that tariff list—until after that early February 2020 tariff cut goes into effect.

2. The import coverage ratios depicted in figures 2, 3, and 4 are based on product-level import data for 2017—i.e., data available from the last full year before the tariffs went into effect and would have expectedly dampened trade flows. This is one contributing reason why the dollar value of trade covered by the tariffs can differ considerably from the US and Chinese government announcements. Note finally that unlike Bown (2019), for example, the trade coverage ratios depicted in these figures do not include tariffs arising under antidumping or countervailing duty laws.

3. On February 7, 2018, the Trump administration imposed tariffs on $969 million of imports from China of solar panels and $124 million of washing machines under Section 201 of the Trade Act of 1974. On March 23, 2018, the administration imposed tariffs on $1.1 billion of imports of steel and $1.9 billion of aluminum under Section 232 of the Trade Expansion Act of 1962. Historians may someday debate the exact timing of the beginning of the trade war, and thus whether to include those US tariff actions. The rationale for including them here is each involved a decision by the president of whether to impose protection, and the underlying concern behind three of the four (solar panels, steel, and aluminum) was Chinese subsidies that had not been "fixed" through use of more traditional policy instruments, such as antidumping or countervailing duties. For a discussion see Bown (2019).

6. China originally imposed retaliatory tariffs on autos and parts in 2018 but suspended them on January 1, 2019. On August 23, 2019, China announced it would end that suspension on December 15, 2019, thus reimposing the retaliatory tariffs.

7. Based on China's 2017 import data, the trade coverage of its key retaliatory tariff actions were as follows. On April 2, 2018, it imposed tariffs on $3 billion of imports in response to Trump's steel and aluminum tariffs. The 2017 trade coverage of Beijing's response to the Section 301 actions of 2018 was $33.8 billion on July 6 (List 1, or $34 billion), $14.2 billion on August 23 (List 2, or $16 billion), and $53.4 billion on September 24 (List 3, or $60 billion). Its June 1, 2019 retaliation modified tariff levels on $52.9 billion of imports. Similarly, its September 1, 2019 retaliation modified tariff levels on $25.5 billion of imports, but only $3.2 imports of new products were added. Note finally that some US exports were also hit by multiple rounds of Chinese retaliation—e.g., retaliation for both the steel and aluminum tariffs as well as retaliation for the Section 301 tariffs.