Will Farmers Gain from the New US-China Trade Truce?

The US-China trade truce reached in October 2019 reportedly calls for China to purchase US farm goods of up to $50 billion annually within two years. That’s a lot of soybeans, cereals, frozen fish, and pork, the main US agricultural exports to China. The so-called phase 1 announcement was touted with typical understatement by President Donald Trump as “the greatest and biggest deal ever made for our Great Patriot Farmers in the history of our Country.”

In fact, the deal is not yet done; trade officials are still trying to put promise to paper. Both sides hope to have a deal for Presidents Trump and Xi Jinping to sign by mid-November. But, as so often happens with President Trump’s deals, the accord could unravel: Trump has many times announced Chinese plans to buy US farm products like soybeans, only to pull back and charge Beijing with reneging.

Even if the deal is signed, it’s unlikely that either side could deliver on its bloated promises to sharply increase US farm exports to China to $50 billion annually, or anywhere near that total. Total US farm export revenues have averaged about $130 billion annually for the past three years (see table). If farm sales to China were to rise to $50 billion a year, China would account for almost 40 percent of US farm export revenues. And if they sell that much to China, will US farmers become overly dependent on their Chinese customers? Farmers might be well advised not to bet the farm, literally speaking, on a flimsy proposition.

The $50 billion target of US agricultural exports to China sounds great and would be good news for US farmers hard hit by President Trump’s erratic trade policies. But there are serious doubts whether China needs so much US pork and soybeans and, even if they did, whether US farmers could supply enough to hit that goal, as Trump acknowledged in one of his tweets. After raising doubts, he said: “Our farmers will figure it out. Thank you China!”

Before the Trump trade war, China was the number two market for US farm exports after Canada. In 2016, China purchased nearly $20 billion of US agricultural goods or about 15 percent of total US farm exports. In 2018, US sales to China fell sharply to $7.9 billion, but global US farm exports rose to $133 billion. Through August 2019, US farm exports to China have recovered to an annualized level of $11 billion but are still down by almost half from 2016. No wonder US farmers welcome even a limited trade deal! But no wonder they might also want to be wary.

Soybeans top the Chinese shopping list. As a sign of goodwill, China has announced substantial purchases of US soybeans for delivery in September–November 2019 in advance of the phase 1 trade deal. But soybean prices are down from the previous year, so US export receipts will not fully recover even with the help of increased sales. 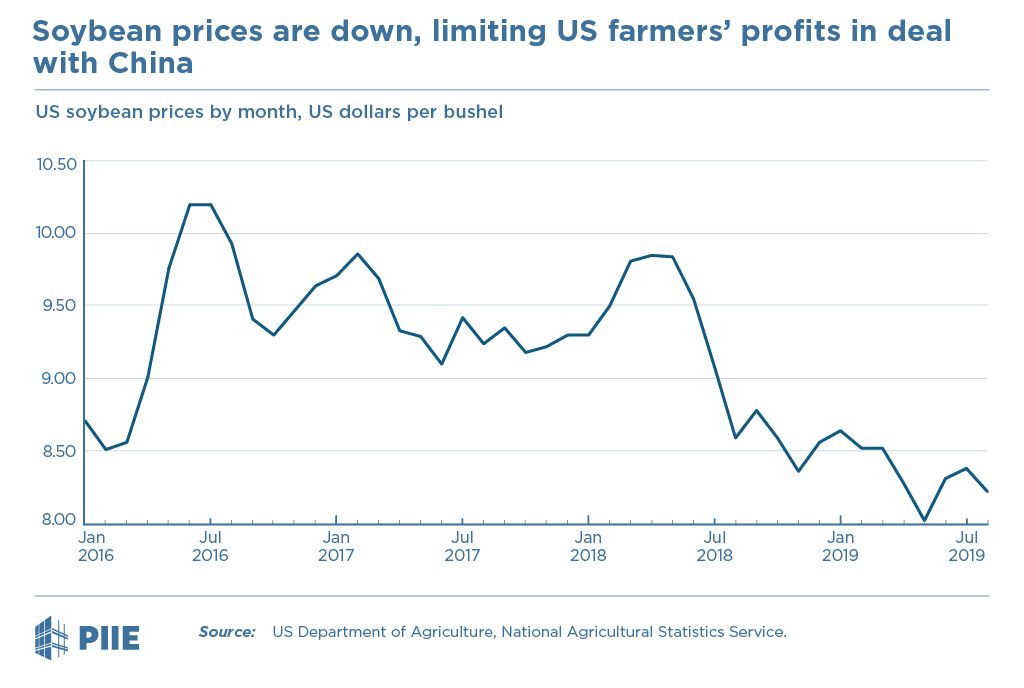 As for the question of how much more can US farmers supply for export to China, they will first draw down from their bloated inventories: In September 2019, soybean stocks were three times higher than stocks in September 2017 and totaled about 21 percent of US production in the 2018–19 crop year (September–August). The US Department of Agriculture (USDA) forecasts that half of the stockpile will be drawn down for consumption and export in the coming crop year.

But the USDA also forecast significantly lower soybean production because planted acreage is down almost 15 percent from the 2018–19 crop year. That decline was caused by poor weather conditions, policy uncertainty, and other factors. On balance, the supply of US soybeans will be about the same as last year. Accordingly, there is no room for additional exports from the improved but still depressed level of 2018–19. Perhaps the United States could import soybeans from Argentina and Brazil in order to have enough soybeans to increase exports to China!

Of course, over time farmers can adjust production and plantings to boost output. But there are limits to how much and how fast production can ramp up without spiking prices for US consumers.

For pork, the trade deal comes at a time when US producers may have more of an opportunity to take advantage. Chinese pork supplies have been ravaged by African swine flu, and US pork exports will help meet current Chinese demand. But even if China bought more US pork than Japan, the top US export market, sales would increase by just $1 billion.

Moreover, decreased pork production in China means decreased demand for imports of soybeans used as animal feed, so Trump’s target for sharply increased US exports of soybeans is unlikely to be met anytime soon. Even if US soybean production in the next crop year increased by 20 percent above 2019–20 estimates (a generous assumption given the USDA forecast of lower planted acreage), and the additional output was exported, it wouldn’t amount to a “hill of (soy)beans” in terms of export revenue. Exports would increase by 710 million bushels. If sold at last year’s prices ($8.58/bushel in September–November 2018), the added exports would bring in another $6 billion.

In sum, the US-China deal provides welcome relief for US farmers hard hit by Trump’s erratic trade policies, but it will take substantial effort just to get back to the export levels recorded before Trump started his trade wars. Even if US sales of pork and soybeans increase as estimated above, and other US farm exports double in value, it’s hard to see how US farm export revenues from sales to China could reach $40 billion to $50 billion as President Trump promised.