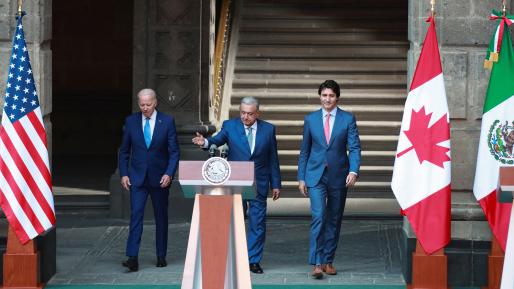 The leaders seemed glad, most of all, to adopt a collegial approach contrasting with former President Donald Trump, who used threats to blow up the North American Free Trade Agreement (NAFTA) and coerced Canada and Mexico to accept US demands for a revised pact—the United States–Mexico–Canada Agreement (USMCA)—that favored investment in the United States.  “We are not just neighbors and partners,” the three leaders declared. “Our people share bonds of family and friendship and value—above all else—freedom, justice, human rights, equality, and democracy. This is the North American DNA.”

Clever as it was for the leaders to label their message the “Declaration of North America,” or DNA, their pledge to affirm shared values (including diversity, equity, and inclusion) required no meeting. The same is true of the portions of the pledge addressing migration, development, health, and regional security, although it was notable that they emphasized cooperation on countering the trafficking of people, arms, and drugs, with a specific focus on the “illicit manufacture of fentanyl.”

More concrete but limited results could be found in their commitment to reduce by 15 percent (from 2020 levels) their emissions of an important greenhouse gas, methane, in the solid waste and wastewater sectors by 2030. The United States already has committed substantial funds to this objective in the Inflation Reduction Act of 2022 (IRA). But Congress will not likely provide US funds for Mexican environmental infrastructure. The leaders also pledged to develop a “North American clean hydrogen market” to support the transition from fossil fuels, though the commitment is ambiguous as to whether the countries will cooperate on research and development and safety standards as well as hydrogen trade.

The most important economic outcome of their summit was recorded in the DNA section on competitiveness. Regional supply chains are promised for semiconductors and electric vehicle (EV) batteries, to be achieved through public-private dialogues. Presumably, the three leaders will convene meetings with North American semiconductor and EV battery firms—almost entirely headquartered in the United States—to map out supply chains that emphasize North American content and de-emphasize Chinese content.

Of potentially greater consequence, Presidents Biden and Lopez Obrador, in a bilateral meeting that preceded the trilateral summit, discussed prospects for developing clusters of semiconductor firms in the border region. These plans are reminiscent of the initial NAFTA era commitments to fund environmental infrastructure through the North American Development Bank, which mostly launched projects on the US side of the border. Mexican officials hope that some semiconductor operations will relocate south of the border, but it is unlikely that investments supported by the US Creating Helpful Incentives to Produce Semiconductors (CHIPs) and Science Act of 2022 would be provided to Mexican facilities, or that Mexico would attract sizeable new semiconductor investments without significant reforms in Mexican tax and regulatory policies.

As with this provision on semiconductor investments, the competitiveness section clearly alludes to China without mentioning it. The three countries, for example, are to cooperate and review their reserves of critical minerals, many of them now dominated by Chinese suppliers. While no new commitments are made by Canada and Mexico to subsidize the exploration, mining, and refining of critical minerals, the US IRA contains ample funds that could be deployed to produce EV battery components and other critical minerals in the United States.

Finally, the competitiveness section calls for the three governments “to foster high-tech entrepreneurship, promote small and medium-sized enterprises, and strengthen technical education.” This worthy goal was not backed by specifics.

What is missing from the declaration is progress on the numerous and familiar trade irritants that hamper North American commerce. Resolving longstanding trade disputes requires high-level attention, but the summit leaders simply delegated the matters to their trade ministers without specific guidance to help them break current impasses.

By ducking these and other sensitive issues, which cover a substantial share of merchandise trade between the three countries, the three leaders essentially signed a non-aggression pact. Their DNA reaffirms North American friendship and shared values but makes little progress on the agenda of North American economic integration and ongoing trade disputes that threaten to fracture regional comity.

The Case for Raising de minimis Thresholds in NAFTA 2.0