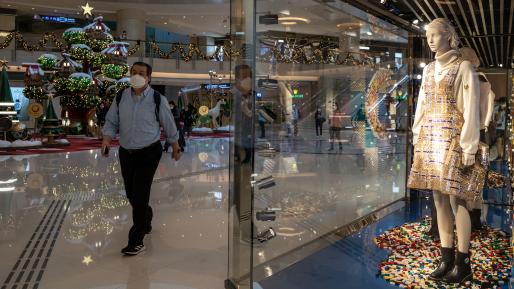 China is closing out the year 2022 with the most dismal economic and social welfare performance in recent decades. President Xi Jinping entered the Year of the Tiger last February full of promise, pride, and prospects for an unprecedented third term in office. Now with his abrupt and chaotic exit from the zero-COVID policy, he and China’s other leaders have effectively acknowledged that the widespread testing, lockdowns, and long quarantines exacted an intolerable burden on China’s economy and its citizens. And the latest data from the Chinese statistical authority show still further slowdown of the Chinese economy in November, threatening to pull this year’s growth rate below 3 percent.

The data also showed that retail sales last month shrank by almost 6 percent compared with a year ago. Industrial output growth dropped to a six-month low with an outright contraction of production in cement, automobiles, electronic devices, and integrated circuits. Investment growth through November further slowed as the divergence between state-led and private investment growth further widened. The property slump worsened with property investment and sales both continuing to shrink and property prices again dropping.

Many Chinese social media users have reported having a rather easily managed coronavirus infection. But the vaccination rate among the elderly remains dangerously low and uncertainty surrounds the coping ability of the nation’s medical system. Shortages of basic medicines as well as antiviral drugs suggest that the country remains underprepared for the surge in inflections. Despite some modeling suggesting the potential for at least 500,000 COVID-related deaths, the policy change is unlikely to be reversed again. Chinese authorities have stopped tracking asymptomatic infections and allow most with mild symptoms to self-isolate at home.

Though reopening is now underway, economic recovery will not follow immediately. China faces surging infections and fears of contracting the virus. Central Beijing in recent days looks like a city under lockdown despite the lifting of most government-mandated restrictions on movement. With public health experts predicting the peak of the virus’s spread in a month around the Lunar New Year, it will take at least two months until people feel comfortable moving around again.

Economic growth is unlikely to be driven by net exports in the near term, depriving the economy of what was an important driver of expansion in the second and third quarter of this year. China’s exports and imports in dollar terms in November 2022 both recorded the sharpest declines since the first half of 2020.[1] Given the bleak outlook for the global economy, external demand for Chinese goods will almost certainly continue to worsen into 2023. Meanwhile, Chinese imports will likely expand as domestic demand gradually recovers. Net exports, therefore, will lose even more steam to sustain growth next year.

China’s recovery will depend on domestic investment and consumption. Investment has been a stabilizing force this year, but its role will subside in 2023. Strong growth in public sector investment, especially in infrastructure and manufacturing, has helped make up for the sharp contraction in property investment and for sluggish private sector investment. But given tightening fiscal constraints for local governments, it will be difficult for China to continue to rely on infrastructure investment to revive growth.

According to the Chinese news outlet Caixin, some Chinese localities apparently have run out of good infrastructure projects and have instead spent the proceeds of their special-purpose bonds on building centralized quarantine facilities for COVID-positive individuals. With centralized quarantine no longer mandated in the country, these facilities will soon become obsolete, leaving local authorities with higher debt but little value in productive assets.

Consumer confidence collapsed in recent months to record low levels. But with domestic travel and movement restrictions gradually lifted, confidence will recover over time. Pent-up consumer demand will return gradually as the COVID-19 situation stabilizes, leading to a recovery in retail sales as well as imports over the coming year. But that consumption rebound may be weak compared to what other countries have experienced, especially because personal income was hard hit by zero-COVID lockdowns and Chinese authorities' reluctance to provide direct support to households.

Beijing’s latest stimulus package designed to deliver more liquidity to troubled property developers will likely lead to some marginal improvements in sales and prices. Greater stability in real estate prices will help mitigate the negative wealth effect of falling asset prices, encouraging more consumption by households. But the underlying structural problems with the sector, including slowing housing demand and local governments’ overreliance on property-related revenues, will remain. Housing is therefore likely to remain a drag on China’s growth in 2023 and beyond.

The Chinese cabinet most recently unveiled a plan for lifting domestic demand through 2035, but its targeted measures amount to little that is new. The goal of more consumption-led growth predates President Xi, but progress has long been slow. In the short term, more direct income support to households, especially for those that have lost jobs and income during COVID lockdowns, may be necessary to revive private consumption. Over the long term, China must tackle the many structural challenges constraining consumption, including high income inequality, a weak social safety net, and financial repression.

1. China’s exports in yuan terms in November 2022 expanded slightly due to a depreciating renminbi.