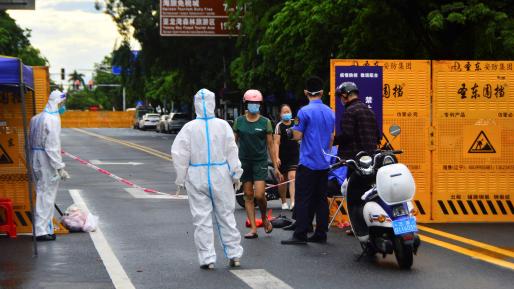 Every summer, Chinese tourists descend on the beach resorts in Sanya on Hainan Island, known as the Hawaii of China. Last weekend, the tourists got an unpleasant surprise when Chinese authorities abruptly locked down the entire city over an outbreak of the highly infectious BA.5 Omicron virus subvariant, trapping tens of thousands of visitors in their hotel rooms. More than a million residents in the city were affected by this latest example of China’s clumsily executed zero-COVID policy, which has taken a heavy toll on the nation’s economy and clouded its economic outlook.

The Chinese leadership has tweaked the lockdown policy, but only on the margin, such as earlier and narrower lockdowns combined with more targeted mass testing. Local authorities in China have continued to impose strict mobility restrictions during outbreaks. The social and economic costs of maintaining zero-COVID are mounting, deepening a general sense of uncertainty in the economy, hurting consumption and investment.

The Chinese economy is in its worst shape since early 2020 after barely expanding in the second quarter of 2022 from the same quarter in 2021. In quarter-over-quarter terms, the economy shrank by 2.6 percent. Given the meager growth in the first half of this year, it must grow at 7 to 8 percent in the second half to achieve the 5.5 percent full-year growth target, which is obviously out of reach. Acknowledging this challenge by implication, the recent Politburo meeting deemphasized the growth target and instead called for “striving to achieve the best possible growth results.” Some analysts agree that US House Speaker Nancy Pelosi’s visit to Taiwan gave Beijing an opportunity to distract the public’s attention from the lockdowns and economic challenges at home with all-out military exercises around Taiwan.

In a world of surging inflation, China’s price increases are moderate, reflecting poor consumer demand. To revive the economy, the government is resorting to its old playbook by spending more on infrastructure, which could have some positive impact. But the hard truth is that the lockdowns have done great damage to the economy, and greater infrastructure spending will do little to revive downstream industries and services that have been depressed by the lockdowns.

Unemployment—especially among migrant workers and young people—in recent months has been alarming. The months-long lockdowns in Shanghai and elsewhere crippled major migrant employers in services. Many migrant workers are in dire need, since no work means no income at all for most migrant workers who are not enrolled in social insurance programs. In the meantime, the youth unemployment rate hit a record high of 19.3 percent in June 2022, much worse than in previous graduation seasons. This year the job market is particularly competitive for young Chinese graduates given a record 10.8 million new college graduates are entering the labor market.

China’s private sector, which typically accounts for four-fifths of urban employment, has borne the brunt of China’s weak growth in the first half of this year and is providing fewer jobs. Presumably, the heightened regulatory uncertainty since last year also has played a role. Alibaba, Tencent, and Didi, among other Chinese tech giants, which are among China’s best-paying employers, are reportedly firing large number of employees as rising regulatory pressures hurt profitability. Beijing is now asking government agencies and state-owned enterprises to hire more young graduates, but job opportunities in the state sector are nowhere near enough. And the incentives that the government is providing to private-sector employers for hiring new workers is too limited to be effective.

What is the endgame?

A recent PIIE blog shows how China’s zero-COVID policy has made the country an outlier in international air traffic. At a time when air travel in the rest of the word is recovering, air traffic in and out of China remains nearly nonexistent. Cross-border flows of people have also dropped substantially. Hundreds of thousands of international students enrolled at Chinese universities are unable to obtain Chinese visas and have been locked out of the country for more than two years. China’s self-isolation under zero-COVID is making it less competitive and less attractive to international investors, expats, and students. It may well accelerate China’s decoupling from the rest the world.

But there seems no sign of a policy reversal anytime soon. The leadership recently told officials across the country that they should look beyond the short term and see the tradeoffs between controlling the pandemic and the resulting social and economic disruptions from “broad, systemic, long-term and political perspectives.” It is concerning that Beijing does not seem to believe that its zero-COVID approach is unsustainable and has not communicated to its people anything about an exit strategy.[1] China will eventually have to exit zero-COVID if it wants to avoid indefinite isolation and paralysis.

Such an exit does not have to be sudden and abrupt. It could be a phased relaxation of mobility restrictions, border controls, and quarantine requirements, implemented in tandem with increased levels of immunity from vaccinations among the vulnerable populations. The low rate of vaccination among the elderly is still the major reason why Beijing feels compelled to resort to lockdowns. The public should also be allowed to discuss and debate different options and access accurate information on the dangers of new virus variants and how the rest of the world has been adapting and reopening. As the world moves into a new phase of the pandemic, China needs to move on too.

1. Recently, the party chief of the Beijing municipality Cai Qi reportedly suggested that zero-COVID in the Chinese capital could remain in place for another five years, sparking huge backlash among residents and on social media.