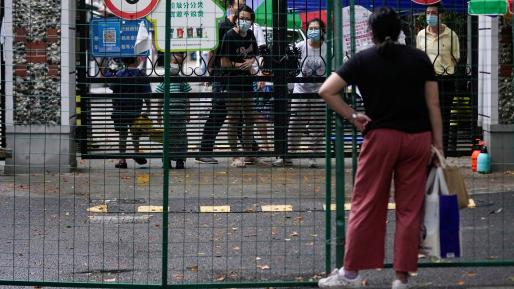 The Chinese government waited until after the 20th Chinese Communist Party Congress was concluded on October 22 before releasing the latest statistics on economic growth. Perhaps that was no accident.

The official statistics of a disappointing 3 percent GDP growth for the first three quarters this year would have likely dampened the celebration of President Xi Jinping’s historic third term as the party’s general secretary. The government’s March target of 5.5 percent growth rate for 2022 is likely to be missed, unless the economy can grow at more than 10 percent in the fourth quarter, which is obviously out of reach. Separately, PIIE projects that the Chinese economy will grow only 3 percent in 2022 and 4.3 percent for 2023.

Many factors have slowed China’s growth outlook, some compounded by policy mistakes. COVID-19 outbreaks, hardships imposed by draconian public health mandates, and sliding property prices all threw shade on President Xi’s big plans for a year of stability. Now slowing global demand for Chinese exports and continuing weakness in the property sector complicate the government’s attempts to revive growth in the coming months.

The Chinese economy fared relatively well in both 2020 and 2021, having avoided the ravages of COVID-19 that plagued other countries. But the discovery of a small number of cases in early 2022 led the government to shut down various locations across the country, including several major industrial centers. A citywide lockdown in Shanghai lasted two months this year, with long-lasting effects. More recently, a new round of lockdowns and mobility restrictions was imposed in Xinjiang, Inner Mongolia, Yunnan, and other locations following case spikes during the Chinese National Day holiday in early October.

The lockdowns, combined with widespread fear of job losses and pay cuts, have battered consumer confidence. Chinese households pulled back spending, leading to a rapid decline in the growth of consumption. The official Consumer Confidence Index, a forward-looking indicator of household consumption, plunged to a record low in recent months, suggesting that consumption will most likely remain weak through 2022 (figure 1). After dropping sharply in the first half of 2022, retail sales growth has only slightly recovered in recent months (figure 2).

Excess inventory at least found an outlet in foreign markets, with net exports driving nearly all the growth in the second quarter of 2022, compensating not only for moribund household spending but also for weak investment spending (figure 3). Even as consumption rebounded in the third quarter, net exports contributed more to growth than investment.  The struggling world economy will make it difficult for China to rely on net exports for growth if domestic consumption cannot be revived in the short term. The International Monetary Fund (IMF) forecasts the weakest global growth since 2001, except for the global financial crisis and the acute phase of the pandemic. The renminbi has depreciated against the dollar in recent months, but on a trade-weighted basis the currency has eased only slightly.

China’s private sector has fared much worse than the state sector amid widespread COVID lockdowns. Growth of revenue, profits, and value-added of private industrial companies lagged that of state firms in the first eight months of 2022, while fixed asset investment by nongovernmental domestic investors expanded at a much slower pace than that of state firms.

Private firms produce more than two-thirds of China’s output and provide four-fifths of urban employment, so their poor performance poses another serious challenge to growth and employment at least in the short term. Meanwhile, output in services, a sector dominated by private firms, contracted outright in the second quarter this year.

China’s long simmering property crisis boiled over in late 2021, when the nation’s second largest developer, Evergrande, missed bond payments and was declared in default by S&P Global. Other property developers hit similar liquidity constraints, squeezed in part by falling home prices and sales and soaring borrowing costs in offshore credit markets. In the meantime, property sales, housing starts, and home prices in China continue to fall sharply. Through September 2022, sales of residential property across China dropped by nearly 30 percent compared with a year earlier, while residential housing starts were down more than 38 percent. Property prices in most Chinese cities continued to decline except in a few megacities like Beijing and Shanghai, where housing demand remains robust.

About two-thirds of urban Chinese households’ wealth is in property, and the sector makes up at least a fifth of China’s output. Declining property prices discourage households from spending, further depressing the outlook for consumption.  With new construction and existing home sales stalled, demand for construction materials and home furnishings remains weak.

The property sector’s financial crisis was directly triggered by the introduction of government regulations in August 2020 intended to gradually reduce developers’ debt exposure. But the ensuing crisis in the property sector is propelled by deep-rooted systemic problems driven by China’s local government reliance on property-related revenues and their willingness to let values rise artificially. Ever increasing prices are incompatible with housing demand, which has likely peaked due to slowing urbanization and population aging. Per capita residential space in China has reached 41 square meters, on par with some wealthy countries, suggesting that further growth in housing demand is limited. For all these reasons, the Chinese property market will likely hamper economic growth for years to come.

With his reappointment as China’s paramount leader, President Xi ushers in a new set of leaders to manage the economy. But aside from revising its zero-COVID policy, which is obviously unsustainable, the new Chinese economic team has few good options to revive growth in the short term. So far this year, Beijing has relied predominantly on monetary policy as a tool of stabilization, but lower borrowing costs have done little to stimulate business and household spending. Moreover, rising interest rates in the United States increase pressure for capital outflows from China, reducing the willingness of the People’s Bank of China to push domestic interest rates down further.

On the fiscal side, the government’s response has been muted partly out of concern over inflation. Fiscal tools in general remain underdeveloped in China, largely because the country has a relatively thin social safety net, and the government has been unwilling to provide direct support to households. It is likely that China will rely on its old playbook—building more state-bank-financed infrastructure—even though the social return on these investments may be low and local governments are already burdened by high debt levels.

The Chinese leadership has signaled that zero-COVID will not be abandoned anytime soon, according to a series of essays published by the People’s Daily, the mouthpiece of the Chinese Communist Party. This aversion to backing away from an ill-considered policy suggests that China’s self-isolation will last well beyond the conclusion of the 20th Party Congress. China has yet to approve and import any foreign-manufactured mRNA vaccines, and its recent negotiations with Moderna have stalled after the company turned down China’s request to hand over the underlying technology. It seems increasingly likely that China will not exit or even ease its zero-COVID policies until it can successfully develop and distribute a domestic mRNA vaccine. In the meantime, a return to more robust growth seems unlikely.