Will Japan Bet the Farm on Agricultural Protectionism?

Talks over the Trans-Pacific Partnership (TPP) trade accord between the United States, Japan, and 11 other countries are at a standstill—largely because of a hardening of Japan's stance toward agricultural protection. President Obama discussed the stalled negotiations with Prime Minister Shinzo Abe in mid-October ahead of the deadline for agreement at the end of the month. To the casual observer, the wavering of Japan's commitment to trade reform may be surprising and run counter to Abe's many statements about the importance of Japan's entry into the TPP for his reform agenda. However, the administration's approval rating is down considerably from its 2013 heights, and the pressure from the much-weakened—but still influential—agriculture lobby has increased as a final deal seemed in the offing.

What is at stake? The gains for Japan from entry into the TPP are substantial, more than what nearly any other member of the agreement would reap. Peter A. Petri, visiting fellow at the Peterson Institute for International Economics, estimates that the agreement would add 2 percent to Japan's GDP by 2025. More broadly, the TPP represents an opportunity for Japan to reinvigorate its unproductive domestic industries (agriculture included) by permitting greater foreign competition. It would also enable Japan to reassert itself as a leader and a model in the Asia Pacific. Facing an uncertain future with China gaining influence in the region, Japan needs to remain strong and dynamic at home, economically enabling it to leverage its technical and market-size advantages to secure its position in the region. These gains are now in jeopardy largely because of Japan's agricultural protectionism.

How protectionist is Japan? To be fair, Japan has made progress on lowering support for agriculture since the 1980s. The United States—the primary objector to the protection afforded to Japan's agricultural sector—also still provides support for its own agriculture sector. However, the magnitudes are starkly different. For every dollar of agriculture production, Japan provides 56 cents of subsidies to farmers. The United States and European Union provide just 7 cents and 20 cents for every dollar, respectively (see figure 1). Additionally, Japan spends nearly 1.25 percent of its GDP on agriculture subsidies (which includes support for producers, as well as consumers). The United States and European Union spend 1 percent and 0.7 percent, respectively (see figure 2). There are also many internal barriers, such as restrictions on the sale and use of farm land and preferential tax structures for farmers, which discourage older generations from leaving or corporate farms from entering the farming sector in many areas.

Who loses from protectionism? Japanese agricultural policy has distorted consumer outcomes for generations. Its 778 percent tariff on imported rice—a staple of the Japanese diet—is infamous among trade experts and has contributed to Japanese households spending more of their discretionary income on food than nearly any other developed country: For the five protected products, Japanese consumers pay as much as six times the world price (see figure 3). As a result, Japanese households spend 14 percent of their disposable income on food, compared with less than 7 percent in the United States. The burden of these costs is greater for people over 65, a large and growing number demographically. Many of these elderly are on fixed pensions and receive negative returns from their large holdings of government bonds, as their interest payments are no longer keeping pace with inflation. Japanese households also face a 5 percentage point hike in the consumption tax rate (assuming next year's tax hike is enacted), which includes food items, which many other developed countries wholly or partially exclude from consumption taxes. The tax, a difficult but necessary step toward fiscal sustainability, will necessarily reduce the discretionary income of Japanese households. At a time when Japan is looking for additional fiscal resources, an elimination of farm subsidies, combined with a reduction or elimination of tariffs on agricultural products, would ease pressure on the budget and also protect households from higher prices.

What is the plan? The government is very aware of the effects of its protection of agriculture. To his credit, Abe has made agriculture reform a centerpiece in his growth strategy. The recently appointed agriculture minister Koya Nishikawa, himself an executive member of the so-called "agriculture tribe" of the governing Liberal Democratic Party (LDP)—one of the party's traditional bases of support—indicated in October that the tariffs on the five products would be "reviewed." But many of the members of the LDP voiced concerns. Three stated goals of the growth strategy released for the agriculture sector earlier this year were: increase corporate participation, expand farmland, and reform agricultural cooperatives. The government has also set a goal of doubling agricultural exports by 2020. These are all laudable goals. However, these reforms will take time and won't help Japanese consumers if they aren't coupled with real changes to import duties on food.

The TPP isn't simply an opportunity. It is also the toughest test for the Abe government to date. A collapse of the talks and a withdrawal by Japan from the negotiating table would be a setback for Abe's broad reform agenda and possibly jeopardize the chances of passing other meaningful reforms, as other entrenched interest groups see that the government can be influenced. The next several weeks are critical for leaders on all sides to consider the stakes and make the tough decisions, hopefully in favor of freer trade and healthier growth. 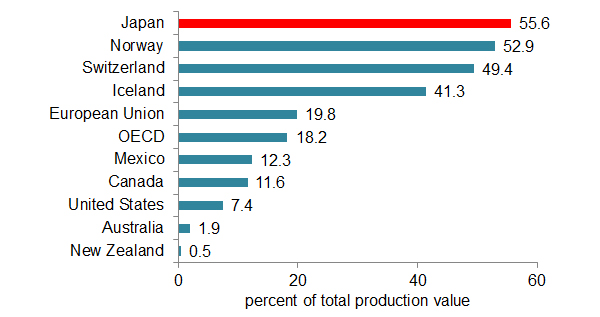 Figure 2 Total agricultural support expenditures as a percent of GDP 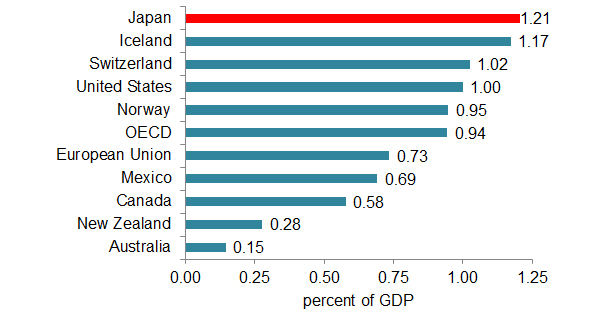 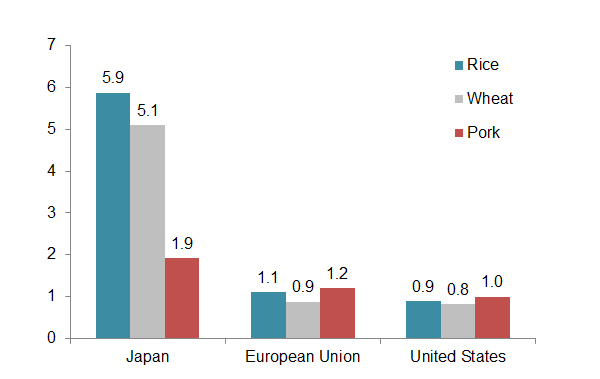 Sources: Organization for Economic Cooperation and Development, US Federal Reserve, and author's calculations.