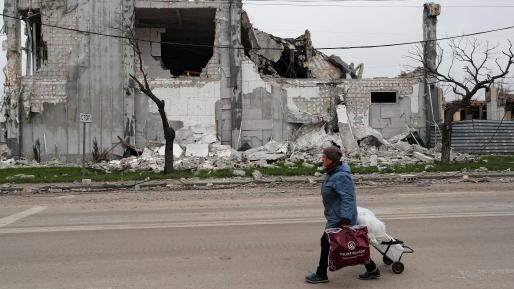 The United States should seize Russian assets for Ukraine’s reconstruction

While the brutal war for Ukraine continues to escalate, it is not too soon to think about eventually rebuilding that devastated country and how to pay for it. An obvious funding source would be the hundreds of billions of dollars in assets of the Central Bank of Russia (CBR), private Russian banks, and Russian oligarchs frozen by the United States, European Union, United Kingdom, and Japan. US officials should act first to seize CBR assets, but Europe and Japan will have to follow suit to secure funds sufficient for a down payment on Ukraine's reconstruction.

Current US law, some of ancient vintage, not only provides for the freezing of foreign assets but also authorizes their seizure and distribution at the discretion of the president. However, seizing Russian assets is such a drastic step that Congress should enact specific new legislation to demonstrate American unity and provide guidance for presidential action. One such bill moving through Congress is aptly titled "Asset Seizure for Ukraine Reconstruction Act." If enacted by Congress, a law of this nature would provide fresh impetus for President Joseph R. Biden Jr. both to seize Russian assets for the benefit of Ukraine and to urge allied countries to do the same.  It would set a precedent for Europeans to take similar action, despite their fears that Russia would retaliate by cutting off oil and gas supplies.

The United States has invoked existing law to seize and use frozen assets to benefit the people of war-torn countries where it has been directly engaged in "armed hostilities." President Biden did so as recently as February 2022 to sign an executive order to help preserve a part of the frozen Afghan central bank assets held in the United States for use in providing humanitarian aid to Afghan citizens living under the Taliban. Washington is now looking to do something similar with frozen Russian assets to compensate the people of Ukraine. But since the United States has not been directly involved in military conflict there, having new legislation specifically tailored to seize frozen Russian assets and use proceeds to compensate Ukraine is better than invoking existing law.

US and other Group of Seven (G7) officials seem to have taken CBR officials by surprise when they froze the assets of the CBR, other banks, and individuals implicated in the invasion of Ukraine in late February. The coordinated action against a major central bank was unprecedented. The CBR had been diversifying its reserves away from the US dollar in recent years as part of an effort to protect the Russian economy against US sanctions but clearly did not expect to be targeted by Europe and Japan as well.

More than half of CBR's international assets, valued at more than $600 billion at the start of 2022, have been frozen by Western officials (see figure). Those held in US institutions reportedly account for only 6 percent of the CBR's total assets, or about $39 billion at the start of 2022, according to unverified data released by the CBR on April 11, 2022. Germany, France, and the United Kingdom together had about $188 billion in CBR reserves in their banks and Japan accounted for another $57 billion. The share of CBR reserves in Germany actually increased from 11 percent in January 2021 to 16 percent in January 2022, suggesting that Russian President Vladimir Putin thought that the prospective opening of the Nord Stream 2 gas pipeline would deter Germany from supporting sanctions against Russia.

Two expansive legal authorities for seizing assets are embodied in the Trading with the Enemy Act of 1917 (TWEA) and the International Emergency Economic Powers Act of 1977 (IEEPA). Each requires certain international conditions before foreign assets can be seized, but the conditions are often satisfied.

Enacted during World War I, TWEA gave the president authority to block foreign trade, freeze foreign assets, and seize foreign assets of any country, not just belligerents, "[d]uring time of war" and dispose of them as he sees fit.[1] The law has even been used for domestic emergencies, such as when President Franklin Roosevelt dubiously cited the TWEA to declare a banking holiday in 1933.

TWEA enabled seizure of German assets during World War I and German, Italian, and Japanese assets in World War II and provided legal authority for economic sanctions against multiple countries through the 1970s. Congress has not officially declared war on any country since World War II, but US courts have ruled that the law applies when the president as commander in chief launches military strikes abroad. In plain language, TWEA powers are always available to the president, since the United States is continuously engaged in military operations abroad, either regular forces or special operations.

In 1977, President Jimmy Carter signed the IEEPA, designed to update the TWEA. IEEPA allowed the freezing of foreign assets but not their seizure. In 1979, Carter used IEEPA to freeze Iranian assets (rendering them unavailable either to Iran or to US claimants) after Iranian revolutionaries captured the US Embassy and imprisoned American hostages. Later, President Ronald Reagan reached an agreement with Iran to free the hostages and distribute the frozen assets both to US claimants and to Iranian authorities.[2]

Following the 9/11 attacks, Congress passed the USA PATRIOT Act of 2001, which added new authorization to IEEPA for seizure of assets from belligerent countries and their nationals in the event of "armed hostilities", and their disposition as the president sees fit.

President George W. Bush invoked the revised IEEPA law in 2003 before the invasion of Iraq to use Iraqi assets to "assist the Iraqi people and to assist in the reconstruction of Iraq." Later orders expanded the use of these assets for humanitarian and reconstruction needs.

The use of the IEEPA in the seizure of  Afghanistan's central bank assets has been more complicated. After the Taliban takeover of Afghanistan in August 2021, lawyers representing 9/11 victims sought assets of the Afghan central bank, Da Afghanistan Bank (DAB). A legal question to be decided is whether the Taliban now controls DAB. If US courts rule that it does, plaintiffs can seize central bank assets under existing US laws. Meanwhile, President Biden has invoked IEEPA to insulate $3.5 billion of DAB assets from plaintiff suits so that the funds can be used for humanitarian aid to Afghan citizens.

The obstacle to invoking IEEPA to seize Russian assets is that the United States is not engaged in "armed hostilities" with Russia, nor has Russia "attacked" the United States.[3] Using established law, President Biden would need to invoke Section 5(b) of the TWEA to seize and dispose of Russian assets, recalling that TWEA powers exist whenever the United States is engaged in hostilities someplace in the world, however remote from the assets seized. But since the TWEA is such an ancient statute and has "war" prominently written in its text, and since seizing assets is a drastic step, President Biden might well prefer fresh authorization from the Congress.

Will tough US sanctions deter Russian aggression in Ukraine?