Adapted from a June 15 posting on the Council on Foreign Relations website.

A couple weeks ago, Michael Levi wrote about the Chamber of Commerce's new Energy Security Risk Index and raised the question of "how various energy and climate bills being debated in Congress score" on the index.

The chamber has said in the past that a climate bill must balance emissions reductions with economic and energy security concerns, and has concluded that past bills failed on the latter. It has also expressed more openness to Kerry-Lieberman than it has to past climate bills. It will be interesting to see whether it changes its tune this time around, given what its own energy security risk index concludes.

We published an accessible summary of our results over at Slate. This post provides the technical details, methods, and assumptions underlying our broad conclusions.

Figure 1 shows our projections for the Chamber of Commerce Energy Security Risk Index with and without Kerry-Lieberman.

The chamber splits its index into four components: geopolitical, economic, reliability, and environmental. The four figures below show our projections for these four components with and without Kerry-Lieberman. 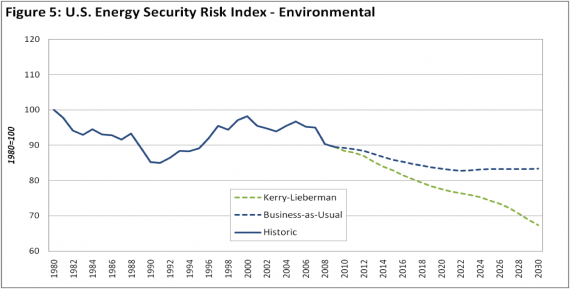 Those four components are in turn built from 37 factors. A table showing our results for those factors (with and with the bill), along with the data underlying figures 1–5, can be found here .

The chamber projects values of its energy security risk index through 2030. Its main source for the data underlying those projections is the Energy Information Administration (EIA) Annual Energy Outlook (AEO), which is generated using the National Energy Modeling System (NEMS). Last month Trevor and his team ran NEMS to simulate what the AEO would look like if Kerry-Lieberman was passed, which was published by the Peterson Institute for International Economics. (That report can be found here and a detailed methodology for how the bill was modeled in NEMS here.) We used the results of that analysis to recalculate the chamber's energy security risk index.

The chamber also uses the EIA International Energy Outlook (IEO) for a small number of its projections. We did not have access to several of the modules underlying the IEO. In each case where we were unable to precisely determine the impact of Kerry-Lieberman on IEO projections, we made approximations that underestimate the value of the bill. Greater detail on those approximations is provided below.

The chamber uses numbers from the AEO and IEO to generate 37 risk indices. The transformations from underlying data to those indices are mostly, but not entirely, described in the chamber's publications. We thus had to determine the appropriate transformations in several cases. Our choices are described in detail below.

2. Security of World Oil Production: This measure is defined as "global oil production weighted by (1) each country's Freedom House freedom ranking and (2) a diversity index applied to global oil production." The chamber calculates this using projections in the IEO, which we are unable to generate. According to the AEO, though, Kerry-Lieberman would increase US production, decrease Middle Eastern production, and leave all other production values unchanged. This would improve the freedom-weighted production estimate, as well as improve diversity, since production would shift from a larger player (Middle East and/or Saudi Arabia) to a smaller one (the United States). One should thus expect security to improve on this front. To be conservative, then, we simply assume that this dimension of security is unchanged by the bill.

4. Security of World Natural Gas Production: This measure is defined as "global natural gas production weighted by (1) each country's Freedom House freedom ranking and (2) a diversity index applied to global natural gas production." The chamber uses data from the IEO, which we are unable to generate, to produce this. Indeed we would expect this measure to worsen under the bill, since the bill reduces domestic natural gas production while having a minimal effect on gas production elsewhere. We therefore estimate the maximum impact that the bill might have on this risk factor. To do that, we assume that global production is reduced by the same amount that US production declines under the bill, and assign the US a freedom ranking of zero (rather than its actual value, which is one). This results in an increased security risk of 0 to 2 percent. We also note that lower US production will improve the market concentration index; to be conservative we assume that the concentration index is unchanged by the bill.

7. Security of World Petroleum Imports: This measure is defined as "net petroleum imports as a percentage of total US petroleum supply adjusted to reflect (1) each country's Freedom House freedom ranking and (2) a diversity index applied to non-US oil-producing countries." The percentage of oil imported is projected using the AEO, so we are able to determine the effect of Kerry-Lieberman using NEMS. The distribution of production is calculated using the IEO, which we are unable to generate. We note, however, that NEMS projects that US imports will decline by the same proportion from each exporting country under Kerry-Lieberman. As a result, this part of the index should be unchanged by the bill.

8. Security of US Natural Gas Imports: This measure is defined as "net natural gas imports as a percentage of total US petroleum supply risk adjusted to reflect (1) each country's Freedom House freedom ranking and (2) a diversity index applied to non-US natural gas–producing countries." The percentage of gas imported is projected using the AEO, so we are able to determine the effect of Kerry-Lieberman using NEMS. The distribution of production is calculated using the IEO, which we are unable to generate. We assume that the bill affects non-US gas production primarily through the change in US demand for liquefied natural gas (LNG) (which declines). The result is likely to be lower production from Qatar, which improves the freedom-weighted production index and also improves diversity. To be conservative, then, we assume no improvement in the risk associated with a unit of imported gas. To check the robustness of our conclusions, we simulated a case where the risk associated with a unit of imported gas increases by 50 percent in all years. This has no impact on our projections for 2030, since US natural gas imports (under the bill) drop to zero at that time. In 2020, such a change would increase the risk index under the bill from 95.9 to 96.5, which is still considerably lower than the value of 99.0 that is projected without the bill.

25. Electricity Capacity Diversity: Electricity capacity diversity is calculated as a "market share concentration index (Herfindahl-Hirschman Index, HHI) of the primary categories of electric power generating capacity, adjusted for availability." The chamber does not provide the availability factors that it uses, nor does it provide a source for those. In addition, the AEO groups generating capacity into 16 different categories; the chamber does not explain how it consolidates those into five groups. We made the following assumptions. First, we did not adjust generating capacity figures for availability. This will tend to underestimate the impact of the penetration of renewable and nuclear energy, which both tend to have higher availability than other electricity sources. Since penetration of renewables and nuclear should improve diversity, this leads us to underestimate the improvements in this measure that the bill produces. Second, we grouped the categories generated by the AEO into coal; oil and gas (which includes oil and natural gas steam, combined cycle, and combustion turbine and/or diesel); nuclear; and renewables (which includes hydro). This generates an HHI that has 98.6 percent correlation with the chamber's measure for this category over the period 2008–30, underestimating it by at most 2.5 percent (in 2030). In our projections, the electricity capacity factor improves by 31 percent in the Kerry-Lieberman case relative to the baseline. If we were to (very conservatively and unrealistically) assume that there was, in fact, no improvement whatsoever due to the bill, the overall energy security risk index in 2030 would be 89.8 instead of 89.3, a decrease of 7.6 percent relative to the baseline instead of 8 percent.

26. Electricity Capacity Margins:The chamber projects a steady increase in risk (and decrease in margin) from 2009–12, based on EIA Form EIA-411 data, and then assumes that the value of this measure is constant from 2012–30. We have not been able to assess the impact of Kerry-Lieberman on this factor. However, we would not expect Kerry-Lieberman to have a significant effect on this measure as assessed using the chamber's methodology. In the extreme (and highly implausible) case that Kerry-Lieberman causes this risk measure to be 50 percent greater than the chamber projects, the overall energy security risk index in 2030 would be 90.3 instead of 89.3, a decrease of 7 percent relative to the baseline instead of 8 percent.

27. Electric Power Transmission Line Mileage: The chamber projects 2009–18 values using North American Electric Reliability Corporation (NERC) projections, and assumes that the value will then remain constant from 2018–30. We use the chamber's values for our policy case. This will tend to underestimate the value of Kerry-Lieberman in lowering energy security risk for two reasons. First, by promoting investment in long-distance transmission, Kerry-Lieberman is likely to increase the number of circuit-miles of transmission lines present. Second, this measure is calculated as a ratio of circuit-miles to peak summer electricity demand; by lowering demand, Kerry-Lieberman would improve this ratio.

28. Passenger Car Average MPG: Our simulation of Kerry-Lieberman generates no improvement of passenger car average miles per gallon (MPG). The bill, however, instructs regulators to develop stronger Corporate Average Fuel Economy (CAFE) standards, which would tend to improve this element of the risk index. Our simulation thus underestimates the value of the bill in reducing the energy security risk index.

31. Energy-Related Carbon Dioxide Emissions: The chamber explains that it converts emissions to a risk index by simply normalizing its data series so that the index equals 100 in 1980. Examination of the underlying data and the index indicate, however, that a linear (rather than proportional) transformation has been used. We determined the coefficients for that transformation, based on the figures presented by the chamber, and used those to predict the impact of the bill.

Ending the Crisis without Starting Another: A "Green" Global Recovery?

The Challenge of Climate Change (in One Chart)