The pandemic adds momentum to the deglobalization trend

The COVID-19 pandemic is driving the world economy to retreat from global economic integration. Policymakers and business leaders are now questioning whether global supply chains have been stretched too far. In an environment where alliances are uncertain and international cooperation is absent, they are also asking whether they should reduce their economic interdependence. National security and public health concerns are providing new rationales for protectionism, especially for medical gear and food, and an emphasis on domestic sourcing.

This retreat will not mark the end of globalization, a process that has reached a historically high level. But globalization can be reversed, at least partially. The Great Recession of 2008–10 marked a historic turning point in the degree of global economic integration. Now, in response to the current health and economic crisis, policymakers appear poised to take deliberate steps to reinforce the movement toward deglobalization.

These steps threaten to slow or reverse the economic growth delivered by globalization. Even worse, new restrictions on trade could proliferate and inflict damage that could take decades to reverse.

Globalization comprises many different elements: cross-border flows of trade, investment, data, ideas, and technology, not to mention people, including workers, tourists, and students.

Global trade, measured by the ratio of world exports to world GDP, is a reasonable proxy for economic integration. The figure below reveals five periods of modern globalization. 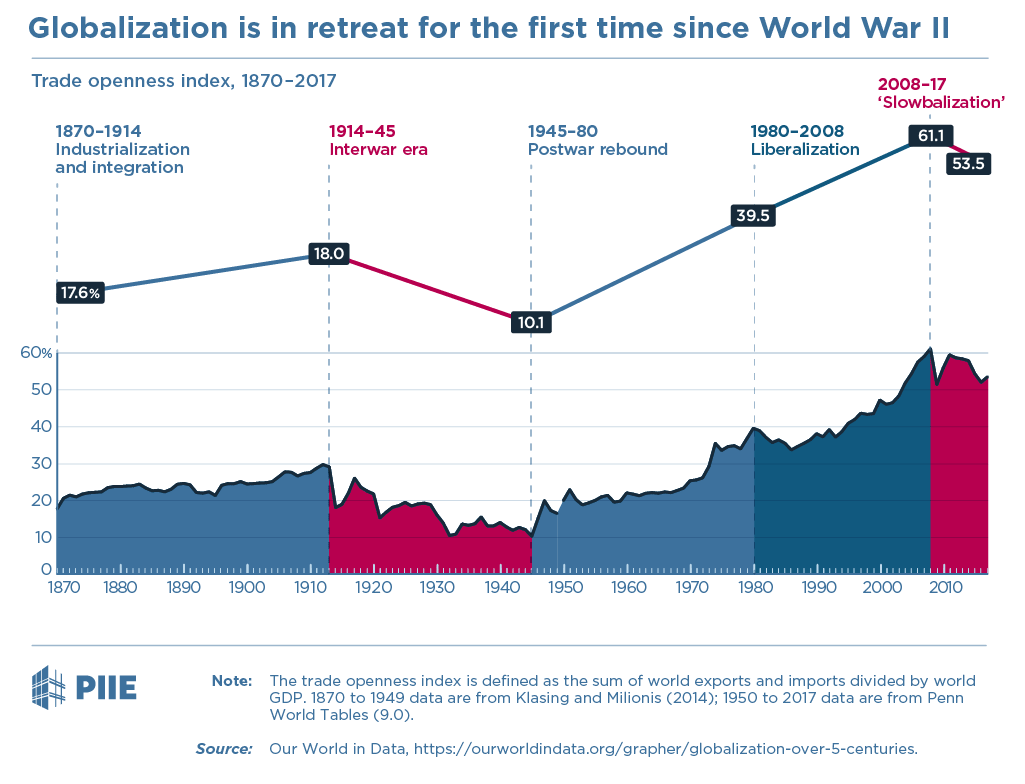 In the first period from 1870 until 1914, economic integration increased, driven by the steam ship and other advances that allowed more goods to be moved more cheaply between markets.[1]

Globalization reversed in the second period, from the outbreak of World War I in 1914 until the end of World War II in 1945. World War I produced prolonged economic dislocation, which included the withdrawal of Russia from world trade after the communist revolution in 1917, the Spanish flu pandemic in 1918, monetary instability in the early 1920s, new immigration restrictions, the Great Depression starting in 1929, and a severe outbreak of protectionism in the 1930s. This turmoil reduced integration and the world economy suffered.[2]

Economic integration rebounded in the third period, the three decades after World War II. American leadership helped create new institutions for economic cooperation, such as the General Agreement on Tariffs and Trade, enabling countries to open their economies once again to trade and investment. These steps helped usher in a golden age of growth.

Yet the geographic scope of this third phase—confined to the United States, Western Europe, Japan, and a few other countries—limited how far world economic integration could go. The Soviet bloc of communist states and China were nonmarket economies that did not participate for political and economic reasons. The developing world in Latin America, South Asia, and Africa chose their own path of import substitution and remained relatively isolated.

During the fourth period, from the 1980s until the financial crisis of 2008, economic integration rose to a historically unprecedented global scale.[3] Led by China and India, developing countries began dismantling trade barriers. The Soviet bloc in Eastern Europe moved toward democracy and economic liberalization with the fall of the Berlin Wall in 1989, followed by the collapse of the Soviet Union in 1991. Changes in technology—the shipping container and improvements in information and communication technology—also fueled integration and led to the creation of global supply chains. Global growth was strong and world poverty fell significantly.[4]

We are now in an era of "slowbalization," or peak globalization

As measured by trade flows, this fourth era of globalization appears to have peaked in 2008. As the figure above shows, the world trade to GDP ratio has fallen off since the Great Recession. World trade bounced back in 2010 from the sharp blow in 2009, but it has faltered ever since. We are now in a fifth historical period, sometimes called “slowbalization.”

While trade has tended in past decades to grow more rapidly than world output, that is no longer the case. Instead, trade growth has been abnormally weak in recent years. World trade volume actually fell in 2019, even though the world economy grew fairly steadily.

A number of factors have been at work. The growth of global value chains—the spread of supply networks across countries—has flattened.[5] The reform agenda has stalled around the world. Under President Xi Jinping, China began to turn inward with policies to promote the indigenous development of leading industries (the Made in China 2025 initiative, abandoned in name if not practice). China remains an export powerhouse, but exports as a share of its GDP have fallen from 31 percent in 2008 to just 17 percent in 2019, as Nicholas Lardy has noted.

Under President Donald Trump, the United States has embraced an “America First” policy, shifting away from trade liberalization (withdrawing from the Trans-Pacific Partnership) and moving toward protectionism. The Trump administration imposed tariffs on imports of steel and aluminum ostensibly on grounds of national security, prompting retaliation and the spread of trade barriers elsewhere.

The United States also initiated a trade war with China over its unfair trade practices, significantly reducing bilateral trade. President Trump’s economic advisers have equated economic security with national security and have spoken about their desire to rip up the supply chains that leave the United States dependent on China. The tensions between the United States and China have weakened their relationship in what some call a “decoupling” between the world’s two largest economies. Decoupling does not mean that integration shrinks to nothing, only that it is reduced, perhaps substantially.

Thus, even before the pandemic hit, several factors were reducing globalization.

The pandemic has added fuel to the trend away from globalization

The COVID-19 pandemic simply adds further momentum to the deglobalization trend. The World Trade Organization has forecast that world trade will decline between 13 and 32 percent in 2020, much more than the expected fall in world GDP.

More important is the way countries now think about economic integration. President Emmanuel Macron of France has said that the coronavirus “will change the nature of globalization, with which we have lived for the past 40 years,” adding that it was “clear that this kind of globalization was reaching the end of its cycle.”

The pandemic has reinforced concerns around the world that supply chains have gone too far. Export bans have been imposed over concerns about inadequate domestic production of medical equipment, personal protective equipment, and pharmaceuticals. Such policies will exacerbate shortages, the opposite of their intended effect. (In the food crisis in 2012, export bans drove up world prices and made short-term shortages even worse.) Protectionism is proving to be no substitute for stockpiling and preparedness, which have been inadequate in recent years.

Past experience suggests that when some countries start restricting trade in critical goods, others are likely to follow suit. This is nothing new. As Adam Smith pointed out in his Wealth of Nations long ago: “The very bad policy of one country may thus render it in some measure dangerous and imprudent to establish what would otherwise be the best policy in another.”

Experience also suggests that fear leads countries to turn inward. Many countries are now rethinking trade dependence. Phil Hogan, the European Union’s commissioner for trade, has stated, “we need to think about how to ensure the EU’s strategic autonomy.”[6] Scott Morrison, Australia’s prime minister, told parliament: “Open trading has been a core part of our prosperity over centuries. But equally, we need to look carefully at our domestic economic sovereignty as well.” Japan has also begun investigating how to break its supply-chain dependence on China and produce more at home.

The risk of overreaction and a slide to protectionism is compounded by the failure of leadership in the United States, leaving a vacuum in the world trading system. The absence of a coordinated and cooperative response could accelerate destructive beggar-thy-neighbor policies not seen since the 1930s.

The world economy is at a critical inflection point in history in which fears about dependence on others are growing. An inward turn would not spell the end of globalization, only a partial reversal. But undoing the resulting damage is likely to prove difficult.

3. This was the era of what John Williamson called the Washington Consensus that favored economic liberalization.

4 Of course, while policy changes and technological improvements were reinforcing each other, there was also a limit to this process. Absent policy reforms and progress in new innovations, these one-time changes would eventually have diminishing returns in terms of their impact on economic integration.

5. This is the theme of the World Bank’s 2020 World Development Report.

6. Fortunately, he added: “Strategic autonomy does not mean that we should aim for self-sufficiency. Given the complexity of supply chains, this would be an unattainable goal. We need an evidence-based discussion on what it means to be strategically autonomous.”

Novel viral variants: Why the world should prepare for chronic pandemics