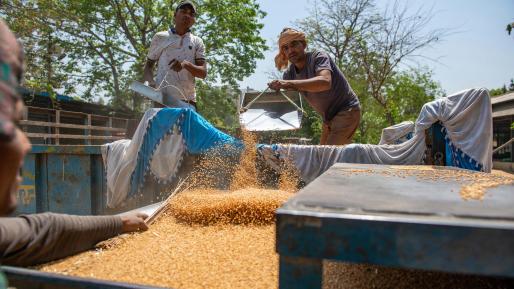 The Indian government's May 14 ban on wheat exports has roiled markets and been widely assailed as potentially aggravating near record-high wheat prices and shortages caused by Russia's war in Ukraine. But in the absolute sense, the impact on traded volumes will be relatively minor, and markets—which spiked once trading resumed following the weekend when the ban was imposed—have calmed, even as prices remain high because of war, persistent supply chain issues, and higher fertilizer and shipment costs.

During price crises—especially unexpected crises brought on by less anticipated non-weather-related factors, including export restrictions in major exporting countries—food-exporting countries restrict their exports to ensure adequate domestic supplies and curb inflation, thereby shielding their consumers (and voters) from price increases. To some extent, these policies are successful, both in terms of reducing prices (India's domestic wheat price dropped 10 to 15 percent on the news) and shoring up political support.

As a result, India's move has been unpopular with farmers who have been cut off from continuing to benefit from record-high prices but welcomed as a check on food price inflation, especially by urban consumers.

During the 2007–08 food price crisis, India and Indonesia enacted export restrictions that were largely successful in insulating domestic markets from international price pressures. Their incumbent governments were both reelected in 2009, partly based on their success in stabilizing food prices. Export restrictions can have a positive effect on public opinion: They are a clear signal the government is "doing something"—and something seemingly very straightforward. On the other hand, textbook liberal orthodoxy might lead food-exporting governments to respond less straightforwardly and politically effectively. Reaping the benefits of lucrative exports and addressing domestic food access issues with targeted transfer payments to consumers are less conspicuous policy instruments that fail to persuade middle class voters not covered by means-tested benefits.

But export bans impose a variety of economic losses. Domestic producers neither get accurate demand signals nor benefit from higher prices in global markets. In the short run, such policies depress farmers' incomes and export revenues, amounting to an "implicit tax on farmers," as Ashok Gulati, former chairman for India's Commission for Agricultural Costs and Prices, has characterized them. Moreover, export bans are classic beggar-thy-neighbor policies that throw the costs of adjustment onto importing countries. And these costs rise as more countries put them in place. Export restrictions may have added as much as 45 percent to world rice prices and 30 percent to wheat prices during the 2007–08 crisis.

Export bans are also grossly inefficient ways of addressing food security concerns, as much of the benefit of lower prices accrue to comparatively well-off households. Over the longer term, they distort incentives for farmers to invest in expanding productive capacity, which is necessary to increase supply and bring down food prices—both locally and globally. If the government simply cuts off access to lucrative markets every time demand rises, why plant and invest to meet said demand? Politically, export bans fall into the "bad economics, good politics" category, especially in authoritarian and/or more urbanized societies where urban bias prevails and the median voter is an urbanite who ostensibly benefits from lowered prices.

The Indian government carefully designed the export ban to include two major caveats that strengthen India's global standing. They also soften the blow to global food supplies. First, the government said the ban would not apply "in cases where prior commitments have been made by private traders." Shipments registered with the Indian customs authority before the ban was instituted are exempt. Second, the government will allow shipments on a discretion-based system to "support the needs of neighboring and other vulnerable countries." In announcing this discretion, Modi is turning bulk grain shipments into a tool of foreign influence and foreign policy and, depending on how that discretion is exercised, massively attenuating any real effect of the ban on global supply.

The first shipments of exempted wheat are destined for Egypt, a country that had been highly dependent on Black Sea wheat exports and has been scrambling to secure supplies. Just days after the announced exports, the Egyptian ambassador to New Delhi, Wael Hamed, indicated that Egypt is "very much interested in building relations with India," citing uncertainty around Ukraine and Russia as trade partners moving forward. Modi may be able to capitalize on the food price crisis to further expand India's influence over and involvement in the Middle East. For its part, Egypt should be wary of simply trading dependence on Black Sea wheat for that from India alone and should seek to diversify supply in the longer term. But for the moment, India is providing a much-needed lifeline that should build significant political capital.

The domestic politics for Modi are more complicated. The Bharatiya Janata Party—Modi's party, better known as the BJP—won the 2019 elections overwhelmingly, in part due to its performance in rural and semirural constituencies. The export ban is not likely to win much favor with rural voters, especially in India's northern wheat-producing states. But Modi's government has delivered on other rural priorities including expanded electrification and access to toilets. In addition, its coalition's majority has such a dominant share of seats that the BJP could afford to lose ground in some rural constituencies. And Modi can certainly point to a potentially dire situation had the ban not been announced: Domestic wheat stocks are at a six-year low at a time when uncertainty is high.

Ultimately, the impact of India's export ban on markets may be modest, allowing the Modi government to build political capital with trading partners while having few lasting effects on local prices and supplies, especially if exemptions are extensive. But the ban's likely suppression of wheat production is another dark omen for a global economy struggling to provide adequate food supplies at sustainable prices.