MEMORANDUM ON Protecting Innovation and National Security
To: Under Secretary of Commerce for Industry and Security

Background: Export controls designed to protect US national security, innovation, and intellectual property are one of the most powerful tools available for economic statecraft, but they must be used carefully. If they are overused, they encourage firms to move their research, development, and production overseas to avoid controls, the risk of which is greater than ever because of globalized supply chains and attractive alternative locations for research.

Nevertheless, export controls, when implemented properly, especially with respect to China, can be a useful tool to maintain US leadership and capacity for innovation in key technologies and keep China and other competitors reliant on US technology. Such an outcome serves US interests far better than “decoupling” from China in a way that would threaten to deprive US firms of Chinese talent, investment, and markets.

Below are recommendations for employing export controls that can help rebuild the US and global economies after the COVID-19 pandemic.

Priority 1: Adapt export controls to a world connected by globalized supply chains and many centers for R&D

The United States dominated the global innovation landscape with over two-thirds of global research and development (R&D) spending in the 1960s; today’s competitive environment has diminished that share to less than a third (figure 1).

Even US multinational firms increasingly perform R&D in countries like China and India that are not traditional US allies, and thus less likely to go along with US export controls (figure 2). 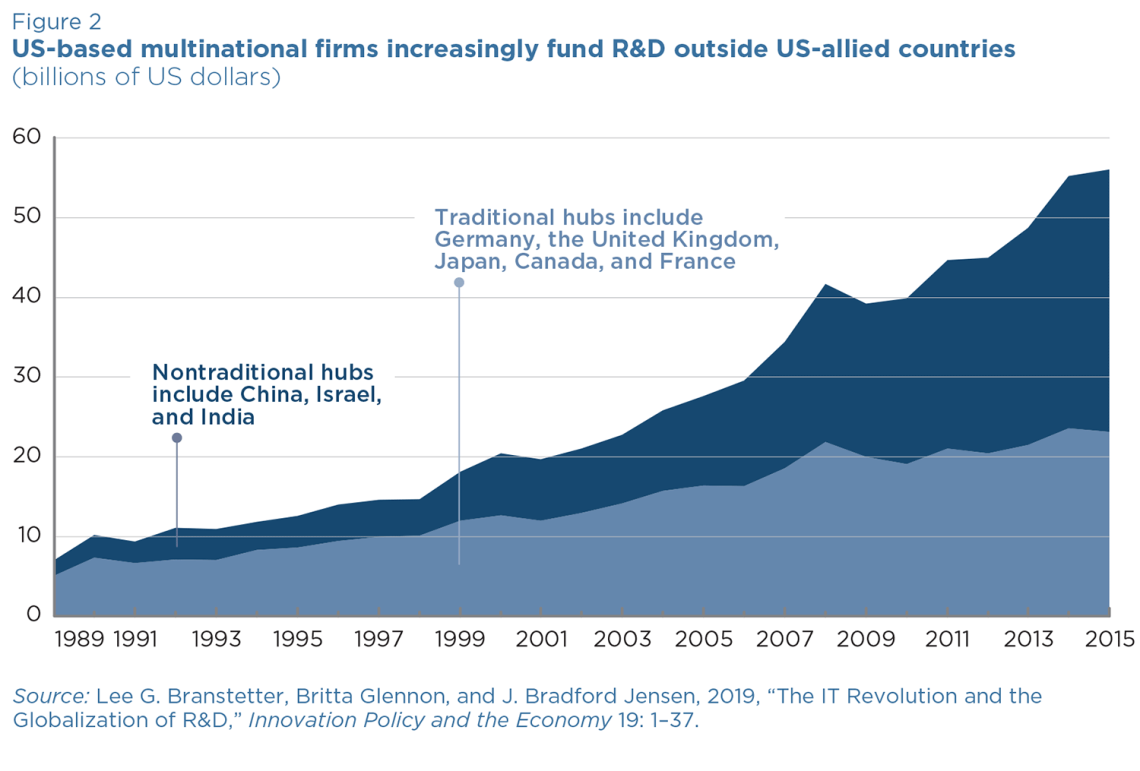 Since firms already have well-developed, competitive innovation ecosystems abroad, unilateral controls—or even those shared only among US security allies—are more likely to backfire, giving other jurisdictions the investment and jobs.[1]

No US policy can reverse this shift. The Commerce Department’s Bureau of Industry and Security (BIS), which oversees issues of technology and national security, must adjust to this new reality in which controls have both less leverage and higher potential costs. Export controls and licensing procedures that put an undue burden on US exporters incentivize them to move abroad to avoid losing revenues that they need to remain internationally competitive. Since top talent increasingly comes from outside the United States as well, export policy should ensure that US firms maintain the ability to hire the best international talent by not overusing deemed export restrictions.

Priority 2: Use “small yard, high fence” as the guiding principle for export restrictions

Controls will be more effective with a “higher fence.”[2] The BIS’s limited resources should be focused on rigorously enforcing controls on the most critical technologies and goods. More narrow controls are more likely to secure compliance from allied countries and also gain their buy-in to adopt similar controls. The process of determining what should be inside the fence will identify areas crucial to keep cutting-edge US technological out of the hands of strategic rivals, thus potentially restricting access to key building blocks like semiconductor manufacturing equipment (SME) or design tools when such actions could effectively block import substituting industrial policy or prevent countries and firms from profiting from stolen intellectual property. At the same time, limiting the scope would relax outdated or ineffective restrictions, like those on most products that are far from the cutting edge or on widely available commodity products.

The COVID-19 epidemic has put China in a negative light around the world, a political shift that has expanded support for multilateral controls that would not have passed even a year ago. The United States should capitalize on this trend and strengthen existing fora like the Wassenaar Arrangement, a multilateral agreement on technology controls established in the 1990s. But Washington should also build smaller coalitions of the willing with key suppliers of goods like semiconductors, where interests align in blocking import substituting industrial policy that aims to supplant foreign suppliers. All it would take to put controls on the majority of global SME exports is for Japan and the Netherlands, both US securities allies, to join US controls. If Korea and Taiwan joined, just under two-thirds of the global export market would be covered, according to forthcoming research from my PIIE colleague Chad P. Bown.

Priority 4: Incentivize Chinese dependence on US technology and inputs well into the future by using the entity list more judiciously

The unprecedented rise in entity listings and rule changes that place restrictions without a clear path to removal through behavior changes has disrupted US-China relations, encouraging Chinese leaders and businesses to see the United States as an unreliable technology supplier. In the past, for example with ZTE, the Chinese company accused by the United States of selling banned technology to Iran and North Korea, the rationale for the company being added to the list was more clearly defined, as were the behavioral changes or deals that could get it removed.

The latest export control policy has put American firms at a competitive disadvantage in the Chinese market and incentivized China to double down on self-sufficiency. Both US and foreign firms have reported privately that Chinese buyers, even those not in sensitive sectors, are requiring certification that their supply chains are outside the reach of US export controls. China’s concerns are encouraging foreign firms to eliminate American participation in global supply chains. Any security advantage from this change in policy has come with a cost. The United States is reducing its ability to understand Chinese capabilities and weakened its control over technology access that occurs when Chinese firms rely on US technology.