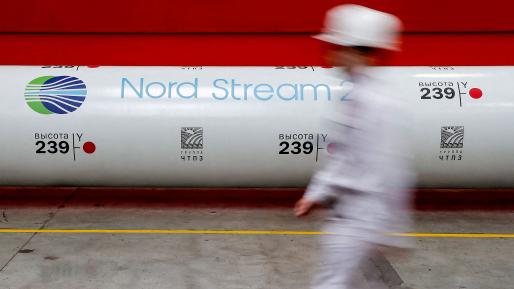 The author thanks Megan Hogan for her extensive research on Russia’s pipeline network and for assembling the data on European and Russian gas markets for this analysis.

Pressure is mounting in Europe and the United States to block the Nord Stream 2 pipeline from bringing new supplies of Russian gas to Germany if Russian military forces invade Ukraine. Such a step would deprive Russia of substantial export revenues, but Europe would be giving up gas imports needed to mitigate its current energy crisis. Europe has limited near-term options to replace Russian gas imports with supplies from other countries. On the other hand, blocking Nord Stream 2 could prompt European officials to speed up their needed transition away from fossil fuels and dependency on Russian resources.

Germany, the European terminus of the pipeline, has long resisted calls to cancel Nord Stream 2, given its strong commercial ties with Russia. But that could be changing as Russian troops amass on the Ukrainian border. German chancellor Olaf Scholz said on January 18 that "there will be a high price to pay" if Russia invades Ukraine, suggesting Germany might join the sanctions against Russia and Nord Stream 2 if diplomacy does not defuse the crisis.

President Vladimir Putin of Russia may be calculating that Europe cannot afford to cancel the pipeline. Europe has suffered a gas crisis throughout 2021 that continues today: Economic recovery fueled a big spike in demand, while European gas production continued to shrink as the aging Dutch Groningen and other fields are literally running out of gas.

The International Energy Agency (IEA) reported that European gas consumption rose 14 percent in the first half of the year compared to 2020; prices skyrocketed, denting demand in the second half of 2021 and causing some utilities to switch to coal-fired power generation to the dismay of environmentalists. Gas imports did not increase enough to cover the shortfalls, although small volumes of liquefied natural gas (LNG) were diverted from Asian markets to Europe. Gas inventories were not adequately restocked. Total European gas storage was down to 47.6 percent of capacity on January 15, 2022 (54 billion cubic meters, or BCMs) compared to 62.5 percent a year earlier. The head of the IEA, Fatih Birol, accused Gazprom of limiting exports to Europe in the fourth quarter of 2021 and largely causing the inventory shortage by underfilling its own storage facilities in Europe to meet domestic demand and filling Russian gas reserves instead.

If Nord Stream 2 were to become operational later this year, it would provide near-term relief, transporting an additional 55 BCMs of gas annually (equivalent to 10 percent of current European gas consumption), helping to relieve tight gas supplies that have fueled a more than five-fold price increase over the past year. But Nord Stream 2 also would increase the dominant position of Gazprom, Russia's monopoly pipeline exporter, in the European market and increase the risk of future market manipulation; indeed, Western officials worry that Gazprom might decide to stop flows of gas to Europe that transit Ukraine (about 40 BCM/year) when its current contract expires in 2024.

Europe's gas options are limited in the near term

Since 2014, European production of natural gas has declined by about one-quarter and consumption has risen by 10 percent. Imports from Russia account for about 35 to 40 percent of gas consumption before any gas flows through Nord Stream 2. European demand is likely to remain strong over the medium term; currently gas is used to generate a fifth of European electricity (renewables and nuclear produce 24 and 22 percent, respectively). As Europe transitions from fossil fuels, gas is favored over coal for environmental reasons, and compensates for reductions in nuclear generation in countries like Germany, where concerns about nuclear power are significant. To meet this demand, Europe needs to increase its imports of pipeline gas and LNG at least over the medium term while it generates more renewable energy and intensifies energy efficiency.

Canceling Nord Stream 2 would still leave Europe dependent on Russian gas. Gazprom already has a large network of pipelines linking Russian gas fields with European markets. The largest volume of gas flows through the current Nord Stream pipeline to Germany, and also via the Yamal pipeline through Belarus to Poland, the Blue Stream and TurkStream pipelines to Turkey, and UPU/Progress and Soyuz pipelines through Ukraine to Slovakia with a small amount also directed to Poland, Hungary, and Romania. Together, Russian pipelines sent about 168 BCM of gas to Europe in 2020. Nord Stream 2 would increase Russian pipeline exports by a third.

Europe is not without other energy suppliers; European LNG imports contributed 115 BCM in 2020, primarily from Qatar, the United States, Russia, Nigeria, and Algeria. But Russia remains the main supplier. In 2020, European gas imports by pipeline and LNG tanker totaled 326 BCM, of which 185 BCM or about 57 percent came from Russia.[1]

In the near term, Europe has limited options for additional gas supplies if Nord Stream 2 is blocked or other flows from Russia are reduced. Norway's production has been stable for the past decade and could cover a small amount of the shortfall. LNG exports from the United States and other suppliers are slowly increasing but ramping up LNG trade requires large investments in degasification plants and LNG import terminals and takes years to become operational. As a result LNG does not offer the prospect of substantial near-term relief.[2] Switching to coal or nuclear for power generation is the fallback option but is politically contentious because of environmental and safety concerns.

Russia's dependence on Europe as a customer for its natural gas is an uncertain factor in the standoff over Ukraine. Sales to Europe via pipeline and LNG tanker in 2019–20 represented about 38 percent of Russia's gas production and 80 percent of its gas exports (see figure below). Since 2014, Russia has been intent on relying less on Europe as a customer, signing a 30-year deal with China to build the Power of Siberia pipeline that is planned to provide 38 BCM annually to China. The Siberian pipeline became operational in 2019; reportedly 10 BCM of Russian gas flowed to China in 2021, and the volume expanded well above contracted levels in the final quarter of the year. Russia hopes to build a second pipeline to China as well. But for the near to medium term, Russia needs the European market, which generated $100 billion of oil and gas export earnings in 2021.[3] 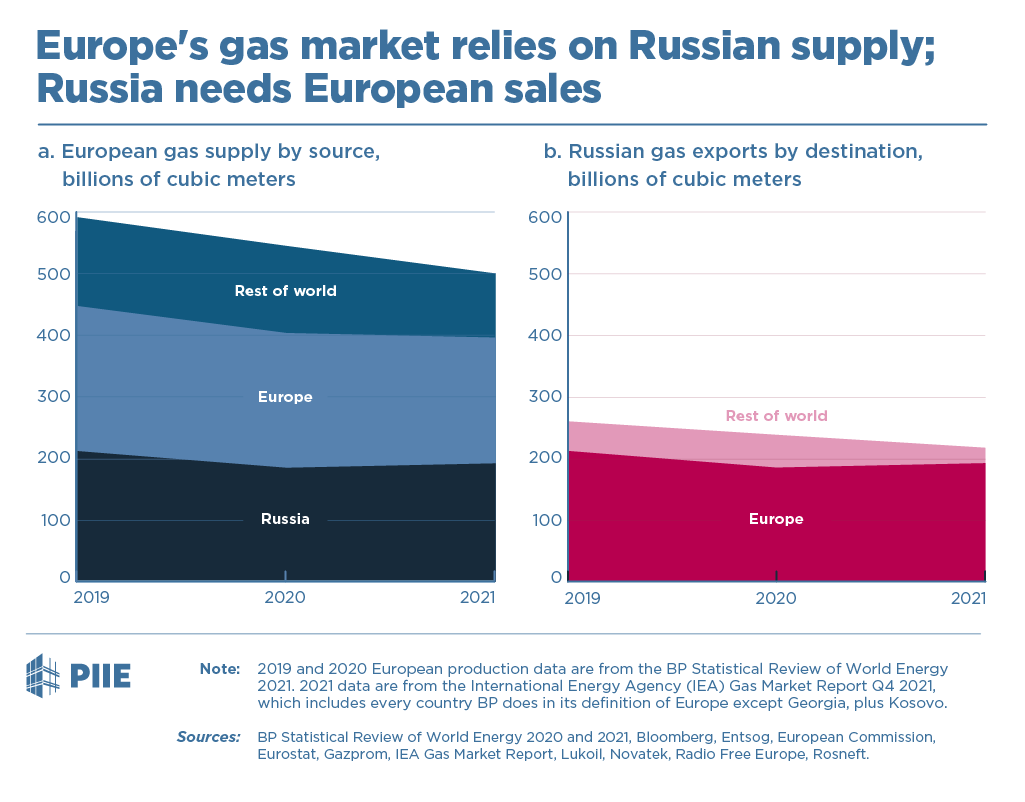 Dealing with dependency: What Europe can do

Europe's dependence on Russian gas imports could even increase over the near to medium term because of the decline in European gas production. Adding Nord Stream 2 would increase gas supplies and probably blunt price pressures, but the impact could be temporary if Russia backs out of its transit contracts through Ukraine when they expire in 2024. That is why European policymakers need to revisit other energy options for supplementing gas supplies and promoting green energy.

First, Europe must renew efforts to establish strategic gas stocks to supplement reserves held by gas operators. European gas reserves can hold about 120 BCM; in recent years, gas in storage has peaked close to 110 BCM, dropping substantially during the winter months. As gas imports and consumption rise, it makes sense to hold additional reserves that could be released in the event of supply disruptions. Additional inventory could come from a strategic gas reserve akin to the US Strategic Petroleum Reserve, which was developed to respond to power plays by Middle East oil producers in the 1970s. Europe also needs higher inventories mandated by regulations that require gas companies and pipeline operators to maintain minimum stock levels by the start of the next winter season. Such a step would require Gazprom to keep reserves in Europe that could be tapped by government edict if shortages arise.

Second, Europe should accelerate the development of low-carbon fuels. Europe's dependence on Russian gas as a share of European gas consumption will be less of a threat as Europe switches to new supplies of renewable energy, including those deploying new but politically controversial nuclear technologies. European countries should work to shorten the transition away from fossil fuels by providing incentives to produce renewable energy resources and boost energy efficiency in transportation, manufacturing, and residential buildings.

The situation in Ukraine underscores the urgency of acting for climate, energy security, and foreign policy reasons.

1. Data for Europe include inter alia Norway, Switzerland, Turkey, Ukraine, and the United Kingdom, as compiled by British Petroleum in Statistical Review of World Energy 2021.

2. The LNG market is highly competitive: Global LNG exports in 2020 mainly served Asian markets, which accounted for about two thirds of the nearly 500 BCM of total global shipments.

3. EU imports from Russia of products covered by HS 27; annualized total from data for January-August 2021.