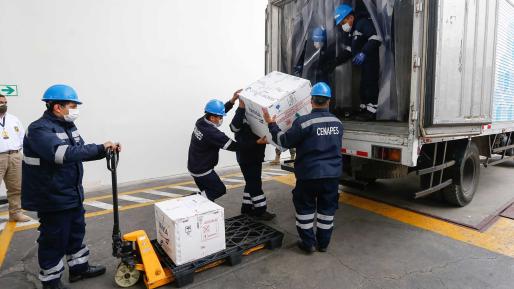 The Group of Seven (G7) countries’ recently announced target of donating 1 billion doses of COVID-19 vaccines to poor and middle-income countries was certainly welcome news. But if the doses are not matched by a buildup of infrastructure to administer them, accompanied by technical assistance to help poor countries mount mass immunization campaigns, the goal of taming SARS-CoV-2, the virus that causes COVID-19, will remain out of reach. A sweeping reform of the COVAX (short for COVID-19 Vaccines Global Access) vaccine distribution criteria is also needed. Health authorities should try to focus as much as possible on messenger RNA (mRNA) vaccines (e.g., Pfizer-BioNTech and Moderna), which offer superior protection against known viral variants compared with viral vector and inactivated virus vaccines (e.g., AstraZeneca and Johnson & Johnson’s Janssen, as well as the vaccines manufactured by Chinese pharmaceutical companies Sinopharm and Sinovac).

In recent weeks, President Joseph R. Biden Jr. has responded to pressure, globally and at home, to mount more of an effort to address the global pandemic now that vaccine distribution in the United States has reached an acceptable level, at least in some states. “We know America will never be fully safe until the pandemic that is raging globally is under control,” he said in May, making the case for help as self-interest as well as altruism. “No ocean is wide enough, no wall is high enough to keep us safe.” The US commitment was for 500 million doses to be distributed over the next year, and the other G7 leading industrial democracies (Canada, France, Germany, Italy, Japan, and the United Kingdom) committed to another 500 million at their summit in Cornwall in June. But many more steps are necessary if Biden’s declaration is to be fulfilled.

The Flaws in COVAX

The COVAX alliance was established in 2020 by the World Health Organization (WHO) and two other health alliances, Gavi and the Coalition for Epidemic Preparedness Innovations (CEPI). Its original objective was to provide 2 billion doses to poor and middle-income countries, with the goal of covering 20 percent of their populations. But as discussed here, its approach urgently needs adjustment. For example, the 20 percent threshold was thought to be sufficient to deliver vaccine doses to health care and essential workers as early as possible. To date, COVAX has delivered just over 80 million doses, falling well short of its stated goal.

Public health experts have pointed to the lack of funding to acquire doses as the main flaw affecting the COVAX facility. There are other flaws, however. Notably, the use of population shares as a criterion for vaccine allocation ignores different public health needs across the world. If G7 countries are to donate their doses via COVAX, there is no assurance under the prevailing criteria that doses will be directed to countries suffering disproportionately from the pandemic. To allocate doses equitably and efficiently, public health criteria must be dictated by need, not artificial metrics.

COVAX also needs mechanisms to provide resources and technical assistance to countries lacking capacity to mount mass vaccination campaigns. Because of this problem, vaccine doses that were close to their expiration dates have been thrown away in countries unable to distribute them.

Vaccines Are Not Made Equal

While rich countries have rolled out vaccines, scientists have been studying the effectiveness of different vaccines against variants of the virus. The outbreak of the Alpha variant (previously known as the B.1.1.7 variant that emerged in the UK) in Israel led to a comprehensive study of the effectiveness of the Pfizer-BioNtech vaccine. Preliminary studies on the effectiveness of Sinovac’s CoronaVac vaccine against the Gamma variant (previously known as the P.1 variant that emerged in Brazil), now widely disseminated in South America and responsible for the aggressive wave witnessed in recent months, have shown less promise. Studies have also shown that the Gamma and Beta variants (Beta was previously known as B.1.351, the variant that emerged in South Africa) have enhanced immune evasion capabilities, suggesting that some vaccines may be more effective than others against these variants.

The Delta variant that emerged in India (previously known as B.1.617.2) is spreading rapidly in the UK and other parts of the world. Scientists suspect that it is more transmissible than the Alpha variant and potentially more pathogenic, i.e., more capable of causing severe disease. Preliminary studies have shown that both the AstraZeneca and the Pfizer vaccines have reduced effectiveness against Delta after the first dose; while Pfizer’s effectiveness increases substantially after the second dose, AstraZeneca does not confer a similar level of protection for people fully immunized with its vaccine.

These findings pose challenges to G7 countries considering the donation of vaccine doses to poor and middle-income countries. Pandemic containment across the world requires vaccines capable of reducing the rate of infections and transmissions. Thus far, the only vaccines with those capabilities are the mRNA vaccines. Therefore, G7 countries should focus the bulk of their vaccine donations on doses produced by Pfizer-BioNTech and Moderna. To date, vaccine donations via COVAX are primarily AstraZeneca doses, according to data on the Gavi website.

A World of Increasing Divergence

Failure to mount global cooperation to address the problems outlined above will likely result in disparate recoveries and growing inequalities. As the managing director of the International Monetary Fund, Kristalina Georgieva, has recently said, vaccine policy is economic policy. Currently, the world lacks a well-structured process to vaccinate a sufficient share of the global population associated with pandemic containment. There is little recognition that it is not enough to supply doses of any of the available vaccines.

True, all vaccines protect against severe disease and greatly reduce the risk of death. But they all differ in their ability to reduce infections and the rate of transmission. Failure to differentiate among vaccines means that while the world may eventually move away from the pandemic, aggressive outbreaks of local epidemics will recur, some inevitably affecting the poorest regions of the world.

But it is not just the developing world that will be victimized. This failure may also affect countries with large pockets of unvaccinated people susceptible to the virus and its many variants. Ironically, one of the countries at greatest risk of suffering recurrent epidemics of SARS-CoV-2 is the United States, where vaccine hesitancy has prevented its citizens from reaching herd immunity thresholds ahead of the rest of the world.

How to accelerate vaccine innovations to counter future pandemics