Arms and influence? Chinese arms transfers to Africa in context

Critics of China’s global political and military ambitions sometimes assert that China has emerged as a major—and expanding—player in Africa’s arms and security technology market and that, unlike the United States and its allies, China is a provider to “rogue” regimes that flout international norms on human rights and democracy. Speaking in 2019, US vice president Mike Pence castigated the Chinese regime for exporting “the very same technological tools that it uses in its own authoritarian regime,” namely arms and surveillance technology.

Widely reported studies by Australia’s Lowy Institute and the Stockholm International Peace Research Institute (SIPRI) reinforce such views. These studies find that arms imports from China accounted for 17 percent of total African arms imports between 2013 and 2017, up 55 percent over the previous five-year period.

Analyzing two decades of SIPRI’s own data on arms transfers leads to different conclusions: China’s market position is comparatively small and has not expanded recently. While it has emerged as the arms supplier of choice for a handful of regimes, these regimes are minor players in terms of total arms transfers and—with a notable exception—hardly fit the model of a rogue regime.

US-China competition is playing out on various fronts, ranging from the ongoing trade war to naval tensions in the South China Sea. Africa has emerged as another front in what is widely viewed as a Cold War-esque pattern of competition for influence and economic ties with the continent’s emerging markets.

Arms sales and military aid are tried-and-true mechanisms by which governments can develop new strategic partnerships and reward and punish existing partners. Because arms are crucial to recipient governments’ abilities to defend their interests, they are a natural lever for influencing both the domestic and foreign policies of recipient governments. Thus, Chinese arms transfers are viewed as a mechanism by which the Chinese government exports influence across the African continent. Former supreme allied commander of the North Atlantic Treaty Organization (NATO) James Stavridis warned that China is “willing to make arms sales much easier than the U.S. tends to do, both in terms of favorable prices and willingness to provide key technologies.”

These important claims deserve serious scrutiny. If China is indeed developing a dominant (or at least rapidly expanding) market share in the African arms market, it would be a strong signal of increasing diplomatic clout and leverage—clout that is already substantial due to strong economic and diplomatic ties across the continent.

What Do the Data Say?

To assess these claims, I rely on the SIPRI database mentioned above, which has a couple of distinct advantages over data on arms sales. First, SIPRI’S preferred measure—the trend indicator value (TIV)—compares transfers on the basis of their contribution to recipient-state military capacity rather than the dollar amount of the transfer, so it is better able to value transfers like the Dragonera, a Spanish naval patrol vessel that was retrofitted and then sold to Mozambique for the symbolic price of 100 euros in 2011. Second, TIV captures sales, in-kind military aid, and aid tied to purchases of donor-country arms. Thus, it gives a more accurate picture of the total contribution to recipient-state military capacity.

One important caveat is in order: The SIPRI data do not include small arms and light weapons but rather focus on larger weapons systems (anti-aircraft weaponry, missiles), vehicles (tanks, ships, aircraft, etc.), sensors (radar and sonar systems), and the like. Small arms are harder to track and their provenance is less consequential, given robust secondary markets and wide licensing of designs for common weapons—for example, variants of the venerable Russian-designed AK-47 assault rifle have been produced in over 30 countries.

Analysis of SIPRI data reveals that, in contrast to the rhetoric, China is a significant but still relatively minor player in the African arms market. Between 2000 and 2018, China accounted for only 7.5 percent of arms transfers continentwide, putting it in fifth place behind Russia (34 percent), the United States (19 percent), Germany (17 percent), and France (9 percent); see figure 1.[1] Moreover, and contrary to conventional wisdom,[2] this share has not increased materially in recent years: Between 2014 and 2018,[3] China’s share remained 7.5 percent. The emphasis on growth in Chinese arms exports to Africa overshadows a more general increase in arms transfers to the continent from all arms exporters. China may be making absolute gains in African markets, but so far relative gains in terms of market share have not materialized. 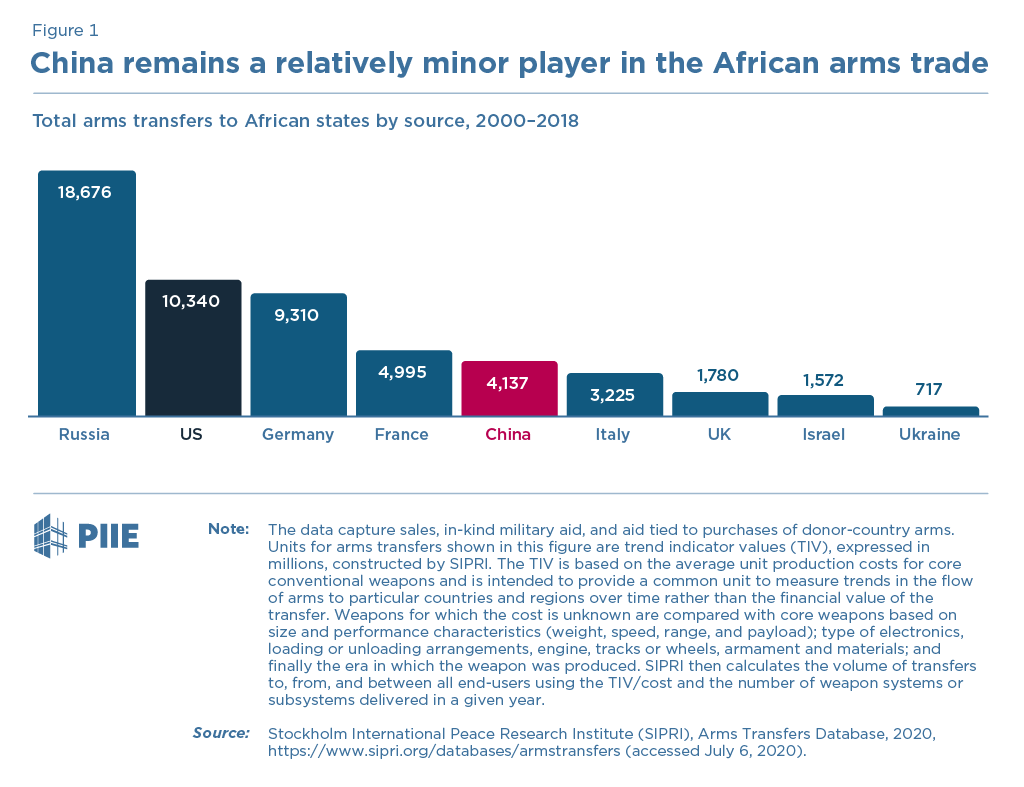 The more hyperbolic statements of China’s growing market share all have an important but largely unreported caveat: They pertain only to Sub-Saharan Africa, rather than the whole continent. With a few exceptions, the major arms markets on the continent are in North Africa: Egypt, Algeria, and Morocco accounted for 57 percent of transfers in the past two decades, and Sub-Saharan African countries received just 25 percent of total arms transfers during the most recent period (2014–18).

These trends are also born out in global data reported by SIPRI: From 2000 to 2019, Chinese arms transfers have averaged 4.1 percent of global arms transfers per year, lagging far behind the United States (32.2 percent), Russia (24.4 percent), France (7.2 percent), and Germany (7.0 percent); see figure 2. The larger market share for China in Africa versus the global market could be driven by strategic machinations but may also have more picayune causes. The arms industries of the United States, Germany, and France mirror those countries’ more general comparative advantages in highly capital- and technology-intensive goods, with emphasis on leading edge technology resulting in high per-unit costs (Brauer 2007). This is true to a certain extent for Russia as well, which sought to maintain peer competitor status with its wealthier rivals in the West (Cooper 2016). Chinese arms manufacturers continue to lag behind their Western counterparts in terms of technology and focused on serviceable but more cost-competitive products that appeal to the less developed and middle-income economies that predominate in Africa (Bitzinger 2016). 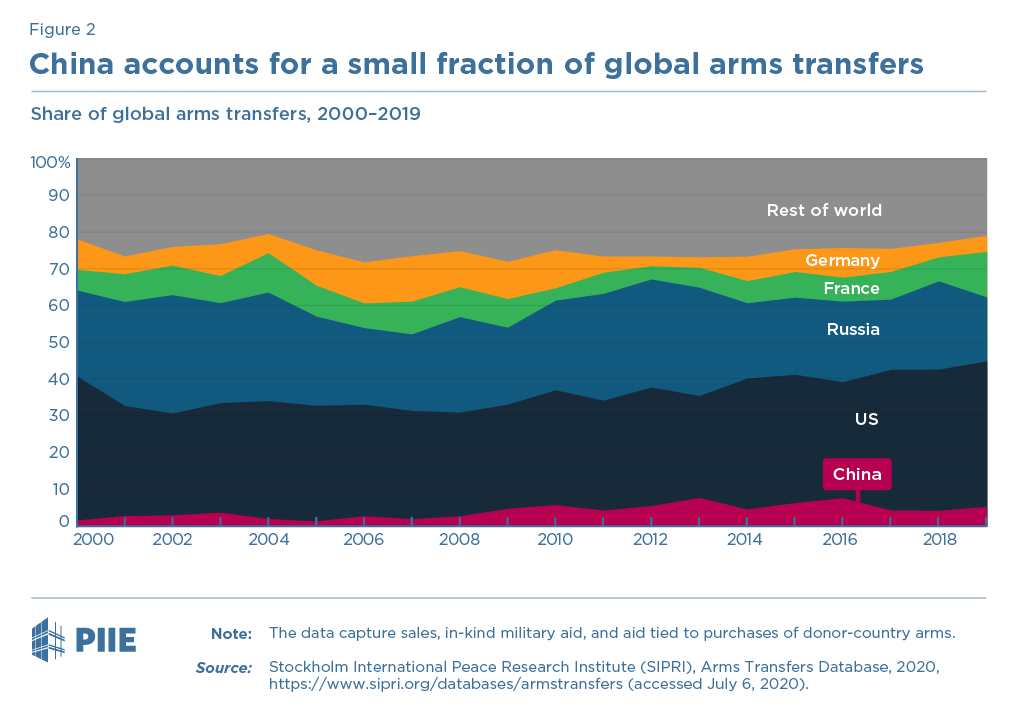 China has become the exporter of choice for a small number of African regimes. Between 2000 and 2018, Zimbabwe, Mozambique, Namibia, the Seychelles, Tanzania, and Zambia all received more than 90 percent of their arms transfers from China; three additional countries (Burundi, Ghana, and Kenya) received more than 50 percent. But these transfers account for just 2.5 percent of the total African arms market. With respect to Zimbabwe, China appears to be living up to its “rogue aid” reputation as partner of last resort for a pariah regime. However, the rest of the list hardly reads like a “who’s who” of international norm flouters: Ghana, Namibia, and the Seychelles are among the continent’s most stable democracies. More in-depth analyses of arms transfers to Africa find little support for the rogue aid hypothesis, with some evidence suggesting that US, rather than Chinese, arms transfers flow disproportionately to nondemocratic countries and countries with poor human rights records.

China’s rapid, outward-oriented economic growth has both facilitated and necessitated a large increase in its military spending. As China’s global economic ties deepen, its national interests increasingly require the ability to project force beyond Asia. Its extensive economic ties with Africa have indeed led to increasing Chinese presence in the Indian Ocean off the African coast, interest in facilitating trainings on the continent, and the opening of its first African base in Djibouti. However, the case for China’s arms transfers ramping up across the entire continent is, in the main, overblown.

2. The conventional wisdom is four-pronged: (1) Chinese arms transfers have increased significantly, especially in Africa; (2) Chinese arms are helping fuel conflict and human rights abuses; (3) arms flows are motivated by Chinese national interests, in particular the pursuit of natural resources; and  (4) these flows are different from those from other major arms exporters (see Hendrix and Noland 2014).