The following charts compare UK trade, FDI inflows, and immigration growth before and after Brexit and show the effects of EU withdrawal on the UK economy. 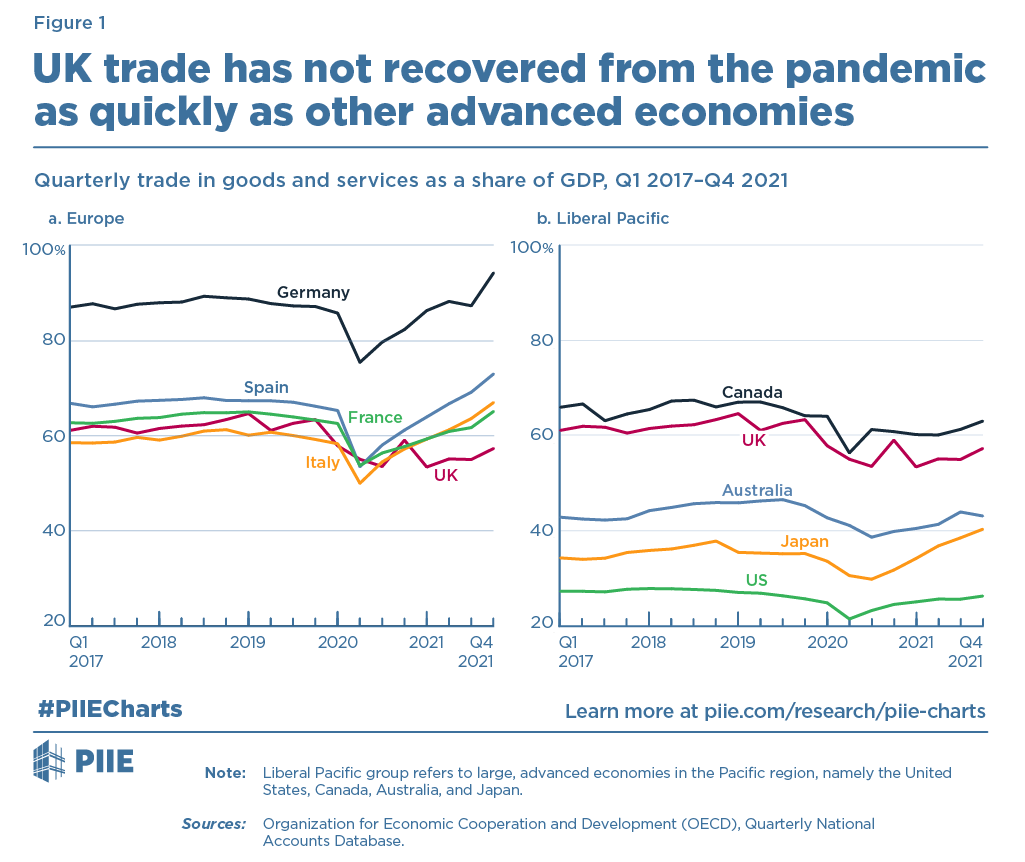 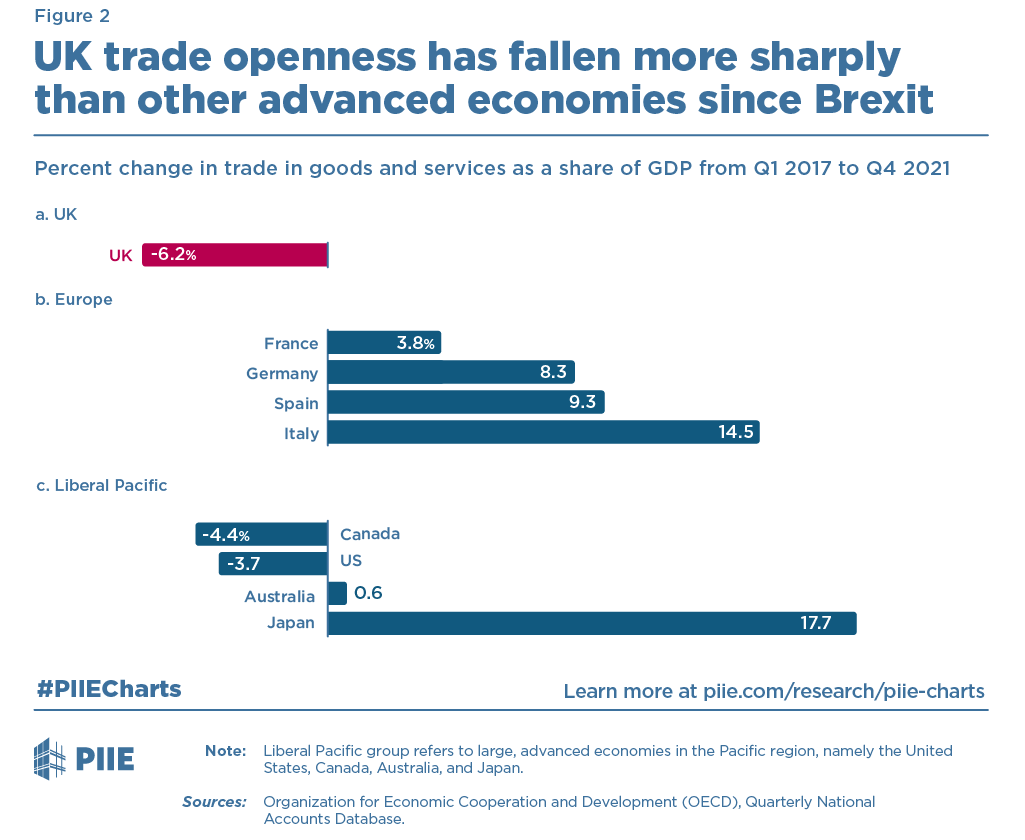 UK trade is recovering from the shock of the pandemic much more slowly than its peers in Europe and the Pacific region (figure 1). The large European economies recovered quickly; trade as a share of GDP had surpassed pre-pandemic levels by Q4 2021 for every EU country in the sample. Trade in the large advanced economies in the Asia-Pacific—the liberal Pacific—has also largely recovered. Meanwhile, UK trade as a share of GDP still trails its pre-pandemic level and is more than 6 percent below its Q1 2017 level (figure 2). 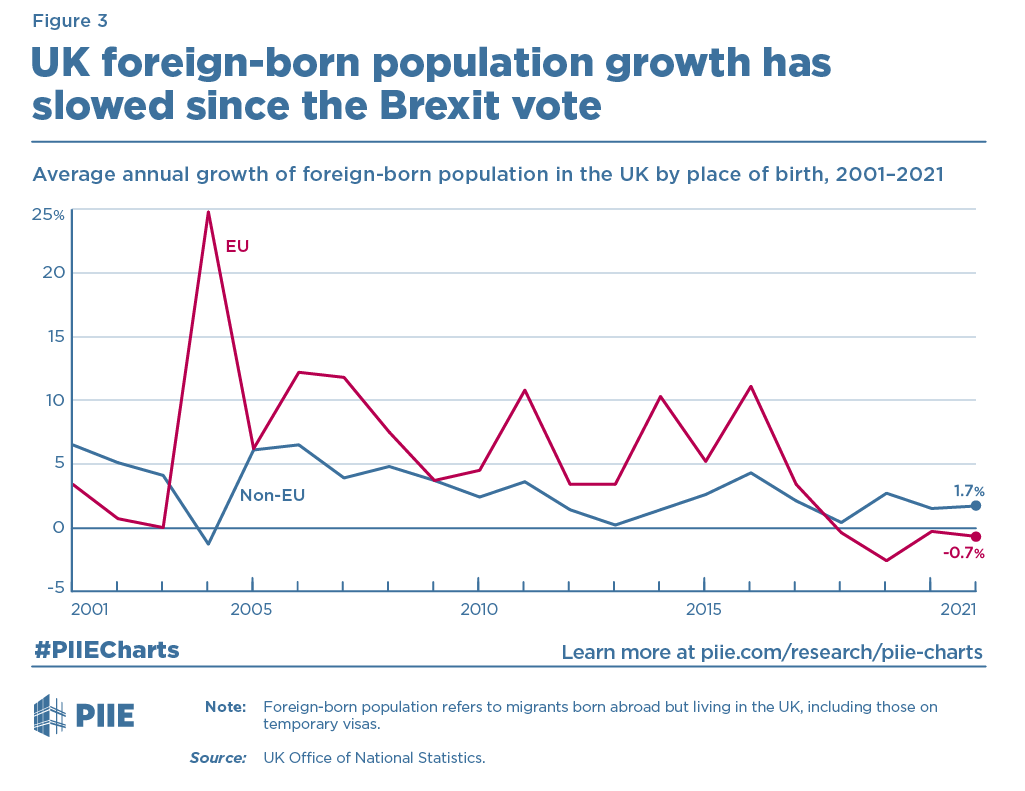 In the early 2000s, Britain was attracting and retaining a steady flow of foreign-born migrants. But after 2018, EU immigration tailed off, and the number of EU-born residents leaving the UK each year has outnumbered new arrivals (figure 3). There has not been a compensatory increase in non-EU immigration, which has reduced the size and diversity of the UK labor pool and could have implications for fiscal sustainability. 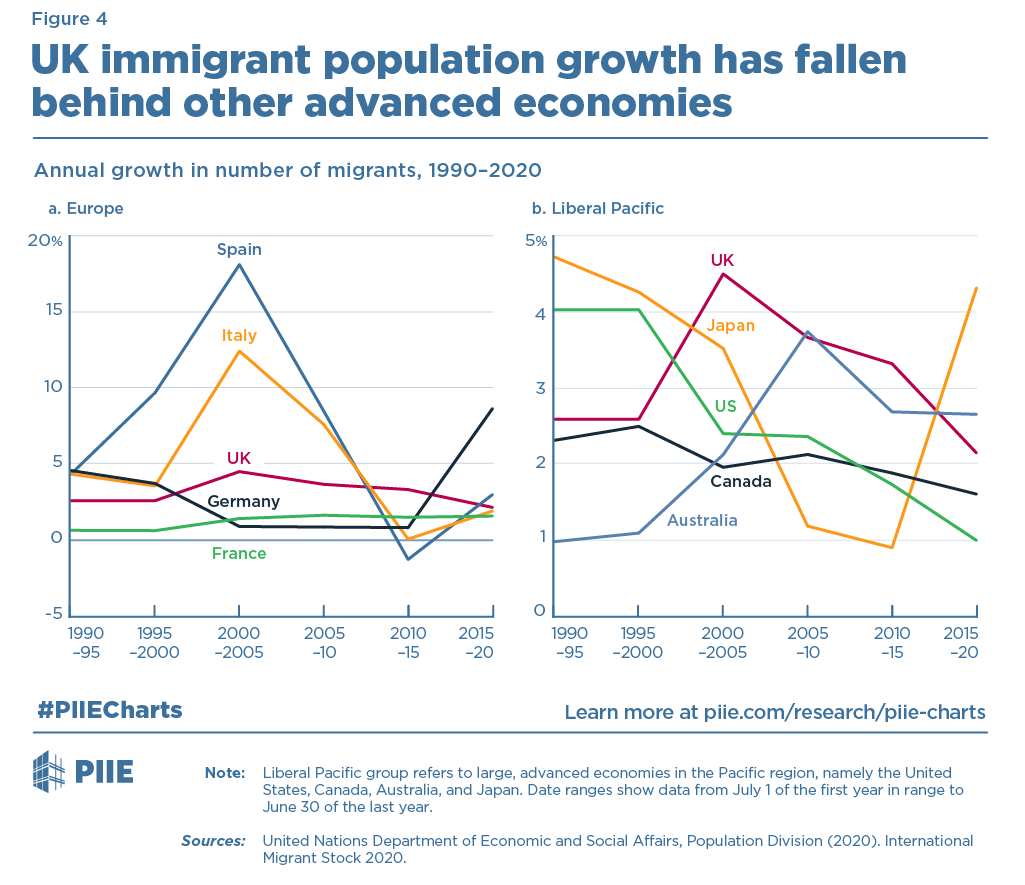 The UK is no longer one of the most open economies to immigrants among its peers (figure 4). From 2015 through 2020, the UK was the only economy among the large EU economies that reported a slowdown in its immigrant population growth from the previous five-year period. Its recent trajectory has mirrored the United States', which has been disengaging from the global economy. 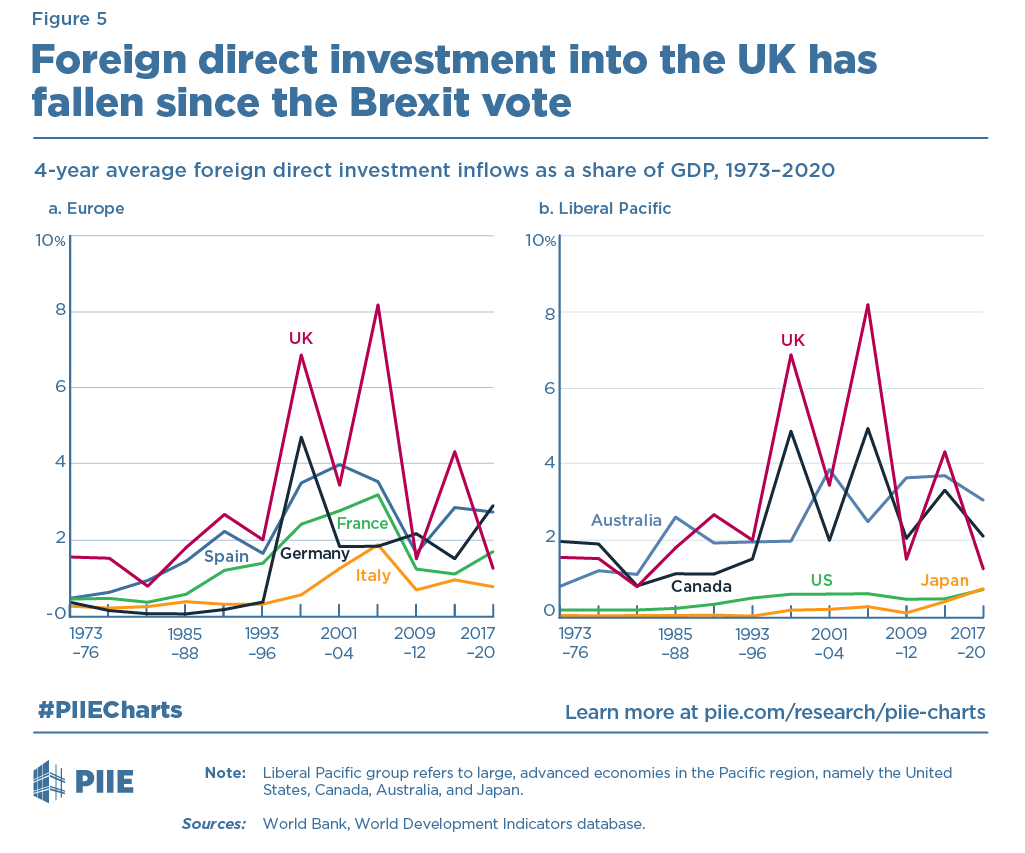 The UK has consistently attracted more foreign investment than other comparable economies since the 1970s, driving higher wage growth, more innovation and technological advancement, and greater knowledge and skill sharing. But FDI has retreated since the Brexit referendum, and the UK is no longer a leader among its peers. Between 2017 and 2020, average UK FDI inflows as a share of GDP plummeted to its lowest level since the 1980s (figure 5). 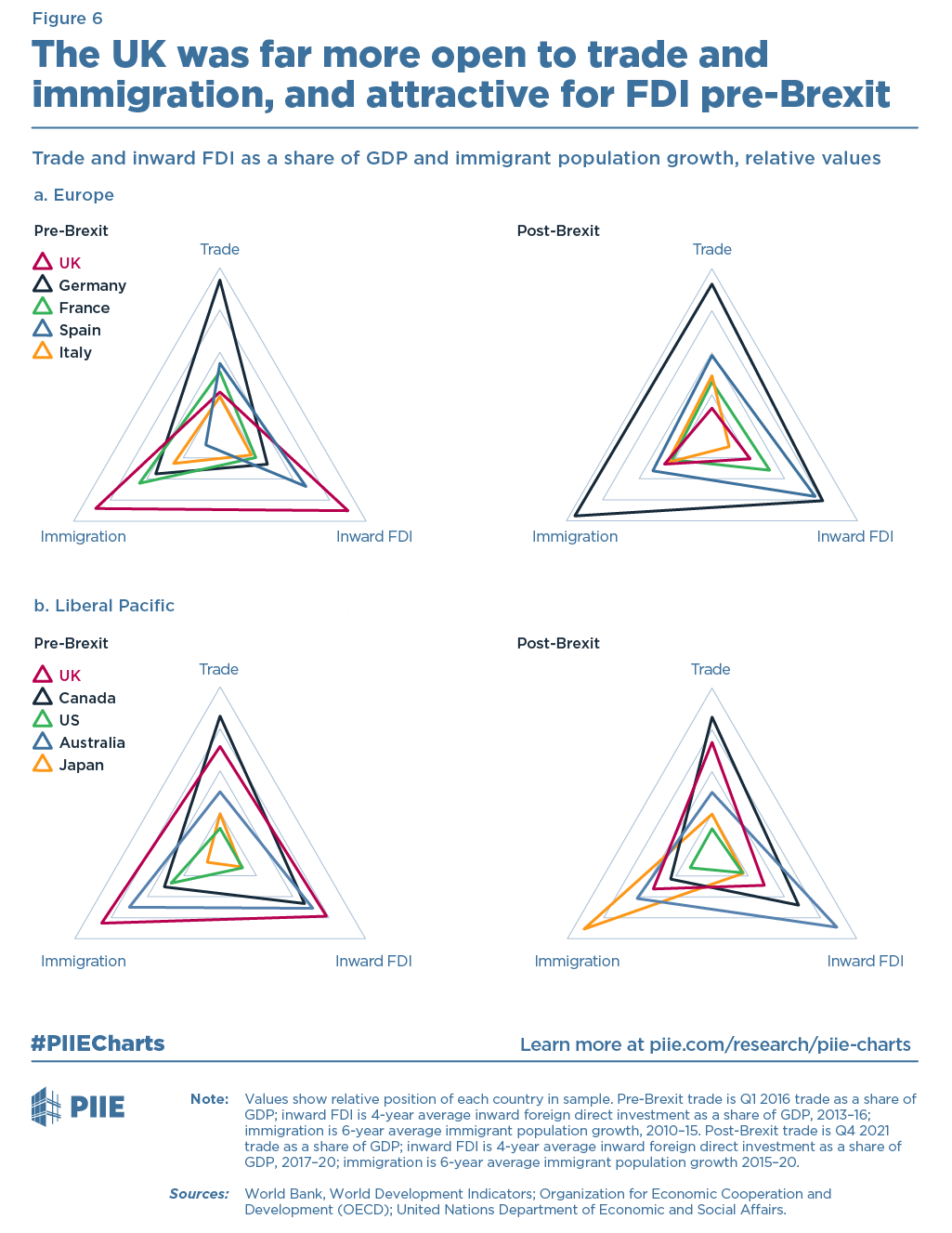 Before Brexit, the UK was the most open to immigration and FDI of the advanced economies in the sample, with a comparable volume of trade as a share of GDP. After Brexit, the UK is the least open to trade among the EU economies, and at the lower end of the sample for FDI and immigration. Compared to the liberal Pacific economies, UK post-Brexit trade holds up better, but it is no longer a leader in inward FDI and immigration growth (figures 6 and 7). 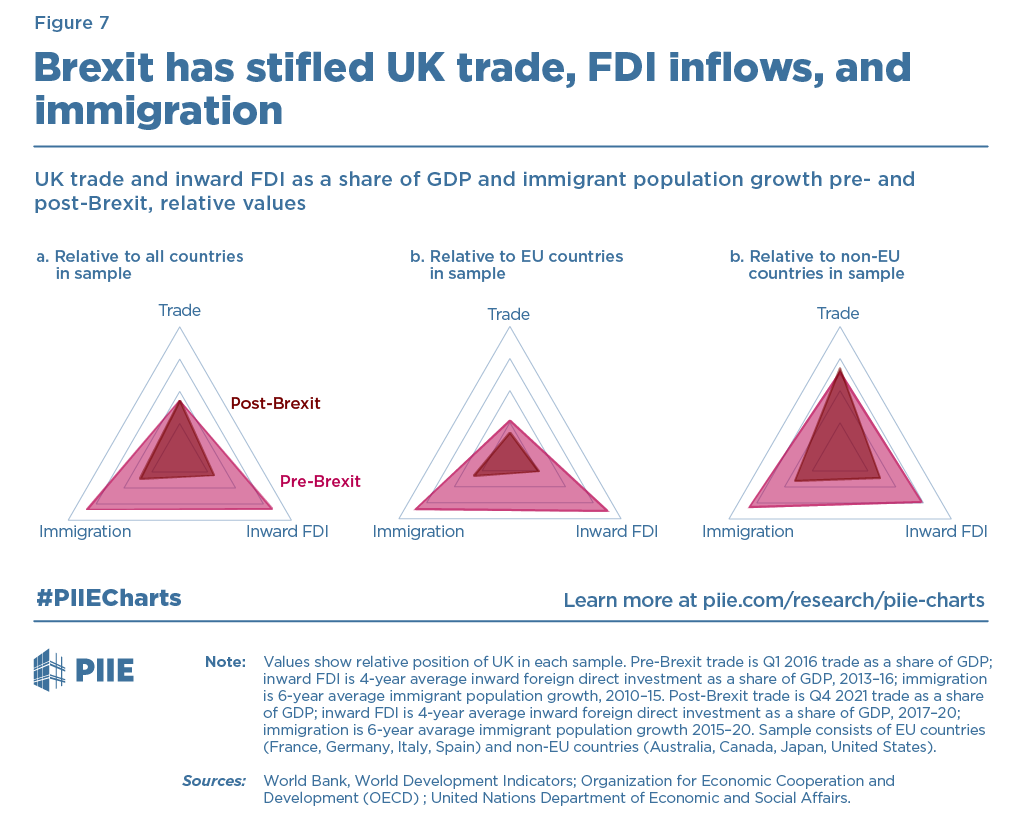 The effects of this shrinkage in trade, FDI, and immigration still remain to be seen and will depend on the UK government’s response. But it could do lasting damage to the UK economy. Reduced trade openness can limit competition for domestic firms, hindering innovation. A less diverse workforce and lower FDI levels can also hamper productivity growth. The UK is a smaller player in the global economy than it was pre-Brexit, and it must adapt to avoid the worst economic consequences.

These charts and text were adapted from Adam S. Posen's presentation at The Economics of Brexit: What have we learned conference 2022, hosted by UK in a Changing Europe. Watch the full presentation here.