The Cost of Trump’s Economic Nationalism: A Loss of Foreign Investment in the United States

Beyond the cost of President Trump’s trade war with longtime US friends and rivals, his policy of economic nationalism has taken a toll in another important sphere: Net inward investment into the United States by multinational corporations—both foreign and American—has fallen almost to zero. As I pointed out in a posting in Foreign Affairs this month, this shift of corporate investment away from the United States will decrease long-term US income growth, reduce the number of well-paid jobs available, and accelerate the shift of global commerce away from the United States.

A few months ago, I developed in Foreign Affairs the potential emergence of a post-American world economy resulting from Trump’s aggressive bilateral bullying and abandonment of the rules-based international economic order. Today this post-American economic world, one where all investment is more uncertain and politicized—because the US government acts toward businesses as any self-enriching autocracy would—is increasingly on its way. That is apparent in business decisions about large, long-term investments, such as the building of major production facilities; foreign takeovers of, and mergers with, US companies; and investment in research facilities and workers.

The falloff is a result of a general decline in the United States’ attractiveness as a place to make long-term business commitments. The overall trend in FDI shows the same picture. A four-quarter moving average of net FDI inflows to the United States shows that this year, it has fallen back to its postcrisis lows of 2012 (see chart). 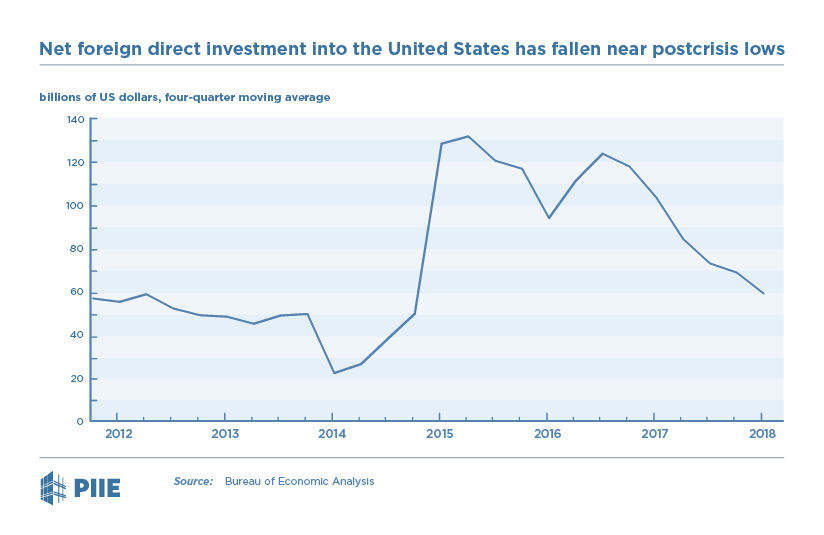 The situation is even worse than this picture shows.  The massive fiscal stimulus passed by Congress should have boosted investment incentives by cutting the corporate tax rate and making the tax code more favorable to production, thereby increasing US growth prospects. Chinese and other companies worried about future access to the US market should be deciding to get as many deals done as possible before Congress shortly passes the Foreign Investment Risk Review Modernization Act, which will toughen inward investment rules—as well as to get behind looming tariff walls. Yet despite all these positive pressures, net inward FDI fell.

A shortfall in domestic investment by US companies given these factors also indicates that they are making the same assessment as their foreign counterparts, only with a little lag. If investment outside the United States by US multinationals increases over the rest of this year, despite lower US tax rates and higher US economic growth relative to the rest of the world—and in the face of the formal and informal disincentives the Trump administration is putting on outward investment—that would be revealing.

In sum, net direct investment into the United States, flows of FDI both in and out, is therefore worth watching as an early indicator of how far the global economy has moved toward a post-American era. The signs suggest that Trump’s hostile approach to globalization is getting the world there faster than many realize.