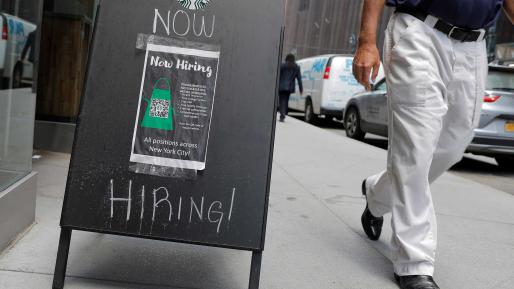 The September employment report signaled that the US labor market is cooler than it was earlier this year, consistent with the view that monetary policymakers have slowed the economy somewhat as they try to tame inflation. Nonfarm payrolls increased by 263,000, roughly in line with expectations for a rise of 250,000 (figure 1). On average, payrolls have risen by 372,000 over the past three months, materially below the average gain of 444,000 in the first half of 2022. The three-month change in average hourly earnings, at 4.4 percent in September (adjusted for the changes in the composition of employment across industry sectors), has not declined appreciably since the spring, but it is down from the 6 percent pace seen in late 2021.

The news suggests the labor market is, on the whole, moving in the direction needed for inflation to fall—but only slowly, and considerably further progress along these lines will be needed to bring price inflation back to the Fed's target of 2 percent. Wage growth is still well above pre-pandemic norms, the unemployment rate (at 3.5 percent in September) is extremely low, and job openings remain high. With no direct evidence as yet that underlying price inflation has appreciably stepped down from the high levels reached earlier this year, Federal Reserve plans to tighten further should not change based on today's report. 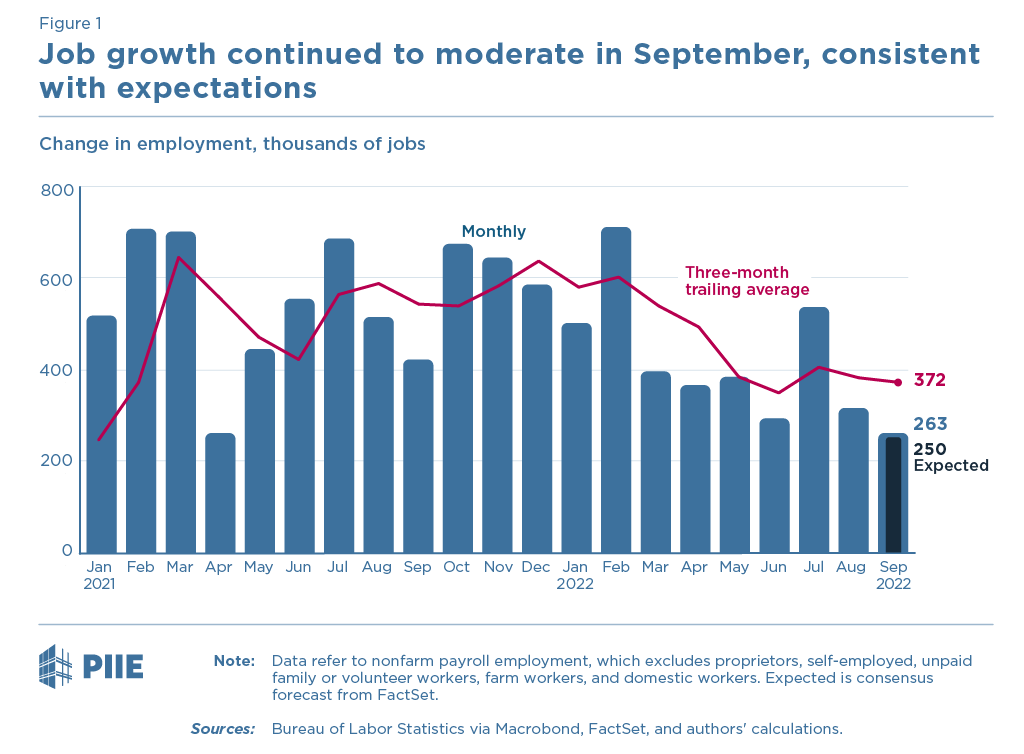 Payroll growth has moderated in many sectors

Across most industry sectors, the average (annualized) pace of payroll growth over the last three months is lower than on a twelve-month basis, as can be seen in figure 2. There have been particularly marked slowdowns in employment growth in the leisure and hospitality sector, mining and logging sector, and the transportation and warehousing sector. Given no evidence that worker shortages are becoming more acute in most sectors (with anecdotes suggesting some exceptions, including teaching and health care), the slowing in payroll growth in many sectors suggests some easing of overall labor demand. 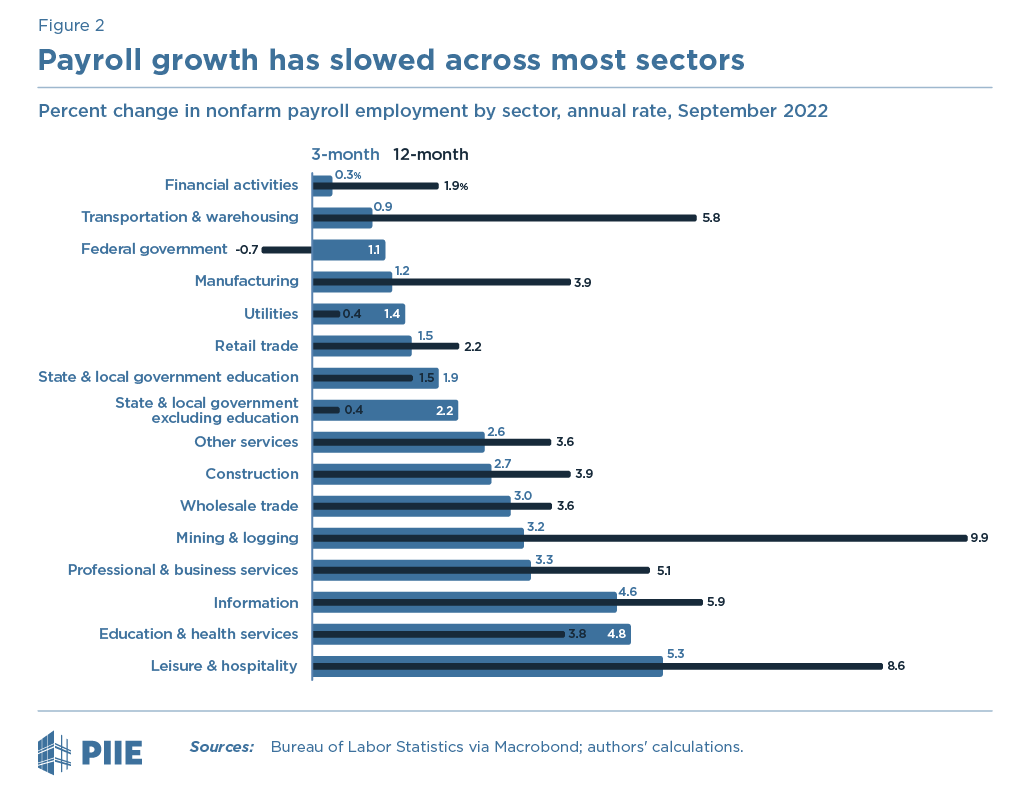 Most other measures of labor market slack suggest that the labor market is also very tight. While the quits rate, the job openings rate, and job openings per unemployed worker have all receded in recent months, their current levels are well above their pre-pandemic ranges (figure 4).

As shown in figure 5, three-month growth in nominal average hourly earnings adjusted for industry-level composition changes is lower than it was in late 2021. However, the step-down occurred in early 2022; the pace of wage growth has been moving roughly sideways since then. As noted in Furman and Powell's summary of the August employment report, this pace of wage growth is consistent with a core PCE inflation rate of around 4 percent. Moreover, other measures of wage growth such as the Atlanta Fed Wage Tracker and the Employment Cost Index (ECI) have shown continued rapid wage growth. The ECI is considered the most accurate measure of wages but the latest available data is for June 2022; policymakers are sure to be looking carefully at the upcoming September ECI release, which is scheduled for October 28th. 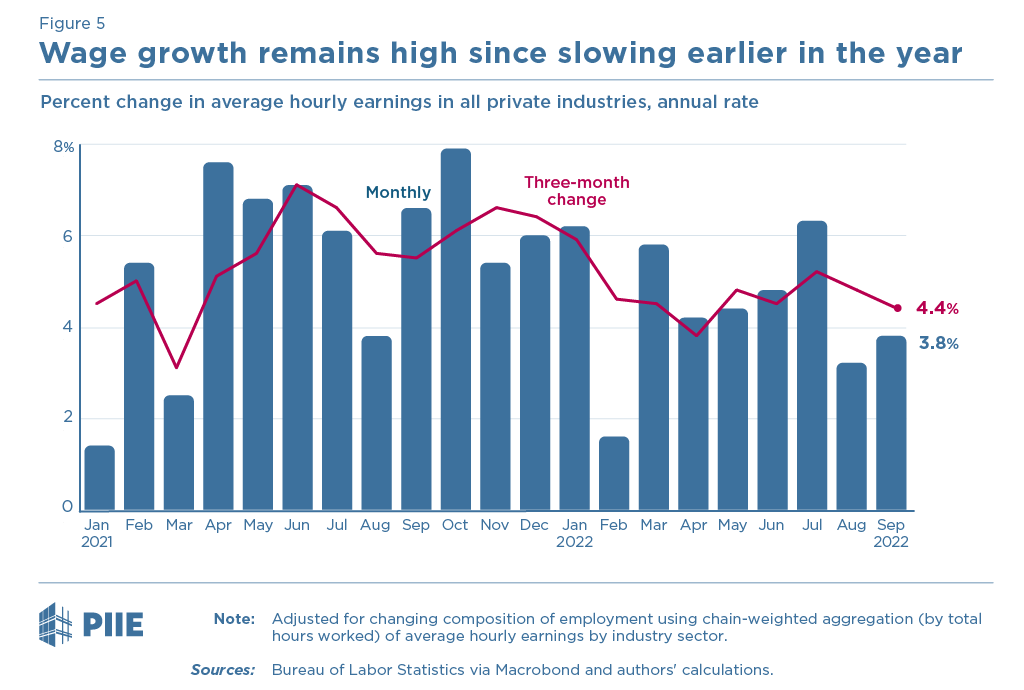 Moreover, cross-sector analysis suggests that wage growth may be more influenced by factors beyond labor demand than it was earlier in this recovery. Comparison of the two panels of figure 6 shows that a given difference in the job opening rate is now associated with a smaller increase in wage growth than it was six months ago (with the panels based on twelve-month changes in wages and twelve-month averages of job openings). One explanation for this pattern is that recent wage dynamics are being shaped not only by supply and demand in individual sectors but also by a general need to "keep up" with broader inflation—which raises the risk that faster wage growth will become embedded.

Strong labor demand tends to draw people into the labor force, and, indeed, the prime-age labor force participation has risen 1.1 percentage points over the past year (figure 7, panel a). Without this increase in labor supply, labor markets would have been even tighter.

The scope for further increase in labor supply is unclear, however. The prime-age labor force participation rate already exceeds its average in 2019—which was considered to be a robust period for the labor market—and is only a few tenths below its pre-pandemic high point. The labor supply of older workers is still depressed relative to its pre-pandemic range (figure 7, panel b), but a significant recovery seems unlikely. Recent research, along with the fact that the participation rate of this group has barely budged over the past year, suggests that the group may not be very sensitive to the strength of labor demand. It is also worth noting that the participation rate for older workers, unlike that for prime-age workers, did not move up much when labor markets were very strong prior to the pandemic. In addition, other potential explanations for the persistent decline in labor supply among older workers—aging within the older group, COVID-related concerns and disabilities, less pleasant working conditions in some high-contact service jobs, and early retirements spurred by buyouts and wealth gains during the pandemic—may be associated with more permanent decisions to not work.

Long-term inflation expectations appear well-contained, and core goods price inflation is falling. But inflation in core services may not have peaked yet, wage growth remains well above the level consistent with 2 percent price inflation, and the labor market is still tight. With underlying PCE price inflation standing at about 5 percent, the Federal Reserve will continue to tighten monetary policy. The fallout will include reduced employment growth in the months ahead and, at some point, slower wage growth.