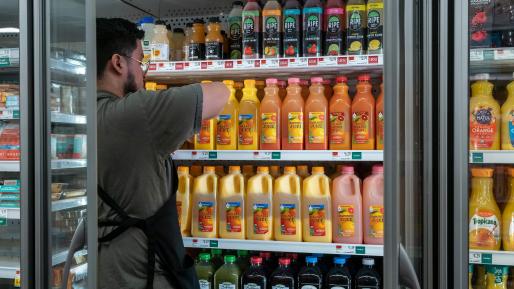 No sign of inflation relief in July US jobs report

The July 2022 US employment report surprised to the upside and depicts a labor market that is still very tight. Nonfarm payrolls rose 528,000, more than double the consensus forecast. The unemployment rate ticked down to 3.5 percent, matching the low seen in the robust pre-pandemic labor market. Average hourly earnings rose by 5.2 percent over the 12 months ending in July. Over the past 3 months—and adjusted for compositional shifts in the pool of workers—earnings also rose at an annual rate of 5.2 percent, up from 4.5 percent last month. These wage readings are well above what would be consistent with the Fed’s target of 2 percent inflation.

The continued strength of the US labor market stands in contrast to other indicators of economic activity in the United States, which have slowed. The rebound in employment following the pandemic trough had lagged the rebound in output over the first year of the recovery, and ongoing strong increases in employment despite the slowing of production probably reflect some catch-up. With demand for goods and services growing only tepidly, employment growth is likely to ease in coming months, reducing wage pressures. But the longer that wage growth remains high, the greater the upward pressure on prices and the more likely that inflation expectations will rise, making the challenge of returning inflation to the Fed’s target even more daunting.

As can be seen in figure 1, nonfarm payroll employment growth was robust in July, with the economy adding more than twice as many jobs as forecasters expected. The July gain pushed up the three-month average change in nonfarm payrolls to 437,000, reversing the decline over the preceding several months. Although employment growth remains lower than it was last year, the current pace is much higher than the pre-pandemic norm.

While payroll employment growth has remained strong, other monthly indicators suggest that the economy is slowing, as shown in figure 2. Employment as captured by the Bureau of Labor Statistics survey of households has leveled off in recent months. (Although this survey is more noisy on a monthly basis than the payroll survey, the weakening has been evident for long enough that some signal should be taken from it.) Real consumer spending and industrial production have been moving sideways since the spring. Slowing output and demand for goods and services is not surprising given the various headwinds this year—including tighter financial conditions, the erosion of consumer purchasing power by high inflation, and much less fiscal support.

The United States is not in a recession yet

While the declines in US real GDP in the first half of 2022 have received a great deal of attention, the robust labor market conditions through July are not consistent with the view that the US economy is currently in a recession. In addition to continuing payroll growth, job openings remain about 50 percent higher than their pre-pandemic levels. Moreover, at 3.5 percent, the US unemployment rate is tied with its 50-year low, as can be seen in figure 3.

Many analysts expected some moderation of wage growth in July, but that did not occur. The twelve-month change in composition-adjusted average hourly earnings, a series that partially abstracts from compositional shifts in the pool of workers, was unchanged in July at 5.2 percent (figure 4). The three-month annualized change in this series rose last month, returning to 5.2 percent. While this series is well below its peak last year, it is still 2.4 percentage points above the average for the five years preceding the pandemic.

Last week’s report on the employment cost index (ECI) also showed that wage growth remains high (figure 5). While less timely than average hourly earnings (with the latest data going through June), the ECI is not influenced by compositional shifts in the pool of workers and therefore is viewed as the most accurate measure of underlying wages. The ECI for private wages and salaries excluding incentive-paid occupations rose at an annual rate of 5.4 percent over the three months ending in June. This series is off its recent peak by just 0.5 percentage point and is well above its pace before the pandemic.

Average hourly earnings are not showing a consistent pattern across sectors (figure 6). Earnings have risen the most over the past year in leisure and hospitality, and no slowing in earnings growth can be seen, consistent with ongoing worker shortages in that sector. Earnings growth has picked up in the past 3 months to very brisk rates in financial activities, other services, and mining and logging. But earnings growth has slowed in manufacturing, wholesale trade, transportation and warehousing, and professional and business services.

More slack in labor markets will be needed to relieve wage pressures, and labor supply increases are unlikely to drive that change

Sizable wage gains are good for workers, particularly when consumer prices are rising rapidly, but they also put pressure on firms to raise the prices of goods and services they sell. Economic analysis tells us that breaking the cycle of rising wages and prices will require more “slack” in labor markets: Labor demand will need to fall relative to labor supply. But the scope for a big increase in labor supply is limited at this point, so the required increase in slack will need to come mostly from reduced demand.

The labor force participation rate of older workers has not recovered at all during the past two years and remains well below its pre-pandemic mark. Within this group of workers, the average age is rising, and therefore we should expect the participation rate to fall---with rough calculations suggesting a decline of about 0.7 percentage point per year based on aging alone. Therefore, the shortfall relative to participation before the pandemic is unlikely to be unwound.

The Federal Reserve will be concerned by the lack of evidence of cooling in the labor market, and, in particular, by ongoing rapid wage increases. Although strong wage growth benefits workers in the short run, the current pace is not consistent with low inflation and moderate trend growth in productivity and therefore cannot be sustained over time.

Moreover, recent data has not shown any lessening of core consumer price inflation, with PCE prices apart from food and energy rising 5.2 percent at an annual rate during the three months ending in June, compared with 4.8 percent over the past year as a whole. The longer that inflation remains elevated, the greater the risk that inflation expectations rise further, which would make high inflation more entrenched. The Fed should continue to increase interest rates until there are definitive signs that inflation is turning down.