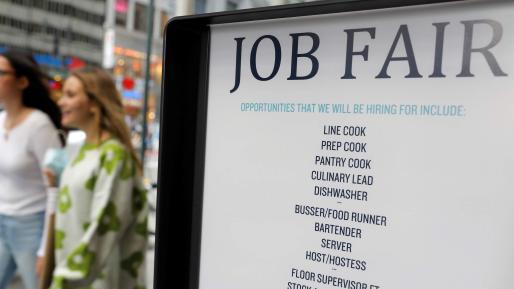 The US labor market has been very tight for over a year now, driving up both nominal wage growth and price growth, and it remained tight in August. Job growth continued to be strong as employers added 315,000 jobs last month. While the unemployment rate increased to 3.7 percent, this was accompanied by a substantial improvement in labor force participation, so the employment rate, the share of the population that was working, increased as well. Both the payroll and household surveys showed similarly strong employment increases last month. Hours and wage growth showed some signs of cooling in August, with average weekly hours falling and wage growth slowing to a 3.2 percent annual rate (once adjusted for industry-level composition effects). Wage growth over the past three months, however, remained strong at 4.7 percent. This pace of wage growth is consistent with an underlying core PCE inflation rate of around 4 percent, well above the Federal Reserve’s target.

The Pace of Employment Growth Stays Strong While Employment Is Rising

The economy added 315,000 jobs in August, consistent with analysts’ expectations (figure 1). Job growth has slowed from its extremely fast pace in the second half of 2021 but remains very strong relative to more normal periods. At an average of 378,000 jobs over the past three months, recent job growth has been much faster than the approximately 50,000 jobs pace needed to maintain August’s age-adjusted employment-to-population ratio or than the 198,000 jobs per month added in the year before the pandemic. 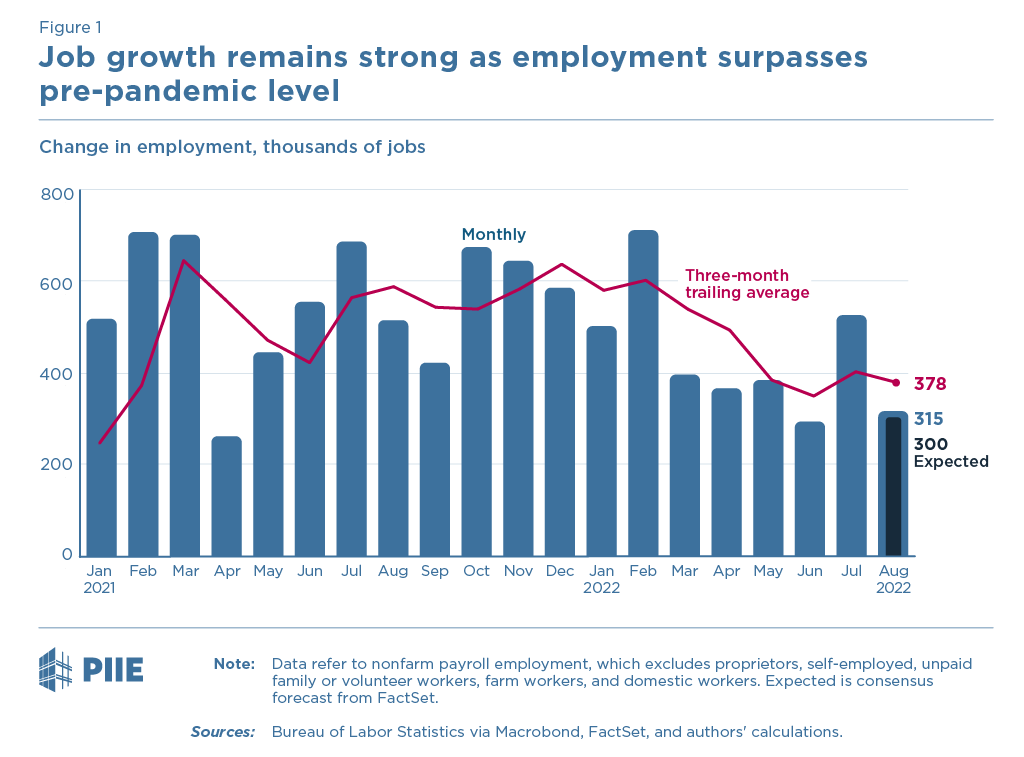 With these additional jobs, payroll employment is now higher than it was in February 2020. The economy had been expected to continue to add jobs throughout 2021 and 2022, so the economy is likely still missing jobs relative to where it would have been absent the pandemic. Relative to the Congressional Budget Office’s January 2020 projection (adjusted for slower than expected population growth), there were 1.1 million fewer jobs in August than were expected.
Unemployment increased to 3.7 percent in August (figure 2a), but continues to be very low, just pre-pandemic level. While the unemployment rate increased in August, the employment rate increased as well as the labor force participation rate increased 0.3 percentage point. With the increase in labor force participation, the employment rate for people aged 25-54 closed some of the remaining gap and is now 0.2 percentage point below its pre-pandemic level (figure 2b).

While the labor force participation rate recovered throughout 2021, that recovery seemingly stalled in the first half of the year. Whether the improvement in August will continue in the coming months will be an important factor in whether the labor market will continue to normalize.

Of the 0.6 percentage point decline in the labor force participation rate not associated with the changing demographic structure of the workforce, the majority of the decline has come from men. Around half of the overall decline has come from reduced participation among men ages 55 and older. Women ages 25-54 have actually seen their labor force participation increase (adjusted for within group aging) since the beginning of the pandemic but declines among men have reduced participation for the age group as a whole (Note the breakdown of contributions can reflect volatile monthly data. For example, the relative contributions of women and men were similar, or even reversed, earlier in the year.)

The labor market continues to show signs of substantial tightness, but several indicators suggest that it may not be getting much tighter. In recent months, both the unemployment rate and employment rate for people ages 25-54 have been little changed while the quits rate has fallen from its high in November 2021. Openings-based measures did become somewhat tighter in July, but likely loosened in August and they remain below their recent highs. Overall, in July there were 2.0 job openings for every unemployed person. Based on job postings data from Indeed, it is likely that number fell to 1.8 in August (official openings data are not available for August).

The prime-age (25-54) employment rate remains slightly below its level in February 2020, as shown in figure 4. After increasing in August, the unemployment rate is now slightly above its pre-pandemic low. However, if the natural rate of unemployment has risen since the pandemic, similarly low levels of unemployment could indicate a meaningfully tighter labor market now.

Despite falling somewhat in recent months, the quits rate (for July, the most recent month available) is still much tighter than anything on record. And the high level of job openings suggests that labor markets are even tighter.

Nominal average hourly earnings adjusted for industry-level composition changes grew 3.2 percent at an annual rate in August. It is possible that this represents a cooling off of wage growth, but it could just represent a temporary slowdown. The change over the last three months, 4.7 percent at an annual rate, is similar to the pace earlier in the year. While this level of nominal wage growth is much lower than the 6.0 percent annual rate in the second half of 2021, it is still faster than normal. In the two years before the pandemic, this wage measure grew at a 3.1 percent annual rate. This measure of wages is consistent with a core PCE inflation rate of around 4 percent. Earnings for production and nonsupervisory workers rose somewhat faster than those of all workers at a 3.9 percent annual rate in August and a 5.3 percent annual rate over the past three months (also adjusted for industry-level composition changes). Other measures of wage growth, including the Employment Cost Index and the Atlanta Fed Wage Tracker, also show a continued rapid pace of wage growth that is also consistent with substantially elevated inflation. 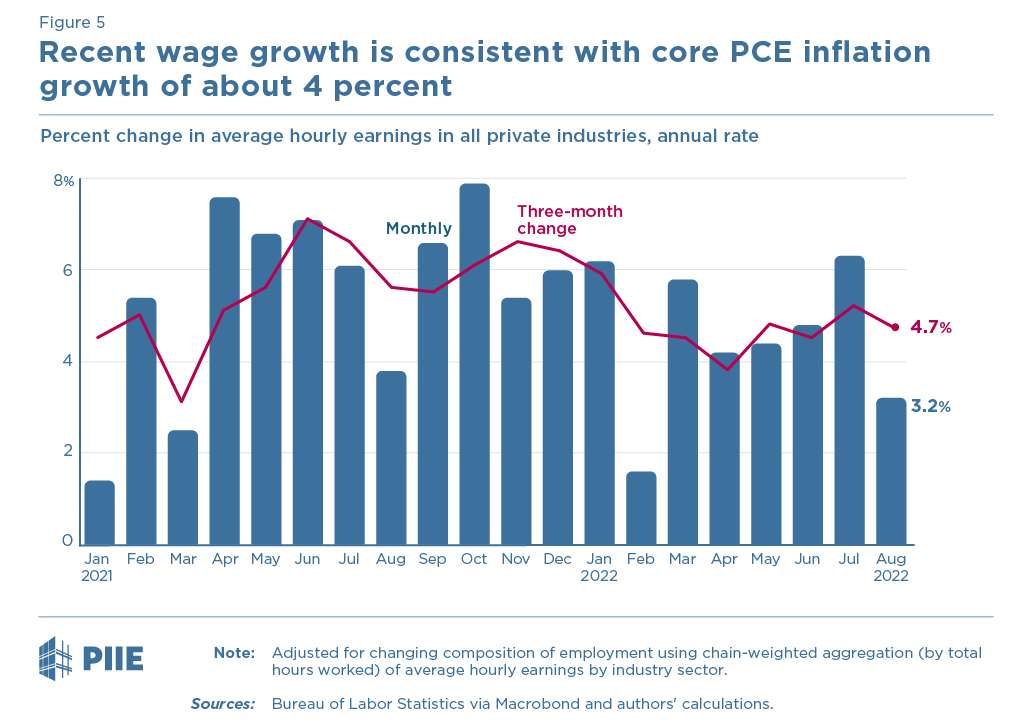 The labor market shows that in a very important respect the real side of the economy remains strong. Although the 1973 recession coincided with strong job growth, the demographic situation was very different then, and today the labor market looks very far from recessionary in the first eight months of the year—in fact, it has been closer to an unusual boom than a recession.