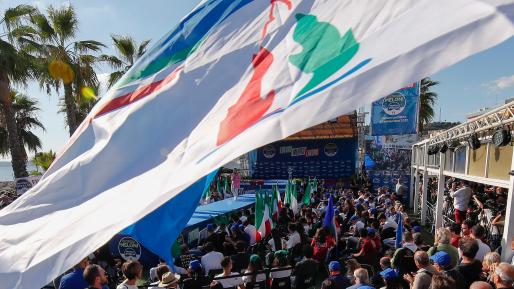 Italy votes for a coalition further to the right

The election victory by a new far right governing coalition in Italy has stirred consternation throughout Europe and the West. The fear is that the government of far-right Brothers of Italy (Fratelli d'Italia) Party, led by Giorgia Meloni, will pursue disruptive economic policies and clash with the leadership of the European Union (EU). The fears are overblown, however. As prime minister, Meloni will be hamstrung by Italy’s fragile financial situation and will not likely usher in new economic clashes with the rest of the EU and the European Central Bank (ECB). Instead, her government will pursue conventional macroeconomic policies, while potentially pursuing confrontation with European institutions and rules on other issues, such as immigration and rule of law.

In policy terms, the new government’s most pressing issues will be the economy/energy crisis, the war in Ukraine, and Italy’s relationship with other EU members. Italy has been among the most fiscally aggressive EU members in combating the rising cost of energy. The nation’s leaders have been compelled to address Italy’s long-standing dependency on Russian gas for retail heating and a business sector with many small and medium businesses struggling with the price shock. Italy’s low growth rate and high debt stock have made it subject to heavy financial market scrutiny. As a result, Italy needs good political relations with the EU and ECB. Italy will likely suffer a loss of political influence at the EU level, but the new government’s policies will dictate preservation of the broader relationship to ensure economic and financial stability.

It will also take time for Meloni to form a government, leaving Prime Minister Mario Draghi in charge for months, overseeing passage of Italy’s next government budget. That process will require policy reforms to unlock EU grants to Italy as part of the pandemic recovery fund. Indeed, the incoming government will have a political interest in seeing Draghi do this political “dirty work” before departing, as Meloni can then blame her predecessor for any economic pain inflicted on various groups in Italian society.

Another incentive for the new government’s moderation stems from the economic benefits of unprecedented EU loans and transfers of nearly €200 billion in the coming years. Equally important is Italy’s access to the new ECB Transmission Protection Instrument (TPI) to intervene in sovereign bond markets and Italy’s adherence to the EU’s macroeconomic rules and policy conditionality. If Meloni picks an economic fight with the EU, Italy may soon be without an ECB financial insurance policy, jeopardizing financial stability and the new government’s political support.

Meloni clearly benefited electorally from the outsider status as the only major party not to have been part of the parliamentary support for Prime Minister Draghi’s previous technocratic government. She secured Italy’s large floating “protest vote” for her party in a historically low-participation election. But contrary to much of the political commentary, her victory did not signify a massive voter shift to the right. Instead, Italy’s electoral system, which mixes first-past-the-post directly elected seats with a proportional representation system that rewards electoral alliances, benefited Meloni as head of the largest single party in a right-wing alliance with the League (Lega) and Forza Italia parties, each with only 8 to 9 percent of the vote. The combined vote of the three parties of around 43 to 44 percent is not that different from the combined support of the right-wing coalition that ushered Silvio Berlusconi to power in the earlier decades. Only now, the center of gravity in Italy’s right has shifted further to the extreme.

The biggest numerical loser in the election is the populist Five Star Movement (MS5), reduced from about 33 to 15 percent of the vote. But its performance exceeded its earlier polling, likely securing the leadership of its leader, Giuseppe Conte. MS5 will remain a leftist political force in Italy. Despite their joining Meloni’s governing coalition, League and Forza Italia reduced their standing, ensuring her standing as the undisputed political leader of Italy’s right.

In fact, the League’s weakness may pose problems for Meloni. Matteo Salvini’s leadership of the League will be questioned by many inside his party, and he must secure a prominent place in the coming coalition negotiations to avoid further embarrassment. He may respond by becoming a rebellious coalition government member, weakening its stability. Forza Italia’s politics are linked to its aging founder, former prime minister Berlusconi, but the party is part of the European center-right European People’s Party and thereby serves as a guard rail against the government’s potential drift further to the right. Berlusconi, with his reputation for mercurial behavior, could bolt from the coalition, causing a crisis.

The failure of Italy’s centrists and left parties to form an electoral alliance ahead of the elections—their combined vote actually exceeded that of the right-wing coalition—makes it likely that former prime minister Enrico Letta may have to step down as head of the far left Democratic Party.

In the absence of opportunities to shift budget and fiscal policies, the new Meloni government may be encouraged to clash with the rest of the EU on issues concerning rule of law and democracy. Meloni has long supported despots like President Bashar al-Assad in Syria. But unlike Salvini, a long-time Vladimir Putin ally, Meloni has persistently supported Ukraine against Russia, so Italy is not likely to challenge EU policies on sanctions even if it does reduce weapon deliveries to Kyiv. Meloni has pledged to continue this support in a direct Twitter conversation with Ukrainian president Volodymyr Zelensky.

Instead, the major political question mark surrounds whether Meloni will support the EU’s tough stance against Poland and Hungary, including a suspension of budget disbursements to the two countries over their lack of judicial independence, corruption, and the democratic process. Meloni’s party previously opposed sanctioning Hungary and endorsed the country’s democratic record. Were Italy, Hungary, and Poland to vote together, they would not alone be able to block qualified majority votes in the EU Council. But such actions would strengthen Prime Minister Viktor Orbàn of Hungary and the ruling Polish party’s opposition to any EU attempts to punish them.

In other economic spheres, the Brothers of Italy Party may also oppose foreign takeovers of Italian companies, potentially setting up clashes with other EU members and EU institutions. But the main clashes will likely be over the rule of law and democracy.

Bridging the North-South Divide in the Euro Area