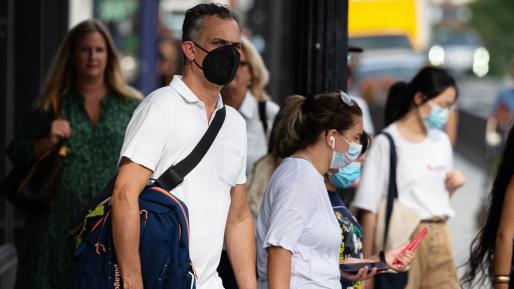 The US labor market accelerated in October, reversing the slowdown in job growth in August and September. The employer survey, which is generally more reliable, showed that the US economy added 531,000 jobs in October, slower than the average pace of 1,027,000 in June and July, but faster than the upward-revised 398,000 in August and September. The delta variant of the coronavirus likely continued to play some role in October. Cases and deaths fell through the month but remained at relatively high levels, while some high-frequency measures like in-person dining and air travel showed modest improvements. Unlike earlier waves of the pandemic, however, delta seems to be slowing but not reversing progress.

The economy is still 6.2 million jobs short of pre-pandemic projections. If job growth continues at this pace, it will take another 13 months to close the gap. A faster pace of job growth will require the unusually low rate of exit from unemployment to rise as well the labor force participation rate to rebound.

The gap between the labor market and normality continued to narrow in October, but the economy remains 6 million jobs short of pre-pandemic projections as shown in figure 1. 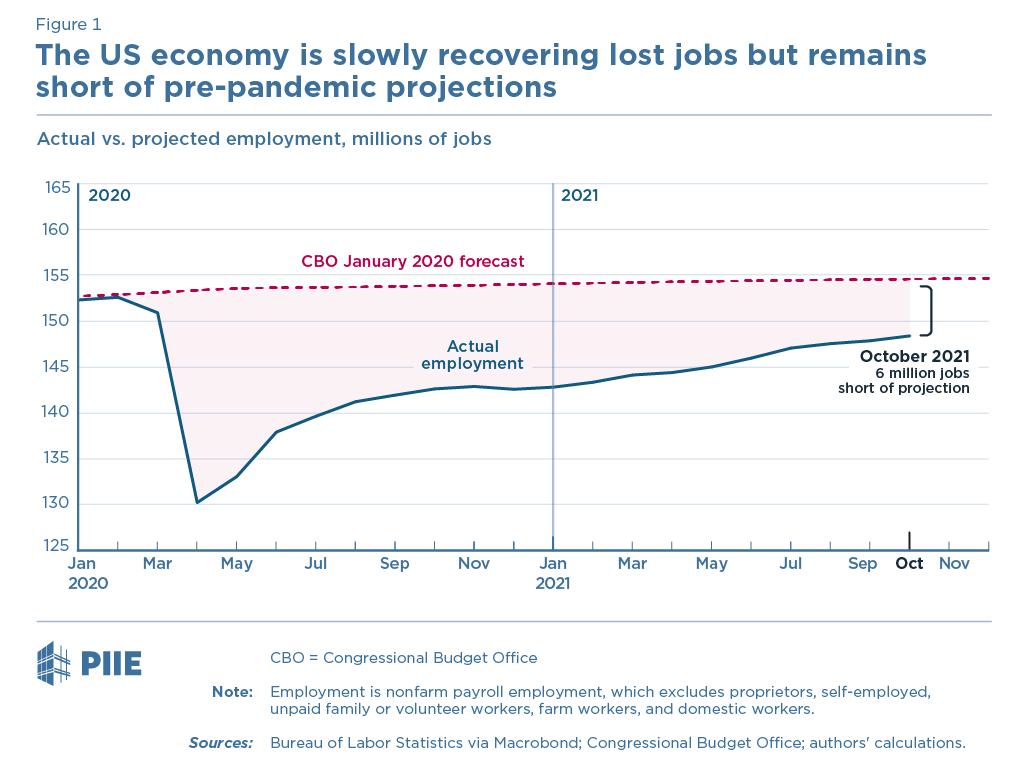 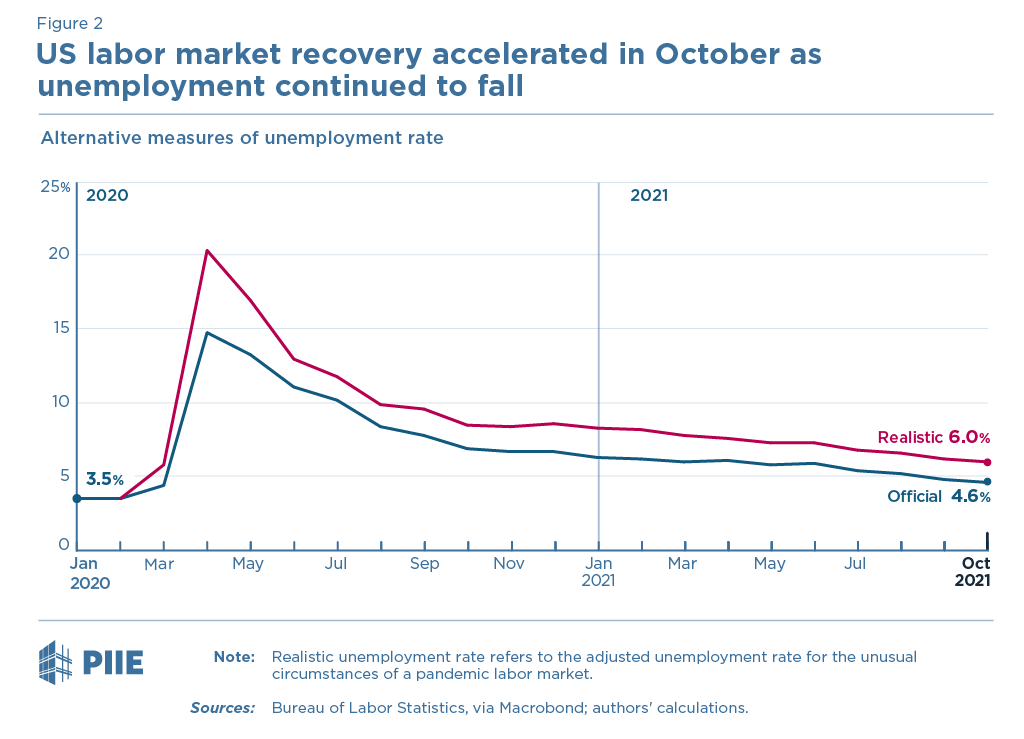 That leaves 0.8 percentage point, or about half of the total decline in the labor force participation rate, unaccounted for by either changing demographics or elevated unemployment. The relative contributions of these three components are shown in figure 3. 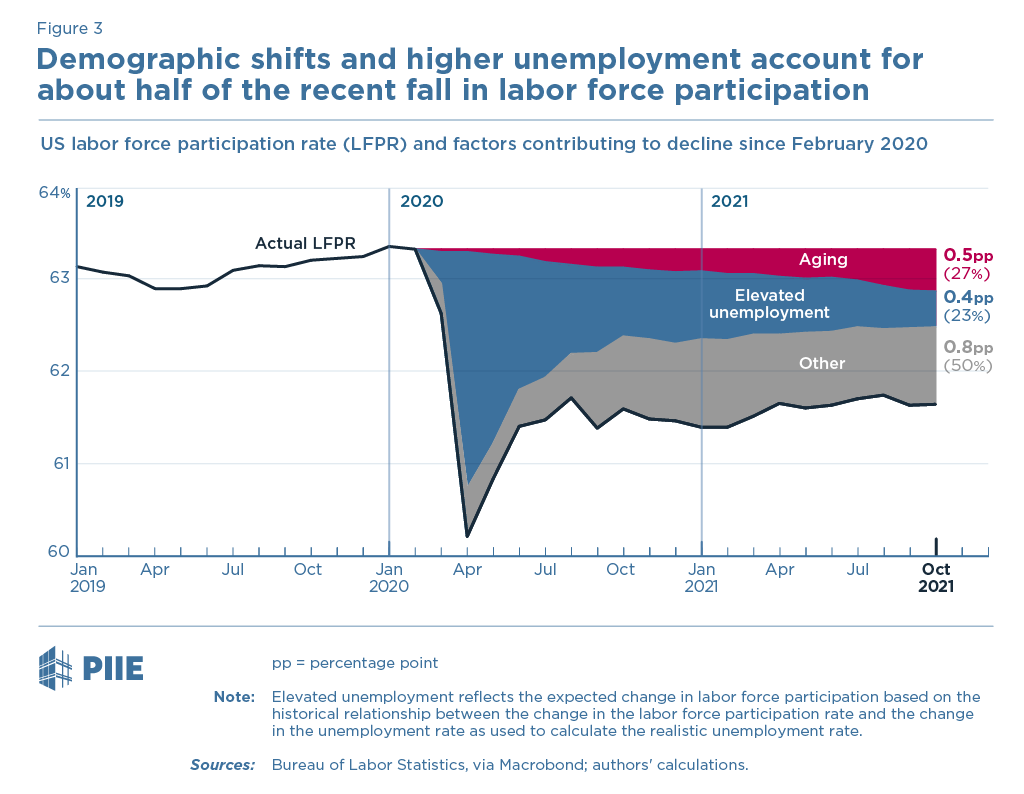 A number of factors could be contributing to the decline in the labor force participation rate, including ongoing concerns about contracting COVID-19, increased depressive and anxiety disorders associated with COVID-19, a reduced inflow of workers leaving temporary retirement, and income effects associated with larger cash balances that give people more flexibility on when they need to return to work.

Some of these factors, including the decline associated with high unemployment, should improve as the pandemic recedes, while others may take longer to resolve or may even be permanent. But returning to the pre-pandemic employment path will require a substantial increase in labor force participation.

Nominal wages were up 0.4 percent in October (4.4 percent at an annual rate), an amount that likely slightly understates true wage growth because of compositional effects as lower-wage workers were added (a rough composition adjustment to reflect the changing industry mix showed wages up 5.2 percent at an annual rate in October). While this is somewhat slower than September's particularly fast wage growth, it is still well above than the pace prior to the pandemic. October inflation, however, is projected to be even higher so that workers may not experience real wage gains.

Through September, a more accurate measure of compensation and wages that is not seriously distorted by composition effects showed strong nominal compensation gains that are above their pre-pandemic trend, as shown in figure 4. Further, consistent with tight labor markets, wage growth from June to September as measured by the Employment Cost Index was at its fastest pace since the early 1980s. Other sources indicate that workers in the bottom quartile of the wage distribution have seen the fastest wage gains. Nevertheless, nominal compensation growth has not kept pace with inflation, so real compensation has fallen since prior to the pandemic. 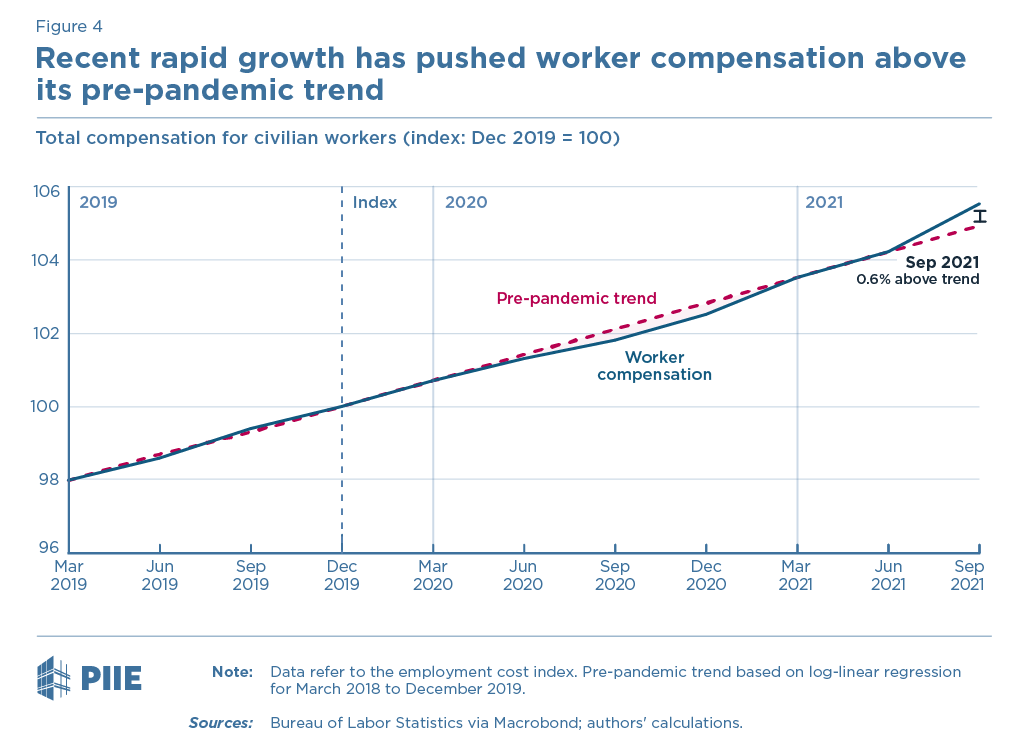 The strong nominal wage growth is consistent with other indicators of tight labor markets. Job openings and quits have remained elevated in recent months, showing both that jobs are plentiful and also that people have the confidence to quit their jobs, knowing they will be able to find new ones. Data from the US Bureau of Labor Statistics and Indeed Hiring Lab shows that openings were likely around 11 million  at the end of October (corresponding to one of the highest rates of opening on record, figure 5). This represents a marked increase from the end of June, even though 2.4 million jobs have been filled in the interim and the delta strain has spread rapidly. 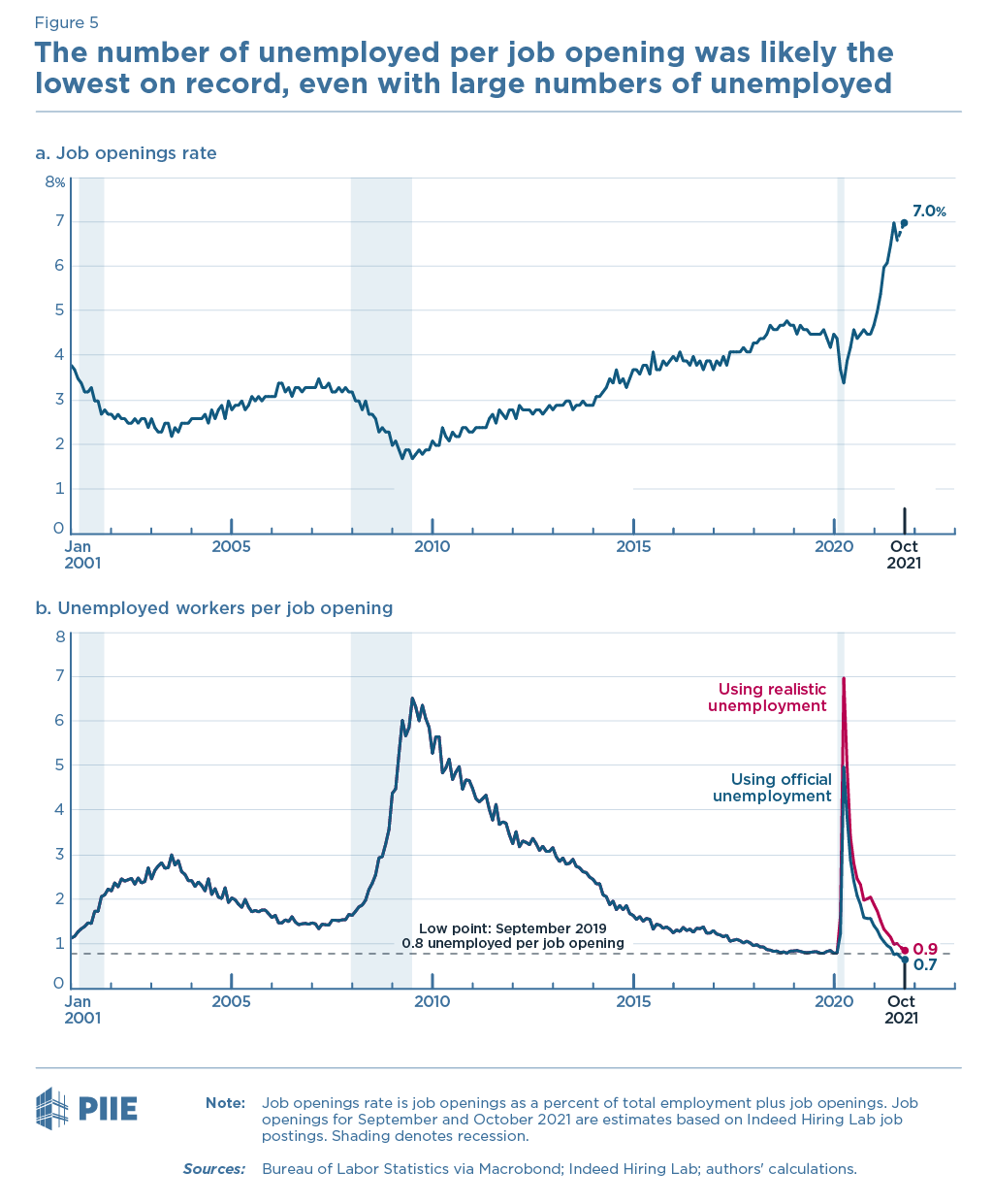 More time should help with the recovery of millions of jobs, but it remains uncertain whether it will bring back all 6 million missing jobs or just a subset of them and how long this process will take. The biggest wildcard is not the strength of demand or desire of employers to hire but the desire of workers to find jobs.

The next many million jobs should be relatively easy to get back given the large number of openings and continued rapid economic growth. More difficult will be the last several million jobs. Jobs may end up short of pre-pandemic projections if people have left the labor force for good (e.g., due to early retirement) or if other changes have permanently reduced labor demand (e.g., employers hiring fewer workers who are higher skill and higher paid). The hope is that all the jobs can be regained, productivity could rise to support wage increases, and continued high levels of demand could put the economy on a future path that is better than what was expected before the pandemic. Time will tell.