US workers are quitting jobs at historic rates, and many unemployed are not coming back despite record job openings

The US labor market has added an average of 541,000 jobs per month over the last three months, a pace that would be rapid in normal times but is slower than expected given the 10 million jobs shortfall from the pre-pandemic trend and the record number of job openings. The main reason for the lack of much faster job growth has been the unusually low number of people transitioning from unemployment to employment—a flow that should be at or near record levels given the overall labor market. Workers are also quitting jobs at record rates—but, as explained below, this is almost exactly what one would have predicted given the large number of job openings.

Transitions from unemployment to employment have likely been reduced by several factors, many of which interact with each other, including time needed to find a job, the lingering effects of the pandemic and the pace of vaccinations, and increased and expanded unemployment insurance. The good news is that most of the factors holding back transitions from unemployment are probably temporary, and if the rate at which people are leaving unemployment for jobs returns to what would be expected given the overall strength of the economy, the pace of job growth could rise to 750,000 or more a month. There may be a speed limit on job growth, but it is likely to be well above the recent pace.

The Labor Market Is Very Hot—as Evidenced by Job Openings

The Bureau of Labor Statistics (BLS) reported that there were a record 9.3 million job openings at the end of April 2021, resulting in a record-high job openings rate of 6.0 percent. In May, job openings increased further, according to Indeed Hiring Lab, resulting in a projected job openings rate of 6.2 percent (see figure 1). Record job openings and growth in average nominal hourly earnings at a 4.5 percent annual rate over the last three months (a number that likely understates the true growth rate because of changes in the composition of workers) suggest that while the economy is well short of maximum employment, it is not mainly because of insufficient labor demand.

The Quits Rate Is at a Record High: That Is Not Surprising

Typically, one of the hallmarks of a hot labor market is that workers have the confidence to quit their jobs knowing that they will be able to find new and better ones—either directly transitioning to those jobs or by taking a brief break between jobs. In April, 2.7 percent of workers quit their jobs, the highest rate in the history of the BLS series. This is not surprising; in fact, as shown in figure 2, it is almost exactly what would have been predicted given the record rate of job openings. Whenever openings are higher, quits are higher. (Note, it is also generally the case that when unemployment is lower, then quits are higher—but this relationship is not currently holding, more evidence for the supply-driven nature of the current shortfall from maximum employment.) 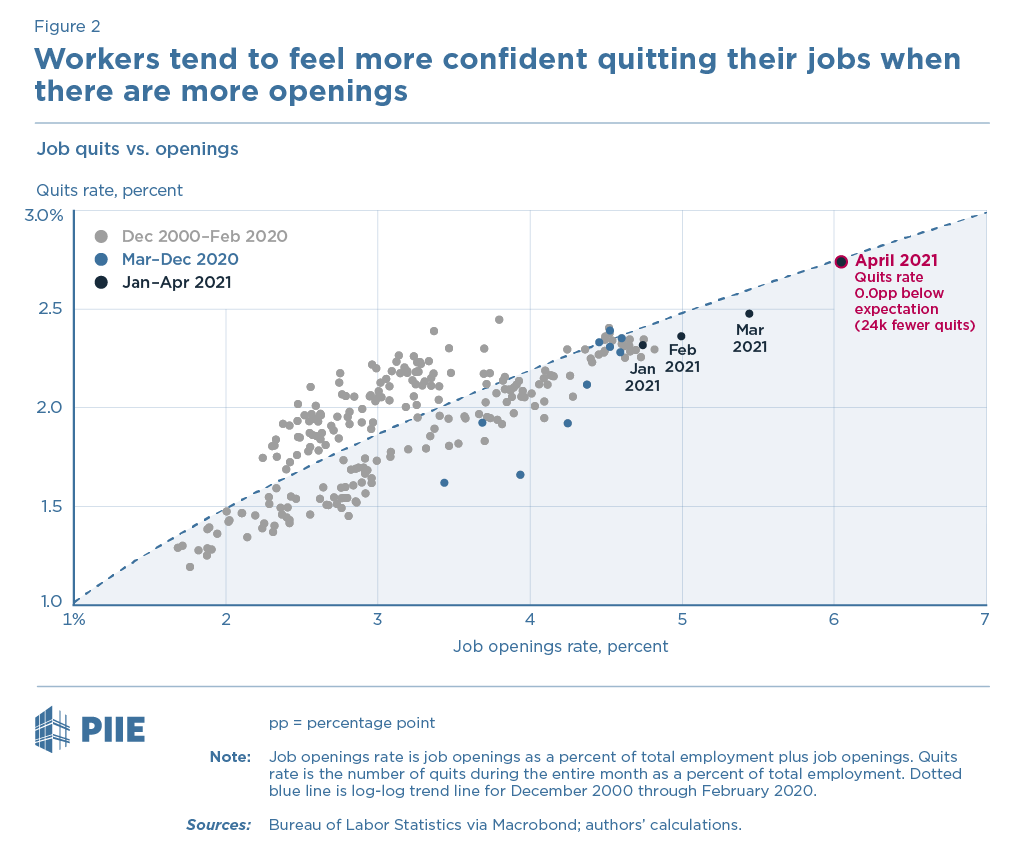 Other factors may be at play, and there is some evidence that transitions from employment to unemployment (which includes both quits and layoffs) are larger than normal. There are anecdotal reports of early retirements, people rethinking their career trajectories, reallocations as people leave their temporary pandemic jobs, and people being able to afford to quit their jobs because of stimulus payments or in some cases the possibility of getting unemployment insurance (note, unemployment insurance is generally not available for people who quit their jobs but in practice it appears to have been feasible for some job quitters to get it during the pandemic period). But it is unlikely that any of these are the main story—which is simply that when jobs are plentiful (as measured by openings), workers tend to have more confidence to quit their jobs to find better ones.

The pattern of predicted relative to actual quits is also not particularly notable across industries, with actual quits slightly elevated in retail trade and transportation, warehousing, and utilities, somewhat below expectations in mining and logging and professional and business services, and essentially on target in leisure and hospitality, as shown in the table.

The Big Story Is People Are Not Leaving Unemployment for Jobs

In a typical month, 26 percent of the unemployed take a job (many other people also become unemployed, so the net reduction in unemployment falls well short of the gross numbers).

Overall, based on the historic relationship between job openings and transitions from unemployment to employment, one would have predicted that 34 percent of the unemployed in April 2021 would have transitioned to employment in May 2021, which would have resulted in 1 million more unemployed people finding jobs per month (figure 3). Given how high the openings rate is relative to its historical values, one might not want to take the relationship too literally; this far out of sample, it is possible that the relationship diminishes. But at the very least, there is no reason the transition rate should not be around, say, 29 percent, the 80th percentile of its historical value. Even at this more modest level, an extra 500,000 people would have transitioned from unemployment to employment every month. 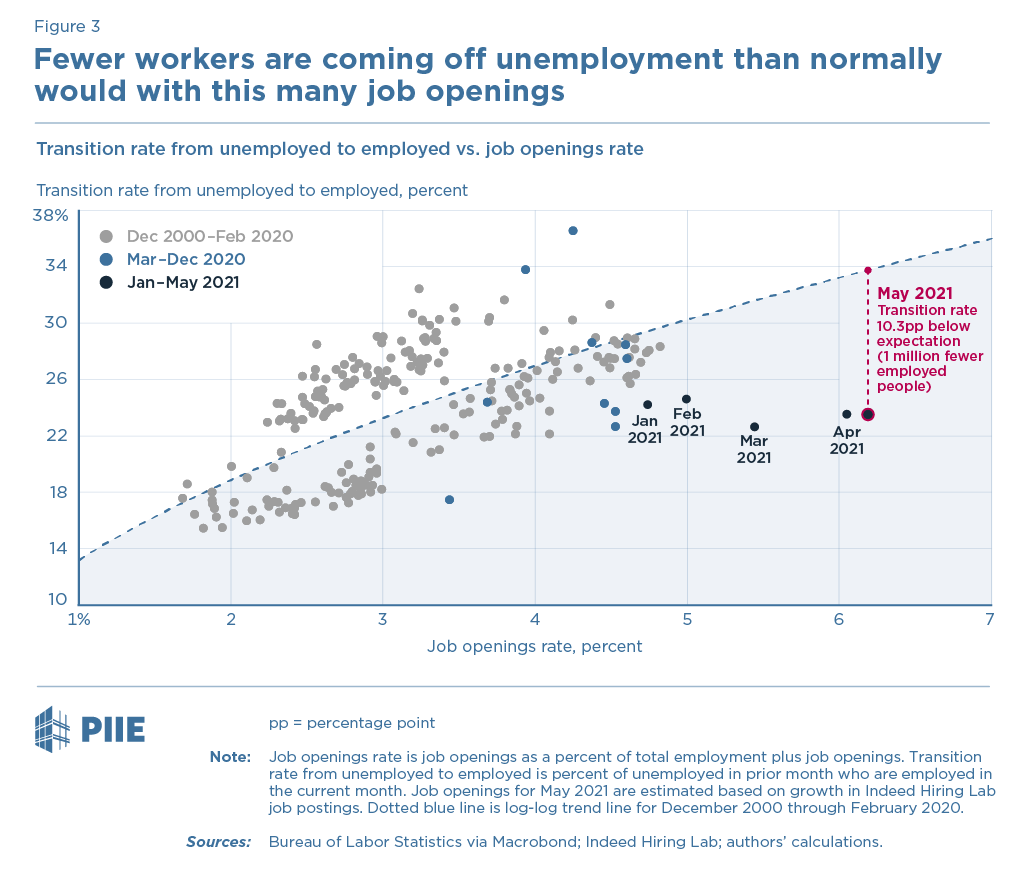 The 5 to 10 percentage point shortfall in the transition rate from unemployment to employment has several possible explanations, and its causes may have shifted over the last nine months. Federal Reserve Bank of San Francisco economists Nicolas Petrosky-Nadeau and Robert Valletta estimate that the additional $300 per week in unemployment insurance benefits could reduce the job finding rate by up to 3.5 percentage points based on the impact of unemployment insurance on job search in 2020 (their estimates do not include the additional weeks of unemployment insurance or the pandemic programs). Other reasons include the lingering pandemic, the lags in vaccinations in some areas, childcare, and the possibility that people are taking more time to rethink their lives more broadly. Almost all of these explanations are good news for faster job growth in future months—a pace that could easily rise to 750,000 jobs or more per month.

Given the number of job openings, filling a substantial fraction of the current 10 million jobs shortfall should get easier in the coming months. The biggest uncertainty remains whether and when the entire gap can be filled or if the economy will fall short because the last jobs are the hardest to find, some workers will have withdrawn from the labor force entirely due to early retirement and other factors, and businesses may end up with higher productivity and fewer workers. But at least for a while the speed limit on job creation should be considerably faster than it has been to date.