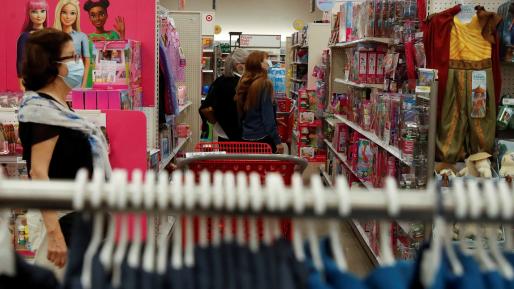 Worker bargaining power has been no match for high inflation

Over the last three months, US nominal compensation, wages and benefits not adjusted for inflation, rose at a rapid 5.4 percent annual rate for all civilian workers—leaving it 0.6 percent above its pre-pandemic trend, according to newly released Employment Cost Index (ECI) data from the Bureau of Labor Statistics (BLS). This is notable because the very high unemployment rate over the last year would have been expected to exert downward pressure on nominal compensation, as it did during the global financial crisis. Instead, the fast pace of nominal compensation growth is consistent with other indicators, especially job openings and quits, which suggest the labor market is considerably tighter than it would seem given the high unemployment rate and low labor force participation rate.

Looking at wages instead of compensation tells a similar story—a very strong increase from June to September, tracking well above expected for nominal growth but still not enough to keep up with the inflation the United States has experienced over the course of the pandemic.

The outlook for real compensation growth depends on several factors including: (i) the tightness of labor markets, which are likely to experience increases in both labor demand and labor supply over the next six months; (ii) whether employers adjust compensation growth up to reflect higher inflation, something that was standard in contracts and bargaining in earlier periods of high inflation but has largely been absent for several decades; and (iii) the outlook for inflation, in particular whether it persists well above the historical expectation of 2 percent annual growth.

From June to September, nominal compensation rose at a 5.4 percent annual rate, a pickup from the pace earlier in the pandemic period and faster than the rate of inflation over the last three months. This reflected faster growth in wages and salaries, as growth in benefits slowed, largely because the cost of health benefits has risen more slowly.

Nominal compensation growth slowed slightly in the earlier part of the pandemic but has increased steadily since the end of last year. As a result, it is now above its pre-pandemic trend as shown in figure 1. (The story is similar for wages and salaries, which are 0.9 percent above the pre-pandemic trend.) 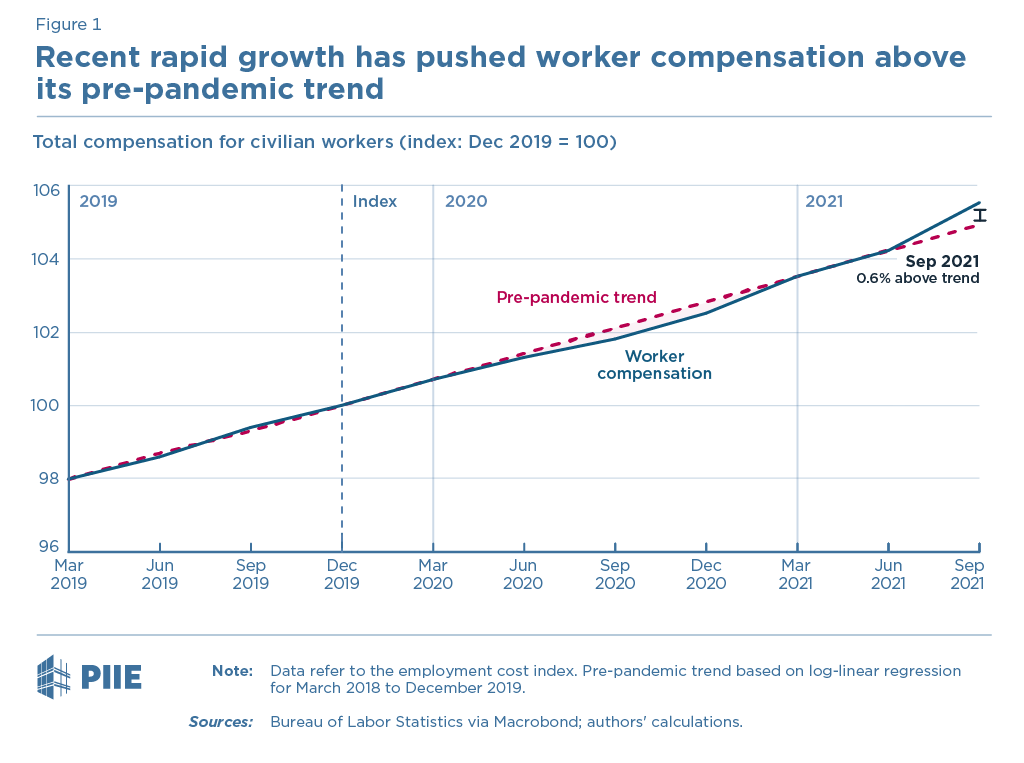 Normally the extremely high levels of unemployment experienced over the last year—which peaked at 15 percent and were even worse than reported given misclassification and unusually large exits from the labor force—would have been expected to exert downward pressure on nominal compensation growth (assuming expectations for productivity growth and inflation were roughly unchanged). Over the last year, however, compensation growth has risen. That is likely due to a number of reasons. One possibility is a "compensating differential" for people whose jobs have become riskier or are faced with more intense work to make up for the many other people not working. A second is that much of the decline in employment reflects a reduction in labor supply, while the record-high level of job openings suggests that labor demand is very high. Overall, the ratio of unemployed workers per job opening, as shown in figure 2, is consistent with a tight labor market. 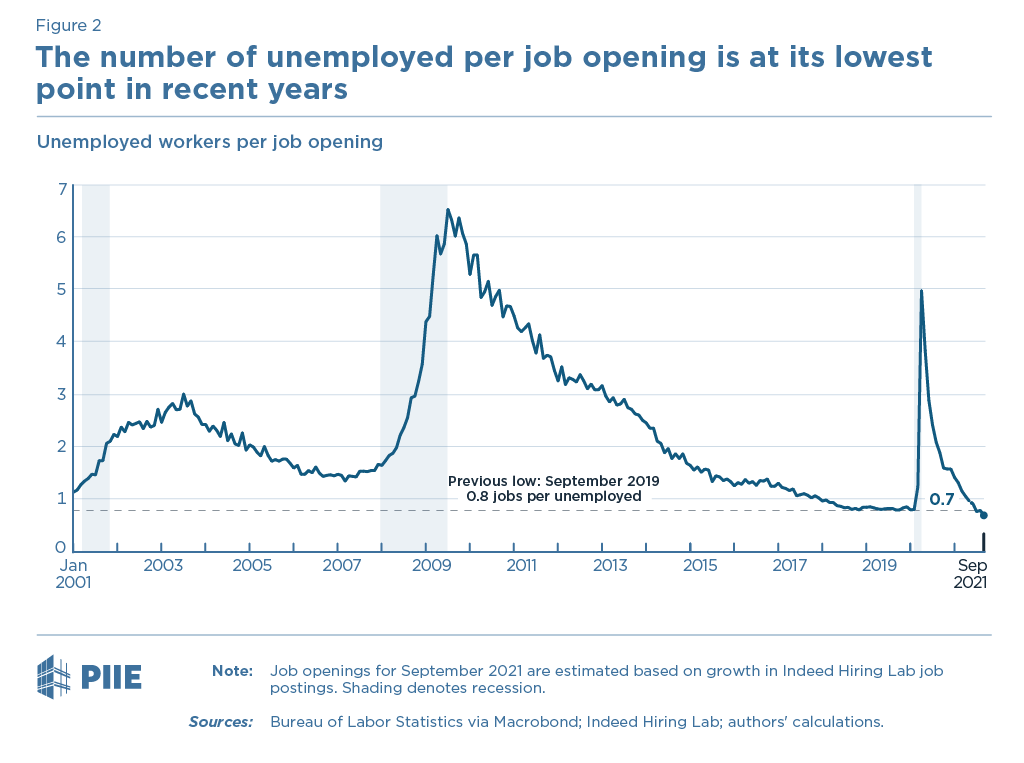 Inflation has slowed somewhat over the last three months but remains well above normal, growing at a 4.7 percent annual pace as measured by the consumer price index. Since the pandemic began, consumer prices have risen at a 3.5 percent annual rate, bringing them 3 percent above their pre-pandemic trend as shown in figure 3. 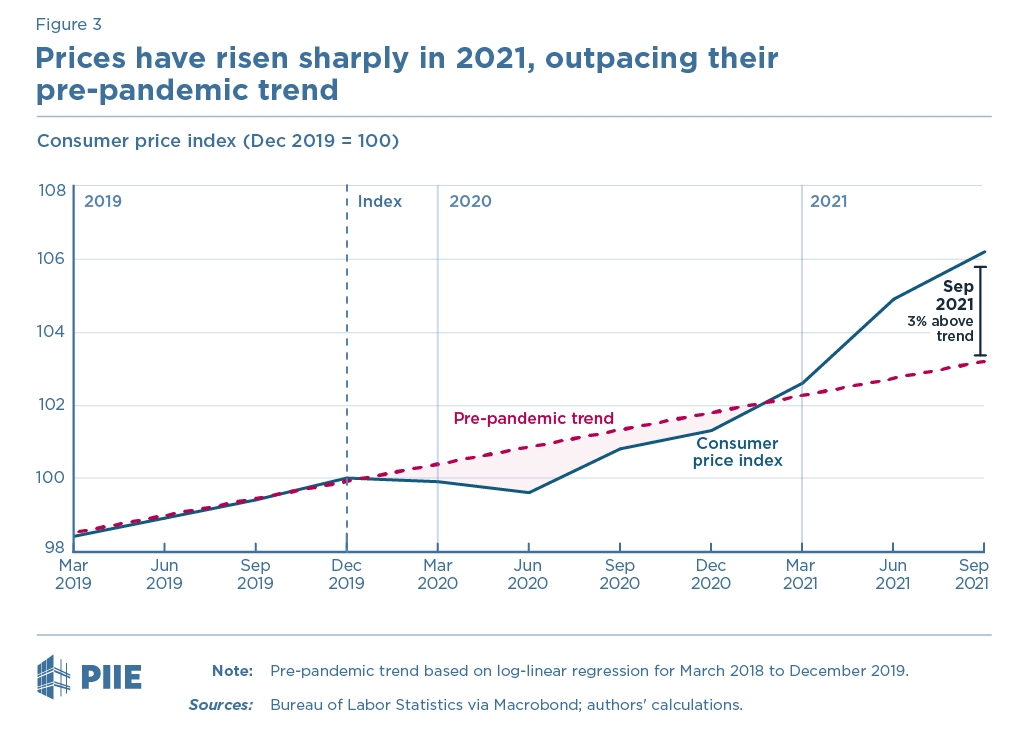 Transitory factors have contributed much less to inflation in recent months, compared with earlier in the year and may even have subtracted from inflation. Between March and June, about half of the inflation was attributable to increased vehicle prices, which themselves are largely due to a microchip shortage and the dynamics of rental car fleet adjustments. Over the last three months, vehicle prices have had only very modest, or even negative, contributions to inflation as prices have leveled off. Contributions to inflation from pandemic-affected services, such as airfare, admissions, and hotels, have also been negative in recent months and those prices may rebound if the virus continues its decline.

Increased demand has also played a role in higher inflation, and there is reason to believe that demand may stay elevated (because of higher bank balances, extremely accommodative financial conditions, and continued spendout of stimulus) while supply will continue to face shortfalls (because full labor market recovery will take time and because of other pandemic-related scarring and protracted supply chain problems). In addition, rent and other shelter costs are likely to increase at a faster pace, and some compensation increases may pass through to price increases. As a result, our expectation is that inflation will continue to be well above its historic 2 percent value, with forecasters and bond markets increasingly marking up their forecasts for inflation.

Real compensation increased dramatically in the first six months of the pandemic, as prices fell while compensation continued to grow. Since then, however, price growth has been more rapid than compensation growth, and so real compensation has been falling. It rose slightly from June to September, but overall real compensation is still down 0.6 percent since December 2019. Real compensation would have been expected to rise over this period, so relative to trend it is down 2 percent (figure 4), with a similar shortfall for real wages. 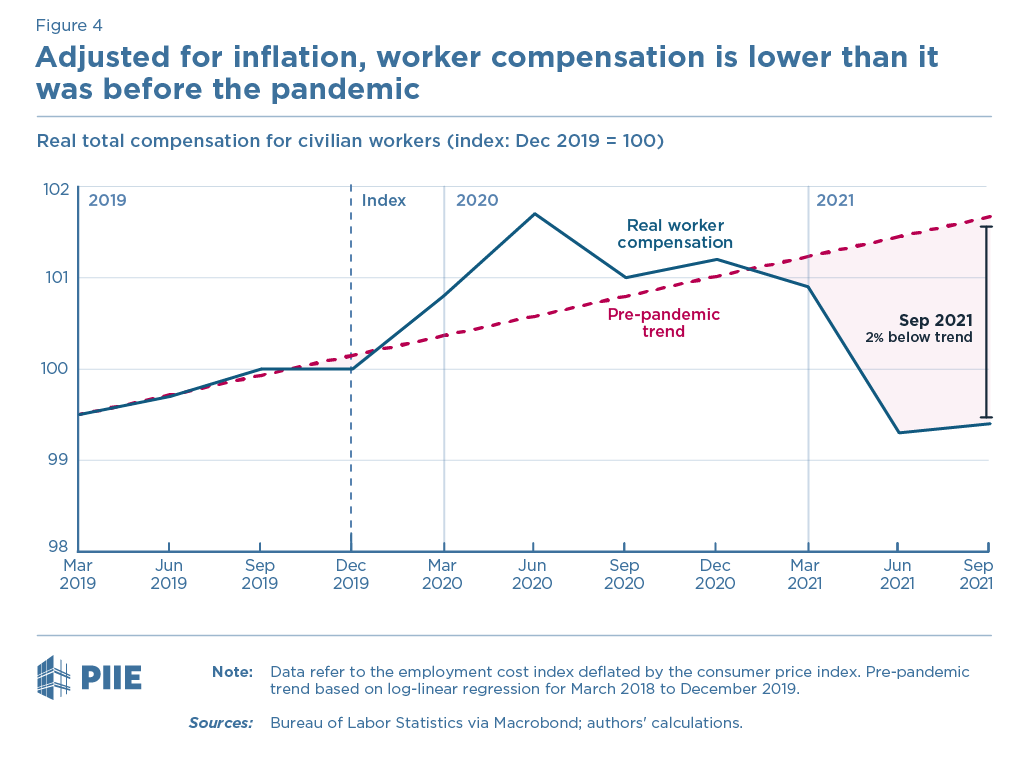 The growth of compensation has varied across industries, from a high of a 5.7 percent annual rate since December 2019 in leisure and hospitality to a low of a 2.5 percent annual rate for utilities (see table). In most sectors, however, faster inflation has resulted in lower real compensation and has left real compensation growth below trend in all sectors except leisure and hospitality (and real wages are below trend in all but two sectors). The pattern of compensation growth is a result of a number of idiosyncratic factors depending on the pace of reopening and the supply of workers for different sectors, although there is some indication that compensation growth has been faster in lower-wage sectors. 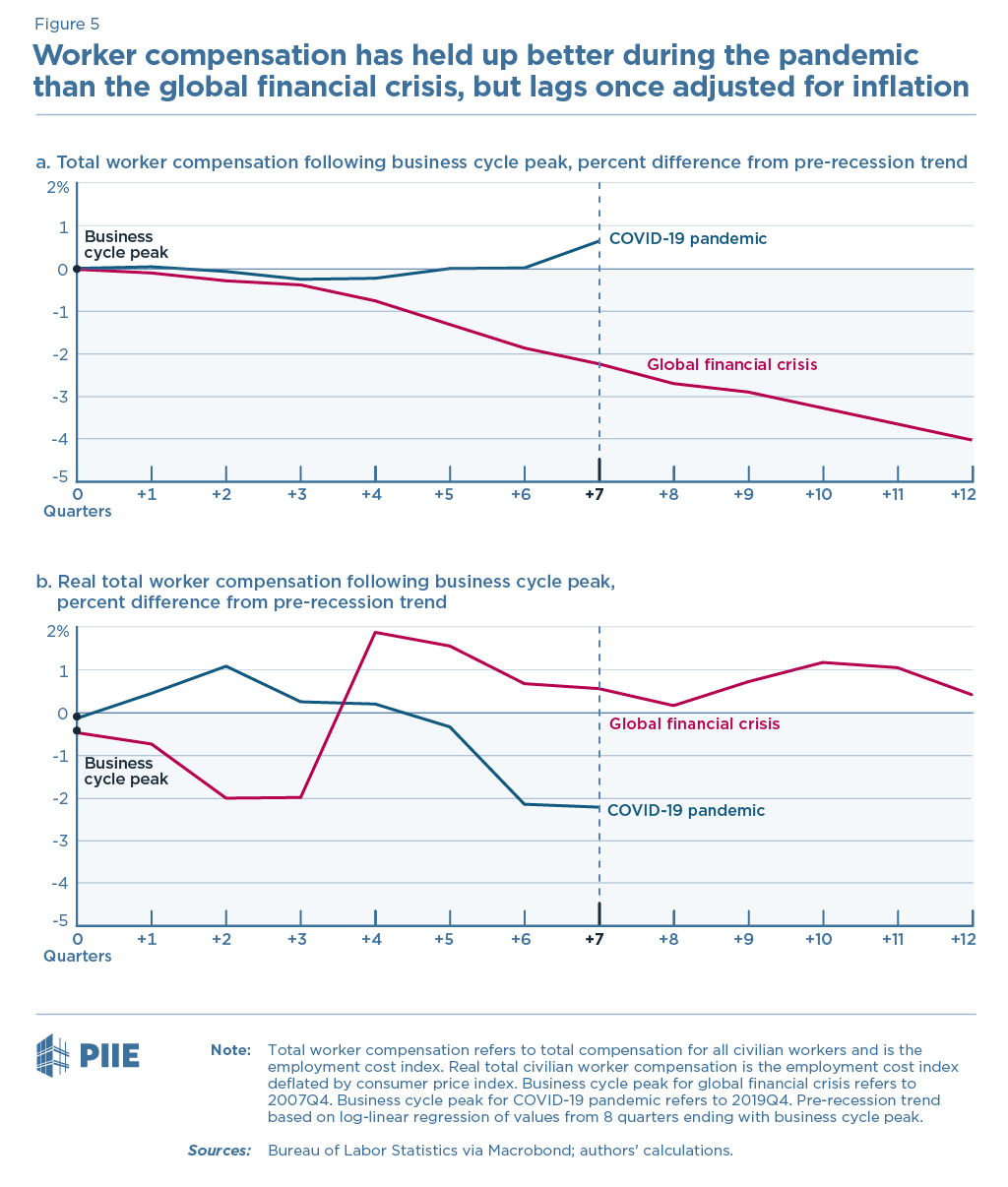