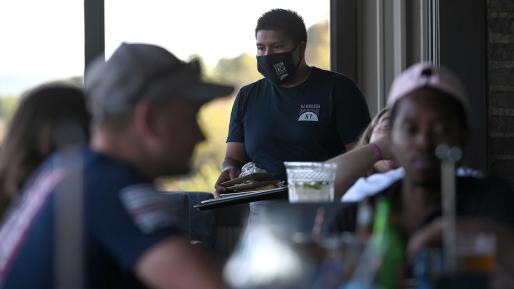 The US labor markets continued to improve in September, but the improvement was much slower than the fast pace of recovery earlier in the summer and was a further slowdown from August. The employer survey, which is generally more reliable, showed that the US economy added 194,000 jobs in September, still slower than the 1,027,000 average pace in June and July and a further slowdown from an upwardly-revised gain of 366,000 jobs in August. The delta variant likely continued to affect employment data in September. Cases and deaths remained high and the recovery in in-person dining and air travel largely occurred later in the month. Unlike earlier waves, however, delta seems to be slowing but not reversing progress.

Much of the other data in the report was considerably more positive than the headline including: private sector jobs were up 317,000 with some indication that seasonal adjustment issues were behind the large fall in public education jobs, hours were up sharply, the unemployment rate fell by 0.4 percentage point (the second largest decline of any month this year) and the Black unemployment rate fell by 0.9 percentage point, nominal wages were up 0.6 percent (even faster than the very fast pace in the first eight months of the year and continuing the fastest growth for production and nonsupervisory workers since the early 1980s), and the data showed positive revisions for previous months.

The economy is still 6.9 million jobs short of pre-pandemic projections as the employment-population ratio for prime-age workers (those 25-54) is down 2.4 percentage point from before the pandemic. But the labor market continued to behave as if it was very tight: There were about 12 million job openings and 8 million unemployed workers—the most favorable ratio of openings to unemployed ever recorded. This likely played a role in the continued rapid growth of nominal wages.

The gap between the labor market and normality continued to narrow in September, but the economy still remains 7 million jobs short of pre-pandemic projections as shown in figure 1. 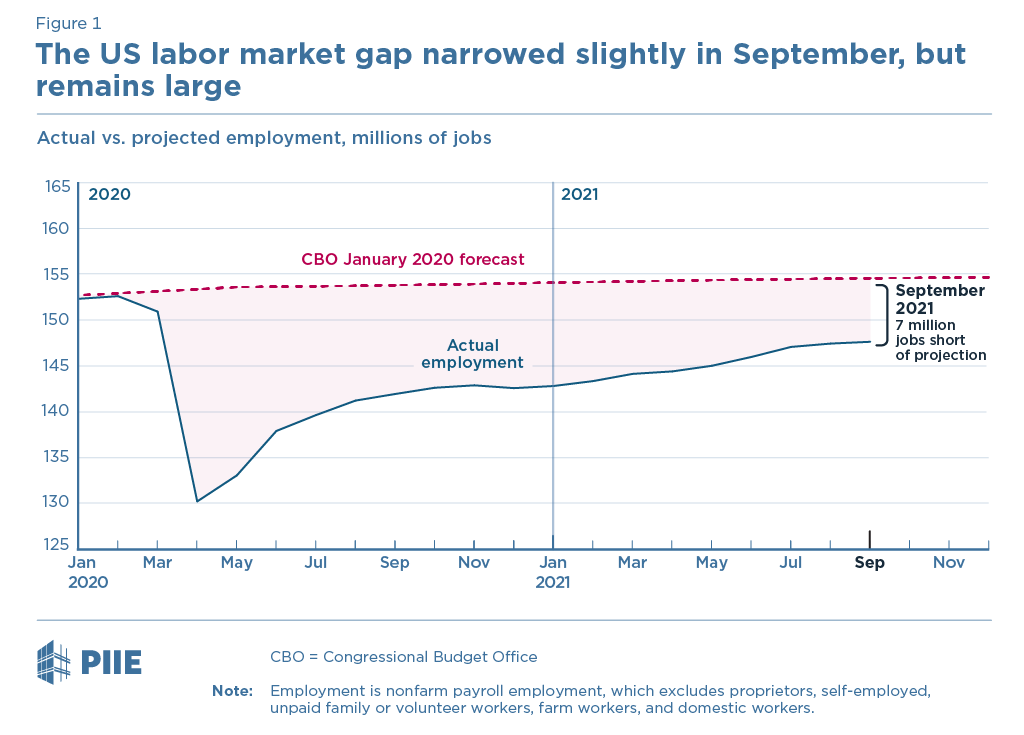 The unemployment rate and the "realistic" unemployment rate, which adjusts for misclassification and the unusually large decline in the labor force participation rate, tell a similar story in September (figure 2). Both measures showed substantial improvement in September, with each falling by 0.4 percentage point, though they remain well above the pre-pandemic level of unemployment. In total 2.2 million fewer people are in the labor force than would be expected given the overall state of the economy. This is consistent both with the still depressed labor force participation rate and employment-population ratio, which are 1.2 and 2.0 percentage points below their respective pre-pandemic values (adjusted for demographic changes). 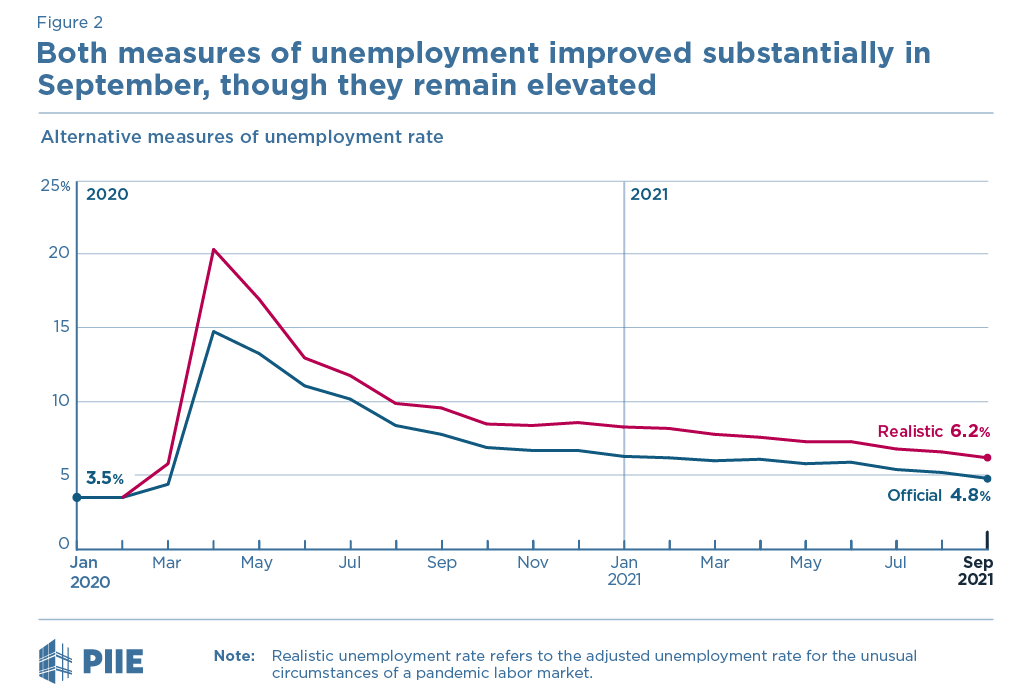 Like overall employment, the prime-age (25-54) employment rate continued to be substantially depressed in the third quarter of 2021 due to a combination of high unemployment and low labor force participation. Overall, the prime-age employment rate is 2.4 percentage points lower than in the fourth quarter of 2019 as shown in figure 3. This is a somewhat larger decline than the 2.0 percentage point fall in the overall employment rate after adjusting for changing demographics. In the early part of the pandemic, employment fell sharply across the board. While declines were similar for men and women, prime-age Black and Hispanic workers experienced particularly severe declines, falling up to 11.0 and 12.1 percentage points respectively. These gaps have generally narrowed in recent quarters but remain sizable. 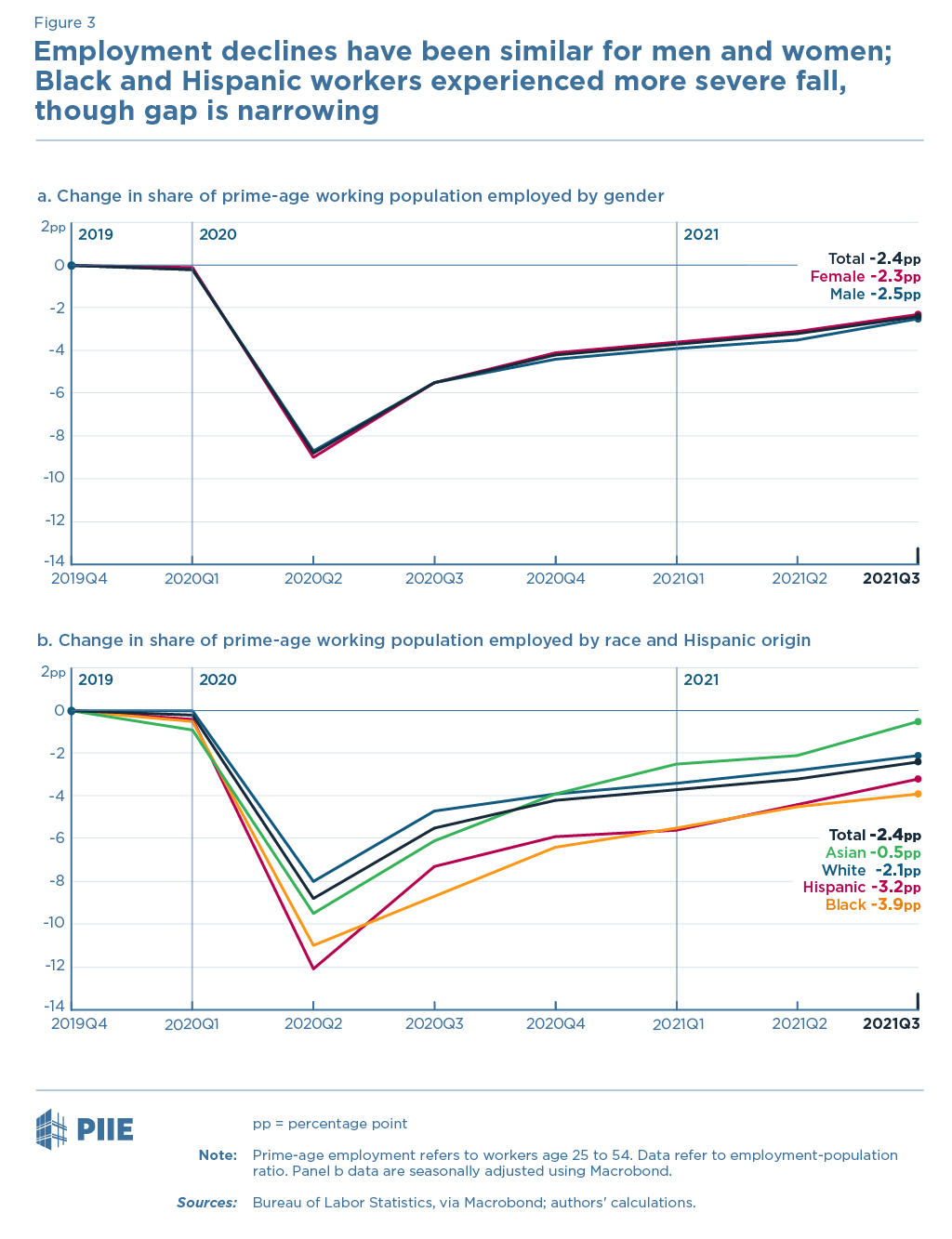 One sign of the tightness of labor markets is the fact that job openings and quits have remained elevated in recent months, showing both that jobs are plentiful and also that people have the confidence to quit their jobs knowing they will be able to find new ones. Data from the US Bureau of Labor Statistics (BLS) and Indeed Hiring Lab shows that openings were likely around 11.7 million (corresponding to the highest rate of opening on record) at the end of September. This represents a marked increase from the end of June, even though 1.7 million jobs have been filled in the interim and the delta strain has spread rapidly. 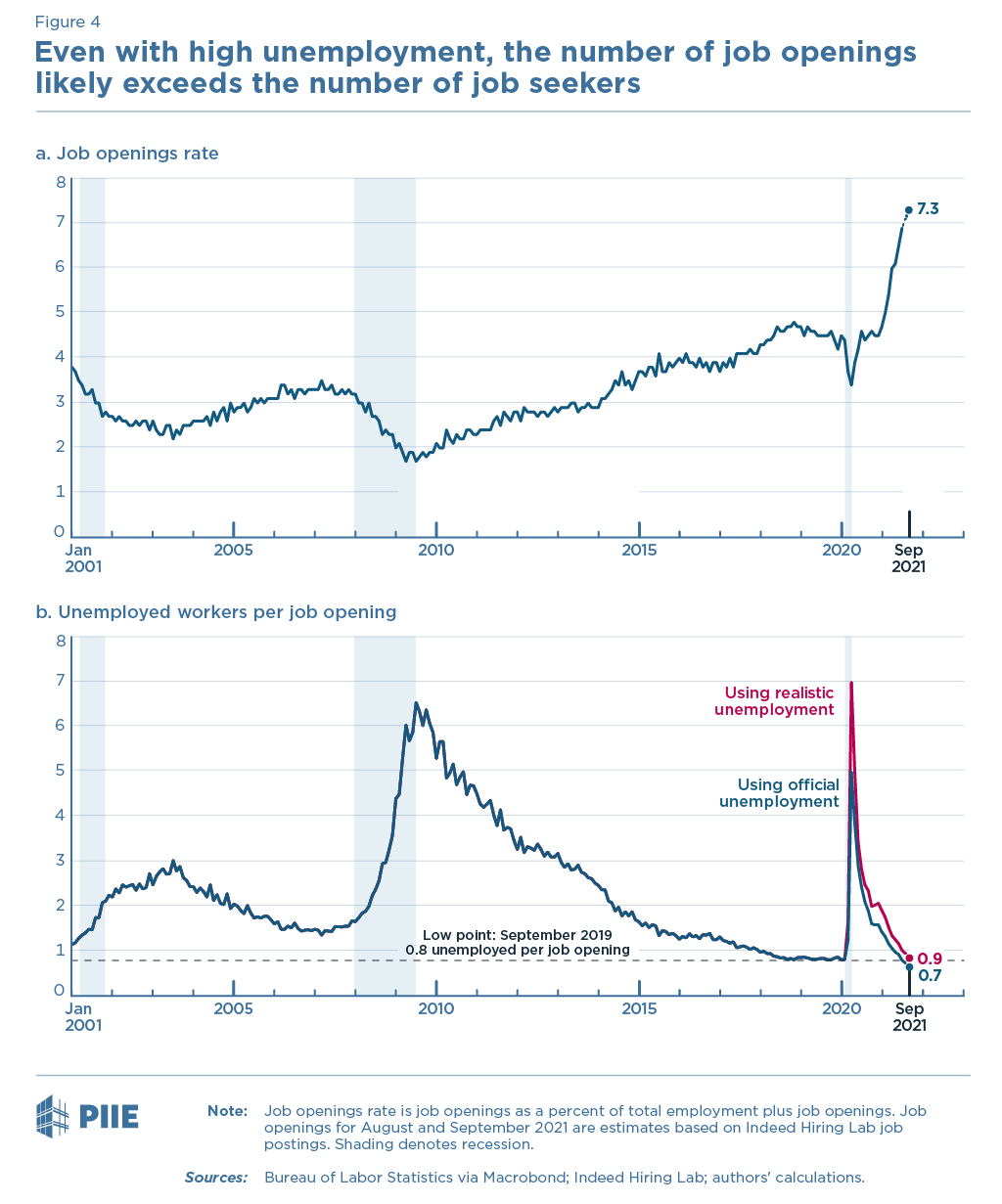 The best measure of the tightness of labor markets is wages. The pandemic period has been unusual in that very high unemployment did not result in any slower nominal wage growth for the workers who kept their jobs—instead wage growth continued at a relatively fast rate with the fastest wage growth for the bottom quartile of workers. Nevertheless, nominal compensation growth has not kept pace with inflation, so real compensation has fallen since prior to the pandemic. Wage growth continued to be strong in September at 0.6 percent, up from 0.4 percent in August, above the pace of nominal wage growth in the first eight months of the year. In previous months, when  relatively lower-wage sectors, like leisure and hospitality, were adding large amounts of jobs, the changing composition of employment meant that wage gains were likely understated. In September, with the slowdown in job growth, this was likely less of an issue.

September was a period of substantial change both from a public health perspective and economically. The latest wave of COVID cases and deaths appears to have peaked in September. While both remain at high levels, they are projected to decline further in the coming weeks. However, the data for the September employment report largely fall before this reduction in COVID. Higher frequency data in restaurant reservations and air travel suggest that much of the recovery didn't occur until later in the month, so employment effects may only show up with a lag as well.

The expiration of federal pandemic unemployment benefits in the remaining states at the beginning of September was a major change in the policy response to the pandemic. Between August and September, claims for unemployment fell by about two-thirds. While the magnitude of the effect from some states' early termination of these benefits is debated, to the extent that these benefits were affecting unemployed workers' incentives to look for work, their expiration may result in additional employment growth in coming months. But this expiration of support to unemployed workers and their families could also reduce demand if they reduce their spending. Again, the impact of this change is likely to be muted in September's data since the matching process between job seekers and employers does not happen overnight.

These factors will likely continue to play a role in coming months. More time should help with the recovery of millions of jobs, but it remains uncertain whether it will bring back all 7 million missing jobs or just a subset of them and how long this process will take.

The next many million jobs should be relatively easy to get back given the large number of openings and continued rapid economic growth. More difficult will be the last several million jobs. Jobs may end up short of pre-pandemic projections if people have left the labor force for good (e.g., due to early retirement) or if other changes have permanently reduced labor demand (e.g., employers hiring fewer workers who are higher skill and higher paid). The hope is that all the jobs can be regained, productivity could rise to support wage increases, and that continued high levels of demand could put the economy on a future path that is better than what was expected before the pandemic. Time will tell.