Turmoil in European Bond Markets, but the Sky Is Not Falling

After a period of relative stability over the summer and early fall, the jitters have again arrived in the European financial landscape. Markets for peripheral sovereign debt in the eurozone are now back to the levels seen in early May, before "Europe's Grand Bargain" in which Greece was awarded a lifeline from both the European Union (EU) and the International Monetary Fund (IMF) in return for austerity measures. But it is important not to get distracted by the problems of Greece, Ireland, and Portugal. The eurozone as a whole today remains a much more stable place than in early May 2010. The sky is not falling.

The latest developments in eurozone bond markets are illustrated in figure 1. 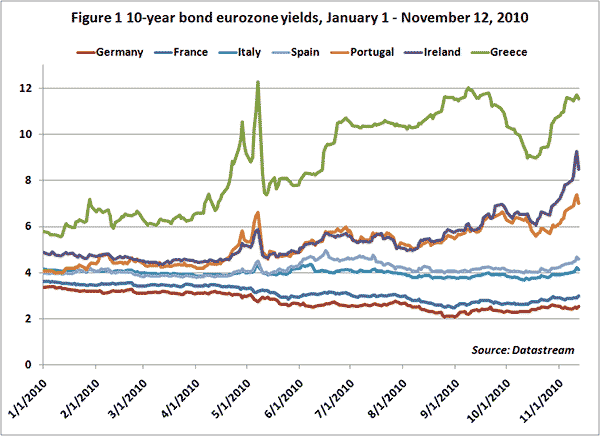 Several things are clear. Today's market concerns remain concentrated in the "true periphery" of the three small eurozone members  Greece, Ireland, and Portugal. There has been no rapid jump in yields for either Spain or Italy. Nor have the "euro benchmark" German yields dropped in a sudden flight to quality. As such, the broader eurozone situation today is different than it was in May, the spillover implications are quite manageable, and there is no seemingly eurozone-wide crisis of confidence in the banking system1.

No one really doubts that the EU/IMF would have the resources to provide financial assistance to Portugal and Ireland, too, if necessary. The only real issue would be under what conditions such hypothetical assistance would be provided. There are likely several reasons for this development. First, a lot of bad political and economic news has emanated from the periphery in recent weeks. Irish bonds are now subject to higher margin calls by clearing houses. In addition the markets have been rattled by the Irish banking mess, the potential impact of a likely decline in prices of Irish residential housing, and concerns over the ability of the Irish and Portuguese governments to pass and implement new austerity budgets in parliament. It has hardly helped that Greece is beset by new revelations that it is beginning to lag behind in its IMF program with both higher deficits than initially thought in 2009 and lower revenues than expected in 2010. Such bad news alone would have caused peripheral spreads to spike.

Moreover, the slow uptick seen in figure 1 in Italian and Spanish yields over the last couple of weeks are likely caused by poor domestic news in those countries, too. The Berlusconi government in Italy looks increasingly fractured and paralyzed, the consolidation of the Spanish savings banks in the Caja-sector is falling behind, and Spanish GDP stalled in Q3 of this year.

It is also clear that eurozone bond markets are increasingly taking seriously the Franco-German proposal for "private sector participation" in a future European Crisis Resolution Mechanism (ECRM)—that is, haircuts for creditors in future EU sovereign rescues. That is a good thing. As this principle is evaluated by the markets and others, however, the devil looms increasingly large in details that are not yet clear. Financial markets typically react adversely to the lack of information on things they take seriously.

Mark-to-market logic leads to "worst case scenario pricing" and a likely overreaction in the case of peripheral eurozone bond markets right now. Despite the worst fears of the markets, the ultimate outcome of a crisis resolution mechanism will likely not be an imposition of a draconian "Argentinean solution" on bondholders.

Correspondingly, the statement by the finance ministers of France, Germany, Italy, Spain, and Britain at the G-20 meeting in October as they sought to clarify important details about the potential scope of an ECRM was important in eliminating a lot of potential downside risk for sovereign debt investors in the eurozone. In what amounted to the functional equivalent of a "verbal bailout" of Ireland, they stated:

"Whatever the debate within the euro area about the future permanent crisis resolution mechanism, and the potential for private-sector involvement in that mechanism, we are clear that this does not apply to any outstanding debt and any programme under current instruments. Any new mechanism would only come into effect after mid-2013 with no impact whatsoever on the current arrangements. The EFSF [European Financial Stability Facility] is already established and its activation does not require private sector involvement."2

An ECRM will therefore be only forward-looking, covering debt issued only after 2013.

At the same time, the very substantial market effect of this proposal (see figure 1) illustrates once again how the lack of proper communication between eurozone political leaders and financial markets result in extreme volatility. Obviously, this type of information providing substantial "downside insurance" to market participants should have been made available to financial markets in an unambiguous form at the time of the EU Council call for treaty changes in late October. The fact that it was not suggests continued poor understanding of the "real-time nature" of today's financial markets among eurozone leaders. Such "clueless" Franco-German policymaking is a source of some concern.

This week's communication failures should illustrate that eurozone policymakers cannot make open-ended and potentially far-reaching announcements about sovereign bond markets without clearly specifying the limit of the potential outcomes of their proposal. There should have been a more effective ban on discussion of pre-announcement policy discussions, to avoid markets reacting to misinformation. Policymakers should keep their mouths shut until such agreement exists, though one has to admit that the prospect of everyone exercising that level of discipline is limited.

Despite the problems of markets overreacting, the timing of the discussion about an ECRM precipitated by the Deauville Declaration remains right. As repeated interstate intra-eurozone sovereign bailouts are not politically sustainable, the discussion about the permanent post-EFSF regime must happen soon, preferably well ahead of the expiration of the EFSF in May 2013.

Deciding at German insistence to bring this decision forward to the EU Council in December 2010, a move likely also precipitated by the German state election calendar beginning in March 2011, was not without risks, as illustrated this week. Yet, without having begun a discussion about the post-EFSF regime, any actual activation of the EFSF would always have entailed risks, as taxpayers and their parliamentary representatives remain wary of future bailouts.

The best—perhaps only—way to prevent such a situation from arising next time around is to use the current crisis to make the necessary changes and solidify future political support. With the ECRM discussion at least under way to include "private sector participation" in post-2013 bailouts, voters will be offered at least a long-term way out of the dilemma of having to shoulder the cost. This is progress, regretfully overshadowed by inept communication, but progress nonetheless.

As in other times in history, notably the moment when President Franklin Roosevelt transformed the world of finance as he took office in 1933, the only thing we have to fear [from the ECRM] is fear itself—nameless, unreasoning, unjustified terror (of never materializing worst-case haircut scenarios) that paralyzes needed efforts to convert retreat into advance.

1. This is not to say that the eurozone banking system is well capitalized or even just healthy. It is not, but it is not facing imminent collapse either and does not threaten the solvency of sovereigns outside the periphery (and Ireland in particular).

A Spate of Recent Positive Events in the Euro Area

Is the Risk Free Status of Euro Area Sovereign Debt in Tatters?

The Rewards of Brinkmanship in Europe