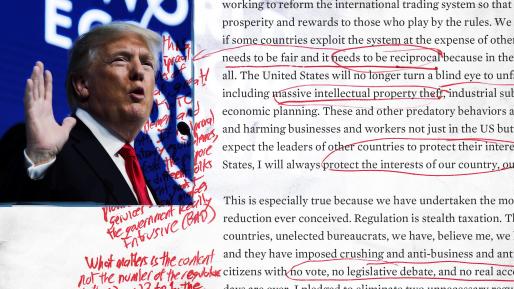 President Trump delivered his highly anticipated speech at the World Economic Forum in Davos, Switzerland on January 26, with high praise for America's growth since he was elected: "America is open for business and we are competitive once again." He also spoke on his international trade strategy, assuring the crowd of global business leaders that "America first does not mean America alone."

What is notable about President Trump's speech is what was not said, rather than what was said. It was promising to see he did not repeat attacks on the international economic system or individual trading partners, but the speech was a missed opportunity to present specific goals on how countries could work together for shared prosperity. Click on the notes to zoom in, then hit your browser's back button to return.

A FUTURE IN WHICH EVERYONE CAN PROSPER

[Good to see others' growth and prosperity characterized as welcome (as it should be)—not as a threat.]

[Untrue. US economy has been creating jobs and growing strongly for the last several years]

Trump is taking credit for current economic conditions by making false claims about what preceded his election to office. US job growth and GDP have been steadily climbing since 2010. And it's misleading for any president to claim responsibility for economic conditions in his or her first year, unless he/she provokes a crisis.

THE RESURGENCE OF A STRONG AND PROSPEROUS AMERICA

[Sounds like a Prime Minister of a liberalizing Latin American or Eastern European country—or a US State Governor—"Notice me! Come here!" Small time transactional view, not worth the President of the US going to Davos to say.]

This is a very limited transactional view of international economics. Such drumming up of business is beneath the position of the President of the United States, and a waste of this forum. The country has been open for trade and investment since the aftermath of World War II, when it helped build the entire global, rules-based economic order that contributed much more than simple "sales figures," preventing destructive trade wars (let alone physical conflict). The agendas for international cooperation proposed in previous Davos keynote speeches by German Chancellor Merkel in 2015 and by Chinese President Xi last year had much more substantive goals, like the Transatlantic Trade and Investment Partnership to set global rules or a new round of inclusive trade and growth for development.

[The characterization of the tax cuts overstates the 'reform' attributes, and understates the temporary aspect of cuts for working families (and their losses of government services)]

The congressional Joint Committee on Taxation (JCT) finds that the recently passed tax cuts would disproportionally benefit higher income households by 2021, and by 2027, there would be tax increases for all households under $75,000 but modest cuts for households making $100,000 or more.

[Uh, no. Control for year-end as strong growth, not that unusual. May come, but not yet versus benchmarks (for wage growth).]

It is too soon to tell whether tax cuts have resulted in wage increases since any gains so far may be due to strong business growth.

[Actually misrepresents an achievement of the tax package forcing multinationals to shift profits back to US. Good, but not about US being more attractive.]

THE MOST EXTENSIVE REGULATORY REDUCTION

[What matters is the content not the number of the regulations. Whether 2 or 22 to 1, the effect depends on the kind of regulation—so some reduction in compliance for banks, okay; reduction in environmental regs, good for short-term growth, bad for long-term health & wealth; reduction in protection for workers' and consumers' claims against companies, bad.]

I WILL ALWAYS PUT AMERICA FIRST

[And when the world grows, so does America, as we see happening now.]

WE SUPPORT FREE TRADE, BUT IT NEEDS TO BE FAIR AND RECIPROCAL

[What does this mean?? If reciprocal means same rules of behavior for all, great! → then support WTO dispute settlement and enforcement. If reciprocal means arbitrary equivalences, then it defeats the purpose of trade—different folks produce different goods & services—and makes the government really intrusive (BAD)]

Reciprocity in trade is a meaningless concept. Either it means everybody should behave under the same rules, which is what we have now, or it means forcing trade accounts into some form of government ordered arbitrary balance, which is harmful and defeats the purpose of market-based trade.

[This is the most important issue, the most valid complaint against China. (Right to clearly indicate it's China without name-calling btw). This should be shared by all countries—let's work together, not rely on just the US playing vigilante.]

[US set up the international system to advance our interests. The US isn't exploited by the system.]

For example, recent trade deals have involved much bigger tariff cuts by US trading partners than by the United States.

[Yes. That is why the US joined the TPP negotiations in the first place. Much more efficient, much more consistent, and much more powerful effect on others if you negotiate group deals. DUH.]

The United States is already losing out from dropping out of the Trans-Pacific Partnership (TPP) because those countries are moving ahead with a revised pact without us.

BEST COLLEGES AND UNIVERSITIES IN THE WORLD

[One can spend too much or on the wrong things, though. Like with regulation, military spending is about quality not quantity.]

[Combined with training to get the best paycheck and safety net so a sudden accident or health issue doesn't take it all away. That's the best, and what every rich country except the US provides its citizens.]

WE ARE ALL STRONGER

[Great! So what should we cooperate on? Merkel and Xi gave their proposals when they spoke at Davos in previous years.

Notes have been edited to fit the screen. Here is the fully annotated document from Adam Posen. Follow @AdamPosen on Twitter.

American Exceptionalism: Time for New Thinking on Economics and Security

Assessing the Strategic and Economic Dialogue