Slovakia is scheduled to take over the rotating presidency of the European Council in July 2016. Yet the results of elections held on March 5 show that Slovak society is divided on the future of Europe, with three anti-establishment parties crossing the threshold required to obtain seats in the national parliament. Europe is in for a rocky presidency.

Eight parties crossed the electoral cutoff, by receiving at least 5 percent of the votes cast. The most popular party (Prime Minister Robert Fico’s Social Democracy party, which had governed with a comfortable majority in the preceding four years) has only 49 seats. It is trailed by a surging euroskeptics’ party.

Voters are dissatisfied with the outgoing government, which carried out few economic reforms and turned increasingly to larger public expenditures, such as free public transportation for students and seniors, to attract support. Although living standards in Slovakia are improving, average annual wages of about €12,000 compare unfavorably to neighboring Austria’s nearly €40,000. (After adjusting for price differences, Slovaks still earn less than 50 percent of what Austrians do.) Employment opportunities are scarce in some regions, and unemployment is falling more slowly than in other Central European countries (figure 1). 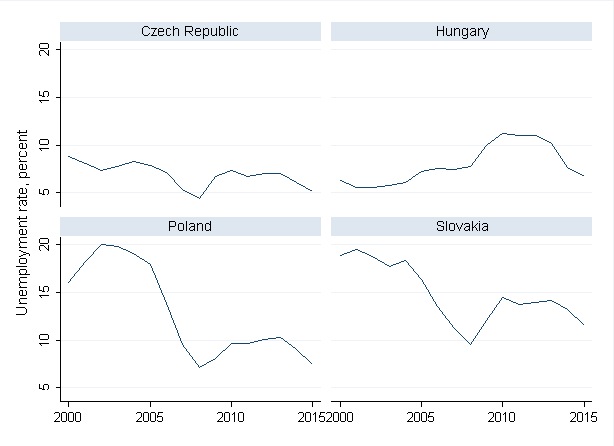 Other than unemployment and poor public services, the biggest electoral issue is dissatisfaction with Europe. Slovakia reaps large monetary benefits from its membership in the European Union, yet anti-Brussels rhetoric proved effective throughout the electoral campaign. Several parties courted voters with anti-EU messages. Nearly seven in ten Slovaks trusted the European Commission in 2010, but only 46 percent held a favorable opinion of the Commission when surveyed in 2015. Trust in the European Parliament has fallen by 20 percentage points compared to 2004 when Slovakia and nine other nations joined the European Union.

In recent months, the European Union has been associated with “refugee redistribution by quotas,” a plan proposed last September by European Commission President Jean-Claude Juncker to assign refugees to some countries that do not attract as much migrant inflow from the Middle East and North Africa.1 Instead, Slovaks generally consider the migration crisis as an opportunity to mobilize European resources to strengthen the external border, starting with boosting Frontex, the agency that coordinates European border management. At just over €140 million, European spending on border control corresponded to about 0.5 percent of what the US government spent on external border protection in 2015.

South of Slovakia, Hungarian Prime Minister Viktor Orbán remains the most decorated Central European politician, having won the premiership three times.2 With several Slovak parties taking a page out of Orbán’s anti-EU manual, the next Slovak government will likely bolster Orbán’s view that smaller European countries, particularly the new member states in the east, must fend for themselves against harmful EU policies. In this respect, Slovakia may join Poland, another recent convert to Orbán’s views.

Brexit: Everyone Loses, but Britain Loses the Most