Is Italy Europe’s Next Big Worry?

Despite the prospects of a good year economically and politically for the euro area in 2017, uncertainty hangs on the horizon over Italy. Once the French election in May is over, investors' attention will likely turn to Italy, where an election is due no later than May 2018. But the country may not be capable of forming a new viable government in an uncertain economic environment: With a recovering euro area economy, the European Central Bank (ECB) may reduce its asset purchases to zero in 2018, driving up Italian (and Portuguese) bond yields and spreads.

If that happens, ECB President Mario Draghi and his governing council will be torn between pressure to resist doing Rome any favors and the need to stabilize the third largest euro area economy.

Italy's governing Democratic Party (PD) recently split and is currently engaged in a potentially messy election for its next leader. The party will not likely push for early elections in 2017 because polls show rising anti-establishment sentiment. A dissident majority consisting of the Five Star movement (MS5), Forza Italia, and the Northern League (Liga Nord) could emerge from the mix. Recent Italian opinion polls show the level of support for these parties remains relatively stable (see figure below). 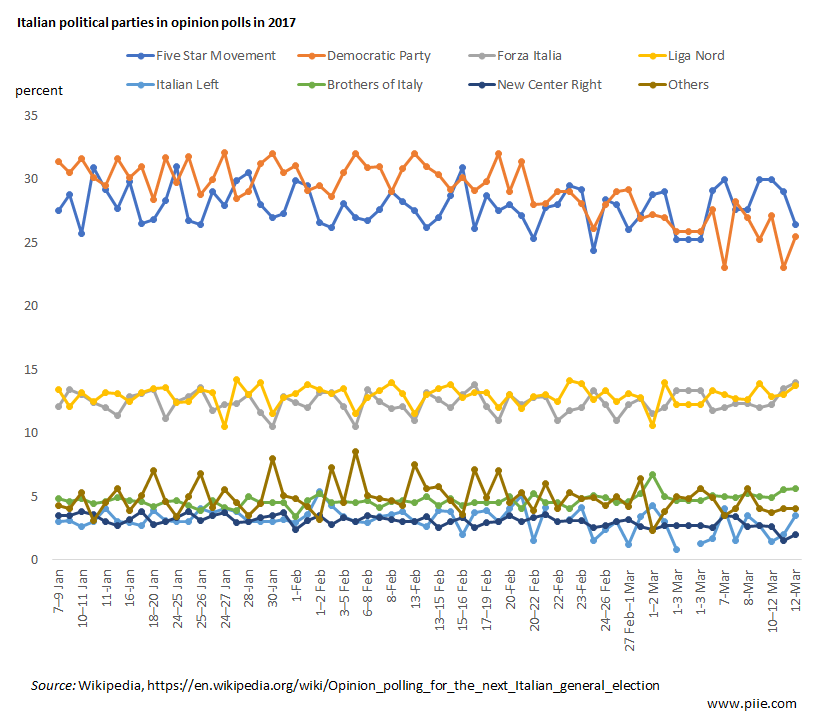 MS5 and PD are tied for first position at around 25 to30 percent, Forza Italia and the Northern League poll at around 12 percent, while a host of other parties have the support of less than 5 percent of the vote.

It seems unlikely that MS5 could reach a governing compact with either Forza Italia or Liga Nord. But support for the euro by MS5 and Forza Italia is ambiguous, while Liga Nord is virulently against the common currency, raising doubts about any new parliament’s commitment to it. Moreover, if such a crisis comes quickly after an election giving the combination of MS5, Forza Italia, and Liga Nord a majority, immediate parliamentary support for another technocratic government seems unlikely, removing one of Italian democracy’s preferred crisis management mechanisms. Prolonged political stalemate may aggravate market concerns over Italy.

Will Italy take the euro area back to the dark days of the euro crisis in 2010–12, as Greece did in that period?

Were that to happen, Italy may in theory have to accept an economic reform program in 2018–19 posed by the “troika” of the ECB, the European Commission, and the International Monetary Fund. On the other hand, unlike the situation in 2010–12, Europe possesses institutions to address market concerns over a country as large as Italy.

Italy, in the final analysis, is not Greece. It has a high level of gross government debt at 133 percent of GDP but also a primary surplus of 1.7 percent of GDP in 2016 (among the highest in the euro area), suggesting that it does not need a massive austerity drive. Also helpful is the fact that Italy is projected to have among the lowest future increases in pension and healthcare expenditures among advanced economies with an aging population. By contrast, Greece had a primary deficit of more than 10 percent of GDP primary deficit in 2009 and an enormous pension burden.

Any policy conditionality Europe might impose on Italy would likely aim at much needed pro-growth liberalizing reforms, removing protections from cosseted insiders and no doubt stirring fierce political opposition. Yet such reforms need not cause a deep recession. Indeed they would create new opportunities for many Italians. The domestic political economy in a future crisis is hence less predictable than often assumed.

The euro area’s emergency lending tools, which did not exist in 2010–12, consists of an operational European Stability Mechanism (ESM) and a legally secure Outright Monetary Transaction (OMT) bond purchasing program administered by the ECB. With or without the IMF, using these tools would pose political challenges for all sides. But as France and Germany are overwhelmingly poised to follow the Netherlands and install pro-EU governments, the difficulties outside Italy seem manageable.

If market turbulence unfolds, the question remains whether a majority in Italy’s parliament would go along with reforms in exchange for financial assistance from the rest of the euro area. Or would anti-euro sentiment strengthen in Italy?

Greece’s experience suggests that existential crises increase support for the euro, which has risen from the lowest in the euro area to nearly 70 percent today, according to Eurobarometer polls. The same surge would likely occur in Italy. Were the Italian government to leave the euro, its debt held by Italian banks and other financial institutions would collapse, jeopardizing the bank deposits of Italian citizens. Overall almost two thirds of Italian government debt—62 percent and almost €1.2 trillion in outstanding debt—is held by domestic investors, who would lose their shirts if Italy returned to a feeble lira or if the government attempted to restructure Italian outstanding debt while still inside the euro area. The situation may have to become rocky before Italy finds the necessary political will to reform, but the most likely scenario would be for it—like Greece—to step back from the edge of the abyss and remain tied to the euro.

Italy Heads for Confrontation with Itself, Financial Markets, and Europe