Enactment of the North America Free Trade Agreement (NAFTA) 20 years ago was accompanied by dire predictions that an increase in US investment in Mexico would lead to job losses and investment reduction at home. The rhetorical highpoint for this concern was captured by H. Ross Perot's assertion in the 1992 presidential campaign that NAFTA would create a "giant sucking sound" as US jobs and investors rushed south of the border.

But that warning overlooked the possibility that foreign direct investment (FDI) and job creation abroad are complements to investment and job creation at home, that offshoring strengthens the competitiveness of the US outward investor (leading to both substitution for and enhancement of home country economic activity), and that the complementary effects may be even greater than the substitution effects.

This essay builds on our recent PIIE Policy Brief The US Manufacturing Base: Four Signs of Strength, which presents empirical evidence that increased offshoring by US manufacturing multinational corporations (MNCs)—a phenomenon criticized as contributing to domestic job losses—is actually associated with overall greater investment and increases in jobs at home. This update focuses on the subset of US firms that offshore to Mexico. We find that they, too, use their foreign activities to complement, and not just substitute for, their employment, sales, investment, and exports in the United States, with the net result not a loss but an increase in jobs and investment at home that can be directly linked to investment abroad.

Profile of US Direct Investment in Mexico

In 2012, Mexico was only the 23rd largest recipient of FDI worldwide, but it was the 11th largest destination for investment by US firms. In 2011 (the most recent year for which detailed data are available), affiliates of US firms in Mexico sold $252 billion of goods and services, and employed 1.3 million Mexican workers. 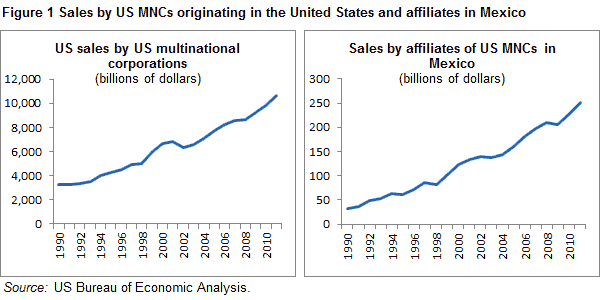 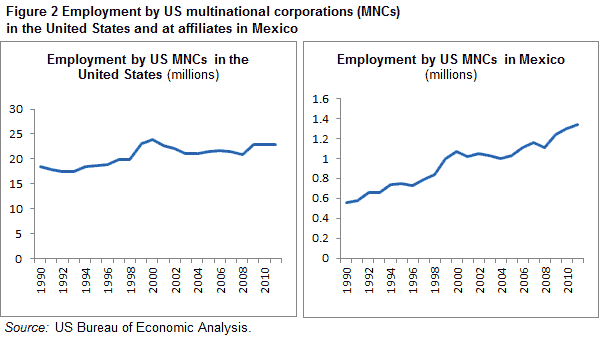 Trade between US MNCs and their affiliates in Mexico has also grown since the signing of NAFTA. Trade in both directions increased rapidly in the second half of the 1990s, and was close to being balanced during that period. In the early 2000s, US MNCs imported more from their affiliates in Mexico than they exported to them, though the trade gap began to narrow in 2008. 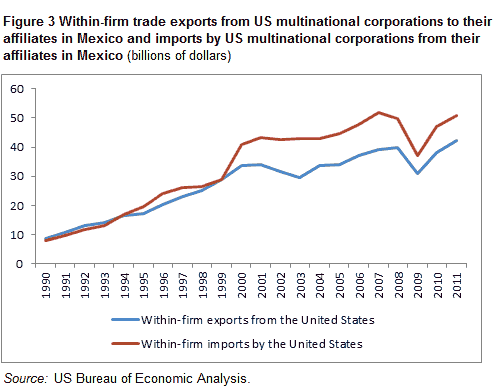 US firms with affiliates in Mexico operate in a variety of different industries. Not surprisingly, given the extent of offshoring by US auto companies, the largest of these is transportation equipment, which includes automobile manufacturing. Table 1 provides details on the 15 largest industries, ranked by the number of workers employed by US MNCs in Mexico in 2011.

What Happens to US Firms' Domestic Operations When They Invest Abroad: The Case of NAFTA?

Figures 1–3 show that investment by US MNCs in Mexico has increased since the signing of NAFTA. But has this expansion come at the expense of investment and employment in the United States? To disentangle the extent to which MNC activity at home and abroad are substitutes or complements, we examine detailed microdata on how individual firms behave over time. The US Bureau of Economic Analysis (BEA) collects confidential firm-level data on the activities of US-owned multinationals, both at home and at their foreign affiliates. All US-owned firms with at least one foreign affiliate that meet a minimum threshold by size are required by law to provide this data to the BEA. These data allow us to examine what happens to domestic employment, sales, capital investment, and exports in the United States when an individual firm expands its FDI activities. Obviously many other factors such as recessions, industry trends, and idiosyncratic firm decisions will also affect the domestic operations of US firms. For this reason, we employ panel regression methods that allow us to control for those factors and isolate the direct relationship between foreign expansion and domestic outcomes at US firms.

These methods use data on all US MNCs with foreign affiliates in Mexico. We include firm fixed effects, which allow us to examine changes within each firm over time, rather than comparing one firm to another. Firm "fixed effects" hold constant everything that is unique about a given firm, isolating how its employment in the United States and the other variables we examine change when the firm increases its outward FDI. Thus all the characteristics that define a given firm—such as the industry it operates in, its size, its relative market power, etc.—are controlled for, allowing us to focus only on the relationship between offshoring and the domestic activities of US firms.

We also include year fixed effects, a technique that controls for the potential impact of recessions and booms (controlling for such impacts is particularly important in light of the severe Mexican currency crisis shortly after NAFTA was signed). Just as firm fixed effects hold constant firm characteristics, year fixed effects hold constant everything external to the firm that was going on in a given year. The only way to truly identify a causal effect between foreign and domestic activity would be to randomly assign some US firms to become multinationals, while forcing others to remain purely domestic. This type of pure experiment is neither possible nor desirable. Using the fixed effects methodology is the next best option, however. This approach controls for everything that is unique about a given firm and looks at changes within each firm over time, rather than drawing conclusions based on observed behaviors across very different firms.

Figure 4 summarizes the relationship between US MNC activities at home and in Mexico. These results draw on firm level data from 1990 through 2009, covering hundreds of US MNCs and their more than 1,000 affiliates in Mexico. 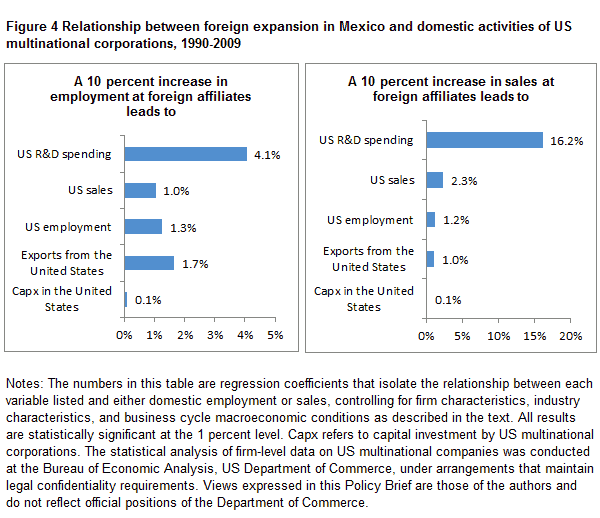 To explain the results from figure 4 more specifically, consider that the average US firm in the sample employs 25,642 workers in the United States and 1,311 workers in Mexico. Thus a 10 percent increase in employment at affiliates of US firms in Mexico would correspond to about 131 jobs in Mexico. Using the employment numbers from the left panel of figure 4, this increase would be associated with a 1.3 percent increase in employment per MNC in the United States, or 333 US jobs per firm. Accordingly, for the average US firm, adding 131 jobs in Mexico would create 333 new jobs in the United States at that same firm. These relationships may be hidden by other simultaneous trends, including economic downturns, US economic growth, or developments within a given industry. That is, without the benefit of econometric analysis such as ours, these relationships may be hidden within the aggregate data. But it is clear from these results that any fall in US employment by US MNCs is not due to offshoring to Mexico, as this offshoring exerts a net positive force on the domestic operations of US firms.

These findings do not mean that certain aspects of overseas expansion never diminish similar aspects of home country MNC activity. Quite the contrary, the spread of investment and R&D, like trade in general, is likely to result in reshuffling economic activity within and among the United States, Mexico, and Canada and within and among sectors in each country. The point is that a dispassionate public policy analyst would have to conclude that the aggregate result from outward FDI on the part of US firms after NAFTA is strongly positive. Conversely, the overall consequences would be less activity at home—not more activity at home—if overseas operations of US MNCs had not been able to take advantage of NAFTA.

A case study illustrates this point. One of the best-selling and most successful trucks in the world has been Ford's F-150 series. Following the completion of NAFTA, Ford redesigned the F-150 line, making the Ford Essex engine plant in Windsor, Canada, the exclusive source of the 5.4 liter, 32-valve high-performance Triton V-8 engine, and choosing Ford's contract manufacturer, IMMSA of Monterrey, Mexico, as the sole supplier of the M450 chassis, using inexpensive but reliable Mexican steel alloy.

Ford's prospects for holding its share of the truck market in subsequent years vis-à-vis the Toyota Tacoma and the Isuzu DMax, not to mention the Chrysler Dodge Ram, depend upon this NAFTA-integrated supply chain. Recently, the United Auto Workers' called for NAFTA to be "renegotiated to fix the many problems with this agreement and to stop the outsourcing of good-paying manufacturing jobs to Mexico." 1 However, the competitive fate of UAW workers at Ford's US assembly facilities actually depends on NAFTA.

Other previous studies have found results that tell a similar story. Mihir A. Desai, C. Fritz Foley, and James R. Hines (2009) use firm-level data from 1982 to 2004 to show that growth in employment, compensation, fixed assets, and property, plant and equipment at foreign affiliates of US firms is associated with US domestic growth in these same measures. (Similarly, Lee Branstetter and Foley [2010] find that US firms that invest in China simultaneously invest more in the US home market as well.)

Overall the evidence paints a picture in which outward investment is an integral part of MNC strategy to maximize the competitive position of the whole corporation, a goal for which headquarters raises the needed amount of capital from sources all around the globe. In determining where to deploy capital and where to locate production, relative costs—including relative wages and benefits (and well as relative skills and relative productivity)—play a role. But in the end, operations at home and operations abroad complement each other as the MNC parent tries to make the deployment of tangible and intangible assets most productive and most profitable.

Fears that expansion abroad may lead to contraction at home have been raised in discussions of trade agreements now on the US agenda, particularly the Trans Pacific Partnership (TPP) and the Transatlantic Trade and Investment Partnership (TTIP). But the strong complementary relationship revealed here—and in other similarly rigorous studies—means that firms, workers, and communities will likely be net beneficiaries of such market-opening and investment-widening agreements.

Branstetter, Lee, and C. Fritz Foley. 2010. Facts and Fallacies about US FDI in China (with apologies to Rob Feenstra). In China's Growing Role in World Trade, ed. Robert C. Feenstra and Shang-Jin Wei. Chicago: University of Chicago Press in association with the National Bureau of Economic Research.

1. The quotation comes from the UAW website. Ford's decision to shift from steel to aluminum for the F-150 will involve a new configuration in source of inputs. Available at http://www.uaw.org/ (accessed on July 2, 2014).

Streamlining Rules of Origin in NAFTA