Microbes do not recognize national borders. For that reason, infectious disease is an example par excellence of a threat requiring intergovernmental cooperation. In a welcome communiqué, G20 leaders have called for greater international collaboration on the public health response to COVID-19. But this commitment lacked the necessary detail to trigger fast concrete actions and provide guidance and reassurance for citizens. Instead, the leaders tasked health minsters to develop "urgent actions" by April 19-20, 2020. As the virus continues to spread, posing particular dangers to ill-equipped poorer countries, the ministers should quickly adopt specific, coordinated, and comprehensive steps in two categories:

As the G20 countries implement public health responses and undertake unprecedented fiscal and monetary support for their own economies, it is important that they keep in sight two vital principles of international cooperation: (1) invest in areas where international synergies amplify benefits and (2) avoid self-interested actions that are collectively harmful when pursued by all.

Since 1948, the main locus for international cooperation in public health has been the World Health Organization (WHO). The G20's March 26 communiqué rightly commits to "strengthen[ing] the WHO's mandate in coordinating the international fight against the pandemic." One avenue would be through an immediate increase in funding. The WHO's program budget for 2020–21 is $4.8 billion, of which a large majority consists of voluntary contributions from private as well as official donors that often are earmarked for specific uses. G20 countries should call for an immediate increase in assessed, and thus unrestricted, contributions from member governments. Even a $1.5 billion increase would better than double the WHO's unrestricted funding. Scaling up the WHO's Global Outbreak Alert and Response Network (GOARN) should be a priority, and G20 countries should additionally commit specific sums to the WHO's COVID-19 Solidarity Response Fund.

Rapid development of vaccines, antiviral treatments, and diagnostic tools will be key to an effective global response. Support for key NGOs and public-private partnerships such as Gavi, the Vaccine Alliance, and the Coalition for Epidemic Preparedness and Innovation (CEPI) can accelerate the development of pharmaceutical interventions, which is ideally pursued along parallel tracks using diverse approaches, with full sharing of research results in real time. Here too, specific government funding commitments are necessary, as well as government guidance to private industry on public health priorities and attention to assuring that the production and distribution of future vaccines worldwide will be rapid, efficient, broad, and affordable.

In 2005, 196 countries, including all WHO member states, agreed to binding International Health Regulations (IHRs) governing national commitments on core health capacity, disease-related restrictions on trade and travel, and outbreak reporting. Some of these rules aim to discourage countries, for example, from delaying reporting disease outbreaks for fear of becoming the target of medically unnecessary travel restrictions. IHRs have been imperfectly implemented over the years, however, including the recent free-for-all approach to travel restrictions, and the G20 communiqué rightly acknowledges the need for "full implementation" of the IHRs. That goal will require heightened multilateral consultation, monitoring, enforcement, and technical assistance.

The COVID-19 pandemic caught countries dramatically unprepared in terms of medical equipment—ranging from protective gear to testing kits to ventilators—as well as surge hospital capacity. One counterproductive aspect of the recent crisis response has been the use of export restrictions on medical equipment by some countries. Such restrictions can reduce the availability of equipment even in the exporting countries. Moreover, export restrictions make it less profitable for suppliers to expand production to meet evolving world demands, thereby hampering the global response to the pandemic and costing lives. The G20 should oppose them. Perversely, numerous countries including the United States still maintain tariffs or nontariff barriers for imports of products critical to fight the disease, such as soap, disinfectants, and medical equipment. Removing these trade barriers would not only help the importing countries counter COVID-19 more effectively but also keep global production and supply chains for these products moving more efficiently.

It is clearly critical for countries everywhere to ramp up production of medical inputs, as the G20 has urged, and to coordinate those efforts through the WHO. In reality, though, while some medical gear can be produced anywhere, different countries have different comparative advantages in some links of the medical supply chain, so international collaboration and information exchange to identify and eliminate key bottlenecks can benefit everyone. The G20 should commit to strengthening the WHO's Pandemic Supply Chain Network, which could help to avoid shortages of key products and inputs, for example, the reagents needed to isolate the RNA of the SARS-CoV-2 virus causing COVID-19, ventilator components, and antiviral drugs.

While advanced economies can slow virus spread by practicing social distancing, the luxury of this approach is unavailable to the majority in poorer countries. Even regular handwashing is more difficult when running water is not easily available. We can therefore expect COVID-19 to very soon have especially devastating effects in poorer countries. The figure suggests how much scope there is for COVID-19 cases to balloon in relatively poor countries, including many of the poorest located in sub-Saharan Africa. 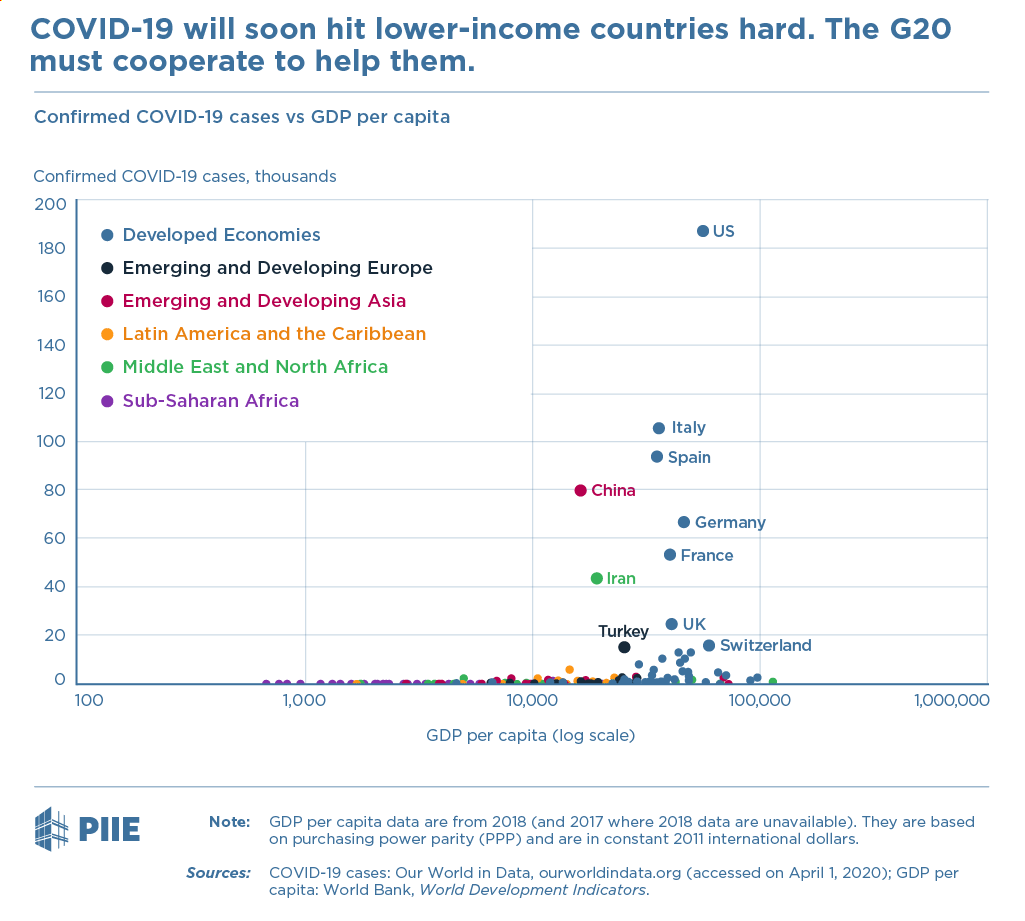 The pandemic threat will remain active throughout the world until the virus is contained everywhere, so even apart from humanitarian concerns, it is in the interest of richer countries to channel resources to help poorer countries control and treat the disease. Moreover, twin health and economic disasters could trigger outward migrations from lower-income countries on a biblical scale.

An obvious first step is for the G20 to endorse the International Monetary Fund (IMF) and World Bank calls to suspend the poorest countries' debt payments to official creditors. But even this action will not be nearly enough. The G20 should call for full funding of the WHO's Contingency Fund for Emergencies (CFE) and, indeed, for the CFE's augmentation beyond the current $100 million aspiration. The UN's Central Emergency Relief Fund (CERF) is another mechanism for quickly getting resources to pandemic-stricken nations, but it has struggled to come close to its annual donor funding target of $1 billion. Even that sum is inadequate in the current crisis, and the G20 should underwrite a higher level of sustainable funding. Countries should also support the IMF's Catastrophe and Containment Relief Trust, established in 2015 to address the Ebola outbreak.

In addition to calling for permanent augmentation of these various standing sources of support for emerging-market and developing economies, the G20 should coordinate exceptional pandemic support in a way that ensures the right resources flow to the areas of greatest need. Existing bilateral commitments in the health field could be consolidated and, in some cases, repurposed for COVID-19 containment and treatment at the same time that wealthier countries pledge new resources for the current health crisis. The Global Fund to Fight AIDS, Tuberculosis, and Malaria has proven to be a highly effective financing instrument with broad experience since 2002 in funding prevention, treatment, and care in low- and middle-income countries. Countries in emerging Europe, South America, Africa, and Asia are already using Global Fund resources to fight COVID-19, but the available resources need to be levered up dramatically. Particularly in sub-Saharan Africa, the comorbidity of COVID with AIDS or tuberculosis is likely to be especially lethal. The UN COVID-19 Response and Recovery Fund, established at the end of March 2020, is a new funding instrument with a wide remit covering not only pandemic response but also broader strengthening of social infrastructure and safety nets.

Looking a bit farther down the line, mechanisms should be put in place to finance the large-scale rapid distribution of vaccines and treatments to poorer countries.

Absent generous aid from higher-income countries to mitigate the health crisis, restructuring of some private debts is likely in the cards, with creditor-country central banks and regulators moving to limit any financial fallout.

While the origin of the current COVID-19 crisis is uncertain, the evidence is clear that zoonotic transmission has been involved in several pandemics. As experts have advocated, the G20 should call on all countries to outlaw trade in and consumption of wild animals and, if they have already done so, to enforce their laws rigorously. Of course, even eliminating this risk factor will leave the possibility of other naturally occurring as well as manufactured microbial threats.

Need for a Post-Mortem

The global public health system failed to produce a globally successful coordinated response to the outbreak of COVID-19. Much fault lies with individual governments, but the failure also reflects mechanisms of international coordination that, in retrospect, appear too weak. A key task for the postcrisis period is a detailed international study of weaknesses in country responses, as well as the modes of response that were most successful. Also necessary is an evaluation of ways in which international cooperation failed. Only with this knowledge can countries come to a common understanding of best practice, without which coordinated action will continue to prove challenging.

In a well-known study of about three decades ago, economist Richard N. Cooper contrasted the evolution of international public health cooperation, which he judged as a success, with the prospects for macroeconomic policy cooperation, which he judged to be less favorable. He argued that whereas macroeconomists fundamentally disagreed on both policy effects and objectives, public health cooperation had the benefit of scientific consensus on the causes and treatment of diseases. As he put it: "[I]nternational consensus about practical knowledge, along with shared objectives, is a necessary condition for close international cooperation."

That consensus has been lacking in the recent crisis and has contributed to halting and sometimes nationalistic responses. Although novel microbes may challenge scientific consensus beyond the better known scourges (such as cholera, plague, and smallpox) that public health initiatives have successfully controlled in the past, the current experience will yield a rich dataset—with variation not only across but also within countries—on what policy approaches have been most useful and at what economic cost. Once infection and antibody tests become more widely available, random population testing can not only limit contagion but also provide valuable supporting data for retrospective analysis. Such a research effort, endorsed by the G20, can form a strong basis for a future consensus on best practice—a consensus that can support international cooperation when future microbial threats emerge.

And it is perfectly foreseeable that they will; indeed, many predicted something like the current outbreak. To take one example, the WHO/World Bank Global Preparedness Monitoring Board (GPMB) warned in their September 2019 inaugural annual report:

High-impact respiratory pathogens, such as an especially deadly strain of influenza, pose particular global risks in the modern age. The pathogens are spread via respiratory droplets; they can infect a large number of people very quickly and with today's transportation infrastructure, move rapidly across multiple geographies.

Sadly, the few weeks between this warning and the emergence of the SARS-CoV-2 virus were insufficient for progress on the GPMB's recommendations for enhanced global cooperation. The G20 now has the opportunity to advance that agenda, while also creating a more extensive base of knowledge to support future cooperation.

More from this series 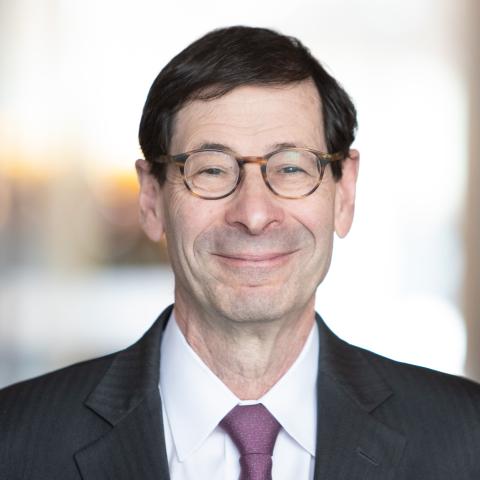 Current vaccine proposals are not enough to end the pandemic