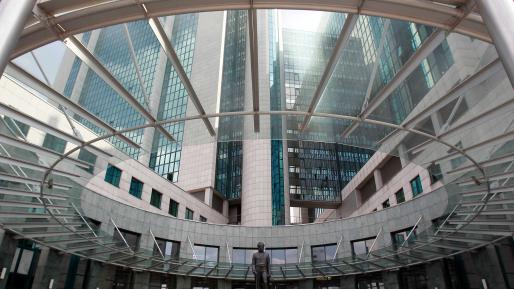 The European Union (EU) had a vigorous early response to Vladimir Putin's aggression in Ukraine, aimed at disrupting Russia's financial system and economy. Ending EU imports of Russian hydrocarbons would be a powerful next step and is an absolute priority. But other actions can and should be taken now while an oil and gas ban is being debated. Specifically, the EU should extend harsh sanctions to most or all of the largest Russian banks, including the largest one that plays a central role in Russia's financial system, Sberbank. There is no good reason for the EU not to do so immediately.

On April 6, the United States Treasury announced full "blocking" sanctions on Sberbank and on Alfa-Bank, Russia's fourth-largest bank, meaning US entities cannot conduct any transactions with them, and their US assets are frozen. Together with previous actions announced on February 22 and February 24, this action largely or completely prevents six out of Russia's top 10 banks, representing more than 60 percent of total Russian banking assets, from conducting any transactions subject to US jurisdiction. While the United States could do even more, its actions are much more than equivalent EU actions. Of those same top 10 banks (leaving aside the Central Bank of Russia), the EU has blocked only four (not including Sberbank and Alfa-Bank), adding up to only a quarter of total Russian banking assets, as illustrated in the figure. 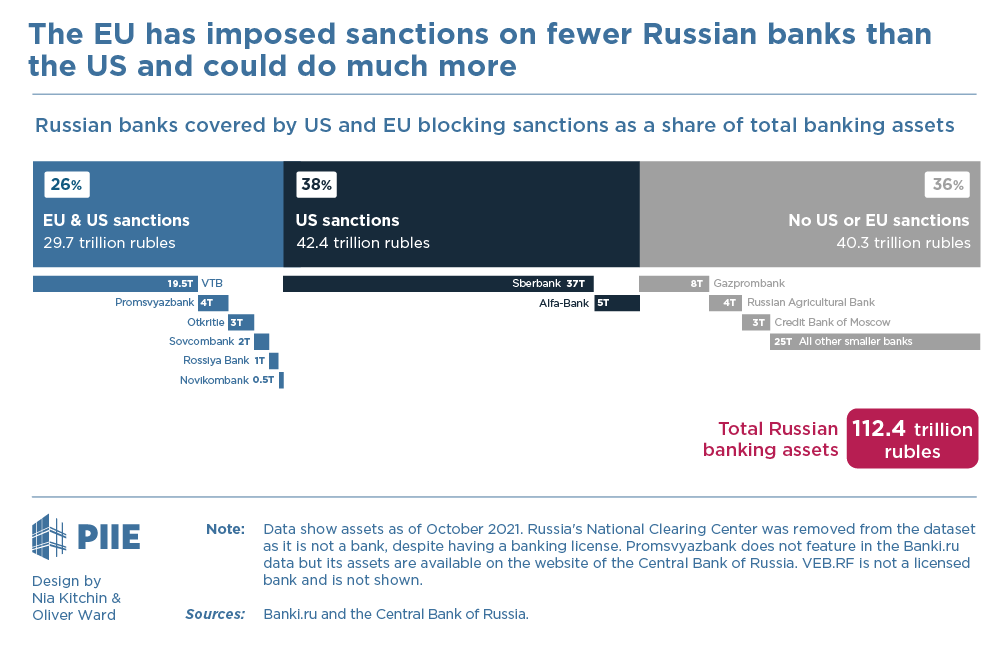 The notion of European timidity on banking sanctions may sound awkward, given how the EU has been rightly praised for its bold actions on the financial front, just two days after Russia's invasion of Ukraine on February 24. The sanctions on the Central Bank of Russia, applied by the EU together with the United States, the United Kingdom, Canada, Japan, and other jurisdictions, have shattered the myth of a financial "fortress Russia" and forced the central bank to raise policy rates and impose capital controls, with severe negative impact for Russian credit and growth prospects and notwithstanding Russia's single-minded effort to shore up the ruble.

When it comes to individual banks, however, the EU so far has concentrated its financial fire on only seven Russian financial institutions: VTB (Russia's second-largest bank by assets as of October 2021), Promsvyazbank (#6), Otkritie (#8), Sovcombank (#9), Rossiya Bank (#16), Novikombank (#24), and the investment company VEB.RF, which is not licensed as a bank but has assets that would place it in the top 10 if it were. Three of these were the targets of EU blocking sanctions on February 23, the day before the invasion. Then on March 1, the EU excluded all seven from access to SWIFT, the Belgium-based global payment messaging system. (Three Belarusian banks were added a week later.) Finally, on April 8, the remaining four also came under full blocking sanctions, which puts an end to a rather senseless loophole that allowed for the continuation of correspondent banking services without using SWIFT. These sanctions have been imposed by the entire EU (actually the European Economic Area), not just the euro area. But they leave the vast majority of Russia's banking system untouched.

Why has the EU been so cautious?

The initial round of sanctions on the central bank was without precedent for a country of Russia's size and systemic importance, and it may have been appropriate for the EU not to add further financial stress at the same time out of financial stability concerns. That motivation for prudence, however, no longer applies. The European Central Bank, in its role as euro area banking supervisor, has carefully monitored possible contagion channels and suggested, in a letter to European parliamentarians on April 6, that there is currently no reason for alarm from euro area banks' exposures to Russia. EU banks with large Russian operations have either signaled their forthcoming exit from the country, or in the case of Société Générale, announced it. All this considered, it does not appear that intensifying EU sanctions on individual Russian banks would materially threaten European financial stability.

The current EU stance of maintaining significant purchases of Russian oil and gas is not a reason to delay such intensification either. Put succinctly, EU buyers of Russian hydrocarbons do not need Sberbank to purchase the stuff. They can operate through a much narrower banking channel, either one Russian bank (large or small) that is left unsanctioned for that purpose, or even through a sanctioned bank using an authorized facility carved out of sanctions to allow oil and gas transactions. That bank may be Gazprombank (and/or its cousin the Russian Regional Development Bank, an affiliate of Rosneft), or another institution as may be deemed fit. Even assuming that some ongoing oil or gas supply contracts are currently serviced through Sberbank (or Alfa or another bank that has not yet been on the EU sanctions list), that banking relationship can presumably be switched to another institution without that constituting a breach of contract. Funnelling all energy sales through one approved banking facility (or a small number thereof) will have the added benefit of making monitoring of volumes easier across the EU, increasing the likelihood that member states will agree and adhere to reductions, if not the elimination of imports in the near future.

If the Russian authorities take that as a pretext to stop deliveries, so be it—but that risk exists no matter what, even though the late-March test of will over the separate issue of payment in rubles suggests it is rather low. In order to prevent humanitarian damage from the sanctions on banks, and to preempt Russian propaganda blaming the EU for imaginary such impact, the regime should include "humanitarian channels"—approved facilities set up to facilitate the sale of medicine, medical devices, and food- and agricultural-related goods from the EU to Russia. Additional channels could be provided for entities from non-EU countries to keep buying from Russia, even if the Russian bank involved in the transaction has been cut off from SWIFT; in that case, they would only need to use a different, presumably less efficient, messaging system.

Imposing blocking sanctions on Sberbank and the other large Russian banks currently left untouched by EU sanctions—namely Alfa-Bank, Russian Agricultural Bank, Credit Bank of Moscow, Bank Saint Petersburg, Tinkoff Bank, and more—may not dramatically change the environment of Russia's economy and would definitely be a less momentous decision than stopping EU oil and gas purchases from Russia. Even so, it would create pervasive impediments to hitherto unsanctioned international business for a wide range of economic actors in Russia and would also make it incrementally more difficult for Russian entities to circumvent some of the other sanctions already in place. Importantly, it can be done without delay, and at no major cost to the EU or like-minded countries. Given the atrocities committed by Russia and its disruption of Europe's fundamental security norms, there is much more risk in doing too little than in doing too much.

The latest Annual Report is now available in a digital format. Read about the Peterson Institute’s work in 2021 on the economics of the global pandemic, the United States and deglobalization, the Chinese economy, decarbonization, and more. 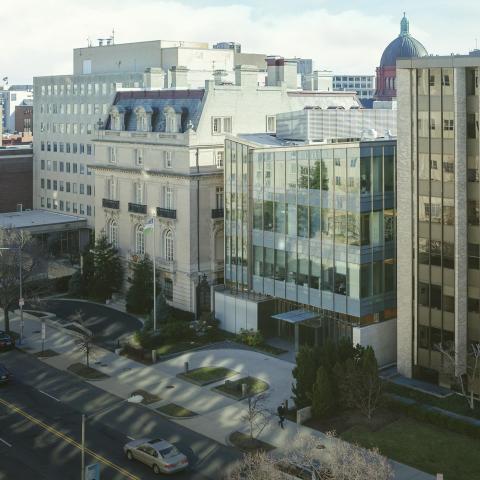