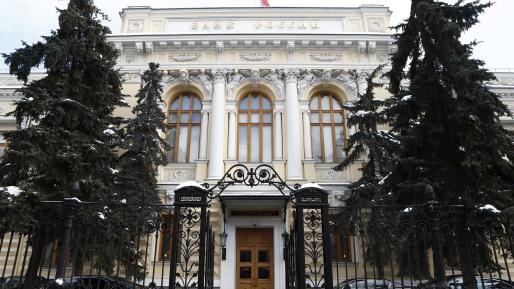 Russia's ruble actions are monetary theater of the absurd

It would be a stretch to say that the ruble has been turned into rubble, but the sanctioning of the Bank of Russia by the United States, European Union, and other major economic powers has jolted the Russian monetary system, forcing monetary authorities to revert to a command-and-control approach largely abandoned in the 1990s. Money and banking in Russia are now caught in a Looking-Glass world in which exchange rates are not what they seem, and Russia's hard-won reputation for monetary and financial acumen, like its reputation for military prowess, is in tatters.

At first, the West's sanctions prompted a scramble by private sector individuals and businesses in Russia to withdraw foreign currency and ruble deposits from Russian commercial banks. The Bank of Russia's open-handed provision of liquidity to meet ruble withdrawals, together with its decision to double its policy interest rate to 20 percent, prevented the scramble from becoming a panic (figure 1). But normalcy has not returned.

The ruble is not a major currency. But on March 23, President Vladimir Putin attempted to portray it as such when he insisted that importers of Russian natural gas would have to pay in rubles and not in euros or dollars. He may also have hoped to scare the West into weakening the sanctions. In practice, though, his insistence was meaningless. It turns out that European gas importers can still pay euros into a Russian bank, which then converts the euros into rubles. The only losers here are the Russian gas exporters, mainly Gazprom, who will no longer get their hands on foreign exchange. As when Humpty Dumpty spoke to Alice, Putin's words seem to have meant whatever he chose them to mean, neither more nor less.

Also smacking of politics was the Bank of Russia's offer to pay 5,000 rubles per gram for gold over the coming three months: This offer is less than the market price of gold, so the offer is unlikely to generate much supply.

More substantively, borrowers of dollar-denominated loans from Russian banks can now convert them into ruble loans at the pre-war exchange rate: again a sudden change in meaning.

There is no doubt that the financial and other sanctions have weakened the Russian economy and its ability to source certain materials needed to pursue its war in Ukraine. But the sanctions fall short of crippling the economy, as long as they do not interrupt the flow of revenue from exports, which finances the budget and also ensures continued availability of foreign exchange to pay for needed (and unsanctioned) imports.

As soon as the sanctions were imposed, the Bank of Russia reverted to a command-and-control approach by introducing a draconian requirement on all exporters to surrender 80 percent of the foreign exchange earned from exports since the beginning of the year. With this action, and the blocking of most private transfers out of Russia, the bank assured a sufficient flow of foreign exchange to pay for essential imports, as Russia has been running a sizable trade surplus for many years (thanks mainly to oil and gas exports).

In playing its increasingly command-and-control role, the central bank can selectively route these surrendered euros and dollars to whatever imports the government considers to be essential. And it can even do so at whatever exchange rate seems appropriate.

Indeed, with so many foreign exchange transactions removed from the market, the market value of the ruble becomes less significant for Russia's economic performance. Many experts assumed that the ruble would fall sharply, as it did at first, falling from 77 to the US dollar just before the invasion to 120 about two weeks later. But then it improved sharply to about 84 at present.

As soon as the fighting began, the Bank of Russia stopped publishing its weekly statistics on reserves. It was not immediately clear whether this bounce-back resulted from the bank using unsanctioned reserves in massive market intervention (as it had in similar circumstances during 2014). Last week, though, for unknown reasons the bank reversed course and started publishing reserves data again. Reserves have fallen about $40 billion since the eve of the war, but the weekly pattern of the fall is intriguing. Most of it occurred before March 4, while the ruble was still weakening. During the following three weeks, when the ruble recovered, the net fall in Russia's reserves was less than $5 billion—less than 1 percent of the total. (See figure 2, which includes the value of the blocked, sanctioned, reserves.)

It is not clear whether the rest of the $40 billion reduction in reserves reflected sizable capital outflows by Russian entities in the days around the start of the war. Since February 28, most capital flows out of Russia have been substantially blocked, for both Russian residents and foreigners, though the government is choosing to service its foreign currency debt. The sanctions have left, for the time being, sufficient loopholes for these payments to be made to foreign creditors.

Stemming and reversing the fall of the ruble may have some limited effect in slowing the inflationary surge in prospect in Russia. But Putin probably sees the symbolic political value of stabilizing the dollar value of the ruble to be of greater importance.

This piece of monetary theater focusing on the value of the ruble does not necessarily further weaken the Russian economy during the war. Yes, manufacturing exports will become unprofitable if the ruble is maintained at a rate increasingly disconnected from costs as inflation accelerates. But that disconnect matters little while international demand for Russian manufactures is interrupted by war.

Thirty years ago, in the dying days of the ruble zone, bank deposits were not freely convertible to cash, and ruble deposits in different parts of the former Soviet Union traded at varying rates of exchange. The Russian monetary system is not at present as chaotic as it was in those days, but in the last few weeks it has been subjected again to bureaucratic control and artificial prices that do not reflect reality for most economic agents. There is ample scope now for the emergence of black markets and increased opportunities for corruption.

It must be frustrating for the Russian authorities to lose access to so much of the foreign currency war chest they had so methodically rebuilt over the past seven years since the Minsk agreements that set up a ceasefire and other agreements in Ukraine's eastern Donbas region without ending the conflict in February 2015. But as long as Russia can channel the flow of foreign exchange from exports to needed imports, the central bank will not feel the loss of access to these assets.

Eventually, when the hostilities in Ukraine come to an end, the question of reparations will loom large. Russia's reserves are approximately four times Ukraine's pre-war GDP. A peace settlement that ignores this obvious source of reconstruction funding seems unlikely.

In a world in which exchange rates are not what they seem, and where the main exporters no longer earn foreign exchange but their customers only pretend to be paying in rubles, and where measures flaunted as targeting foreigners truly constrain mainly Russian nationals, Russia's painstakingly constructed reputation for monetary and financial acumen has crashed even as its president boasts of progress. The distorting impact of a horrific war could not be more disheartening for economic as well as humanitarian reasons.

Russia's Challenge: Reassuring Markets that Inflation Is at Bay