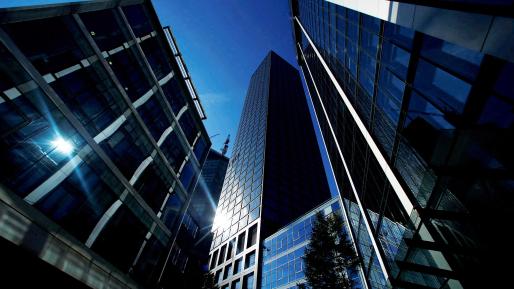 Financial sanctions have devastated Russia's economy. The EU and global financial system are absorbing the shock.

Since Russia's invasion of Ukraine started on February 24, much has happened in the financial sector, and events keep unfolding at a rapid pace. At the time of writing, Russia is reeling from the impact of massive financial sanctions inflicted by a very broad pro-Ukraine coalition. The Ukrainian financial system is battered but remains functional; and the European Union (EU) financial system has rather easily absorbed the initial shock, as has the global financial system more broadly.

Because it is war, it is impossible to convincingly disentangle what is happening on the financial front from the broader, primarily military-driven environment. We also do not analyze here other major economic developments, such as trade policy measures and withdrawals from Russia by nonfinancial companies. Even so, the financial sector action has been broad enough to deserve specific attention.

The pro-Ukraine camp's financial sanctions have included three main planks. First, a dramatic expansion of sanctions against specific Russian individuals. Second, a series of sanctions against individual Russian banks, including—but far from limited to—the much-hyped ability of the EU to mandate their disconnection from SWIFT, the international interbank messaging system which is based in Belgium and thus under EU jurisdiction, now also known as "de-SWIFTing". And third, the incapacitation of the Central Bank of the Russian Federation's (CBRF) use of its international reserves in a number of jurisdictions that critically include the US, EU, UK, Canada, Japan, Australia, and Switzerland, namely all the core reserve-currency jurisdictions of the world bar China (China's share of the world's aggregate central bank foreign reserves remains in the low single digits, even though its share of the CBRF's reserve is significantly higher). The third action, targeting the CBRF, unambiguously counts as systemic and affects the entire Russian financial system and economy. The first is about individuals. The second occupies a middle ground: If only a relatively small share of Russian banks is affected, it is nonsystemic, but if most are, it becomes systemic. From that standpoint, the EU's de-SWIFTing actions are still nonsystemic, since only seven institutions representing about a quarter of the Russian banking system are on the latest list. More could follow, however. In addition to these governmental decisions, some key financial firms are restricting their Russian services on their own initiative, such as VISA and MasterCard, adding to the general disruption.

The impact of the systemic CBRF-targeted sanctions on Russia's currency and economy is devastating, in part because they were so unexpected, and despite the continued ability of Russia to achieve a current-account surplus as long as it keeps exporting hydrocarbons. In the past, the United States has sanctioned other central banks, e.g., in 2019 Venezuela and Iran. What has never happened before, however, is coordinated action by all Group of Seven (G7) jurisdictions against a central bank, let alone one as large and internationally active as the CBRF. In fact, none of the 63 central banks that are members of the Bank for International Settlements (BIS) in Basel has ever been the target of financial sanctions. The CBRF is a member not only of the BIS club but also of its more exclusive subsets, e.g., the Financial Stability Board or the Basel Committee on Banking Supervision. It was hard to anticipate that it could be blackballed so promptly. Astonishingly for observers of the ostensibly soft-spoken, consensus-driven central banking community, the BIS announced on February 28 that it would itself follow sanctions "as applicable," which was widely understood as alignment with the G7 stance. This has no precedent since the establishment of the BIS in 1931,[1] even during World War II. In recent years, the CBRF had diversified its international reserves away from US dollars and British pounds, but largely into euros (as well as Chinese renminbi and gold). In other words, it appears that the scenario that unfolded on February 26 had not featured on the risk map that underpinned the build-up of financial "Fortress Russia" since the invasion of Crimea in 2014. In hindsight, this was a clear miscalculation by the CBRF's otherwise highly competent governor and her team.

Ukraine, by contrast, is being devastated physically by the Russian military aggression, but is still very much standing financially. On March 1, the Ukrainian government issued $270 million in war bonds; since February 24, the country's central bank has benefited from a swap line of the National Bank of Poland, granting it a degree of access to international liquidity; more powerful assistance could come in the future from the International Monetary Fund, and possibly also from the European Central Bank, even though the latter is far from sure at the time of writing. In the war zones, of course, financial services are disrupted, as is everything else.

In the European Union, the initial shock has already been largely absorbed by the safety cushions created since the previous great financial crisis—thank goodness for Basel III. The presence of Russian banks in the EU is being promptly terminated in an orderly manner. The largest such entity, Sberbank Europe AG in Austria, has been liquidated in the immediate aftermath of the invasion after its Russian parent decided not to give it liquidity support; the second-largest, VTB Bank (Europe) SE in Germany, is likely to go the same way. On the other side of the divide, several EU banks, most prominently including Raiffeisen, Société Générale and UniCredit, have substantial operations in Russia and other financial exposures to its economy. Their stock price has suffered, but not collapsed, and it currently appears that their capital base is sufficient to absorb the shock. Unexpected damage could surely pop up in other corners of the system. But that risk does not currently appear large enough to threaten financial stability at a systemic level.

What happens next is, of course, anyone's guess and will keep depending on military developments. Further escalation of financial sanctions is possible. For example, the EU could de-SWIFT more Russian banks—possibly including Sberbank, which is already subject to harsh US sanctions, namely a correspondent accounts cutoff that prohibits it from clearing payments through the United States. The EU could also sanction Russian banks more strongly, e.g., banning all transactions with them and freezing their assets (full "blocking" sanctions) as the United States already does, for example, with VTB. Perhaps most important, pro-Ukraine jurisdictions could move towards banning energy purchases from Russia, which are currently allowed under their respective financial sanctions regimes.

On a more long-term, structural basis, only time will tell if the recent action against Russia has contributed to strengthening the international financial system, by punishing destructive behavior, or fragmented it into increasingly decoupled competing blocks. It bears noting, once again, that the recent financial sanctions have been far from unilateral, but on the contrary have been adopted, certainly with local variations, by an extremely wide group of financial jurisdictions that goes beyond "the West." Russia's transgression of international norms is so radical that it remains to be seen to which extent the international response to it, radical as it has been as well, has precedent value.

1. Clarification, added March 14: In 1992, the BIS froze assets held by one of its members, the National Bank of Yugoslavia. But the trigger was the country's breakup, which raised questions about the assets' ownership. There are no such questions in the case of Russia now.

The Russian Economy Is Heading toward Disaster

Did Putin Win in East Ukraine?