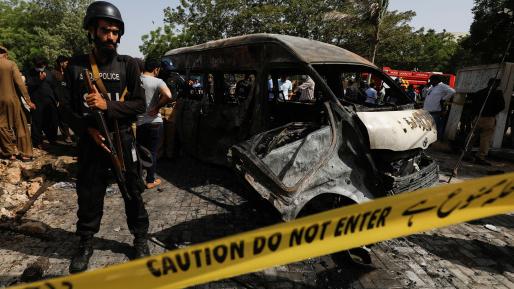 China's 21st century attempts to deepen its economic ties via the Belt and Road Initiative (BRI) and widen its soft power abroad via the Confucius Institute program have created a network of vulnerable Chinese nationals abroad. What remains to be seen is whether these attacks will draw China into a more interventionist stance—a stance it has so far sought to avoid even as its economic and diplomatic influence has grown.

Of particular concern to the Chinese is a spate of recent attacks in Pakistan, where the BRI is undertaking extensive port, rail, and highway infrastructure projects, while the Confucius Institute seeks to deepen political and cultural ties, furthering the decades-long closeness the two countries have enjoyed. China has deplored the attacks on its citizens and demanded an investigation. The BRI has caused economic strains in Pakistan, which is seeking financial help from the International Monetary Fund (IMF) to repay loans from China.

The most recent high-profile attack occurred in April, when three Chinese academics and their Pakistani driver were killed in a suicide bomb attack on their van near the Confucius Institute at the University of Karachi. The Balochistan Liberation Army, a separatist terrorist group based at the border with Afghanistan, claimed responsibility, describing the Institute as "the symbol of Chinese economic, cultural, and political expansionism." Last year, nine Chinese engineers working at the Dusa hydropower plant in northwest Pakistan were among the 13 killed by an attack on a bus. No group claimed responsibility for the attack, but the region is a highly unstable area on the Afghan border and home to separatist and militant Pashtun groups, including the Pakistani Taliban.

The scope of BRI and Confucius Institutes

The BRI and spread of Confucius Institutes across the globe embody different approaches to achieving greater Chinese influence. The former leverages the basic tools of economic diplomacy, building influence by providing much needed infrastructure improvements and development financing and deepening China's trade ties with BRI countries. In 2020, more than 600,000 Chinese workers were working abroad on contracted projects and providing labor services. This number only includes projects approved by the Chinese Department of Commerce, and it is likely a substantial undercount of true numbers abroad.

The Confucius Institute program, established in 2004, is an exercise in soft power projection, promoting Chinese language and culture through teaching, events programming, and exchange programs. As of 2021, there were 525 institutes in over 140 countries. The approaches of the initiatives can be mutually reinforcing, with soft power boosting exports and development assistance increasing positive perceptions of the donor country—though interestingly, China may be an outlier: Its investments in Africa seem not to be winning any friends on the continent.

Both approaches have created vast networks of soft Chinese targets abroad. Local populations have comparatively easy access to the BRI projects, which make heavy use of Chinese (and Chinese-staffed) construction firms and supporting industries. At Confucius Institutes, the people and their cultural capital are the main export. While some Confucius Institutes are lavish stand-alone facilities, many are standard office spaces on or near university campuses. These soft targets are enticing to violent dissidents in host countries looking to call attention to their causes (whether or not they are explicitly anti-Chinese).

Sub-Saharan Africa and South and Southeast Asia are prime targets for both initiatives and home to a disproportionate number of the world's national self-determination movements. Pakistan is notoriously rife with such movements, but others exist throughout Africa and Asia. For example, Katangan separatists operate in the Democratic Republic of Congo (DRC), and a host of armed groups seek independence or autonomy for various ethnic minorities in Myanmar. These and other countries are host to both BRI-related projects and Confucius Institutes.

Pakistan is home to one of the BRI's most ambitious projects: the China-Pakistan Economic Corridor (CPEC), a planned project of highway and rail links extending from the western Chinese city of Kashgar to much of Pakistan from the northwest to Punjab and Pakistan's warm-water deep-sea port at Gwadar. The project must traverse restive provinces from the Federally Administered Tribal Areas (FATA) in the north to Balochistan in the south. Locally, these infrastructure projects are not always viewed as benign capacity- and efficiency-enhancing interventions. Infrastructure is the skeletal structure of the state, and if completed, the CPEC will increase the Pakistani government's interests and presence in the region.

The Karachi bombing, a clear example of anti-Chinese/BRI sentiment leading to a soft-target attack against Chinese nationals, illustrated Pakistan's vulnerability. The suicide bomber, identified as a female, detonated her weapon after a van carrying Confucius Institute personnel stopped at a simple swing-arm gate. At the time, the Karachi University campus—a 1,200-acre educational facility serving 46,000 full-time students—had only one walk-through pedestrian screening machine that had been out of service for two years. Irrespective of Chinese engagement and presence, Pakistan's domestic security situation is tenuous, with both Islamist and ethnic separatist violence resulting in the twelfth-worst country score on the World Bank's Political Stability and Absence of Violence indicator.

Since the attack, university security has been funneling all students through a single walk-through gate at each main entrance. But the backup of students waiting to enter has itself created an even larger soft target outside the semi-secure perimeter.

These soft targets are not just attractive to secessionists. Armed groups have multiple motives, including simply personal enrichment. Many such groups turn to kidnapping as a revenue-generating strategy. Chinese nationals in Africa are seen as "sweet pastry," as one Nigeria-based Chinese national put it: perceived as having lots of cash on hand or being backed by international firms willing to pay handsome ransoms.

In January, gunmen in Nigeria kidnapped three Chinese workers at a Sinohydro dam construction site in Niger state, Nigeria. Sinohydro is a Chinese state-owned enterprise (SOE) and among China's largest construction firms. These gunmen were identified as "bandits" by the Nigerian press, a catch-all term that describes many independent, often competing armed groups that split the differences between traditional organized crime, local ethnic militia, and local warlords. In November 2021, five Chinese nationals were kidnapped while working at a gold mine in eastern Congo. In both cases, host-country security forces were present but insufficient to prevent the attacks. In Nigeria, Chinese nationals are not the only targets for kidnapping, with many victims being wealthier Nigerians and dual US-Nigerian citizens. What makes Chinese targeting unique are the ties many Chinese nationals have to Chinese SOEs and BRI-financed projects.

So far, China's strategy to deal with these threats has been dominated by pragmatism and diplomacy: paying ransoms to secure release, pressuring host-country officials to provide better security, and exporting surveillance technology to help identify and interdict would-be extremists. But there are limits to what Beijing can reasonably expect host countries to implement given the governance challenges in the environments to which their investments have been drawn. Chinese outward foreign direct investment (FDI) has targeted countries with weaker rule of law, and this tendency is amplified by the presence of BRI-related projects. Even if Chinese outward FDI can lead to improvements in local regulatory quality and rule of law, it does not seem to attenuate political violence. The areas where the African kidnappings occurred—Niger state in Nigeria, South Kivu in DRC—are active conflict zones where the government's ability to provide security is highly contested at best.

Direct military action has not been put on the table yet, though Chinese cooperation with and training of African militaries has increased dramatically in the last decade. While this expansion is logical given China's global ambitions and increasing economic ties to the region, attacks and kidnappings may be providing additional impetus.

Instead, SOEs and private firms operating under the auspices of the Chinese Enterprises Association (CEA)—organizations that promote Chinese firms' interests in host countries with support from local Chinese embassies and consulates—have turned to private security. After the Congo kidnappings, the CEA contracted with Frontier Services Group (FSG), a private security firm founded by former Blackwater CEO Erik Prince, to provide security at several mines.

The Blackwater link is telling, because it highlights the risk Chinese enterprises assume when they use private security firms. In 2007, Blackwater employees opened fire on Iraqi civilians while on a protection detail for a US embassy convoy, killing 17 and injuring 20. Aside from the tragic loss of life, the event eroded popular support for the broader US mission and presence in the country. There are reputational risks to contracting out to security services, even if the private security industry has learned significant lessons from its past mistakes. Beijing is sensitive also to Chinese public opinion, which has derided the attacks and perceived lack of security for Chinese nationals abroad for some time.

The big question is whether attacks on and kidnappings of Chinese nationals will either deter further engagement—an unlikely outcome—or pull China into closer security relationships with participating countries, especially those that lack the capacity to effectively police armed groups within their borders. One of the supposed hallmarks of Chinese overseas engagement has been its avowedly apolitical stance vis-à-vis partner countries, seeking not to meddle in their domestic affairs or attempt to reform host-country governance institutions. As a rising superpower with global economic ties, China's security interests are logically expanding well beyond its borders and immediate maritime domain. Historically, these ties have ensnared (or encouraged, depending on one's point of view) major powers in the domestic affairs of foreign countries. It is unlikely China will be able to resist similar pressures for long.