The US Treasury today officially labelled Vietnam as a currency manipulator, a process that will trigger “enhanced bilateral engagement with Vietnam” and could eventually be used to justify countervailing duties against Vietnam. The Vietnamese designation may well have been consistent with the criteria set out in the 2015 law updating the US approach to currency manipulation, but this designation is a substantive mistake when it comes to Vietnam and an illustration of the broader problems with the concept of currency manipulation.

Why Vietnam should not be considered a currency manipulator

The most recent International Monetary Fund (IMF) evaluation of Vietnam’s currency valuation was for 2018. They used a “lite” version of their “External Balance Assessment” model, which compares what they think the current account balance should be to what it is. The model also estimates the exchange rate adjustment needed to bridge the gap. This technique suggested that Vietnam’s currency was undervalued by 8.4 percent, helping its exports while increasing its trade and current account balance. The IMF also showed an alternative measure based on its “Real Effective Exchange Rate” model, which is based on a statistical analysis of exchange rates. This model found that Vietnam’s currency was overvalued by 15.2 percent, indicating that exchange rate policies were actually hurting Vietnam’s exports. The IMF prefers the results of its External Balance Assessment model, which it views as less noisy. But these widely diverging results indicate that these methodologies provide very rough and fragile answers to questions on exchange rate valuation.

Moreover, the Vietnamese dong has been roughly constant against the US dollar since mid-2018. But it has strengthened overall against the currency values of its broader range of trading partners, as shown in figure 1, rising by 2 percent using a CPI-based real broad effective exchange rate index and 8 percent using a PPI-based index relative to its annual average values in 2018. The difference, of course, reflects the fact that the dollar has also strengthened against many other currencies since 2018. Vietnam was doing less to protect its exchange rate from appreciating than it was allowing the exchange rate to appreciate on a global basis. The changes since 2018 would eliminate much of any misvaluation found by the IMF in 2018, putting Vietnam’s misvaluation well within the margin of error for the IMF’s metrics and in a similar position to many other currencies around the world. 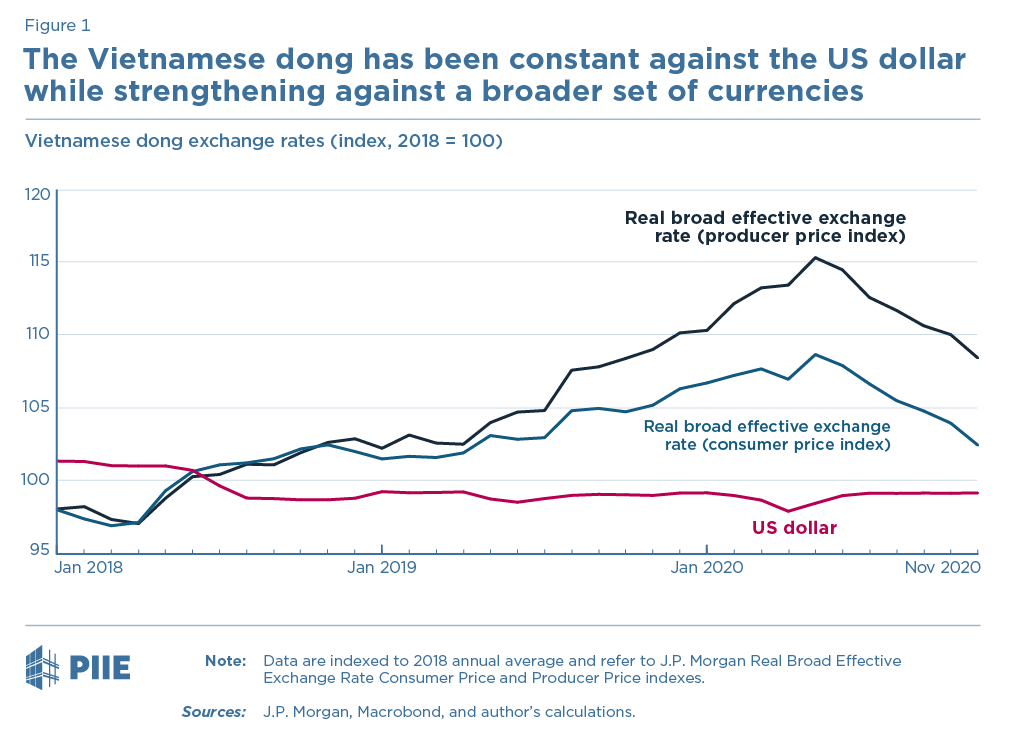 The other claims to support Treasury’s argument are also relatively weak. Vietnam did accumulate substantial reserves over the last year, but brought them to only 25 percent of GDP, which is less than the amounts that neighbors like Malaysia and Thailand have accumulated, and generally in line with other emerging economies.

Vietnam is also projected to have a relatively small current account surplus of 1.2 percent of GDP in 2020, down from the 3.4 percent surplus in 2019. The Treasury’s case, consistent with the law, is based more on Vietnam’s bilateral trade surplus, which has indeed increased with the United States. But this surplus results more from a shift of export production to Vietnam than from any policy change in Vietnam. The disconnect between the overall current account or trade balance and the bilateral trade balance helps illustrate why there is widespread agreement that the bilateral criteria for currency misvaluation make little sense.

Finally, it is worth noting that Vietnam’s currency changes so far this year have not been particularly notable, remaining virtually unchanged, compared with emerging G20 economies, as shown in figure 2. Of course, different countries had different equilibrium pressures on their exchange rates. But Vietnam is one of the few countries that did not see a depreciating exchange rate relative to the US dollar in 2020. 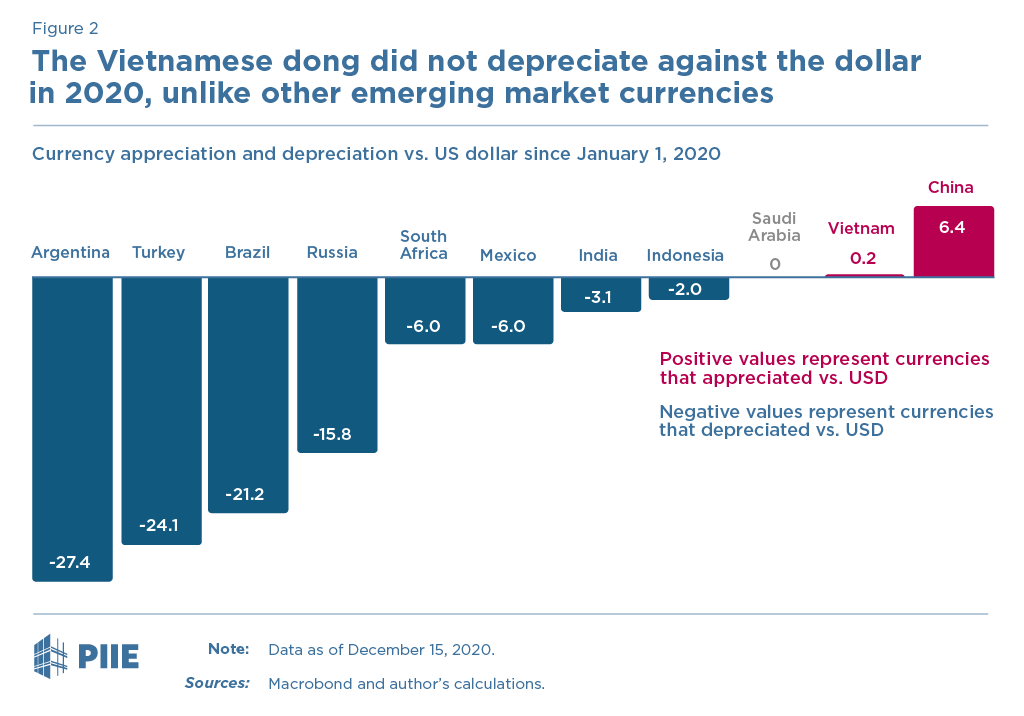 The broader problems with the concept of currency manipulation

The Treasury’s designation of Vietnam as a currency manipulator illustrates two bigger problems with the entire framework. These problems include the framework’s overreliance on bilateral deficit measures but go beyond that as well.

The first is that Vietnam does have a heavily managed exchange rate that is largely fixed against the dollar, trading in a relatively narrow band since 2018. The country uses a combination of reserve changes and capital controls to maintain this exchange rate. There are pros and cons of fixed exchange rates, basically a country decides to give up some of the macroeconomic benefits of monetary policy autonomy in exchange for the microeconomic benefits of greater trade predictability. For many smaller economies that are heavily dependent on trade a fixed exchange rate may be a reasonable policy choice, and countries that fix their exchange rate will, by definition, spend periods of time deviating from what a fundamentals-based model would say their exchange rate ought to be. Moreover, to the degree it is not a reasonable policy choice, that is more a domestic problem for the country making the choice than an international issue.

The second issue is that in some sense all monetary policy is currency manipulation. When the Federal Reserve lowers its target federal funds rate it tends to weaken the dollar and boost US net exports. A country with a fixed exchange rate can achieve the same result by targeting a depreciated exchange rate and allowing its interest rate to move endogenously in response. In either case, policy is changing both interest rates and exchange rates with little basis for a strong conceptual distinction between the two approaches.

The monetary and exchange rate policies of Vietnam, an economy 1 percent the size of the United States, have only a minuscule impact on the US economy. The US current account balance, trade balance, and real exchange rate are largely determined by domestic factors like US monetary policy, fiscal policy, and the saving and investment decisions of US households and firms. To the degree that Vietnam is undervaluing its exchange rate, its biggest impact would be to switch the source of US imports from other countries to Vietnam while leaving the total magnitude of imports unchanged. This might bother Vietnam’s neighbors, but it is of limited concern to the United States. Even if Vietnam’s policies had an effect on the United States, it would not be clear whether or not the net effect would be positive (cheaper goods for US consumers) or negative (displacing US jobs).

To the degree exchange rate misvaluations are an issue, the issue is generally better both assessed on a multilateral basis (e.g., looking at broad effective exchange rates and overall current account balances instead of at bilateral exchange rates and trade balances). As the Peterson Institute for International Economic’s Euijin Jung points out, “Ironically, had the United States remained a member of the Trans-Pacific Partnership (TPP), it could have used the provisions of the side agreement on currency to restrain currency manipulation by Vietnam.”

The Treasury’s designation of China as a currency manipulator last year has largely been toothless, and there is a good chance the Vietnamese one will be as well. But going down this road still has costs in distracting from more important aspects of the economic relationship with Vietnam and opening up the possibility of a genuine trade war if countervailing duties were applied and Vietnam brought a World Trade Organization (WTO) case against them.

Ultimately, however, the biggest cost is that by displacing concern for US problems to external actors, it keeps the United States from focusing on the real ways to address its internal and external balances, which are through its own domestic policies, not just changing the policies in another economy that is 1 percent its size.