Vietnam has benefited from the US-China trade war, stepping in with exports to the United States as sales of Chinese goods have declined because of the Trump administration’s tariffs. But now the administration is invoking two separate US trade laws against Vietnam, charging it with currency manipulation and threatening to impose retaliatory tariffs on US imports from Vietnam. Whether Vietnam is actually manipulating its currency value to gain unfair trade advantages is debatable. Also controversial are the unprecedented legal tools the Trump administration is employing to go after Vietnam.

US trade laws allow the United States to impose countervailing duties (CVDs) against a country subsidizing its exports. The latest administration action takes the unprecedented step of identifying currency manipulation as a “subsidy” under the law. In a second action, the United States is invoking Section 301 of the US Trade Act of 1974, which allows imposing tariffs if a country is engaging in “unfair” trade practices. Here again, the administration is breaking new ground by charging that currency actions constitute “unfair” activity.

All US trading partners and the International Monetary Fund (IMF) see both these actions as a violation of rules under the World Trade Organization (WTO). These steps thus mark another case of the Trump trade team threatening the international trading and monetary regimes and are likely to provoke retaliation to US exports.

The CVD law requires an investigation to determine “material injury” to US manufacturers and to fine importers with countervailing duties. The US Treasury has reported to the Commerce Department that Vietnam had undervalued its currency by 4.7 percent against the US dollar in 2019. On November 4, 2020, Commerce then determined that Vietnam’s currency practices effectively subsidized certain passenger tire exports by 6.23 to 10.08 percent. A final determination is expected in March 2021, raising the question of whether trade experts in the Biden administration will come to a different conclusion. Still, for duties to be imposed the US International Trade Commission, a semi-independent arm of the government, must determine that US businesses were injured.

The other tool the Trump administration employed, Section 301 of the US Trade Act of 1974, gives broad authority to retaliate against countries deemed to be engaging in “unfair” trade practices. On October 8, 2020, the United States Trade Representative (USTR) initiated a Section 301 investigation into Vietnam’s currency practices when the section was first invoked alleging currency action as an unfair trade practice. The United States alleged that Vietnam’s central bank, the State Bank of Vietnam, purchased $22 billion in US dollars in 2019, lowering the value of its own currency (dong). The figure shows a sharp rise in Vietnam’s foreign reserves in 2019. Section 301 does not require any test for material injury to domestic industry. But the investigation could take months. 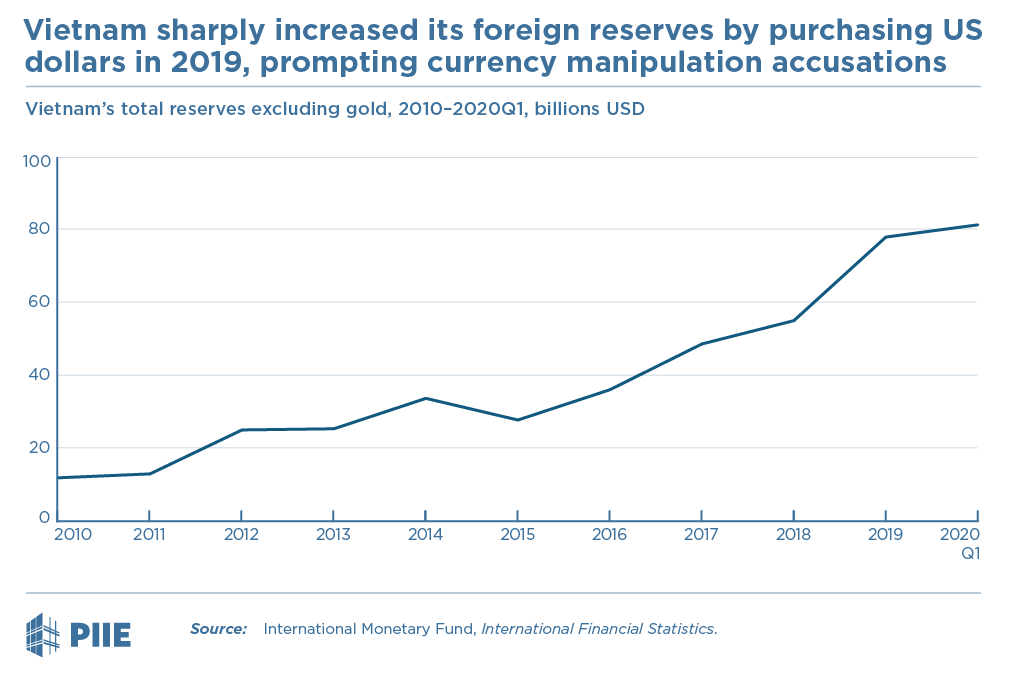 Both these Trump administration actions are certain to be challenged. The IMF has warned that such sanctions challenge a country’s monetary policy independence and provoke retaliation. Other economists say CVD should be reserved for large countries in the Group of Twenty (G20).

As mentioned, whether Vietnam is guilty of currency manipulation is hotly contested. In January 2020 Treasury put Vietnam on a monitoring list with nine other countries, finding that it violated one of three criteria—buildup of a current account surplus. Joseph Gagnon and Christopher Collins argue that the Treasury's criteria have been too narrowly focused on bilateral trade balances.

The WTO (and its predecessor, the General Agreement on Tariffs and Trade) never defined exchange rate changes as an export subsidy under the Agreement on Subsidies and Countervailing Measures (ASCM). Trade rules on currency provide for the IMF to take up any violation. Thus the new CVD rule is likely to be found to violate WTO rules.

Ironically, had the United States remained a member of the Trans-Pacific Partnership (TPP), it could have used the provisions of the side agreement on currency to restrain currency manipulation by Vietnam. Instead, the United States faces likely retaliation and complaints to the WTO by Vietnam. US farmers—dairy and poultry—are voicing concerns that the Section 301 investigation could hurt their exports to Vietnam.

The unilateral US approach is limited to resolving currency manipulation and would backfire on US exports. Instead, the United States should seek a multilateral initiative to fight currency manipulation via the WTO and the IMF. President-elect Biden has stressed that he will  work with allies on trade issues. His incoming administration should reverse this ill-considered US practice.

1. In parallel, USTR also launched a 301 investigation into Vietnam’s imports and use of timber that is illegally harvested or traded.

China and the Trans-Pacific Partnership: In or out?

The US retreat from East Asia is costly