This post was updated October 1, 2020, with more accurate data for Taiwan, which now exceeds the manipulation criteria in each of the past three years, albeit to only a minor extent. It was further updated November 20, 2020, with more complete data on official flows for Singapore.

Currency manipulation, the practice of countries acting to weaken the values of their currencies in order to boost their trade surpluses, remains near its lowest level since 2002. In 2019, the latest year for which nearly complete data exist, only Iceland, Singapore, Switzerland, Taiwan, and Thailand met the criteria for manipulation put forth by C. Fred Bergsten and Joseph E. Gagnon in 2017. Together, these countries purchased $160 billion in net official assets, considerably less than total purchases during the peak years of manipulation in 2003–13, which sometimes reached $1 trillion per year.

What defines a currency manipulator?

The US Treasury employs a somewhat different set of criteria to identify manipulators in its semiannual report to Congress on the Macroeconomic and Foreign Exchange Policies of Major Trading Partners of the United States. As we noted last year, the Treasury's analysis has improved in recent years, but major flaws remain including (i) too narrow a focus on the US's major trading partners, (ii) an inappropriate focus on bilateral trade balances, and (iii) the exclusion of official foreign currency purchases not classified as reserves.

This blog post applies the Bergsten-Gagnon criteria to updated and revised data for 168 countries from 2000 to 2019. Over this period, 20 countries met the criteria in at least one year.1

The figure below shows the sum of net official flows for these countries from 2000 to 2019 in billions of US dollars. We include all purchases of these countries, even in years in which they did not meet all the criteria, because most of them have no need for additional official foreign assets even when their purchases or their trade surpluses were not in excess of the criteria. For example, China purchased over $500 billion in official foreign-currency assets in 2013, but its current account was only 1.5 percent of GDP in that year, below the 3 percent criterion. 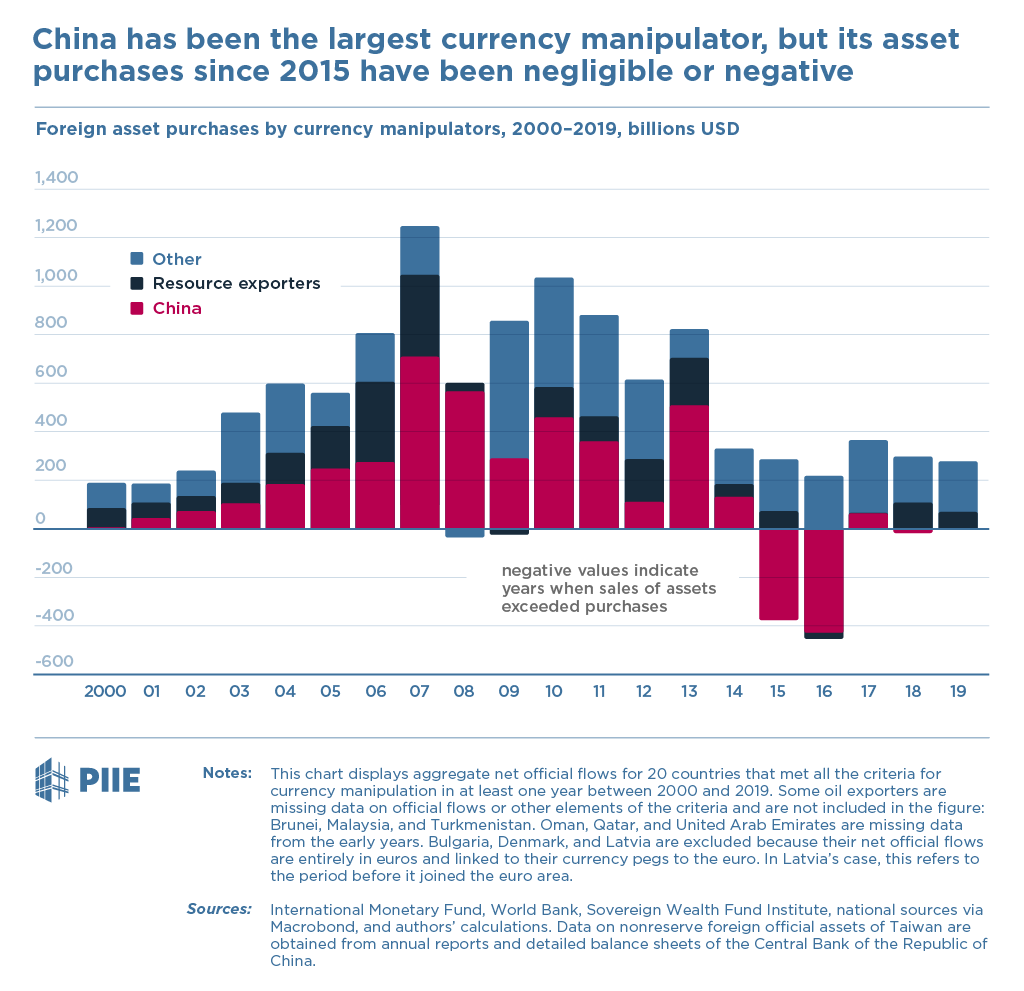 China was the largest manipulator during the peak years of currency manipulation, but it has made only negligible net purchases since 2015. Indeed, China was a large net seller of foreign assets in 2015 and 2016 when there was downward pressure on its currency. Aside from that episode, it is striking how consistently these countries as a group are always net buyers of official foreign assets and never net sellers.

As illustrated in the figure, total currency manipulation in recent years was considerably less than it was from 2003 to 2013—the period Bergsten and Gagnon deemed the "decade of manipulation." The table below lists all countries that met the criteria in the last three years. The first column displays the number of years in 2017–19 that a country met all the criteria. The remaining columns display the net official asset stocks, net official flows (purchases), and average current account balances of these countries.2

Note: This table lists countries that exceeded all criteria for currency manipulation in at least one year from 2017 through 2019. Differences in data for 2017 and 2018 compared with our June 6, 2019 post reflect revised data and new sources for official purchases.
Sources: International Monetary Fund, World Bank, Sovereign Wealth Fund Institute, national sources via Macrobond, and authors’ calculations. Data on nonreserve foreign official assets of Taiwan are obtained from annual reports and detailed balance sheets of the Central Bank of the Republic of China.

Countries are sorted into three broad groups—financial centers, manufacturing exporters, and resource exporters—and ranked within each group by number of years of manipulation first and net official assets second.

The financial centers are the most consistent manipulators, with the same four countries showing up here as found by Bergsten and Gagnon. Singapore had the largest dollar volume of official flows of all countries in each of the past three years.

Of the eight manufacturing exporters identified by Bergsten and Gagnon, only two manipulated their currencies in the past three years, Taiwan and Thailand. These countries have been as consistent in their manipulation as the financial centers, although Taiwan's steady official flows are only slightly above the criterion for manipulation.

Of the eight resource exporters identified by Bergsten and Gagnon, only Norway remains, and for only one year: 2018.4 Low oil prices in recent years have greatly reduced excessive purchases of foreign assets by resource exporters. A new entrant, Iceland, is placed in this group because of its significant exports of fish and aluminum. Its official purchases have not been consistent over time, moving from negative in 2017 to near zero in 2018 and modestly above the cutoff in 2019.

The pandemic has sparked large appreciations of reserve currencies

We noted that there were initial signs this spring that Switzerland may have intervened heavily to hold down the Swiss franc. The Swiss National Bank later published data showing that it purchased large quantities of US dollars, euros, and other reserve currencies in March, April, and May, with negligible purchases of weaker currencies. Countries with large trade surpluses should not be deflecting currency appreciations onto countries with trade deficits and currencies that are already strong. In addition to helping countries with excessive currency weakness, Switzerland should be making greater use of fiscal policy and domestic monetary expansion, as described in this Policy Brief.

1. Last year we applied the criteria only to the countries originally identified as manipulators over the period 2000–2015 by Bergsten and Gagnon.

2. The current account balance is the broadest measure of the trade balance.

3. With newly available data, Libya also exceeded the criteria in recent and earlier years. However, the civil war has drastically reduced Libya's GDP and raised governance issues concerning alternative uses of the oil revenues. For these reasons, we choose not to list Libya as a currency manipulator in recent years, though it was a manipulator before the civil war and is included in the figure.

4. In June 2019 we identified Norway as a manipulator in both 2017 and 2018, but revised data on oil production costs showed that Norway's official flows did not exceed 65 percent of oil exports net of cost in 2017.