G20 and other affected countries may wish to consider direct coordinated intervention in foreign exchange markets if these unwelcome depreciations persist or intensify. Any intervention should be mutually agreed between the buying and the selling governments. Countries with strong currencies should not be buying each other’s currency in an attempt to deflect appreciation elsewhere. Rather, countries with strong currencies should be buying currencies that have experienced excessive and unwelcome depreciations. Interventions should not be undertaken to achieve any specific level of exchange rates, but rather to lean against disorderly movements.

For more than 10 years, G20 leaders have pledged to seek market-determined exchange rates and abjured targeting exchange rates for competitive purposes. Over time, G20 countries that had a history of currency manipulation—China, Japan, Korea, and Russia—gradually moved away from excessive official purchases of foreign currencies. As of 2018, it appeared that no G20 country was manipulating its currency.

Nevertheless, the US dollar strengthened sharply in late 2014 and early 2015 as markets began to anticipate that the Federal Reserve would raise US interest rates while rates in most other countries seemed set to remain low. The dollar was roughly stable from late 2015 through February 2020 before increasing moderately in March 2020 (based on the Federal Reserve’s broad real dollar index).

The COVID-19 pandemic has not pushed the dollar up against all currencies, however. Rather, currencies of vulnerable countries appear to have fallen against those of other countries. The two main sources of vulnerability are stocks of debt issued in foreign currencies that exceed foreign exchange reserves and dependence on commodity, chiefly energy, exports. Among countries without these vulnerabilities, exchange rates have moved relatively little, but there is modest evidence of a flight to currencies traditionally viewed as safe havens, in particular those of Japan, Switzerland, and the United States.

The vertical axis in the figure displays the percent changes of G20 currencies and the Swiss franc against the US dollar from December 31, 2019 to March 31, 2020.[1] The horizontal axis displays each country’s foreign exchange reserves minus external foreign-currency debt as a percent of GDP. Countries with reserve currencies (or a currency pegged to a reserve currency in the case of Saudi Arabia) are shown in black.[2] Countries with significant net energy exports (greater than 20 million tons of oil equivalent in 2018) are shown in red.[3] 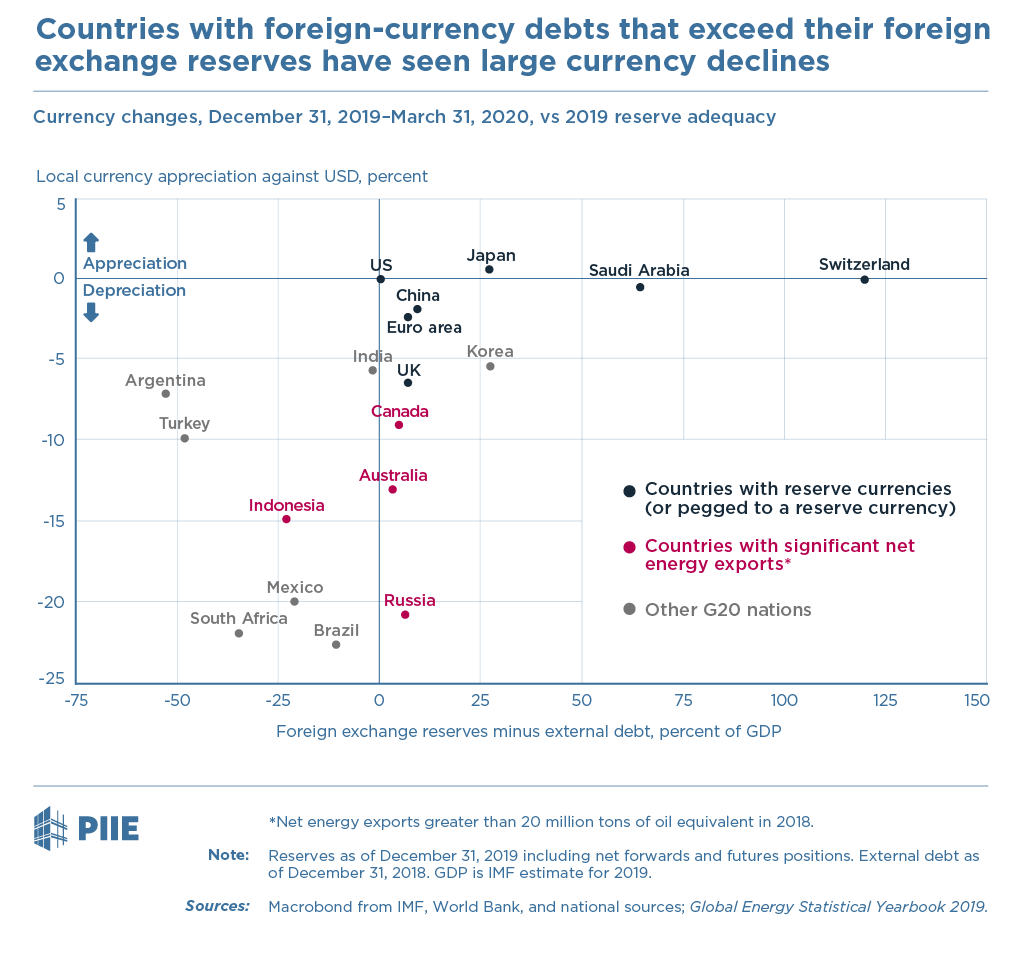 With the notable exception of the UK pound, which may have been influenced by the Brexit outlook, other reserve currencies have moved little against the US dollar. Countries with external debts that exceed their foreign exchange reserves have seen large declines in their currencies. The muted declines for Argentina and Turkey almost surely reflect the fact that their currencies declined far more than the others in 2019. The countries without large external debts that experienced sharp depreciations in 2020 are all major energy exporters.

Health policy responses to the pandemic are causing a very large drop in global energy demand, which has pushed down energy prices and foreign-currency revenues of major energy exporters. The economic textbook response is a sharp drop in the foreign exchange values of the currencies of energy exporters. For energy exporters that have not borrowed significant amounts in foreign currency (Australia, Canada, and Russia), the depreciation benefits tradable sectors of the economy and helps to stabilize the trade balance. For Indonesia, which has external debt in excess of its foreign exchange reserves, the benefits will be offset to some extent by financial stress on the borrowers.

The other countries with external debts in excess of reserves (Argentina, Brazil, Mexico, South Africa, and Turkey) have relatively small energy balances and are not strongly affected by the drop in energy prices. They may be adversely affected, however, by declines in other commodity prices and by the collapse of global tourism. Mexico is particularly vulnerable to the expected drop in US automobile sales and production. All these developments reduce projected export earnings and thus hamper the ability of external borrowers to service their loans.

A key concern in these countries is that their governments have only limited capacity to lend to external borrowers in the currency in which they borrowed. Central banks in many developing economies are selling foreign exchange reserves to obtain reserve currencies they can lend to domestic borrowers.[4] But reserves are less than external debt in many countries, and central banks are often loath to draw down more than a fraction of their reserves.[5]

In some cases, borrowers can liquidate local assets or obtain emergency loans in local currency from their governments or banking systems. But they must sell the proceeds to get the foreign currency to service their loans. This puts downward pressure on the local currency, as seen in the figure. The currency depreciation, in turn, raises the burden of foreign-currency debt service for companies that do not receive emergency loans, crowding out spending on domestic goods and services and damping economic activity.

A Modest Puzzle in Reserve Currencies

One possible explanation is that policymakers in these countries have been intervening in foreign exchange markets to prevent such an appreciation. We will not have the data to verify that explanation for a few more weeks. But it seems unlikely that Japan, the euro area, and the United Kingdom would have reversed a long established policy of nonintervention.[6] And China recently signed an accord with the United States that committed to a market exchange rate between the two countries.

There are signs that Switzerland may be intervening to prevent the appreciation of its currency.[7] Switzerland is not a member of the G20 and thus has not pledged to avoid targeting its exchange rate for competitive purposes. Indeed, as we showed in a previous blog, Switzerland has a recent history of large-scale intervention in foreign exchange markets.[8]

Aside from potential Swiss intervention, the most likely explanations of the puzzling nonappreciation of reserve currencies against the dollar are that (1) most of the risky foreign-currency borrowing is denominated in dollars, which increases the scramble to get dollars, (2) market participants expect a more vigorous fiscal response to the pandemic in the United States than elsewhere, and (3) the United States is viewed as the world’s strongest and safest economy.[9]

For energy exporters without significant foreign-currency debt, moderate depreciations are a natural part of the adjustment process and pose little danger. For economies with significant foreign-currency debt, sharp depreciations threaten more harm from inflation and rising debt service burdens than any benefit from greater exports, especially in the near term. Economies facing unwelcome sharp depreciations include many emerging-market and developing economies both inside and outside the G20. These economies need access to credit in foreign currency in order to service their debts without putting downward pressure on their exchange rates.

The most important policies to help economies facing unwelcome depreciations include providing access to central bank swap lines and beefing up lending capacity at the international financial institutions. Keeping markets open for exports from these countries is also helpful.

Reserve-currency countries may wish to consider coordinating direct foreign exchange intervention with affected countries if these unwelcome exchange rate tensions persist. Such intervention would be consistent with a longstanding principle that government intervention to calm disorderly exchange markets is both justified and beneficial. Any intervention should be undertaken in the spirit of “leaning against the wind” without any explicit or implicit expectation of achieving a given target for the exchange rate.[10] Whereas modest interventions between currencies of advanced economies with open and sophisticated financial markets might have only minor effects, evidence suggests that official purchases of currencies of emerging-market and developing economies often have more substantial effects.

One of us (Gagnon) has argued elsewhere that intervention in foreign exchange markets should be aimed at stabilizing and narrowing trade imbalances. Thus, one generally would not want to intervene to support the currency of a country with a persistent external deficit, such as Brazil. This principle is important in normal times, but it should take a back seat during the current COVID-19 episode of exceptional volatility, when exchange rates of some debtor countries have moved too far too fast. Indeed, if Brazil’s exchange rate were to remain at its current level in real terms, its current account deficit would surely shrink and perhaps even move into surplus. Further depreciation at this point is not helpful.

Any intervention should be mutually agreed between the buying and the selling governments. Countries with strong currencies should not be buying each other’s currency in an attempt to deflect appreciation elsewhere. Rather, countries with strong currencies should be buying the weaker currencies to minimize or reverse unwelcome sharp depreciations. Such purchases benefit both countries and even stand a good chance of being profitable when the panic subsides.

1. We include the Swiss franc because it is often considered a reserve currency and because Switzerland’s GDP is larger than those of Argentina and South Africa and roughly as large as those of Saudi Arabia and Turkey.

2. Reserve currencies are those that are widely held as foreign exchange reserves by central banks around the world. Here we focus on the constituent currencies of the International Monetary Fund’s special drawing rights (US dollar, Chinese yuan, euro, yen, and UK pound) plus the Swiss franc.

3. Saudi Arabia is also a major energy exporter, but its currency peg, supported by large foreign exchange reserves, is what matters here.

4. Foreign exchange reserves data for March 2020 are not yet available, but securities held in custody at the Federal Reserve Bank of New York for foreign central banks declined $117 billion between March 4 and April 1.

5. Indeed, there is a longstanding asymmetry between the rapidity with which many countries buy foreign exchange reserves to resist appreciation and their reluctance to sell reserves to resist depreciation. This asymmetry has led to a large secular increase in global foreign exchange reserves. Unfortunately, the largest reserve holdings are often by countries with the least external debt.

6. However, on March 31, 2020, Japan’s Government Pension Investment Fund announced an increase in its target share of foreign assets from 40 to 50 percent of its portfolio. With total assets worth $1.6 trillion as of yearend 2019, this shift implies net new purchases of foreign assets worth $160 billion. It appears that this shift was planned well before the pandemic, with 3 percentage points of the shift already accomplished by the end of 2019.

7. An article by Greg Ritchie in Bloomberg on April 2 noted that bank reserves at the Swiss National Bank have jumped sharply in March, in a pattern similar to that of previous episodes of large-scale currency intervention.

8. The Swiss National Bank uses large-scale intervention to avoid the deflationary effects that would arise from a further appreciation of the Swiss franc. This 2014 PIIE Policy Brief discusses alternative policy options for Switzerland that would avoid deflation while allowing beneficial adjustment of its large trade surplus.

9. A problem with the second explanation is that long-term bond yields have declined more in the United States than in other countries, which is not consistent with the conventional channel by which fiscal policy affects exchange rates.

10. There is considerable evidence that sterilized foreign exchange intervention does have significant effects on exchange rates and trade balances, especially in countries with restrictions on cross-border capital mobility. (See the papers by Blanchard, Adler, and de Carvalho Filho and by Gagnon.) But it is not possible to make a precise prediction of how much a given intervention will move the exchange rate.