South Korean Opinion on Unification I: What Bonanza?

We are now in the second half of Park Geun Hye’s term, and the East Asia Institute has released an updated report on South Korean public opinion toward North-South relations; the poll was run in May so it predates recent developments including the North-South Agreement and the staging of family reunions. It nonetheless provides a comparison between the results of its 2014 survey about unification in general and her “bonanza” concept from January 2014 in particular (our analysis is here).

The crux of her idea is that Korean unification will ultimately lead to large economic gains for both Koreas.  At least as of May, the public was not buying; in this two part post we look at EAI’s overall findings on public sentiment toward unification and in the next post at some of its possible determinants.

With respect to overall views of unification, the public’s attitude was nearly static between the two polls (figure 2). In 2015, 64% of the public were cautious, 17% said there was no need, and 15% were in favor of immediate unification.

But when we look at the “bonanza” idea, we see a drop in support, with a small majority in favor of the concept in 2014 shifting to a small majority against the idea. The most obvious explanation is that the policy—such as it is--has not exactly panned out. Rolled out concomitantly with Park’s Dresden speech on unification, the approach clearly raised concerns in Pyongyang about the South’s long-run intentions and they responded icily. The survey captures these developments. 65% of respondents said they felt that inter-Korean relations had deteriorated in the last year, 34% thought there was no change, and only 2% felt that inter-Korean relations had improved. 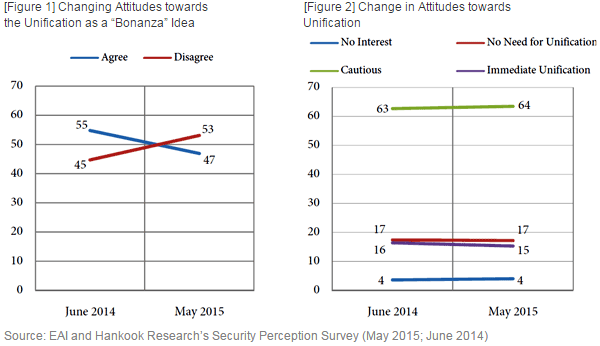 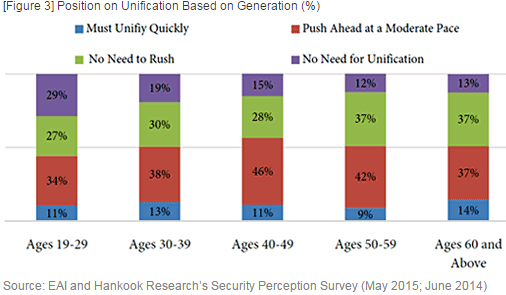 What is of continuing interest, however, are the marked—and growing—generational cleavages on unification. The “hard core” believing in quick unification is relatively constant across age groups at 10-15%. But fully 29% of those between the ages of 19-29 say there is no need for unification at all compared to only 12-15% in the over 40 age group. The report argues that the younger generation’s more skeptical attitude towards unification dates back to the early 2000s and reflects resistance to the efforts of successive administrations on both left and right to promote the idea.  But it is equally possible that without such relentless focus on such an intractable problem support for unification might have even been less.

Next time: some other determinants of public opinion.