The Politics of a Chinese Slowdown

An unexpectedly sharp slowdown and political drama at the highest levels has put a huge amount of pressure on the Chinese system. These things are occurring at a time when China faces a long list of needed reforms, all of which become more difficult to address the longer they are postponed. The problem is that political division and economic uncertainty make these reforms less likely to be tackled. 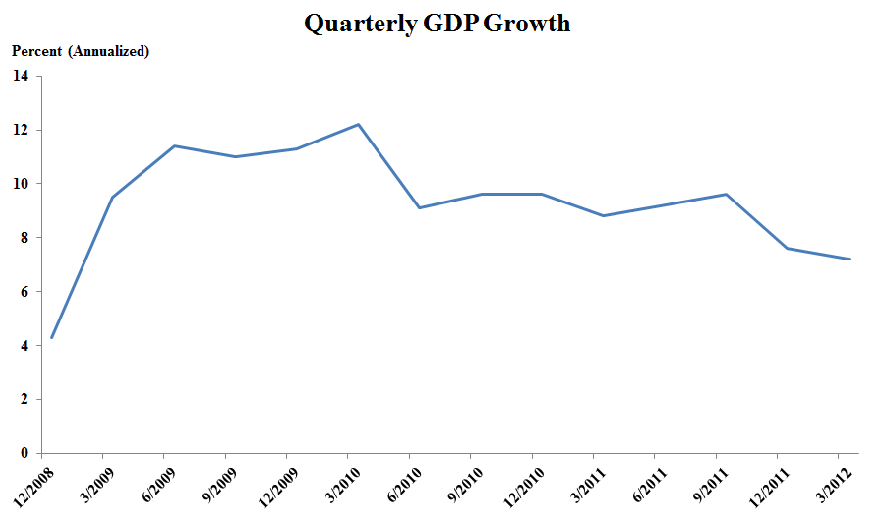 China avoided a rapid slowdown in 2008 with a well-timed stimulus that kept the economy humming for another three years despite the global financial crisis. Unfortunately, the stimulus did little to realign the imbalances in the Chinese economy that have been building over the past decade. 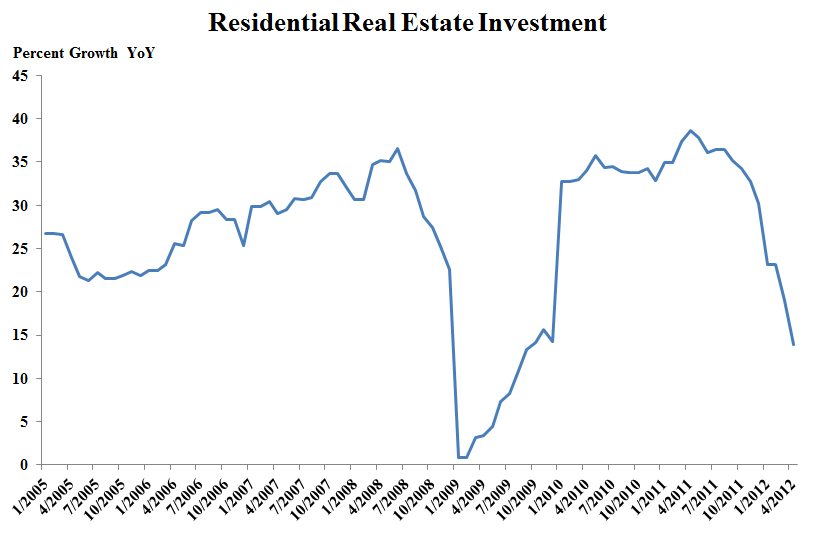 The clampdown on real estate has been a drag on GDP growth, even more so than expected.  The political drama over Bo Xilai has sucked up a lot of the top leadership’s attention, perhaps causing them to drop the ball on economic management. Whether or not this counts as a “hard landing” is a subject for debate, but economic conditions in China have deteriorated more quickly than desired by China’s leadership.

As many analysts have pointed out, Chinese policymakers still have a few tools left at their disposal. If Chinese leaders relax restrictions on the property market GDP growth may spring back to life, but this is far from certain. Unfortunately, this type of move will only push investment further into bubble territory. The choice now is between continued economic pain and short-term growth at the expense of sustainability.

The mini-stimulus approved by the NDRC in May and the affordable housing project will help a bit at the margins, but they cannot compensate for scale of the investment slowdown in the property market. As we’ve outlined many times before, increased consumption is the right source of future growth for China, but the reforms that would make that happen have continued to languish.

China’s leaders have shown a remarkable tolerance for economic pain over the past two years as they have sought to tame the housing market.  The pendulum, however, may now be starting to swing towards promoting growth as GDP and loan growth numbers have disappointed on the downside. Most importantly, the closer we get to the leadership transition the lower the tolerance will be for economic problems. Stability will win out over reform and restructuring as Chinese leaders try to assure a smooth handover.

Leadership transitions are always a precarious time for China and there is limited appetite for adding the stresses of a sharp economic slowdown. As the noted American political scientist James C. Davies pointed out in the early 1960s, it’s not during periods of great deprivation or rapid growth that political disturbances usually occur, rather it’s when a period of growth and rising expectations are suddenly reversed. This is precisely the type of situation China faces if the economy continues to deteriorate at the same pace as the first two quarters of this year. China’s leaders are keenly aware of the potential for social instability caused by a sharp slowdown in growth.

And so there is good reason to believe there is a firm political “floor” under this year’s GDP growth numbers. To the extent they can, China’s leaders will try to ensure that the economy continues to grow rapidly throughout the year. Politics will trump reform for the sake of ensuring a smooth and orderly transition. Short-term policies that promote economic growth will be the order of the day, typified by programs like the current appliance purchase subsidy and the required reserve rate cut. Rebalancing is likely to be put on hold until the next administration is forced to address it.