China's Growth Is Slowing, but not Because of the Trade War

President Donald Trump has repeatedly defended his tariff hikes on China by saying that they are not impeding US economic growth but are a main reason why China’s growth is slowing. “China is doing very, very poorly,” Trump told reporters recently, referring to its economy. “The tariffs have really bitten into China. They haven't bitten into us at all." The Chinese economy is so poor, he asserts, Beijing will soon agree to US terms for a trade agreement.

The facts don’t support his claims.

First, as is well known, US taxpayers, not Chinese consumers and companies, are bearing the burden of Trump’s tariffs. The president acknowledged as much when he postponed new tariffs on goods (such as toys and consumer electronics) likely to be purchased during the US holiday shopping season. US tariffs on imports from China will likely subtract about half a percentage point from US GDP growth in 2019.

But second, China’s growth began to slow long before the trade war started (see figure). The pace of growth has moderated from the double-digit pace of 2010 to only 6.2 percent in the most recent quarter. As for the assertion that the trade war has accelerated China’s economic decline, the facts show the opposite. As shown in the figure, the pace of the slowdown has moderated since the initial imposition of tariffs by the United States in July 2018. Most of the slowdown is the result of President Xi Jinping’s ill-advised policy choice of allocating credit and other resources to less efficient state firms rather than private firms. Moreover, since 2017, China has reduced the growth of credit overall in order to reduce financial risk at a time of growing corporate indebtedness, a trend that also contributes to slowing growth throughout the economy. 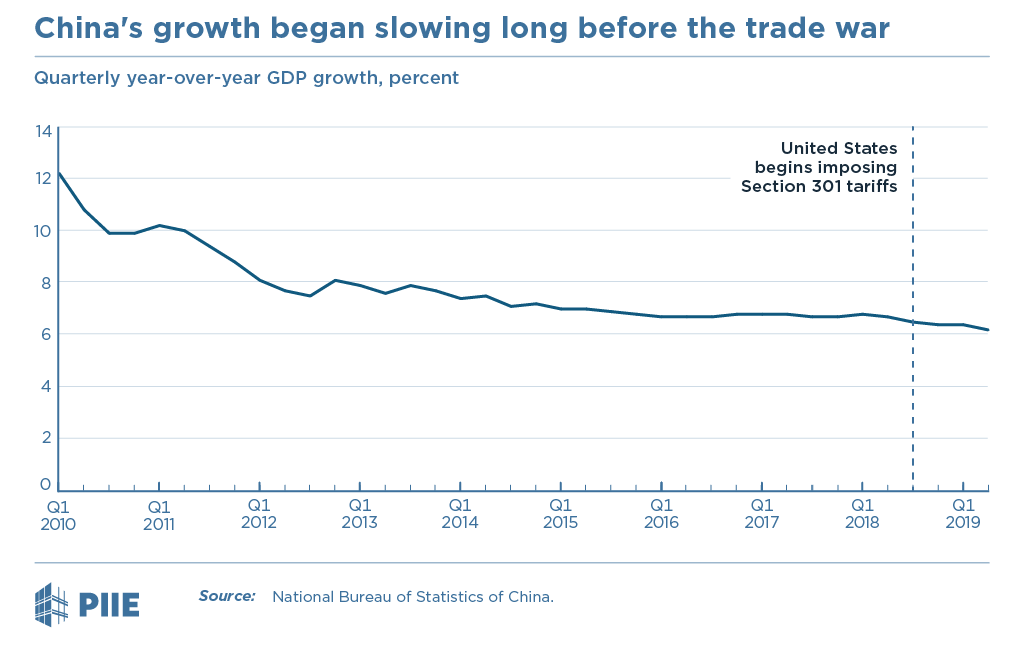 Third, properly measured, China’s dependence on exports to the United States is not as large as some, including President Trump, may think. China’s exports to the United States before tariffs were imposed ran at $500 billion annually, or 4 percent of its $12.25 trillion GDP, which in theory is a significant number. In fact, the percentage is far less. The potential impact of US tariffs on China’s growth needs to be adjusted to measure only value added by China. GDP is measured in value-added terms; US imports from China are measured in gross sales. The value-added share in US imports from China is about one-half, so the direct contribution to China’s GDP from its sales to the United States is approximately $250 billion or only 2 percent of China’s GDP.

Finally, at least prior to the rollout of new US tariffs on September 1, 2019, only about half of US imports from China were subject to tariffs. So, the potential direct hit to China’s GDP if the sales of these tariff-ridden goods collapsed is even less—about $125 billion, or 1 percent of China’s GDP. That is hardly enough to explain China’s growth slowdown in recent years.

Despite the trade war, US imports of goods from China subjected to tariffs have not collapsed. Overall US imports of goods from China in the first half of 2019 are down about 13 percent or $30 billion. This is a drop in the bucket compared with China’s GDP of almost $7 trillion in the first half of 2019. Moreover, in percentage terms, US exports to China have fallen even faster, with the result that the bilateral trade imbalance, the focus of much of the president’s attention, has declined only 10 percent.

The analysis here does not take into account the indirect effects of the trade war, including any decline in investment that may have resulted from the trade confrontation. Nor does it reflect the potential long-term adverse effect on China’s growth if the United States continues to restrict access to its advanced technology. But as the trade war grinds on, Trump’s claim that they are easy to win is proving elusive, and his conviction that China’s difficulties will persuade its leaders to capitulate to US demands on trade is looking more and more problematic.