An analysis of the tariff elimination schedules of the Trans-Pacific Partnership (TPP) released last week shows a pretty fair tradeoff between bilateral concessions made by the United States and Japan. Both countries are already relatively open to trade, with about 60 percent of tariffs below 5 percent. Of the more restrictive tariffs (including all tariffs above 5 percent and specific tariffs), Japan and the United States will each eliminate about two-thirds as soon as the agreement goes into force. For the United States, most of the higher tariffs to be eliminated immediately are in agriculture (such as vegetables and beans), chemicals, and apparel; for Japan, textiles make up most of the tariffs to be eliminated immediately.

In terms of the most distortionary tariffs—those involving the most sensitive products—the landscapes in the United States and Japan are different. The United States has a greater share of specific tariffs—payments expressed per quantity instead of as a share of value; while Japan has a higher share of tariffs in the 20+ percent range. Both countries delay liberalization for some of these highly-protected products, including tariffs on Japanese beef products, which expire after 16 years, US dairy products, which expire after 20 years, and US trucks, which have the longest expiration period of either country at 30 years. Specifically, about 6 percent of product lines will maintain 20+ tariffs or specific tariffs in both Japan and the United States in the early years of the TPP. Most of the tariffs that are not eliminated immediately will be reduced over a set timetable of between 4 and 30 years, and eventually almost all of US and Japanese tariffs will be eliminated entirely under the TPP. For Japan, 97 percent of tariffs will be eliminated over 16 years; for the United States, 99 percent of tariffs will be eliminated after 30 years.

Figure 1 US tariffs eliminated for Japan under the TPP 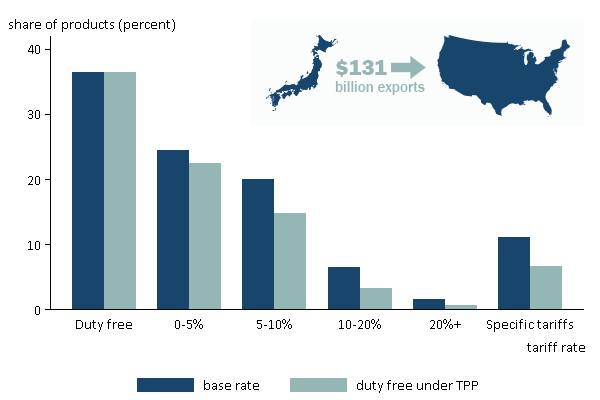 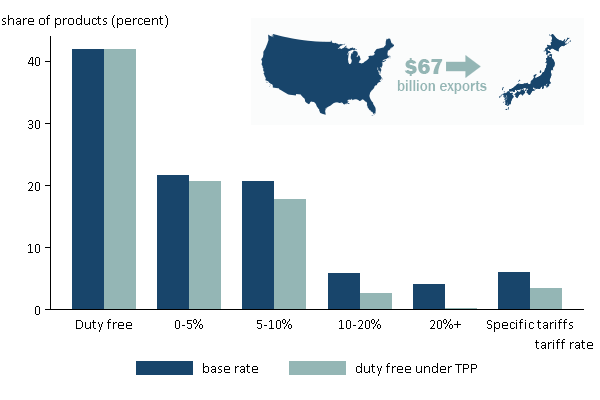 Note: Both the United States and Japan have slightly different tariff schedules for each TPP member, so these graphs reflect only US-Japan bilateral tariff schedules. Bilateral export values are for 2014. Source: TPP tariff schedules; trade data from UN Comtrade.

Shooting Ourselves in the Hoof