PIIE Chart: The Evolution of Foreign Investment in Vietnam

At the end of June, the Vietnamese government announced plans to eliminate its current 49 percent cap on foreign ownership of listed companies. While this move only extends to companies that are not in sectors considered vital for national security, it represents a larger liberalization than what was anticipated—an increase to a 60 percent cap on foreign ownership—and is aimed at boosting foreign investment in the country.

The chart shows the growth in state, non-state and foreign investment in Vietnam relative to 1995 levels. While foreign investment growth has fallen behind growth in state and private funding, there was a surge between 2006 and 2007. Two factors may help explain this jump. First, in 2005, Vietnam passed a new package of enterprise and investment laws, which regulated investment activities as well as provided a framework for investor rights and guarantees against nationalization of investor assets. Second, Vietnam became a member of the World Trade Organization (WTO) in 2007. While the recent lifting of the limit on foreign ownership is in itself a smaller step than the broader reforms associated with WTO membership, it does mark another move towards integrating Vietnam into the world economy. Moreover, it compliments Vietnamese efforts to privatize SOEs and liberalize trade and investment through the Trans-Pacific Partnership (TPP). 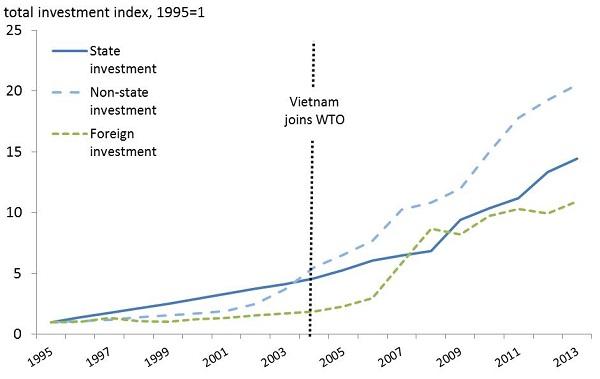 At Long Last, A China-Australia FTA