Most developing economies reduced tariffs voluntarily, not because of trade agreements 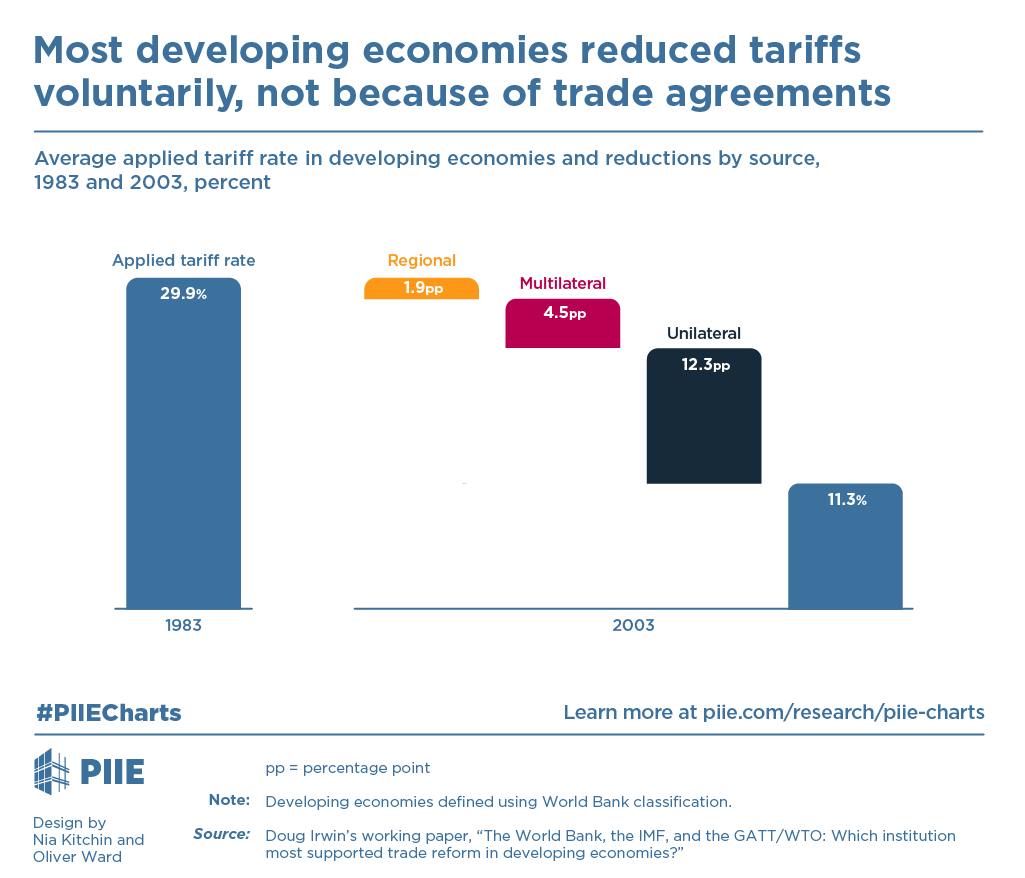 Developing countries liberalized trade dramatically in the late 1980s and early 1990s. This was a period in which China, India, and other previously closed economies opened up to world trade. Multilateral institutions supported and encouraged these reform efforts, but the key actors were the officials in finance ministries and central banks in the countries that liberalized. Most of the reductions in trade barriers were made unilaterally, often in the midst of an economic crisis, not in the context of trade agreements with other countries.

The weighted average applied tariff among developing economies fell from 29.9 percent in 1983 to 11.3 percent in 2003. Two-thirds of the reduction came from unilateral actions undertaken voluntarily, a quarter came from multilateral trade negotiations, and around a tenth came from regional trade agreement negotiations.

The General Agreement on Tariffs and Trade (GATT), a precursor to the World Trade Organization (WTO), was established in 1947 to facilitate free trade and reduce trade barriers. One might suspect it was a driving force behind tariff reductions, but its impact was in fact limited. Developing countries made tariff concessions during the Uruguay Round of GATT negotiations (1986–94), but the bound tariffs—the maximum permissible tariff rates—that they reduced in those negotiations were much higher than the applied tariff rates already in effect. As a result, the negotiated tariff reductions had little immediate impact on trade.

The World Bank and the International Monetary Fund also had a limited impact on trade policy reform.

This PIIE Chart is based on Doug Irwin's Working Paper, The World Bank, the IMF, and the GATT/WTO: Which institution most supported trade reform in developing economies? Produced and designed by Nia Kitchin and Oliver Ward.